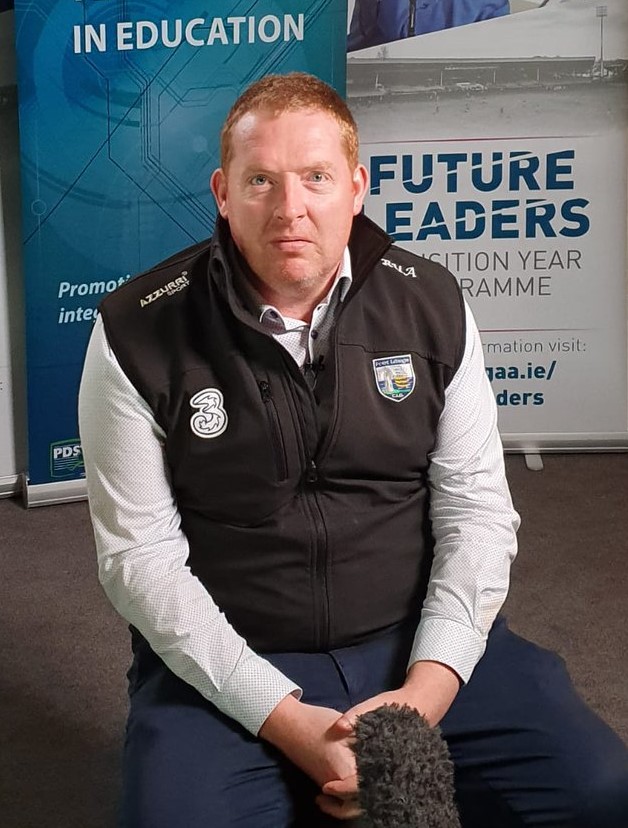 Tomás Rua Ó Cadhla was involved in performance analysis with the Waterford senior hurlers in their run to the 2017 All-Ireland Final as well as with the Wexford footballers who reached the 2008 All-Ireland Football Semi-Final.

TOMÁS ‘Rua’ Ó Cadhla is a great man for the chat. I should know. On more than one occasion over the years, be it at one of many GAA grounds where our paths have crossed or over a sociable at an awards banquet or dinner dance, we’ve ruminated, debated and laughed. A lot!

Born in Waterford in 1981, the son of John Kiely of Knockateemore (“in the parish of Abbeyside”) and Mary Kiely (nee Walsh of Murphy Place, Abbeyside), Tomás is the eldest of his flock, which also includes Seanie, Siobhan and Ailish.

“I suppose every oldest child is an experiment,” a grinning Rua declares via Facetime while strolling around the Kiely homestead, where he’s been based since mid-March due to the public health emergency.

“When I was starting to go out, there was always a chore in, how can I best put it, ‘securing the paperwork’ to get out whereas by the time Ailish came along 10 years later, things had probably got easier for the rest of the lads as time moved on. I suppose it’s always that bit different when you’re the oldest.”

Tomás’s first few months were spent in An Rinn while John and Mary’s new house was being finished at the time.

“I probably still have a bit of Ring in me,” he said, with a trademark grin slowing breaking open. “My Grandmother (on his mother’s side) was from Ring while my Grandfather’s people were from over there in Dungarvan – now that’s a heritage those of us fond of our Abbeyside Ballinacourty (GAA) colours wouldn’t be bolting out of the blocks to lay claim to!”

Tomás, who currently works with Gael Linn, the national body which promotes the Irish language, attributes his initial interest in Gaeilge to his Granny.

“It would have been a ritual every Saturday to have our Grandmother bring us out to Ring for a spin so we’d go to the relatives’ houses out there; my uncle – her son – would have been living there at the time, my grandaunt would have been in Ring as well as lots of other relatives. And you’d have heard the Irish being used over there all of the time, not in particular from the relatives when we visited but you heard it being spoken in Ring, you’d have had an awareness of it being there and being something that was used on a daily basis.”

He continued: “I went to the National School in Abbeyside before I headed across the water to the Christian Brothers in Dungarvan, where Séamus Ó Rodaigh was one of our Irish teachers and he probably had more of a bigger influence on me than anyone when it came to developing an interest in Irish. In the last few weeks at home I’m after rooting out some old school stuff, and I’ve found notes for an Irish debate with Gael Linn, whom I’m working for now. Myself and a few lads from Ring ended up getting beaten in an All-Ireland semi-final by a team that was captained by Evanne Ní Chuilinn, now on RTE News, of course.”

Just a week after completing his Leaving Certificate, aged 17, Rua got a job at Coláiste na Rinne “on the summer courses and I can safely say I’ve been working there ever since – I ended up being Operations Manager there for 12 years.”

Beyond the Leaving, Tomás studied General Nursing at Dublin’s Beaumont Hospital, beginning in September 1999 before broadening his speciality skills via a Neurosurgeon/Intensive Care module he entered at the age of 20.

“I did that until 2006… ironically in the last few weeks I’ve been asked to go back on a part-time basis. So I’ve re-registered and am due to start next Wednesday (May 6) and if it’s something I need to do, then of course I’ll do it. And if I do, I’ll be back into an Intensive Care Unit (ICU).”

The increasing demands of Rua’s performance analysis (‘the stats’) at inter-county GAA level led to a career course correction.

“Being involved with the club and the county the way I became over the years, the job just wasn’t fitting in; I’d be working a week of nights from Monday to Monday when I’d be there on many a Sunday morning, sat in the car, heading off to Thurles, knowing I needed to be back in Dublin for eight o’clock that evening. It was getting to the stage when I didn’t see how I could work on Sundays anymore, when everyone else was mad to do Sundays because it was double time. So I made the change, ended up with the Blood Transfusion Board for what only ended up being 11 weeks (taking platelets at St James’s Hospital). Four weeks in, the Operations Manager’s job in Ring came up – and that was an opportunity I couldn’t turn down. Gael Linn came calling in 2018, where I’m involved in the debating competition that I used to be a part of and I’m also involved in music competitions and a summer football competition for the Gaelscoileanna and the Scoil na Gaeltachta around the country, which we can’t do this year, of course.”

As for life on the Gaelic Games front, Rua’s attention to detail has been availed of by Déise GAA luminaries, including John ‘Jackson’ Kiely, Jason Ryan during his time as Wexford senior football manager and former Waterford hurling boss Derek McGrath.

“It started off with first aid with Jackson back in 2003; (the late) Greg Fives at Abbeyside (1949-2008) asked me to help out with a few different teams in the club and I loved that side of things pretty much from the first time Greg asked for a hand. And it just went from there, the great characters you’d meet, the brilliant stories that’d be spun while doing a bit of serious work at the same time in terms of developing presentation and analysis methods at inter-county level. And to end up working with Jason and a Wexford team that reached an All-Ireland Football Semi-Final (in 2008), with Sean Power and the group of hurlers that won the Minor and Under-21 All-Irelands and all that Derek brought to the table, coming within a whisker of that Senior All-Ireland in 2017, sure you could only be proud of that. Great times with great people.”

In addition, Tomás is also a volunteer helmsman with the Helvick Head RNLI Lifeboat crew, a role he clearly relishes.

“An uncle of mine was involved in the re-opening of the station back in the mid-90s and was its honorary secretary when it got up and running again,” he said.

“So when I got the job in the (Irish) college, I was asked would I get involved due to the fact that I was coming into work in the area during the day while some of the other crew would be leaving to work in Dungarvan. It’s been a good fit for me and it’s something I really enjoy being a part of.”

One last question: where did ‘Rua’ originate as a nickname? “Well, that goes back to Séamus Ó Rodaigh in the (Christian) Brothers in Dungarvan. When we were doing Irish in school with Séamus, he never used any English during the Irish class – everything was done through Irish – and there were two Tomás’s in the class. The other fella, who’s a distant cousin of mine, had dark hair so be became Tomás Dubh and I became Tomás Rua. Dubh didn’t stick with him but Rua stuck with me and that explains that!” 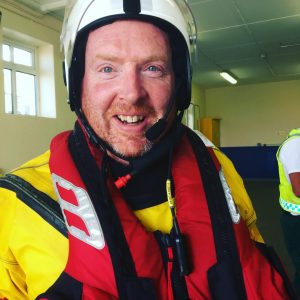 Rua is also a volunteer helmsman with the Helvick Head RNLI Lifeboat crew.