Diary From A Social Distance: Monday, May 11 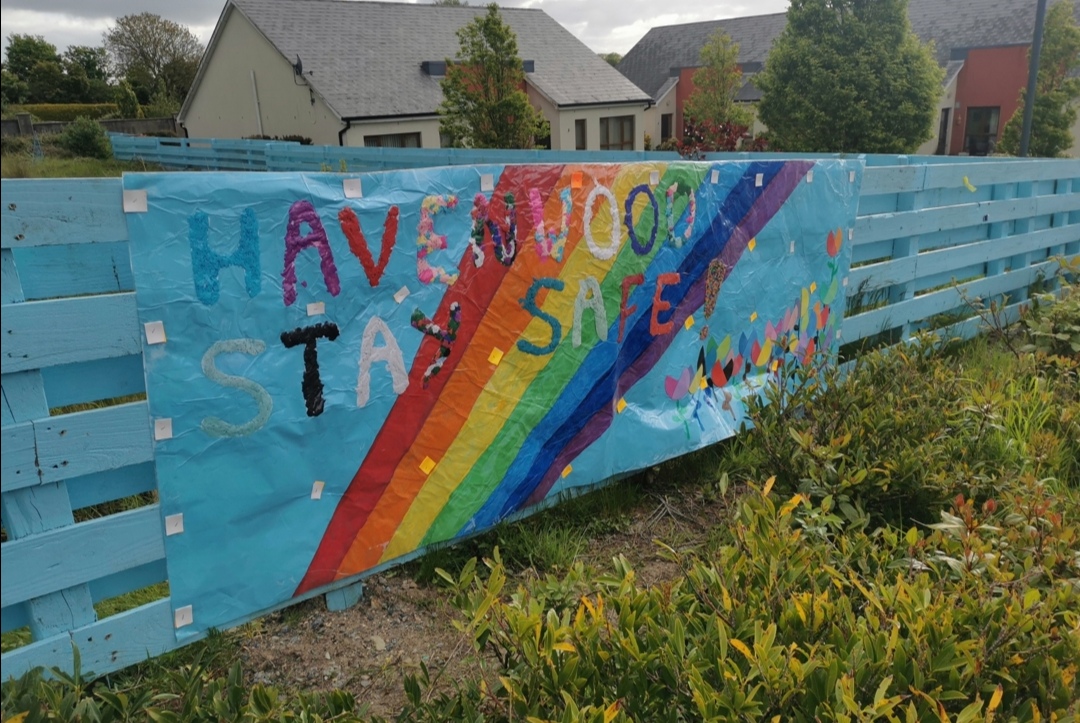 8:07am-8:57am: I bring Buddy and Zippy off on another five-kilometre walk, the ideal way to kick off what is generally the busiest day of the week from a writing perspective. Granted, the editorial goalposts have shifted somewhat in recent weeks given the smaller size of our print edition and the earlier Monday evening deadline, but any copy that doesn’t make newsprint today will be used online today or in the coming days. I think we’ve all managed to keep filing copy in a regular way for the past months very conscientiously and I’m proud to be part of such an excellent team effort. The 5k walk is becoming a regular feature of my mornings and that I am glad of. A beautifully designed new sign displayed outside Havenwood Nursing Home features a rainbow, flowers and a supportive slogan: ‘Havenwood Stay Safe’. I’m relieved that my own Grandparents didn’t live through so fraught a period for the elderly and vulnerable. 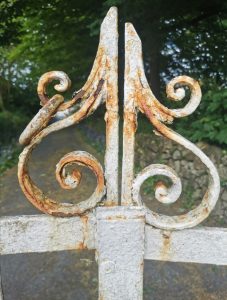 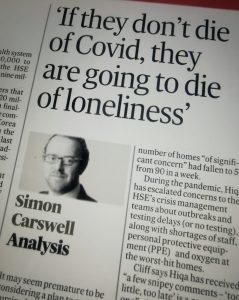 10:39am: After filing two pieces of copy, including my truncated version of the past week of diary entries, a moving story by Simon Carswell in today’s Irish Times grabs my attention. In a reference to Susan Cliff, the deputy chief inspector of the Health Information and Quality Authority (HIQA), Carswell writes: “One Hiqa inspector was told of the toll the lockdown was taking on elderly residents who had not had a visit in two months. ‘The provider said that if they don’t die of Covid, they are going to die of loneliness. That was a genuine concern,’ said Cliff.” It’s hard to credit that this is what some of our most elderly citizens are facing in 2020.

2:58pm: I file a piece online about David Cullinane’s being – at the time of writing – the only candidate declared as a nominee for the new Oireachtas Special Committee on Covid-19 Response. Interestingly, the 19-member committee also features Waterford TDs Mary Butler and Matt Shanahan, meaning our constituency is, by any measure, over-represented in this group. But for someone in a job like mine having three of our four TDs on such a body will surely prove useful from a story generating perspective.

There’s speculation that Social Democrats co-leader Róisín Shorthall may also allow her name to go forward for the role. The Irish Times reports that “most parties agree the role should be chosen by consensus and that a row over the position would be a bad start to its work”. But the current state of play certainly doesn’t mean that Deputy Cullinane will end up chairing this committee. Nonetheless, it will be worth tuning into tomorrow’s meeting to see how thing play out.

Time out with the dogs having made the last post of the day just in time!

4:48pm: Having taken a little longer than expected to file copy 20-plus minutes previously, joined by herself and our two dogs, I get to hand my latest handwritten offering directly to the postman who is emptying the post box at Viewmount. In glorious sunshine, I delightedly hand over the letter to the friendly postie. It says much for the times we live in that this particular transaction might just have made my day.

But do you know what? Taking pleasure in something as utterly straight forward as this is incredibly pleasing. The reward I’ve gleaned from my revived level of handwriting has been tremendously consoling. It’s a hobby I’m committed to retaining whenever we resume some level of normalcy. I should have always made time for writing like this. The four of us walk back home, enjoying the sun and each other’s company. Buddy behaves himself almost the entire time. The heat certainly blunts his more excitable edges.

5:39pm: I’ve not had a chance to look through my Irish Independent e-paper until now and, as is often the case when flicking through any paper, one of the smaller stories proves of great interest. “Bottles of olive oil are flying off supermarket shelves as we all spend more time and in the kitchen,” writes Fiona Dillon. “SuperValu has released a breakdown of the products and categories that have been selling strongly in it stores since the Covid-19 lockdown began, and it has reported an 80pc increase in olive oil sales. Meanwhile, the need to clean up more often in the kitchen has seen a 60pc rise in sales of dishwasher tablets. There has been renewed interest in baking and sales in this category have risen, most notably with flour products up 200pc.”

6:08pm-7:33pm: I compile my Sunday diary entry and then post it online. I may be winding down this series sooner rather than later and there’ll probably be a little more clarity about it come the end of the week. I know it will have to come an end at some stage this summer but since I may be working from home for another few months yet, it may still retain some worth even as other professions resume to some level of normalcy. But like all God’s people, I know my place in the choir so what will be will be. Sure I’ll just find something else to write!

10:18pm: Writing in the London Times about Zoom (bloody, infernal Zoom), Emma Duncan refers to the pre-pandemic “chasm between our professional and personal lives. In the former, we have to be restrained and unemotional; the more powerful bits of ourselves – anger and love – must be confined to the latter. That works when those two selves live in different buildings: the besuited professional goes to the office in the morning, and the animal is let out in the evening, in bars or at home. But now our computers’ cameras get to nose around in our homes, occasionally catching a glimpse of the beast in its den. It’s not always a pretty sight.”

Zoom’s novelty, at least from a work perspective, has long since worn off for me. We didn’t have 40-minute meetings in the office every day at noon, after all. For me, less is most definitely more when it come to the app 99 per cent of the planet was unaware of back in ancient times: as in last February. Last February of this year, just to be clear.

11:03pm: I run 6.59 kilometres (4.1 miles) in 37 minutes, 37 seconds, adding a few yards to my regular anti-social trotting route, passing only four pedestrians until I am surprisingly met by herself and a bouncing Zippy. There are many things about the past eight week which remain difficult to reconcile one’s self with, but getting fitter has certainly been a help in the midst of all this. While I’m out, Donald Trump makes a jackass out of himself again and literally walks away from two female reporters asking him questions which, by the rationale of most human beings with intelligence, aren’t remotely “nasty”. When I get back into the kitchen, the Rolling Stones’ new tune, ‘Living In A Ghost Town’, is playing on Radio One’s enchanting ‘Late Date’. It’s an absolutely cracking tune.