Martina Collender: The medicine of laughter 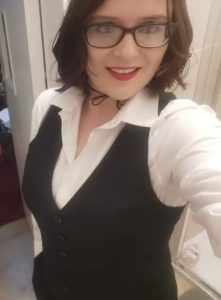 “GOOD girl.” Two words to ensure that the fiery side to Waterford playwright, Martina Collender, will be seen. “I live by a simple premise, if you wouldn’t say it to a man, don’t say it to a woman.”

I just knew from the outset that this was going to be an interesting conversation, and over the course of our chat, I was not disappointed.

Growing up in, what was then, a much quieter Kilmacthomas, such liberal views would surely have caused a splash when Martina attended St. Declan’s secondary school, yet surprisingly, Martina was observant and quiet, finding the school environment not conducive to creativity.

“I was what you might call a loner, I didn’t have friends or a group as such.”

Overwhelmed by the school environment, and finding no place in the walls where she felt she fit, it is not surprising that when Martina started to write, coming of age plays were high on her list of successful plays.

“I felt that the coming of age novels out at the time were concerning someone who was dead or someone who was dying, like The Fault in Our Stars. Even though it was a great book, I just didn’t think it was relatable. I felt that 17-year-olds needed to see themselves represented. Writing for young people allows you to step back into that world without reliving it.”

For Martina, stepping back into the world was to step into a world of regret, a world where she didn’t always like herself, and certainly one where she felt misunderstood. Fighting against the structure of school, coupled with undiagnosed dyslexia, she found herself acting out and in a negative headspace for what is supposed to be the best days of your life.

Ben Hennessey and Red Kettle gave Martina a platform to deliver her work when he produced her first full length adult play, Lover’s Dust. This was followed by 1,000 Breaths, a coming of age story which was received well by audiences, in association with Waterford Youth Arts and Liam Meagher.

“I remember people telling me age old cliches at the time, like ‘oh this will get better’, and I just wanted to shout, they won’t get better. I wanted to represent that on stage, to allow young people to feel heard. If I can do it through humour, then that’s even better.”

Her humour is a dark, dry wit, best placed to deliver a whippet-fast line in conversation, or in a play as opposed to comedy in the traditional sense. 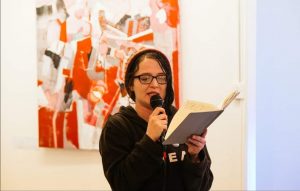 “I try to laugh at everything in life, including at myself, maybe mostly at myself.”

Laughter as a self-prescribed medicine has steered her through the darkness of anxiety, including the difficult terrain of a breakdown just before Christmas.

She delivers this information to me with a bright smile, emphasising how little she dwells on the negative and how eagerly she moves forwards.

For many who suffer with anxiety, the social restrictions currently imposed are posing a tough challenge to surmount.

“I think what is upsetting people the most at the moment is the idea that people are dying alone, that the cases diagnosed are rising each day and I think it’s only natural that people are suffering with anxiety on some level.”

That idea of being alone is one of the main reasons Martina embraced her talents as a playwright and creative writing facilitator, because at any one time, the theatre is filled with buzz and people and activity. Being creative in another writing capacity, for example a novelist, is a lonely endeavour, which would not have been right for Martina. For her art to make a difference, she needs to be in the conditions which are right for her.

Also filled with buzz, people and activity is her day to day. An impressive list of accolades follows the Waterford playwright, from stage manager to playwright, creative writing tutor to commissioned artist, and most recently international playwright, as the rights to her play ‘Still, We Sing’ have been snapped up in Poland.

“I’m not really that busy, it just sounds that way when you put it all together.”

Yet it is clear that Martina Collender is not just busy, she is busy making a difference. She is fast to point out gender inequalities to her class of creative nine-year-olds, simply because there were both girls and boys present and her experience as an integral part of the Repeal the Eighth campaign in Waterford allowed her to see the importance of speaking out.

“Bravery is a really important value to me. I think bravery is different for everyone, for some young people, bravery is waking up every day, and for others, bravery is hearing a sexist comment and having the courage to speak out against it or to let it slide, depending on the situation.”

That bravery has cemented her relationship with her family, and particularly her sister, Mary. Martina beams when she speaks of her sister’s kindness and maternal nature towards her, and of their happy childhood with their many cats, and their beloved dog.

“What makes me happy? Dogs. I watch them on Netflix, on Youtube, I think people can learn so much from dogs, from just enjoying life and being loyal.”

Squirreled away in Kilmacthomas in the only corner of the house with reliable internet coverage, there is no sense at all that this extraordinary, humble and quirky woman with the pixie haircut has sold international rights to a play, and is changing the world one person at a time, through her words.

“I didn’t go on to college like others in my year did, and I am living my own dream every single day. Today’s teenagers are shouldering such weighty pressure, and at 17, who can even make those kinds of decisions? Most people don’t even remember their grades, place greater importance on yourself, not on those grades.”

She is smiley, fidgety, chatty, honest to a blunt edge, and endearing. She is raw talent, fresh from the oven.