Normal People: Sex, and the promise of social acceptance 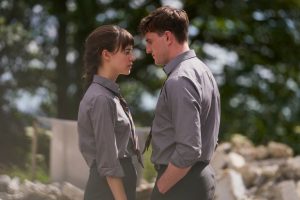 In Carricklea, Co. Sligo, Marianne and Connell are on opposite sides of a socio-economic chasm. Publicly, this chasm keeps them separate but privately they blossom in the intimate glow of their friendship. At school Connell is well liked and his reputation is cemented among his peers; whereas Marianne remains detached from groups, an unhappy Proust reading pariah in uncomfortable terrain.

‘He would have betrayed any confidence, any kindness, for the promise of social acceptance’

Sally Rooney shows extraordinary insight and understanding into the limitations of social development in school. This is portrayed through the effective use of camera pan-angle, close-up shots and staccatoed speech, as directed by Lenny Abrahamson in the 12-part series which will continue on Tuesday at 10.15pm on RTÉ.  Invisible societal rules ensure that social acceptance is only possible for those who are willing to pursue it and prioritise it; this is what Connell did.

The novel follows the development of Marianne and Connell over four years as they step out of the familiarity of school and into the polished world of Trinity College. A role reversal takes place and Marianne sheds the skin of Carricklea to emerge as a social powerhouse. Connell sags under the weight of the unfamiliar and the economic difference widens, a gaping hole between them.

In school, we are superficial and selfish. We are too young to be anything else. We collect relationships and friendships like coloured socks, discarding them when they become worn and the lustre of novelty has worn off. The heaving classrooms leave no room for individuality so we conform and we leave behind those who do not.

Sally Rooney understands this about us; she reshapes all of us at age seventeen and forces us to walk the long school halls again.

Marianne possesses a rare inner strength which allows her to appear wise beyond her years. This wisdom can take the guise of coldness and it is only much later in the novel that we see this coldness stems from a home built on fear and violence. Connell is publicly distant toward Marianne, not brave enough to sacrifice social acceptance for the blurred lines of a friendship. Yet something spectacular emerges from these blurred lines; a raw honesty develops between both characters, a safe place of truth, sexual exploration and acceptance.

At this point in the novel, the pages become littered with Trinity students, cloaked in money and prospects. With age comes less of a need for peer acceptance for Connell but an ever growing awareness of the economic differences between them and him. Marianne flourishes away from home with a deep reluctance to return, whereas Connell craves the intimacy of the Sligo surrounds and their relationship flounders and reignites repeatedly.

We owe it to ourselves to read this book. We used others or allowed them to use us. We prioritised reputations over friendships. We persevered in school because we knew that what awaited us at home was far worse. The cruelty Rooney depicts, in hindsight, is a subtle undercurrent in the entire novel. Rooney speaks effortlessly for each and every one of us and in doing so, crafts a multilayered character who steps from the past into the future, damaged but beautiful.

Journalist Dymphna Nugent contributes book reviews to the Waterford News & Star, the Irish Examiner, and blogs at The Book Nook on Facebook