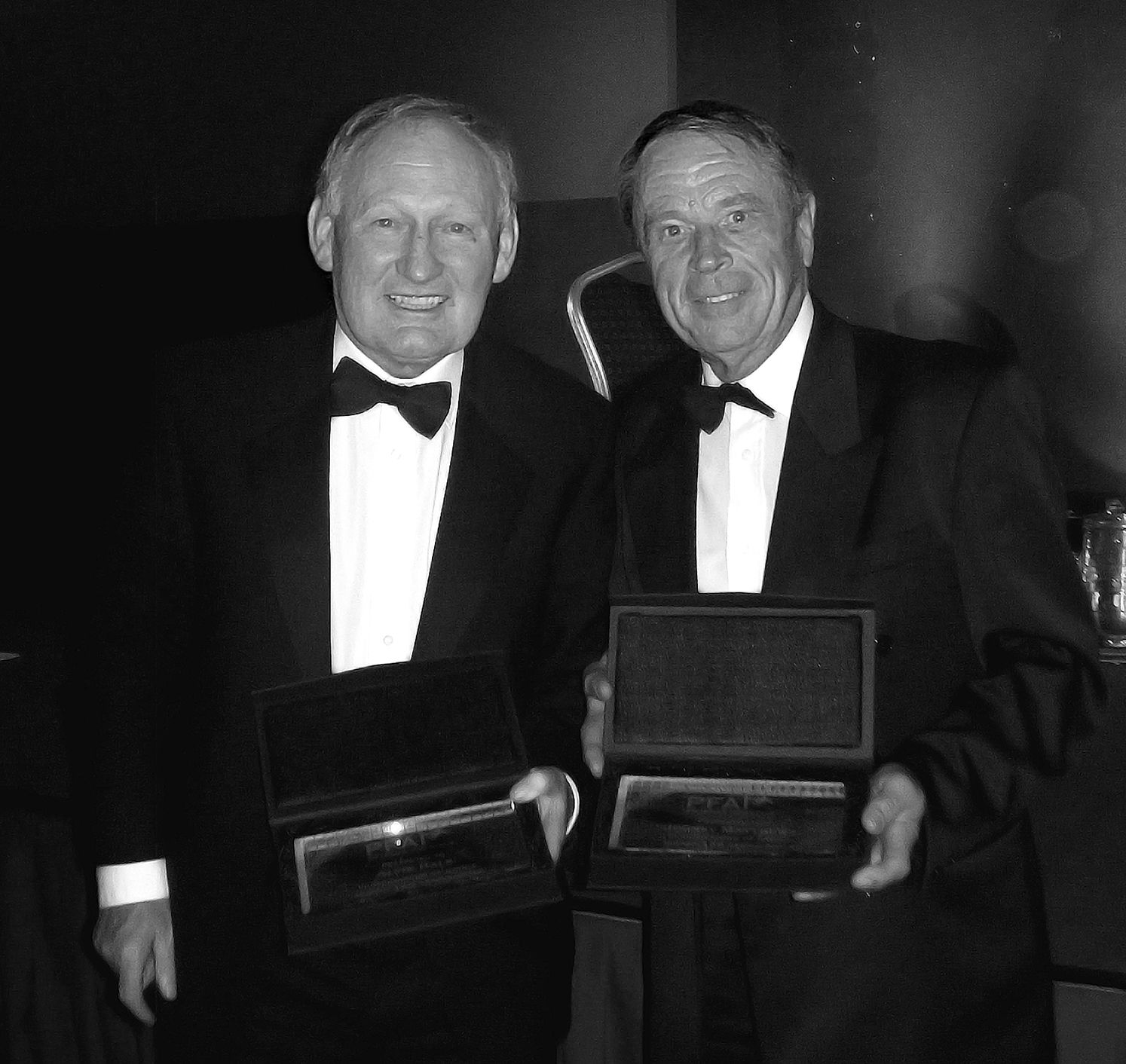 Alfie with his good pal and former Waterford FC team-mate Johnny Matthews (RIP) when both were honoured by the FAI for thier goalscoring records in League of Ireland football.

Alfie Hale comes from one of the most famous footballing families in Waterford.
Having come to prominence with St. Josephs FC on the local scene, he joined Waterford FC as a 17 year-old in 1956, where he joined up with three already established Blues stars……his brothers Georgie, Dixie and Harry.
Alfie quickly established himself as an exceptional talent and showed a goalscoring flair which brought scouts from all the top clubs in England flooding to Kilcohan Park. In the 1958/59 season Alfie got off to a flying start on his League of Ireland debut, hitting 18 goals in 22 League games, the second highest goal scorer in the League of Ireland behind Donal Leahy of Evergreen (Cork). 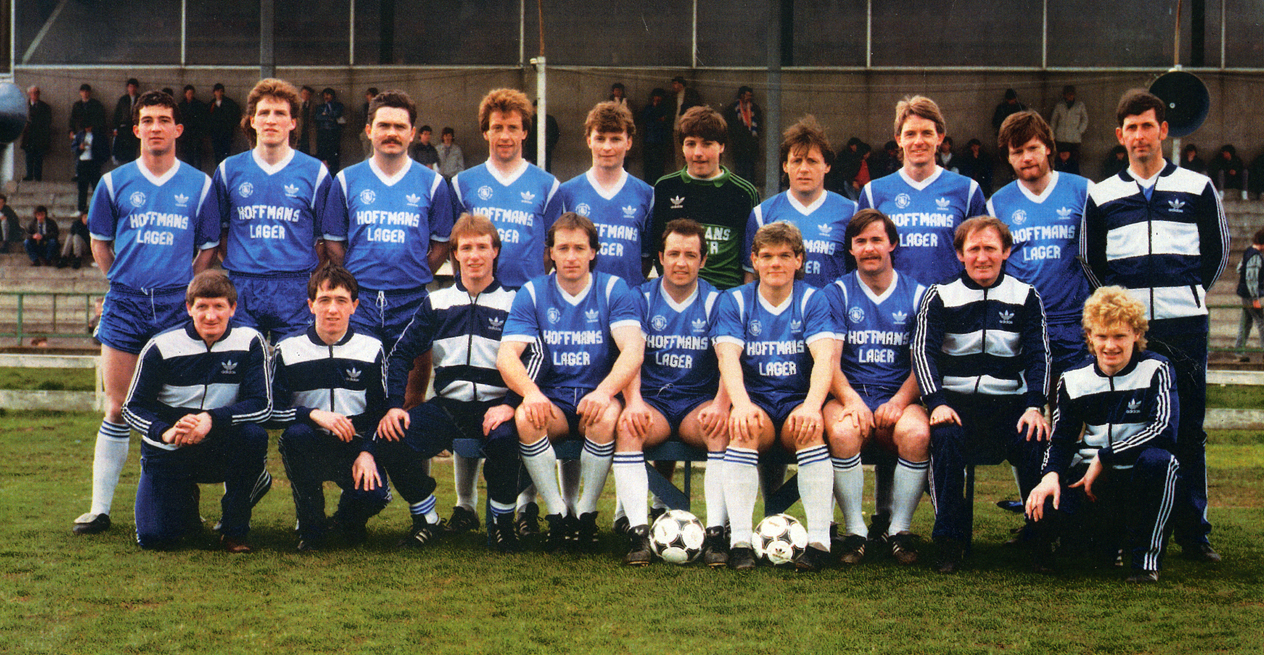 Alfie Hale took over as Waterford United manager in 1982. This is the Waterford United team that won the FAI League Cup in 1985 and reached the FAI Cup Final in 1986 beaten by Shamrock Rovers but qualified for the European Cup winners Cup.

BOUND
In 1960, Alfie signed for Aston Villa, but after limited appearances and almost three season, he moved onto Doncaster Rovers where he spent two and a half seasons scoring 42 goals in a 119 games. He then moved to Newport County, scoring 21 goals in 34 games his best season in the English Leagues.
Although he spent nearly seven years in England, Alfie never truly settled and homesickness was a consistent issue for him. The professional game was a real culture shock and there was little understanding of the difficulties faced by young players trying to adjust to the expectations of a top club. It was ‘dog eat dog’ and there was no mercy shown. If a player didn’t match up to the demands, then he was out. Alfie was confident in his own ability and improved as a player and developed the mental toughness to survive in the professional game.
Villa manager Joe Mercer never wanted Alfie to leave but with the team dominated by older seasoned pros, his hand was forced. Although he didn’t get many opportunities at first team level, Alfie played against the famous Spurs double winning team, and scored on his debut against Gordon Banks and scored on his FA Cup debut against Huddersfield Town.
Alfie moved onto Doncaster Rovers but not before Don Revie made made a move to bring him to Leeds United. It was at Newport County that Alfie began to bring all the aspects of play that he had picked up at Villa and Doncaster. Newport manager Billy Lucas played Alfie off the main striker and the young Waterford lad showed his true potential. 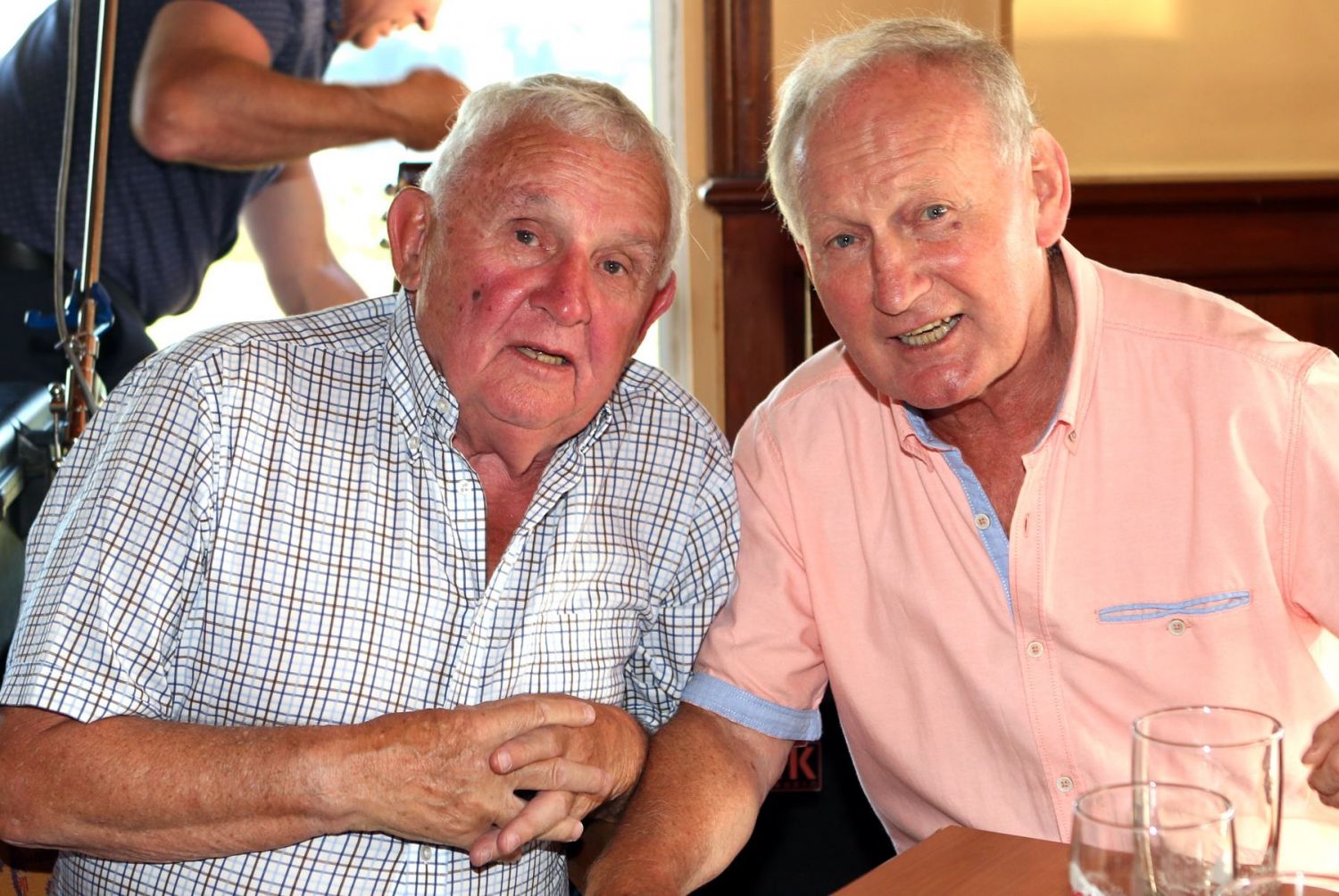 TO THE BLUES
When Alfie left the Blues for Aston Villa, Michael Bolger, the Waterford FC Secretary told him that if things didn’t work out in England, the Blues would bring him home, as soon as they had the resources.
Having won their first League in 1966, and with active support from some local businessmen, the conditions were right to bring Alfie home. At this stage Alfie was in his prime aged 26 and with a wealth of experience behind him Alfie Hale was about to enjoy unparallelled success with the Blues. Over the next eight seasons he would score 111 goals in 165 appearances. During this time he was regular on the League of Ireland Inter League team and regularly picked on the Irish International team.
One of Alfie’s most memorable seasons was in 1968/69 as the Blue s battled to retain their League title, and take on the greatest club side in Europe, the English League and defending European Champions the mighty Manchester United. The Blues were delighted to get a dream against the Champions, but it would be a daunting task to face an attacking trio of George Best, Denis Law and Bobby Charlton.
The Blues form at the start of the season was inconsistent, proberly due to the distraction of the upcoming Manchester United game. However in the Shield competition against arch rivals Cork Hibs Alfie Hale came up thumps as he hit a hat-trick in a 5-0 demolition. Manager of United Matt Busby was at the game and he acknowledged that the darting elusive Alfie Hale would be the Blues danger man against United. 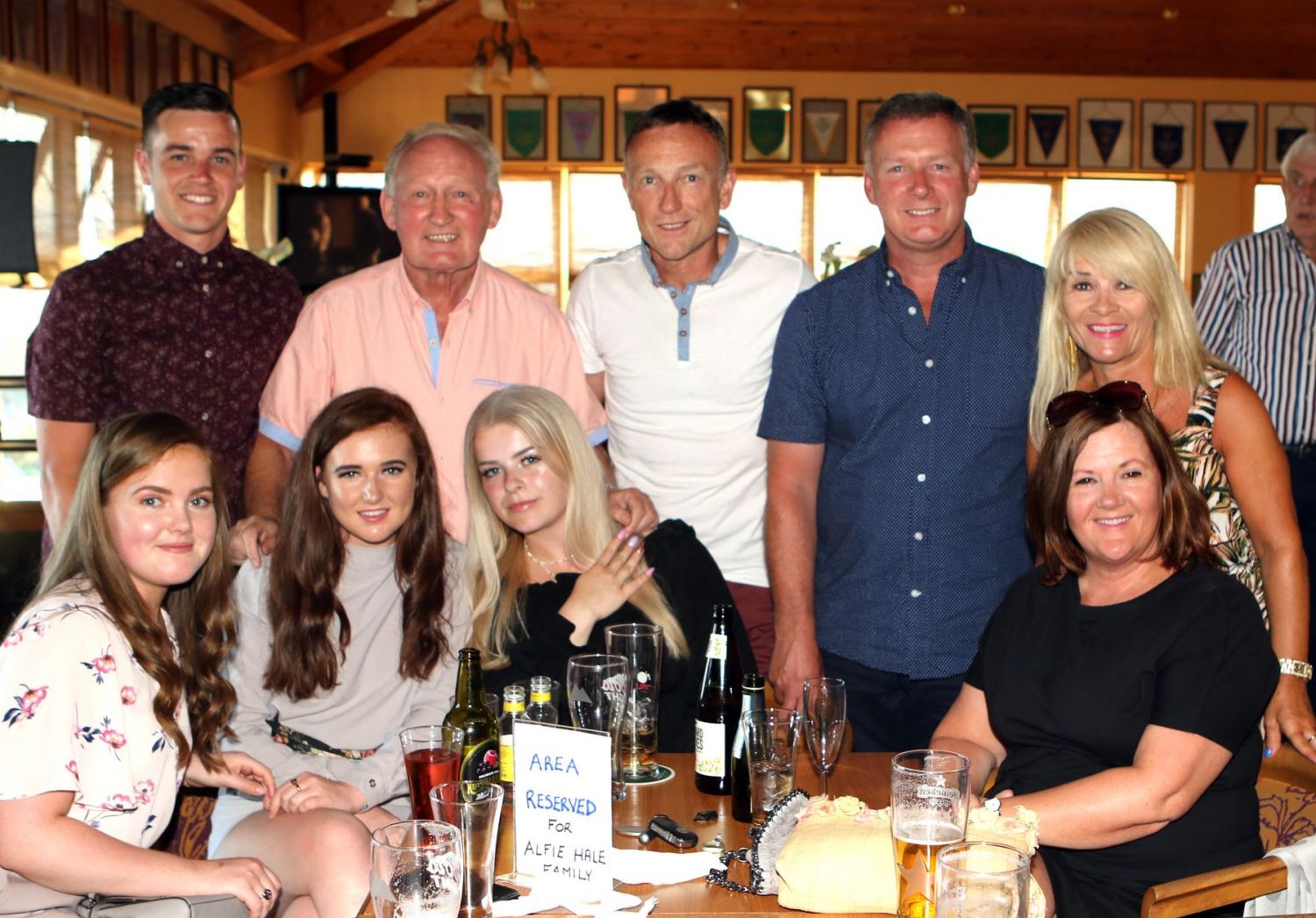 Pictured at Waterford Golf Club for Alfie Hale Day were, Alfie with sons Daryl and Dean and other family members.

THE GAME ALL OF IRELAND WANTED TO SEE
The first leg of the clash with Manchester United was played in Lansdowne Road on September the 8th 1968, with a sell out 50,000 spectators in attendance. Alfie was singled out by Matt Busby for special attention and was man marked by World Cup winner Nobby Stiles.
This game was not the first time Alfie had come across Nobby. Aflie had previously played against Stiles in the Liam Whelan Benefit game as a League of Ireland Selection took on Manchester United in Dublin. Nobby took the game very seriously and had a few kicks of the Waterford man, but Alfie put in a terrific performance and gave Nobby the slip mid way through the second half to score one of the goals of the game.
However that did not stop the United man from having another few kicks at Alfie in the European clashes. A Denis Law hat-trick decided the first leg as the gallant Blues went down by 1-3, but the performance by the Blues was widely praised with the headline ‘Proud Night For Waterford.’
Back in the Shield, the Blues beat Cork Celtic 3-1, thanks to an Alfie Hale hat-trick his second of the season. A 4-2 win over Drumconrda in the next game saw the Blues return to the top of the table.
In the return leg at Old Trafford, Waterford put in another top class performance but went down by 7-1. The headlines were equally complimentary, The Manchester Evening News read, ‘Waterford Players Win the Hearts of Manchester.’ Matt Busby added ‘Waterford are the best team I’ve seen come out of the League of Ireland in the last ten years. They showed great heart of the two game and never gave up playing a good attacking football. Just look at the reception they were given at the end of the game by our supporters.’
Back in the Shield, Waterford held a slender lead over Shamrock Rovers and Dundalk, but a 7-0 win over Limerick and a 1-4 win away to St. Pats clinched the title, their first Shield win in ten years. John O’Neill with 12 goals and Alfie with 11 were the top scorers. The Shield was not Alfie’s only focus that season, he was selected on the International team to play Austria in Dalymount Park , and Ireland came from two nil down to to draw, with Alfie scoring the equaliser with four minutes left on the clock. 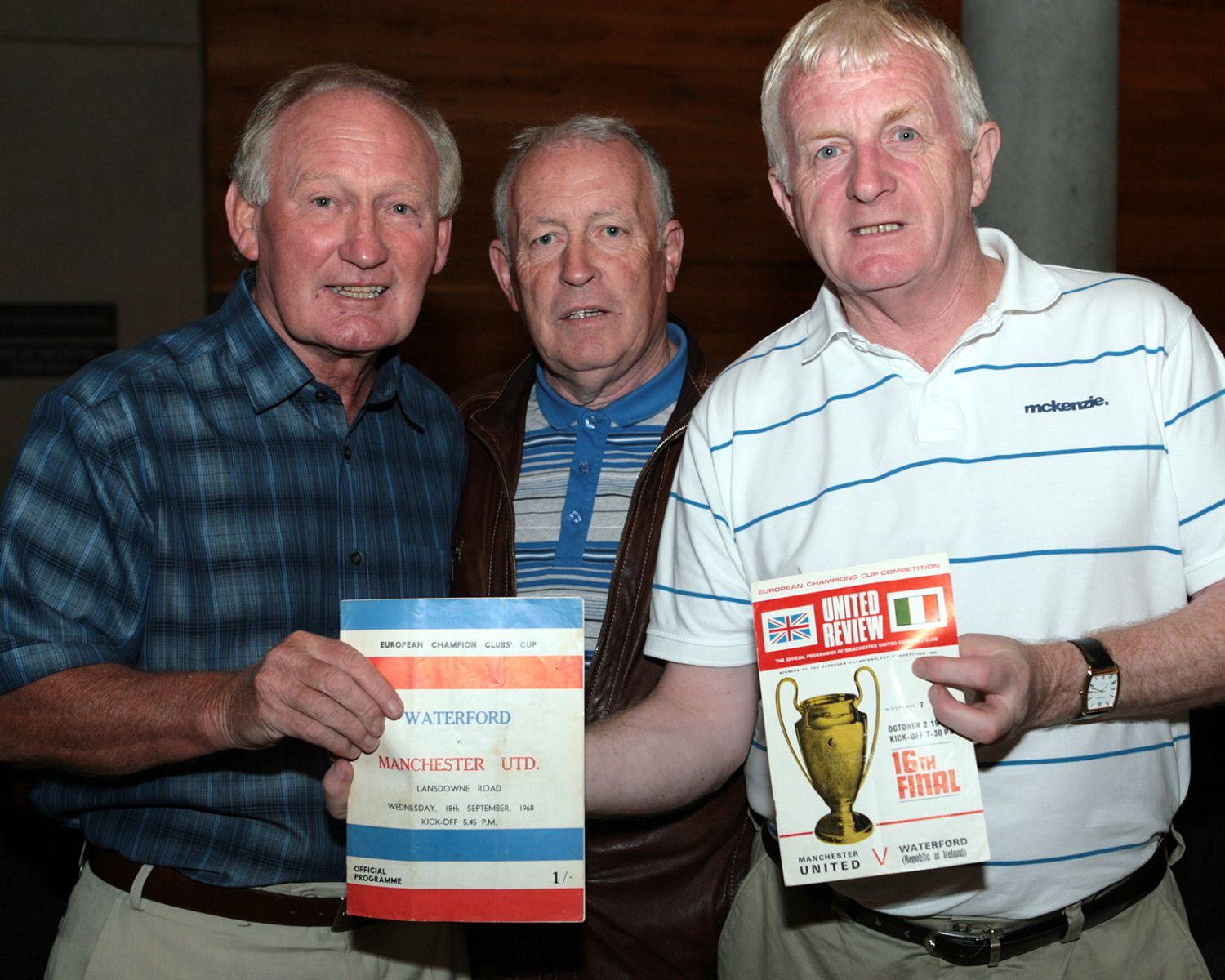 The Blues got off to a slow start in the League, with Shamrock Rovers the early leaders. Then a crunch match away to Rovers in Milltown had the potential to make or break the Blues. season, they won a thriller by 1-2 and moved into the top three. Now next in line was the daunting task, away to Cork Celtic. This was always going to be a fiery game but the Blues held out for a draw. A clash late in the game between Peter Thomas and Cork striker Donal Leahy and the home crowd baying for a penalty, but the referee waved away their claims.
When the final whistle blew the home fans were not happy, but only for a brave group of Celtic players and officials meant the Blues players were able to escaped to the dressing rooms relatively unscathed. It needed Garda reinformanents before the Blues players could leave the ground.
The Blues’ form was still inconsistent, and they signed Danny Trainor to bolster their title challenge. Their form improved and they beat Drums 6-1 with Alfie scoring another hat-trick and then beat Bohs 6-1 to shoot up the table. At this stage Rovers held a four point lead over Waterford when they came to Kilcohan Park for a crunch game. The Blues hammered them 5-1 to open up the title race.
In 1968 Michael Cogley selected his Sports Stars of the Year Awards. Alfie won it in the football section, with Willie John McBride taking
the trophy in the Rugby and Vincent O’Brien took the honours in the Horse Racing Section. Back to the League campaign Shamrock Rovers lost to Cork Hibs in Flower Lodge, but Waterford took a point in Richmond Park against St. Pats and the Blues were Champions.Alfie hit 16 goal that season three behind Dundalk’s Turlough O’Connor who was leading goalscorer. 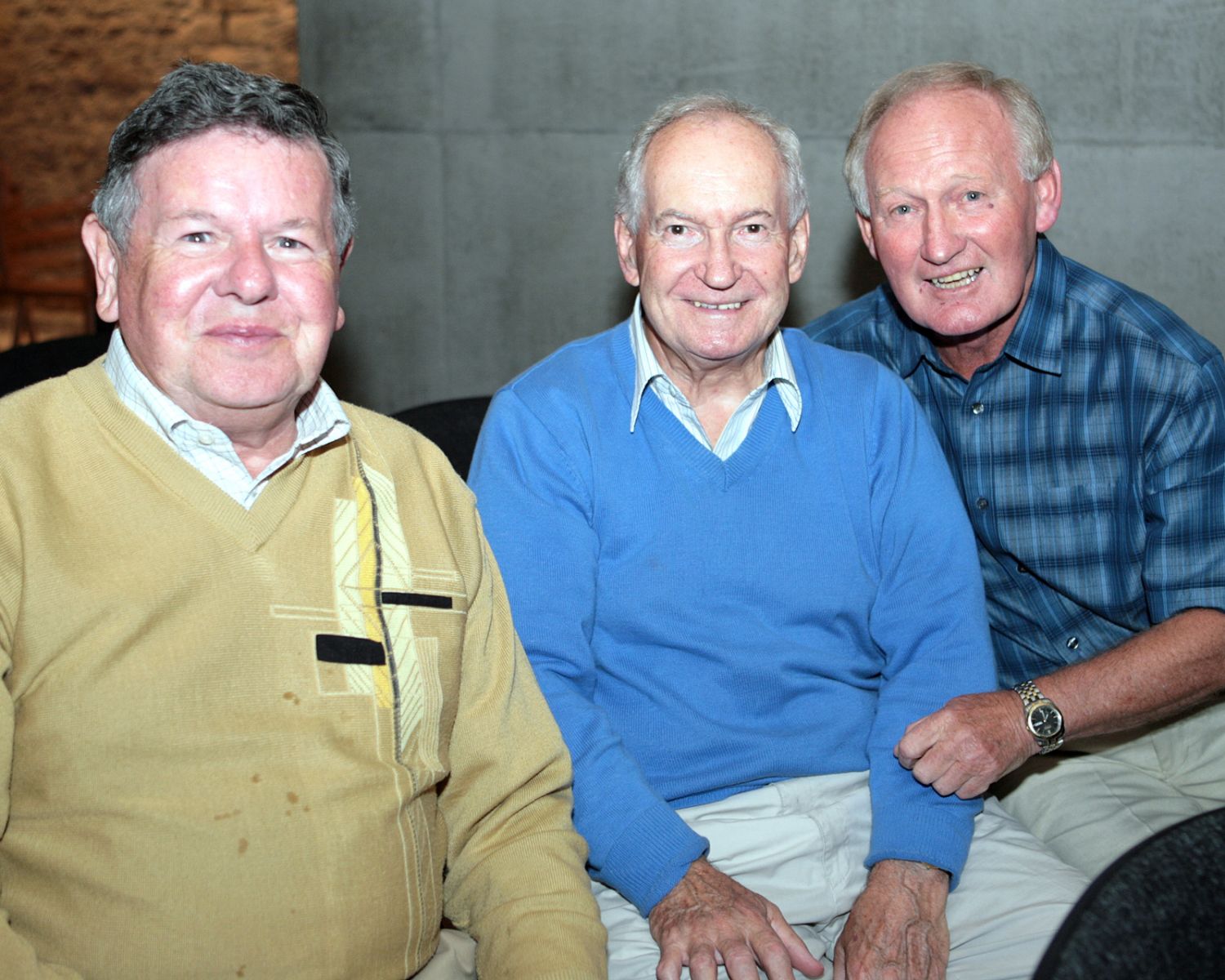 Jim Nolan, Derek Donnolly and Alfie Hale, pictured at the Waterford 1100 Talks at the Medieval Museum in 2014.

DISTINGUISHED LEAGUE OF IRELAND CAREER
Alfie’s playing career extended over a long period, and he played right into his forties. Sometimes as player/manager. He has an unmatchable record of playing in four decades in the League of Ireland.
In addition to a number of stints with Waterford, Alfie also played with Cork Hibs, Cork Celtic, St. Pats, Limerick, Thurles Town and Cobh Ramblers. He also managed Waterford, Cork Celtic, Thurles Town, Cobh Ramblers, Kilkenny City and also at local level with St. Joseph’s, Waterford Crystal and Tramore.
Alfie also introduced Roy Keane to League of Ireland football,as manager of Cobh Ramblers  He always believed in encouraging young players and he took Roy Keane on loan from Cork Celtic and played him against Waterford Crystal in a pre season friendly in 1990. He then played Roy against West Brom in Cobh, and Keane and Paul Cashin were the most impressive players on the pitch. Alfie was surprised the West Brom manager Brian Talbot showed no interest in either Keane or Cashin, so Alfie signed Keane for Cobh. Alfie had already finished his stint with Cobh before Roy Keane moved to Nottingham Forest. 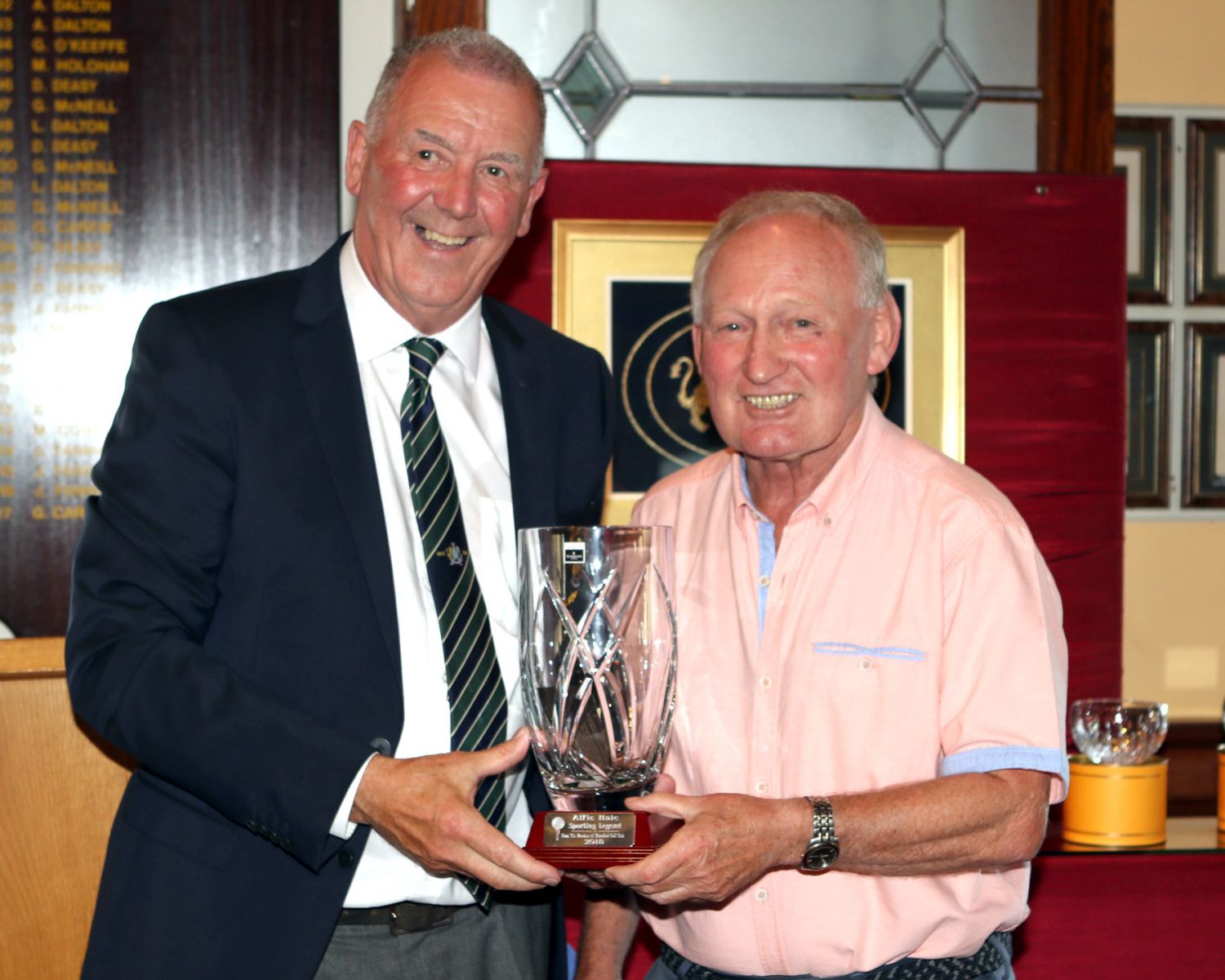 Pictured at Waterford Golf Club for Alfie Hale Day where Captain John Hayes made a presentation to Alfie to mark the day.

WATERFORD FC LEGEND
Alfie played in some memorable games but his favourites were when he played for Waterford and the Republic of Ireland. He made his debut for the Blues against Bohs on St. Patricks Day 1957 when he scored twice in a 3-1 win at Kilcohan Park. Less that 48 hours later he hit a hat-trick for the Blues against Evergreen of Cork in a 5-2 win, that game was a dream for Alfie as he got to play with his brothers Dixie and Georgie.
Another memorable game was when he was given his International debut against Austria at Dalymount Park in 1962 by Irish manager Jackie Carey. Today Alfie can found trying to improve his handicap on the golf courses of Waterford, or in his bar in Waterford City ‘Alfie Hales Bar’ on Ballybricken. Alfie never lost his love of football, on many a week end you could bump into him at a schoolboy game in Ben Wadding Park or Connors Park on a Saturday morning. He also keeps a close eye on Junior football in Graun Park or Mitchel Kennedy Park on most Sundays. Alfie was one of the best footballers Waterford ever produced and a real goalscoring Blues legend. 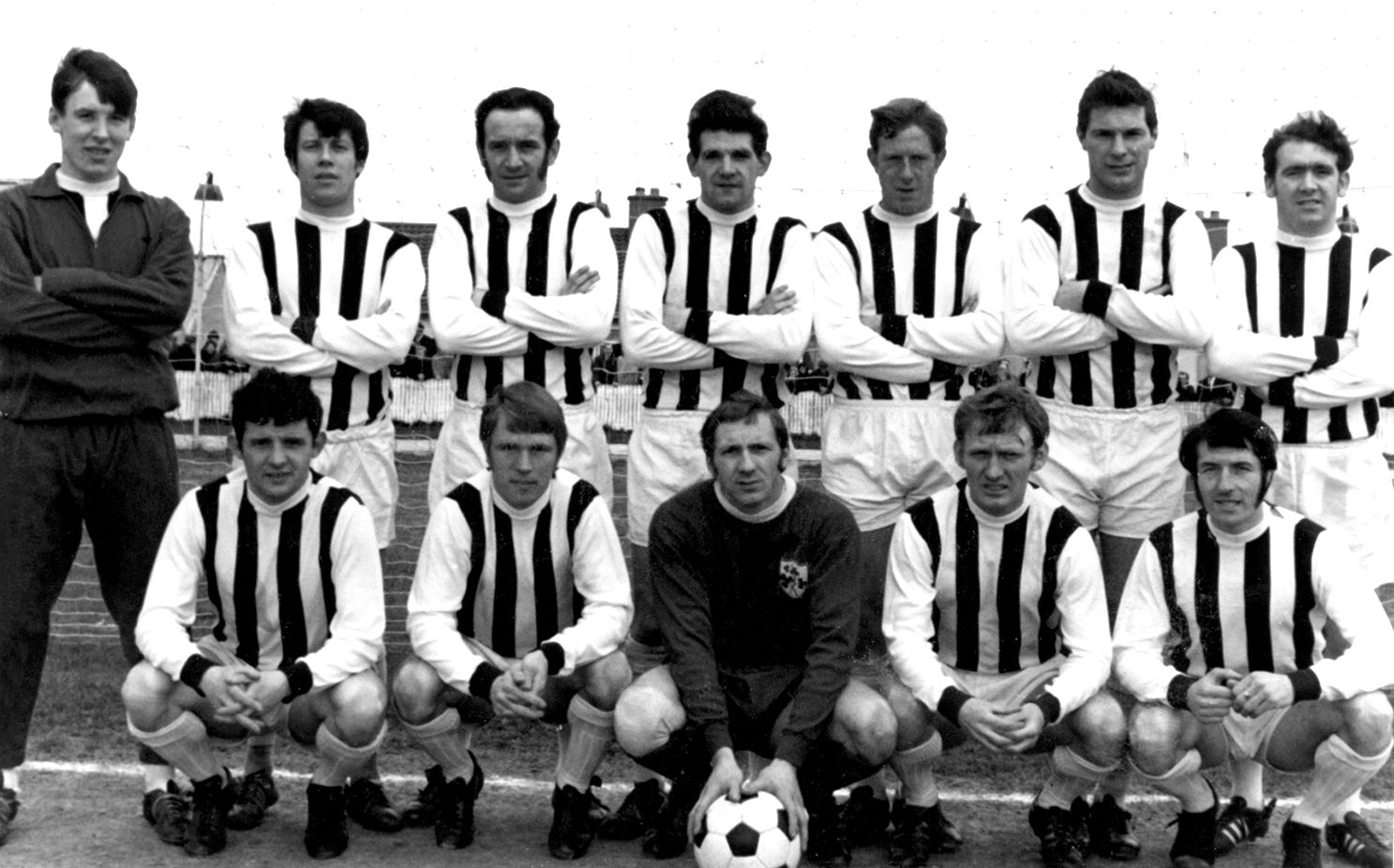