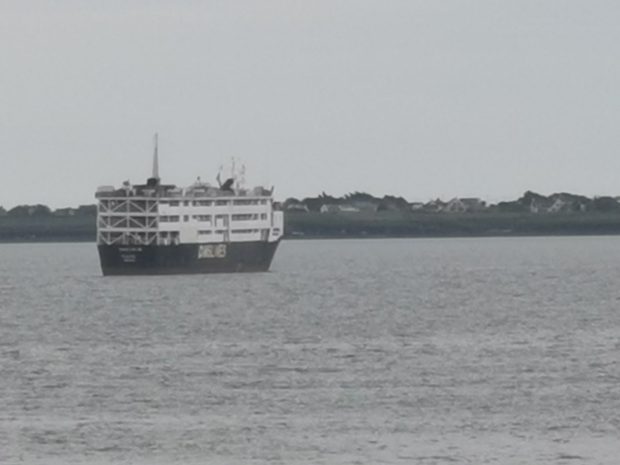 The ‘Sarah M’, which is set to sail to Algeria by the end of this week.

The ‘Sarah M’ livestock vessel, which remains anchored and empty in the Waterford Estuary off Dunmore East, now appears set to ship cattle to Algeria by the end of this week.

A statement issued this morning by Emerald Isle Beef Producers (EIBF) declared that “the recent technical difficulties regarding the shipment of cattle to Algeria have now been ironed out”.

Stating that the Sarah M is “now scheduled to head to Algeria before the end of the week,” EIBF referred to a “stalemate” between the Department of Agriculture “and the shipping company as regards procedures to be followed for the shipment”.

As the Waterford News & Star previously reported, exporters Roundwood Park Livestock and Premium Livestock postponed the shipment of bulls and bullocks (from Belview) last Friday as it didn’t have a “sufficient quantity of compliant animals for export assembled by then”.

A complication arose due to a difficulty with cattle not being administered a wormer at their farm of origin prior to their scheduled transport, which would have ensured that the required withdrawal period would have been fulfilled prior to slaughter in Algeria.

That this didn’t happen, in what would have been the vessel’s second recent sailing to North Africa, has led to the Sarah M’s sitting empty and moored in the Estuary in the interim.

Eight days ago, Department of Agriculture officials met with “the exporter and his associates…at which time the processes and protocols necessary to enable the export (to) proceed were agreed”.

A Department spokesperson stated: “The exporter reverted on Monday morning (last) indicating that the export would not proceed on this coming Friday (May 15) as it was not possible for him to have sufficient quantity of compliant animals for export assembled by then.”

The EIBF statement read: “The impasse came to a head during the week when the shipping company facing birthing charges of tens of thousands of euro per day made the decision to ship the cattle out of France rather than Ireland. The loss of this contract to ship 13,000 finished bulls and steers from Ireland to Algeria would have been a damaging blow to competition for finished cattle in Ireland.”

EIBF Chair Eamon Corley said that bull beef “has the potential to be the most profitable of all beef enterprises because of the superior conversion rates of bulls versus other animals. In recent years, many farmers have been forced to castrate bulls due to lack of markets and also excessive factory penalties for overage and overweight bulls.”

Mr Corley thanked Agriculture Minister Michael Creed and Department officials and the efforts of “all farm organisations” in creating “a workable accommodation to facilitate the shipment”.

According to EIBF: “Payment terms for this next shipment have also being sorted out with the shipper and farmers are guaranteed bank transfers of monies after cattle cross the scales in New Ross Mart. Being able to plan ahead and feed bulls to their potential without the need to check weights and age on a weekly basis would be a big plus for beef finishers. Farmers now need to pull together and support this shipment and make sure enough cattle are supplied to fill it.”

IFA President Tim Cullinan said it “would have been a spectacular own goal if this ship had not left Ireland with cattle”.

He continued: “It’s disappointing that we had these issues, but I welcome the fact they have now been resolved. Live exports provide vital competition to the factories in Ireland and it is crucial they remain a top priority.”

“It’s also important the farmers are paid on the day for the cattle they deliver,” he said. “We understand that commitments have been given in this regard, but farmers need to be clear what the precise arrangements are.”

Farmers feeling ‘scapegoated’ by the Government