Diary From A Social Distance: Sunday, May 17

The final daily blog by Deputy Editor Dermot Keyes from his #stayathome office, which he began filing on Monday, March 23 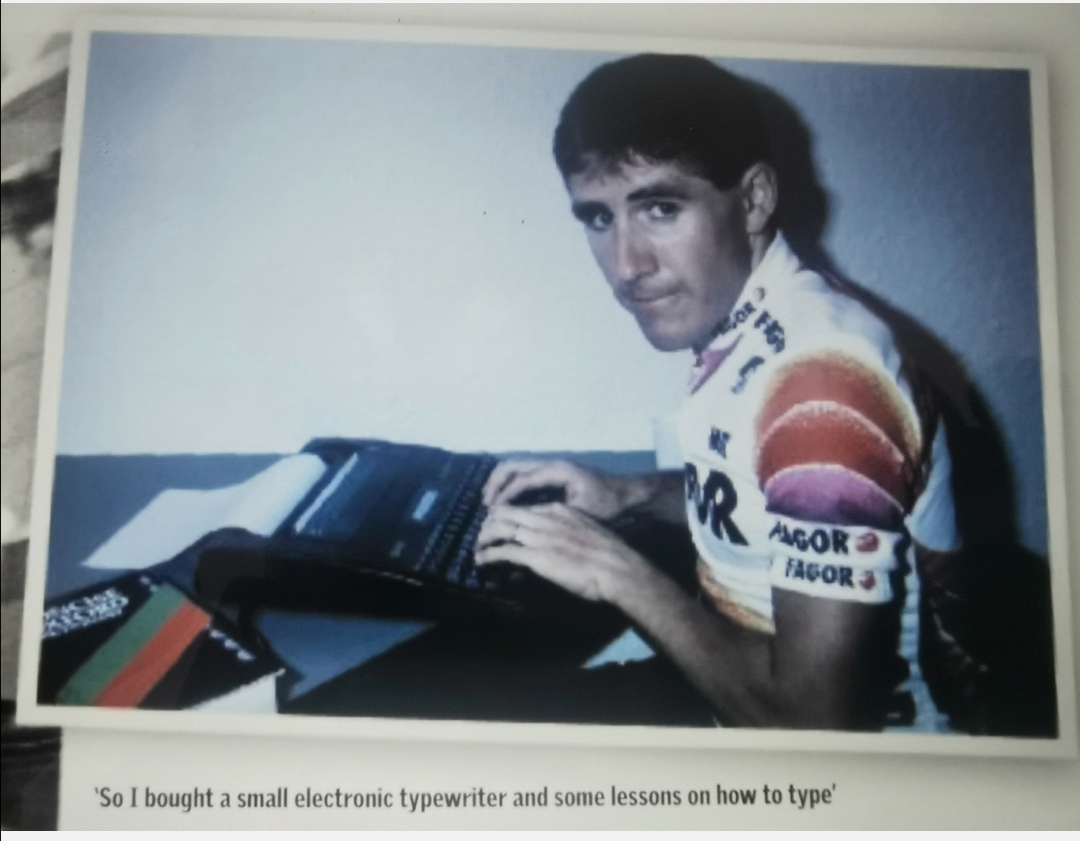 Paul Kimmage, pictured in those double jobbing days before fully embracing the life of a journalist.

Sunday, May 17, 8:56am: The traditional day of rest has come around again. I’ve managed six and a half hours’ sleep but don’t spring out of bed automatically. I know Paul Kimmage has a big piece in today’s Sunday Independent, marking the 30th anniversary of his book, ‘A Rough Ride’ which I turn to immediately once I turn on my iPad. It does not disappoint. Kimmage rarely disappoints, even when making a point I’m not necessarily in league with. The writing is so enjoyable, there’s never a wasted word and of late, perhaps indicative of the times we live in, Kimmage is a touch more introspective than he generally is.

He quotes an Irish Times excerpt about his book which has dated as badly as any of the many defences subsequently made about the ultimately disgraced Lance Armstrong. “(Kimmage’s) awful admission of the needle of a syringe being slipped under the skin of the shoulder and amphetamines being injected into his system to charge him has led to some sponsors already withdrawing support and others are very seriously considering continued involvement. Parents of youngsters in the sport must also be very worried. Kimmage inferred on television that ‘they were all it’. He did not make it clear that his compatriots are included in this sweeping statement but he did not say that they are not either…It is a sad tale of his disillusionment and his inability to cope with his failure to make it on the professional scene after a good career as an amateur.” The volleys of criticism left Kimmage “so fucking angry. And it changed me.” How could it not change him?

He writes of the disastrous 1998 Tour de France (which wheeled through Waterford) in which a team official was stopped at the French/Belgian border “with a trunk full of growth hormone, cortisone, testosterone and EPO.” The Festina affair ought to have led to an ethical rebalancing within the sport. If only. “Then Lance sprung his magic and the shit-show resumed. Actually it got worse.” He rattles off 18 different cyclists, including Ivan Basso and Alberto Contador along with Team Sky and readily admits that the degradation of his sport had worn him down.

Kimmage finishes the piece by recalling a dream in which he was “drowning in this huge, stinking cesspit and who showed up? One of my old buddies who hated me. I looked at (Stephen) Roche and told him to get stuffed but he was reaching down, offering his hand, trying to pull me out.”

He writes: “I sent (Roche) a text a while later. ‘I had a dream about you recently – I gave you a hug.’ He sent a reply: ‘Let’s try to meet for a coffee’. We’re trying.” I’ll read this piece more than once. I just know it.

9:14am: I switch over to The Sunday Times where Brenda Power is on the money when she writes: “For all of our politicians’ posturing about the importance of free speech, they continue to support the world’s most draconian defamation regime here, where hurt feelings are compensated for more generously than lost limbs. Yet somehow social media platforms, some of which have headquarters in Ireland, escape any repercussions for hosting such vile content. But if Instagram, Twitter and Facebook suddenly found themselves treated like publishers – which is what they are, not billboards – you’d be amazed how quickly they’d develop algorithms to nip racist, sexist and threatening content in the bud.” Amen to that, Brenda.

10:30am: I post a piece about dairy farmer unrest on our website. Suppliers and Glanbia offering a difference of opinion on the milk price has been one of the more regular agricultural stories that I’ve reported on over the past 10 or more years. The peace between both has been rarely anything other than uneasy and there’s nothing to suggest that the nature of this relationship will fundamentally alter itself any time soon. 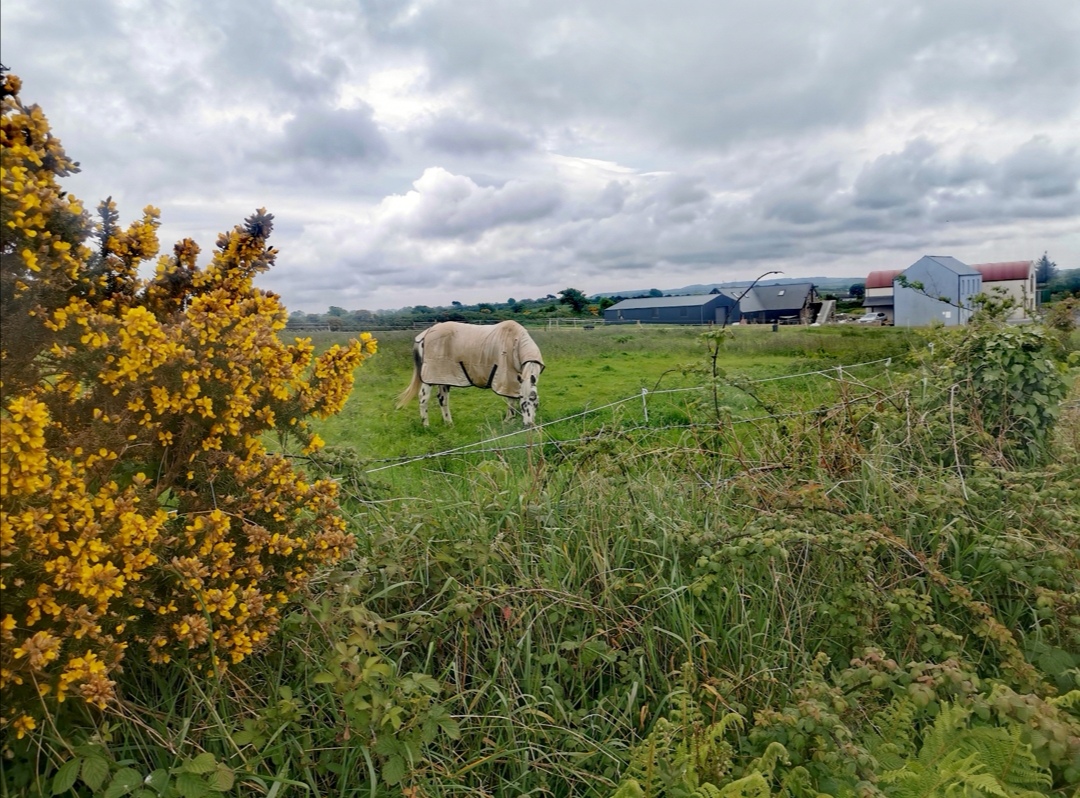 One of the two horses I spotted grazing while on my morning walk with the dogs.

10:41am-11:38am: It’s one of the greyer mornings of late while I take Buddy and Zippy on their, by now, customary five-kilometre walk out of the suburbs, into the country and ultimately back into the suburbs. A couple of horses are grazing in a paddock I’d not previously noticed any sizeable animal life in while some freshly tipped rubbish has also made an unwelcome appearance, including vegetable peels, an empty tea bag box and a cardboard beer bottle holder. The return of ‘civilisation’ is already leaving its mark, sadly. I’ve spotted a few discarded coffee cups on the Williamstown Road over the past few days as well. I really hadn’t missed them. 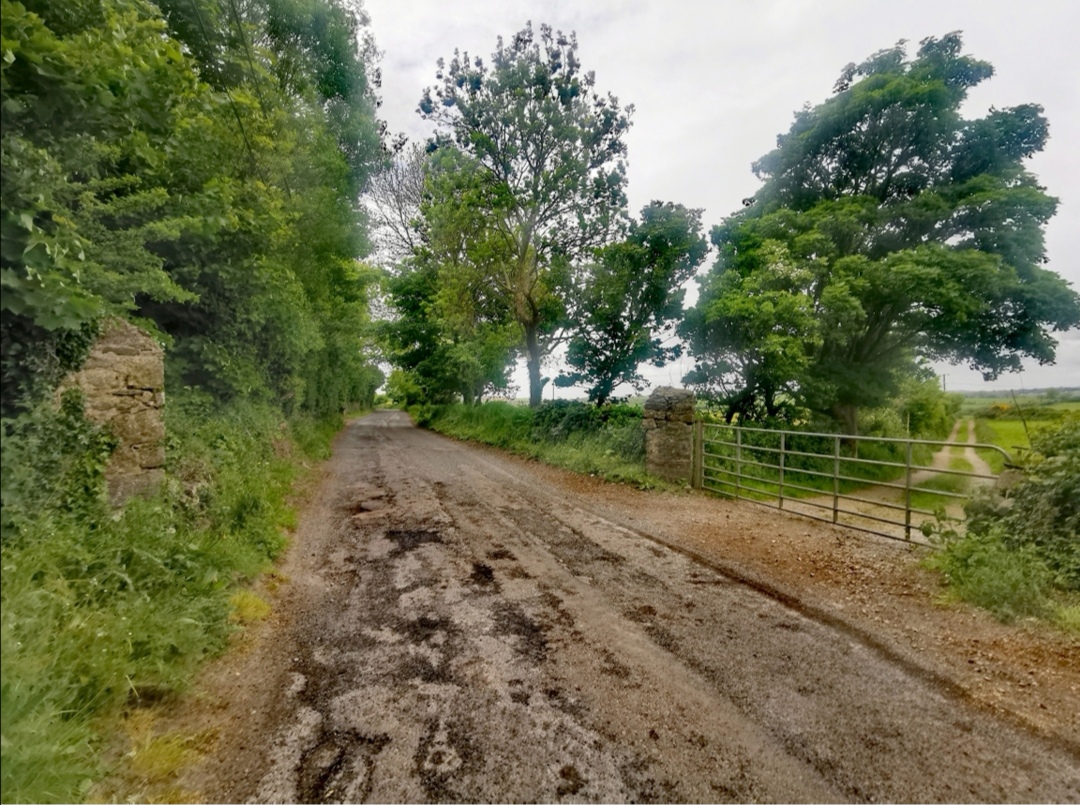 This was once a road less taken. I’m happy to say this is no longer the case.

11:52am-2:17pm: I assemble and post yesterday’s diary entry, in addition to posting an update on the Sarah M livestock ship, which is now expected to sail from Belview to Algeria before the end of the week with bulls and bullocks. Most of those who offer comment on the story make their unhappiness over live exports of this kind known, with their sympathy for the animals made plainly manifest. I can’t help thinking that a story like this is one where the perspectives of many urban and rural dwellers would differ significantly, even if not necessarily universally.

The sale of livestock was once a thriving element of commercial life on the Hill of Ballybricken. Things have changed somewhat in the interim of course and we’re not as reliant on farmed meat as previous generations were. The beef trade is not going away any time soon and if you enjoy a burger while recoiling at the thought of livestock being slaughtered here, Algeria or anywhere else for that matter, you’re unlikely to make that admission on social media now, are you?  I readily accept the sincerity of those appalled by the prospect of a ship load of live cattle sailing to North Africa as much as I do the rank hypocrisy displayed by the innumerable masses on Facebook and Twitter on a daily basis. 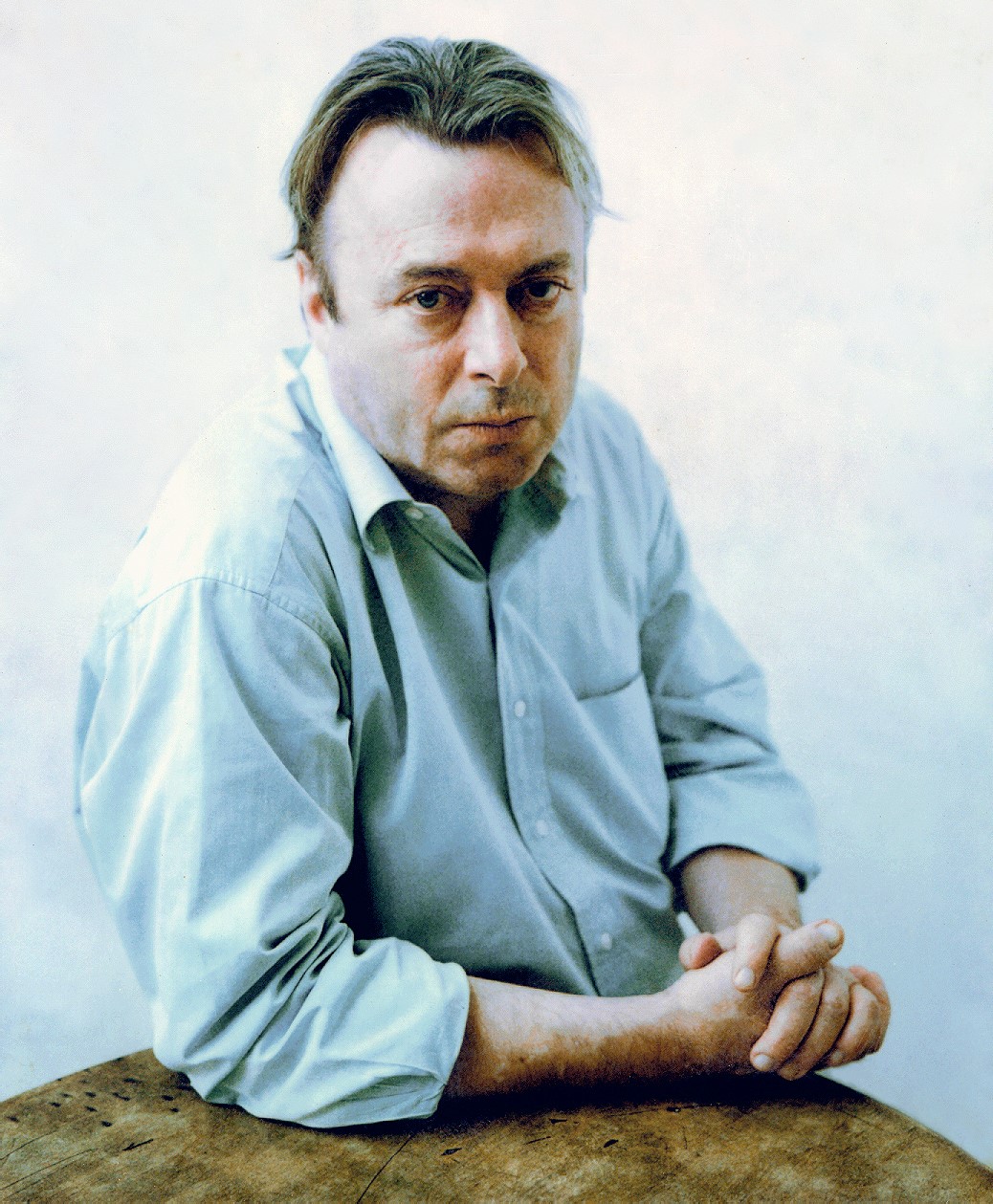 Sunday afternoon/early evening: I remain internet-free for a few welcome hours, dabbling in some gardening while listening to a few chapters from two books: ‘Born to Run’ by Bruce Springsteen and ‘Thomas Paine’s Rights of Man’ by Christopher Hitchens. Both are stunningly composed. Long live The Boss. ‘Hitch’ is sadly missed in an era where the ‘Common Sense’ both he and Paine extolled would be all the richer for their contemporary application.

10:21pm: I pretty sure I heard Rescue 117 a few minutes ago. Hearing the Search And Rescue Helicopter out after night is rarely, if ever, a good sign. 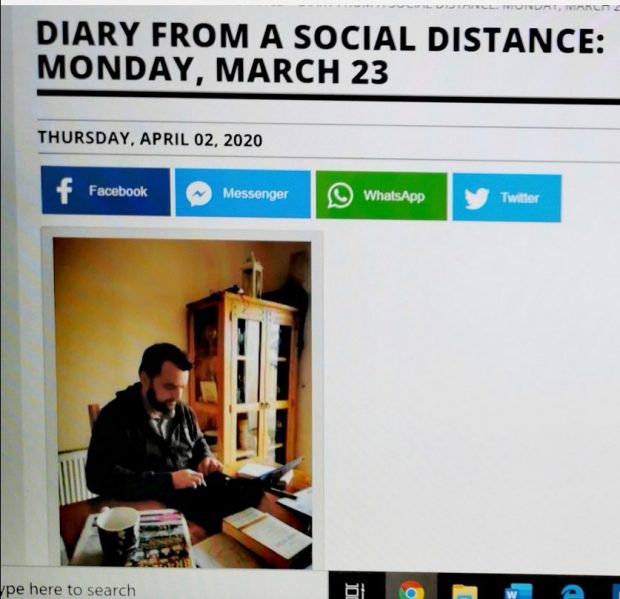 A screen grab of my inaugural diary entry, all of eight weeks ago.

11:04pm-11:47pm: I opt against an anti-social run and join herself and the two hounds for our final excursion of the day. Once again, the roads are very quiet, dogs barking several miles away can be heard and myself and herself chat about our dogs, work, our dogs some more and a few other things that are no-one’s business only ours.

Since March 23, I’ve maintained this diary and its scope deepened as the days and weeks wore on. I didn’t anticipate compiling a 56-day record of this out of the ordinary window in history but here I am and I’m glad I was asked to do so. I’ll keep taking notes every day and publish a piece every Tuesday for as long as some level of emergency remains in place. I’ll have plenty of other stories to write and interviews to conduct.

When we return home, I thumb through ‘The Daily Stoic’ to seek out my May 17 message. Epictetus declares: “Show me someone sick and happy, in danger and happy, dying and happy, disgraced and happy. Show me! By God, how much I’d like to see a Stoic. But since you can’t show me someone that perfectly formed, at least show me someone forming themselves so, inclined in this way…Show me!”

Since the public emergency was declared, there have been 24,112 cases of the coronavirus recorded in the Republic of Ireland and 1,543 deaths. In Northern Ireland, there have been a total of 4,357 cases and 476 deaths. According to the Johns Hopkins University figures referenced by the BBC at 6:46pm this evening, there have been 4,650,365 confirmed Covid-19 cases worldwide and 313,251 deaths. The crisis was never the focus of this particular diary but I’d like to think I’ve never lost sight of what led to its creation in the first place. And that feels as appropriate a sentiment that I can share as I partly close this gate behind me. I’ll touch base again soon. In the meantime, keep washing those hands and keep staying safe. And remember: being kind must start within.

Sunday, 11:48pm: Dymphna Nugent writes on our website: “A search and rescue operation is currently underway off the coast of the Guillamene in Tramore, following reports of a missing male. The Gardaí, Rescue 117 and the Ambulance Service have all responded to the call-out this evening, which is currently underway. More information to follow.” I head for bed with an unavoidably glum feeling.

Dermot will maintain this blog on a weekly basis, both here and in print as the public health restrictions continue to ease. Thanks for all the kind comments since March 23!