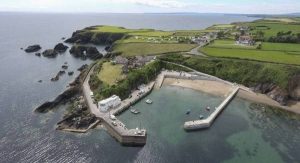 Boatstrand Pier has received €150,000 in funding from the Department of Agriculture & the Marine. Photo: Irish Examiner

Four harbour projects in Waterford are to benefit from €435,000 in funding as part of a nationwide package totalling €3.1 million which will permit the overall repair of 58 harbours and slipways owned by local authorities.

Both Tramore’s North Pier and Helvick Pier have received €150,000 each, with Boatstrand Pier and Youghal Bridge/Tinnock Pier receiving €120,000 and €15,000 respectively.

With central government co-funding 75% of these projects, Waterford City & County Council will provide the balance of the invested monies.

The works in Tramore will permit the remediation of the seaward side of the southern pier wall, the casting a new reinforced concrete (RC) wall to the exposed face, along with foundation and scour protection involving RC concrete works.

A concrete slab is to be built on the shorter pier wall at Helvick, with repairs to the pier wall and required grouting to be conducted “as necessary”.

The final phase of strengthening works to the main east pier at Boatstrand will now go ahead, while works on the facing of the outer length of the main pier’s south east face will also be completed.

Meanwhile, the funding for Youghal Bridge/Tinnock Pier will permit the replacement of the ladder at the pier.

“The continuation of the Fishery Harbour and Coastal Infrastructure Development Fund Programme is critical in helping Local Authorities like Waterford to repair and develop fishery and aquaculture linked marine infrastructures under their ownership,” said Senator John Cummins (FG).

“I am particularly conscious of how badly hit the fishery sector has been with Covid-19 and the looming threat that Brexit poses for the industry”.

According to Agriculture & Marine Minister Michael Creed: “This enlarged scheme will provide a much-needed economic boost to these communities, given the impact the Covid-19 pandemic has had on rural areas. The diverse range of projects…will not only create local construction employment over the lifetime of the projects, but equally will further enhance the amenities provided to the wider Marine community in these coastal areas.”