“HOW you doin’, Grandad… are you still in the cocoon? What you doin’ for your birthday?” A WhatsApp message from my 12-year-old granddaughter starts my day. “You know well, Anna, but it’s going to be perfect this time.” And when I talk to her later in the day, the sigh is clearly audible all the way from her hacienda home at the edge of the Panamanian cloud forest. “Not again, Grandad, last year, you forgot to put in the baking soda!”

‘I wanted to put my failures behind me once and for all. No more the hard crust and undercooked interior, an end to the shriveled biscuit that had failed to rise more than an inch but useful perhaps to nail on to a leaking shoe.’

And so the saga continues. I’m one of the multitude that between us bought 680,000 bags of flour in one week when all this began. And so, two bags of white and two bags of ‘brown’ – my version of panic hoarding. Only when I was putting it away in the cupboard did I fully read the labels – ‘plain’ and ‘wheatmeal’. So much for my simple understanding of ‘white’ and ‘brown’. Being told I had a little more time this year, I googled ‘flour’ and discovered that there were at least 10 different kinds. Here deep in the cocoon was my Eureka moment – I had used the wrong flour and… that’s why my soda bread never turned out anything like the textured delight of that cozy West Cork B+B that drew people to its “remoteness and sense of reflective isolation”.Oh! that bread! A fellow guest, from America, quoted Julia Child, “How can a nation be called great if its bread tastes like Kleenex!” I replied with a line from Cervantes, “All sorrows are less with bread.”

So, I added one more project to my growing list – learn about flour and bake the perfect soda bread. The proliferation of flour labels was daunting – cream, self-raising, strong, wholemeal, wholewheat, wheatmeal, I learned there were two kinds of wheat, hard and soft, the latter was more natural in damper Ireland. Hard wheat was higher in protein and gluten; our shop-bought flour was a blend. And so where was I to go with this new knowledge? I wanted to put my failures behind me once and for all. No more the hard crust and undercooked interior, an end to the shriveled biscuit that had failed to rise more than an inch but useful perhaps to nail on to a leaking shoe. I consulted Bord Bia, the Allens and others. It was 50/50 between ‘plain’ and ‘strong,’ so I decided to call a friend – last throw of the dice. I eventually opted for ‘wheatmeal’ and ‘plain’ – two portions of the brown and one of white.

Then there was the soda to be sorted. What a revelation to discover that it was the indigenous people of North America that first used a form of baking soda – the potash from burned wood – and that its use came to Ireland during the famine years and that was the beginning of Irish Soda Bread. 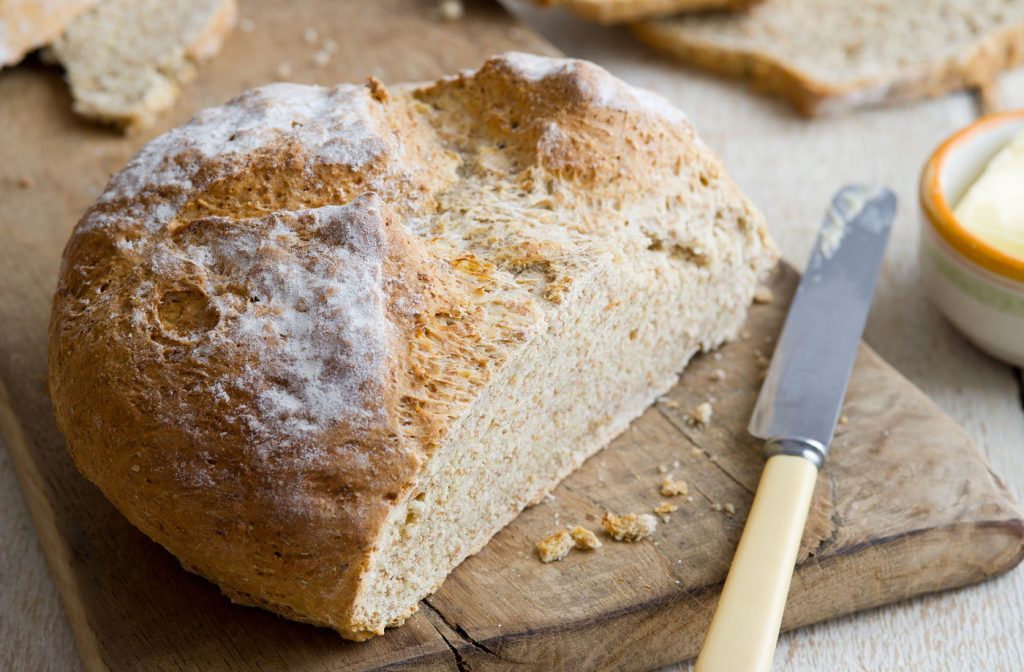 And so to the intricacies of baking soda… and that’s a whole other adventure for another day, as is the story of the local mills that made the flour, including two near Jack Meade’s, on the Cheekpoint road, one of them, a tidal mill across from Little Island, a rare Irish example. I imagine these mills to have been great gathering places, an earlier social medium. Now when I put all the ingredients together – 300 grams of wheatmeal, 150 grams of plain, 1 teaspoon of baking soda, a good half-teaspoon of salt, and buttermilk added slowly, and baked medium high, I think of social interaction – its absence.

And, I also think of Edward Fitzgerald on Little Island less than a mile from the tidal mill who gave us those atmospheric lines in his translation of the Rubaiyat…

Here with a loaf of bread beneath the bough

A flask of wine, a book of verse, and Thou

Beside me singing in the Wilderness…

And so, Anna, and Sophie, and Jack, when you are asked in years to come “what do you remember from the time of Covid?” you might reply… “my grandad, he finally got it right – he made the best-ever Irish soda bread.”