CHILDREN across Waterford were due to be making their First Holy Communion over the last two weeks, and some in the weeks ahead. Unfortunately, the restrictions on large public gatherings has meant that these special days have had to be postponed until a later stage.

This decision caused disappointment for children and families, who were so eager and excited to celebrate the day. Many households decided to do something a little special for the day, and so there were cakes, garden tea parties, balloons, the dress (where available), and children still felt special and grown-up celebrating what would have been their First Holy Communion.

Erica Cowman, from Mr. Purcell’s class in Glór na Mara NS, went to the ‘Hope’ tree in Fenor. Her Mum, Vicki, said, “Hope is all we really have because of the times that we are in.” 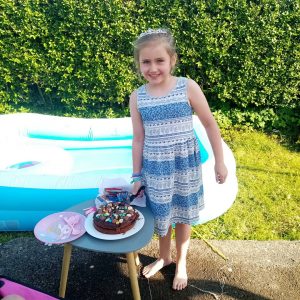 Across the bridge in Ferrybank, Annika Hannigan from Ms. Millea’s class in St Colmcille’s NS celebrated with pink and white decorations, cakes, sweets and her beautiful communion dress.

Aaliyah O’Keeffe had a lovely day at home with her Mum Emma, her Dad Wayne, and her brothers in Tramore, where they had a party to celebrate.

Elliemay Mardon wanted her makeup done as a little treat to mark the day, and she felt really grown-up waiting for her communion day to come.

Willow Nugent’s dress is still sitting safely in the shop waiting for her communion day, which should have been May 9, so she wore her Mum’s communion dress (27 years later!) which had been carefully kept for such a day.

This year has been a year of extraordinary upheaval for children, with some not getting the opportunity to say goodbye to their primary school friends in 6th class, and other children not having the routine which they oftentimes rely on. Marking the day in this way allowed children to still enjoy what would ordinarily have been a special day with friends and family.

Videocalls to grandparents and family brought everybody together, and some of the children rounded off the day with a phonecall to their friends. It definitely was a day to remember, and a preparation for when the First Holy Communion is made at a safe time in the future.

If your child celebrated the day in a special way, or did something nice with family, drop an email to [email protected]