Update on the cath labs situation at UHW 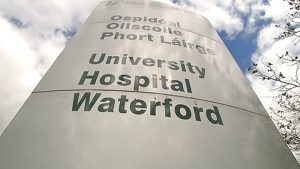 NEWLY elected Senator, John Cummins has passed on an update into the situation involving the cath labs at University Hospital Waterford. At present, our single lab has been closed since February for upgrading works and the proposed 2nd lab is still very early on in the process, with tenders for construction still pending.

Senator Cummins received correspondence from Minister for Health Simon Harris’s office on Tuesday (May 19) which provided status updates on the cath labs.

“The Estates Unit in the Health Service Executive has been tasked with the delivery of additional capacity (infrastructure and equipment) nationwide in the effort to contain and prevent the spread of COVID-19. This has resulted in delays to works and schedules. However as outlined previously funding has been allocated in the Capital Plan for the provision of a 2nd Cath Lab at University Hospital Waterford. Planning Permission is in place for this project and applications for fire and disability certification are currently in progress. Preparation of contract documentation has commenced; contractor selection is underway and it is anticipated the project will go to tender before late July”.

“This is hugely welcome news, and is something that I have been pursuing strongly since my election to Seanad Eireann,” Senator Cummin said. “I have raised it at every available opportunity with Minister Harris and the Taoiseach and while I acknowledge the works the Estates Office in the HSE have been doing around Covid-19, now is the time to recommence work on critical non-covid capital projects like the 2nd Cath Lab at UHW. I am reassured from the response I’ve received that work is well underway in relation to the preparation of contract documentation and contractor selection with a view to the tender issuing before late July”.

With regard to the cath lab currently being upgraded, the Dept of Health said:

“Building works have already been completed in respect of the refurbishment of the existing Cath Lab at University Hospital Waterford, they are awaiting the installation and commissioning of equipment as part of the Equipment Replacement Programme. It is expected the equipment supplier will be on site in mid-June to complete these works and estimated the equipment will be commissioned by late July”.

“I understand there may be some issues with the delivery of parts associated with the Cath Lab due to supply chain issues associated with Covid-19; however I am still hopeful that the timeline for the installation and commissioning of the Cath Lab equipment can be expedited,” Senator Cummins said. “Once complete and operations are transferred back to UHW from UPMC, we will have two state of the art Cath lab facilities in Waterford – one at UHW and the other at UPMC. It is my belief that a service level agreement should be reached between the HSE and UPMC in relation to the provision of diagnostics for Cardiac patients across the South East that will more than match what was being provided by the mobile lab at UHW which only operated 3 days a week. It is my view this would fill the gap while the 2nd permanent lab is being constructed at UHW”.

The Waterford News & Star visited the cath lab at UPMC Whitfield this week as well as catching up on the immensely positive relationship that has developed between UHW and UPMC, which has been expedited by the Covid-19 emergency and could well be one of the most significant stories of the last few years. The full story can be read in next week’s edition and online, and it will be worth waiting for.