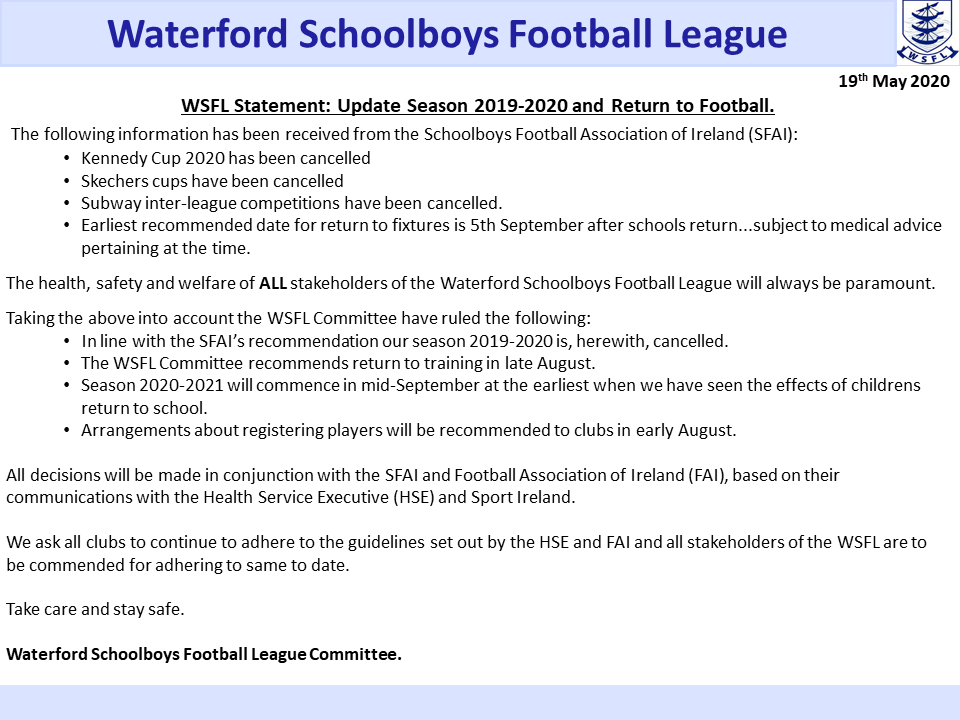 As expected, the Waterford Schoolboy Football League confirmed last evening (Tuesday) that the committee have cancelled the 2019/20 season amid the Covid-19 Pandemic on the back of the SFAI decision to do likewise on Monday.
After the SFAI Executive met in a special zoom meeting on Saturday last where they called a halt to all National competitions including the Skechers Cup and the Kennedy Cup, the WSFL have come to the decision that they will not be in a position to finish the current season.
Although the decision of the league will come a devastating blow to the players, management and clubs, it’s not a surprising move considering the fact that the DDSL, NDSL and the Cork Schoolboy League reached the same conclusion shortly after the SFAI statement.
With the league already losing out on ten weeks of action due to bad weather, it wasn’t practical for them to finish the season prior to October 11 and after they outlined to this newspaper that they weren’t going to return until the schools returned, it was inevitable that this season wouldn’t be completed.

“HEALTH AND SAFETY PARAMOUNT”
In a statement issued to all clubs and this newspaper, the WSFL committee said “The health, safety and welfare of all stakeholders of the Waterford Schoolboys Football League will always be paramount and that the committee had ruled that they would be following the SFAI recommendation to cancel the season.“
The committee also outlined that they recommend to all clubs to return to training in late August with the 2020/21 season to commence in mid-September at the earliest. “The season will commence in mid-September when we have seen the effects of the children’s return to school. Arrangements about the registering of players will be recommended to clubs in early August”.
The statement concluded, “All decisions will be made in conjunction with SFAI and Football Association of Ireland (FAI), based on their communications with the Health Service Executive (HSE) and Sport Ireland. We ask all clubs to continue to adhere to the guidelines set out by the HSE and FAI and all stakeholders of the WSFL are be commended for adhering to same to date.”
The Waterford News & Star would like to put on record their appreciation to the Waterford Schoolboy League chairman Davy Cullen and Secretary Pat Kelly for their help, support, and co-operation to our Schoolboy soccer coverage throughout the season. We wish the league the very best for the future and look forward to our continued association with the league when soccer returns whenever that may be.