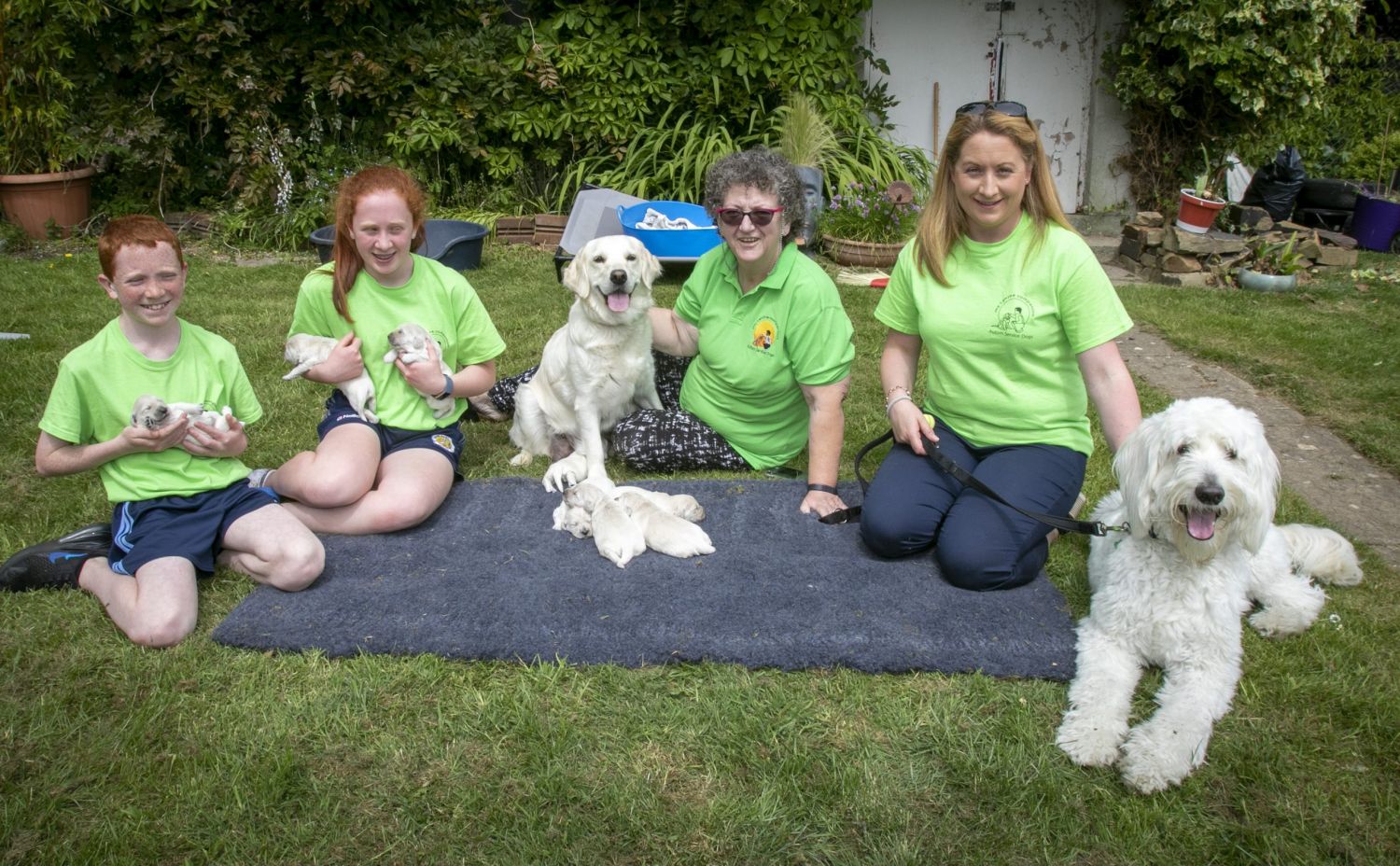 Daniel Ryan, Aoife Ryan, Aine O’Brien-Farrell and Sinead Ryan, with Eric and Jennie and her litter of eight pups who will become service dogs for the My Canine Companion Charity. Photo: Joe Evans.

Not all heroes wear capes is a tagline that we’ve all heard plenty of times during these last few weeks. It’s completely true of course and we all owe a huge amount to all these heroes.
I met some of these heroes this week on the Dunmore Road when I visited the house of Áine O’Brien-Farrell. Áine is the Waterford contact for the charity My Canine Companion whose main purpose is to provide highly trained and skilled dogs to people with disabilities, particularly autism.
Áine has been breeding dogs for many years and two years ago she became involved with My Canine Companion. Not long after that she received a six week old Golden Retriever pup called Jeannie. From that day on Jeannie became an integral part of Áine’s family with the aim always being to breed off Jeannie for the charity, who is always in need of new service dogs to cater for their long list of worthy families who would benefit so much from a service dog. 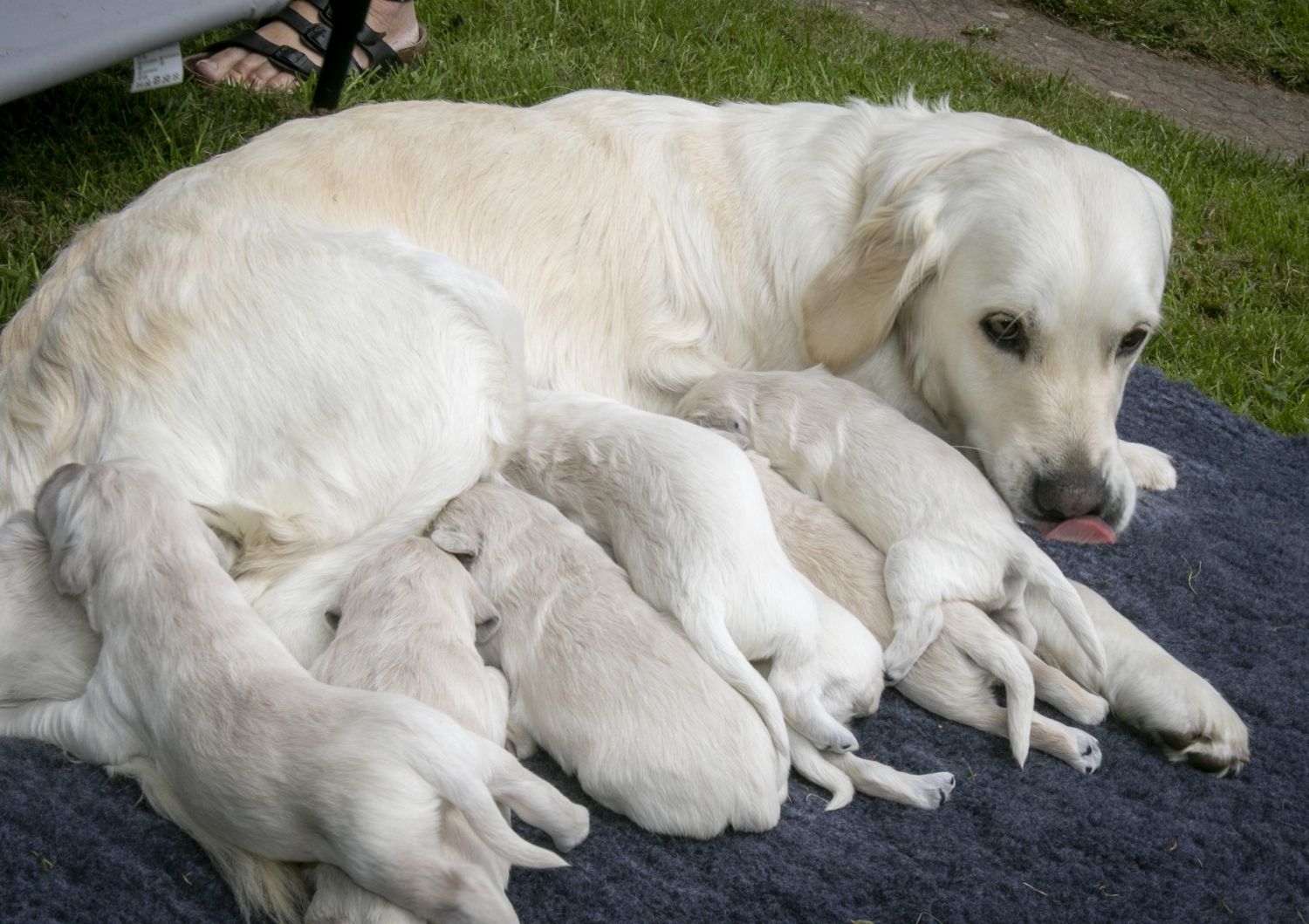 EIGHT BEAUTIFUL PUPS
After her nine week pregnancy, on May 11, Jeannie gave birth to eight beautiful Golden Doodle pups. “The scan said she was pregnant with seven pups so when the seventh one came out I went off to make a cup of coffee,” says Áine. “When I came back, there was an eighth, which was a lovely surprise.” These pups, the P litter as they are known (four dogs and four bitches) are the first My Canine Companion pups born in Waterford.
How have they been since they arrived? “Well I was up all the night before last with them but I was only up four times last night, so hopefully we’re getting there,” says Áine, who is an unpaid volunteer for the charity. She also has a help from her two sons, one of whom lives in England but keeps an eye on the pups and mum Jeannie by a webcam set up in their room. “I got a text from my son in England last night at 11.30pm to ask me where’s Jeannie? Sure enough when I went down and checked she was after climbing out of where they are. That’s technology for you.”
Jeannie and Áine are not only heroes for My Canine Companion but they are also diehard Munster fans and never miss a match in Thomond Park. Jeannie even has her own Munster jacket and is known by the whole Munster squad. 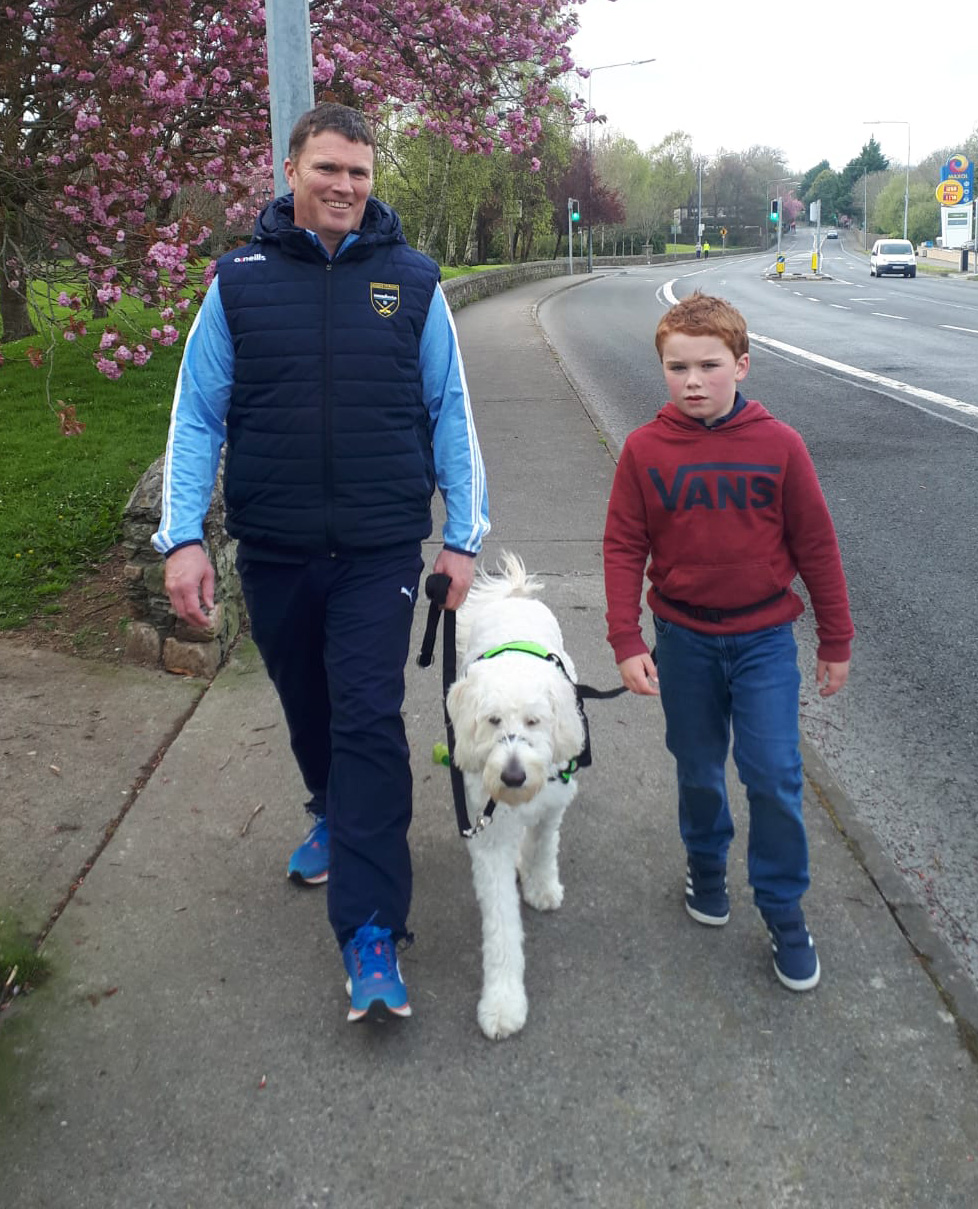 David and Ciarán Ryan out for a walk with Eric their My Canine Companion dog.

‘BRINGING FAMILIES TOGETHER’
The Ryan family from the Dunmore Road know first-hand how important this charity and service is. Ciarán Ryan received his My Canine Companion, Eric, in August 2018 and in September of 2019 he became a fully fledged and qualified service dog. The difference he has made to the life of the Ryan family is huge as mum Sinead explains. “Eric has been amazing for our family. The charity’s motto is ‘bringing families together,’ and that couldn’t be more true. Before Eric joined our family we could never all leave the house together as a family unit but now we can. Ciarán has no sense of danger but since he has been anchored to Eric it’s been amazing the difference. We can now all go out together and even to events. These dogs are amazing and now thanks to Jeannie and Áine there will be eight more families who will benefit.” 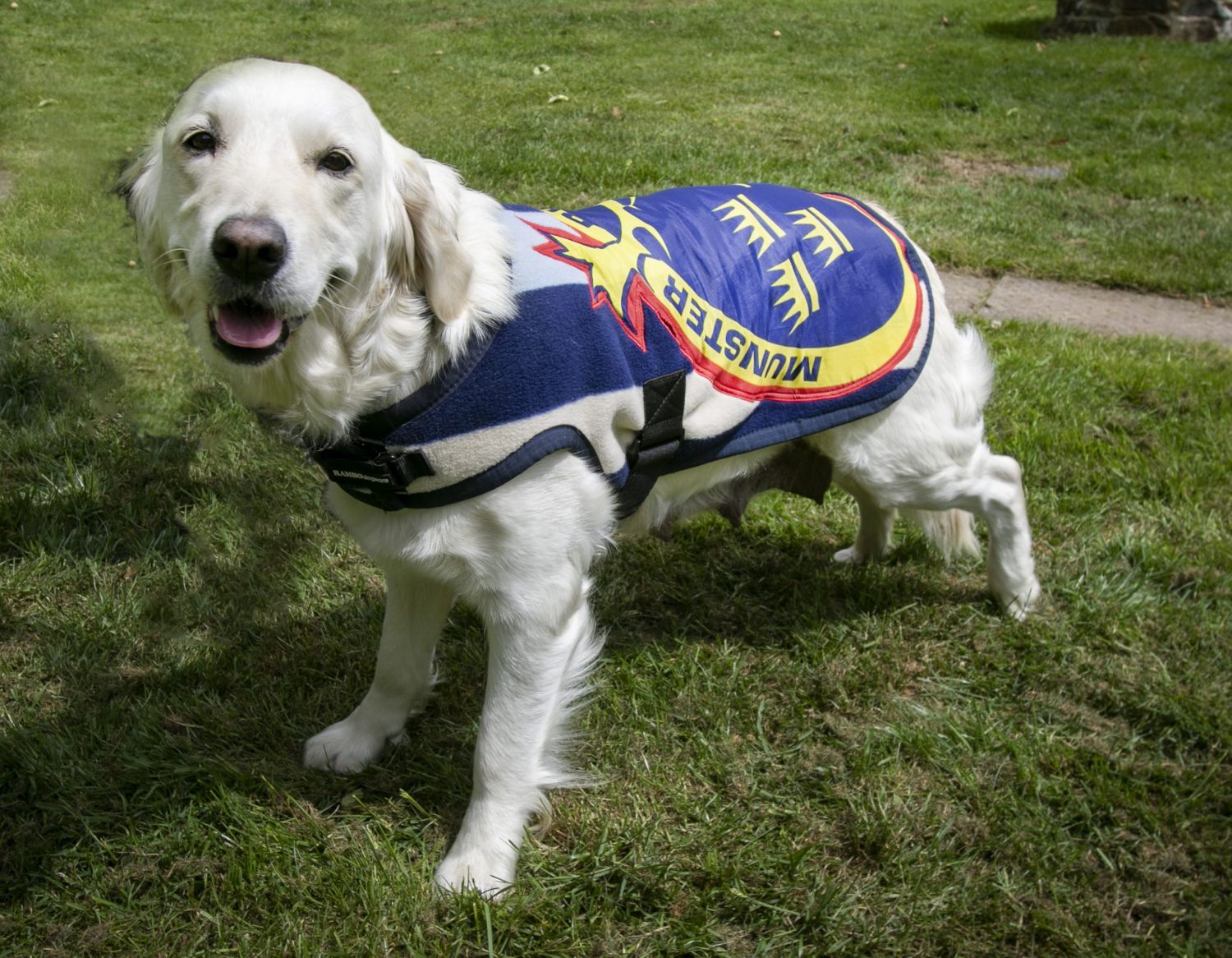 Jennie can’t wait to get back to the Munster Rugby matches. 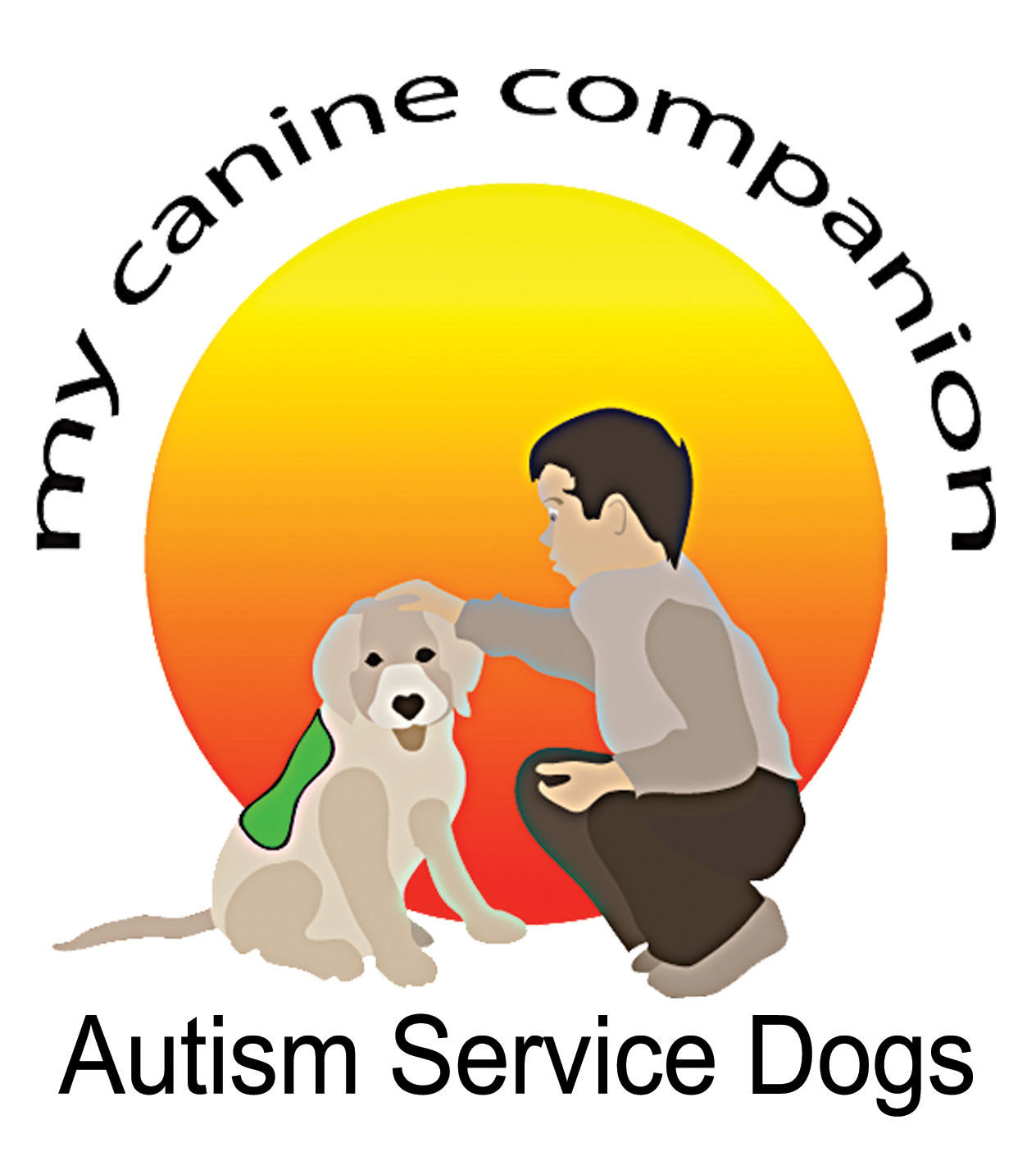 DIFFICULT TIMES
Of course such charities are not cheap to run. It costs about €10,000 to train each dog and like all charities, My Canine Companion, has been badly hit this year as their two main fundraisers for the year, the Green Tie Ball and Jog For A Dog were both set to be held in April but both had to be cancelled. These beautiful new pups can be sponsored by local businesses, especially any P businesses as these pups’ names will all start with the letter P. The charity are also hosting an online quiz on May 30 and all the details are on the My Canine Companion Facebook page. There is also a donate link on there if you’d like to make a donation or click on this link:

Remember, all heroes don’t wear capes and many have four legs and not two. 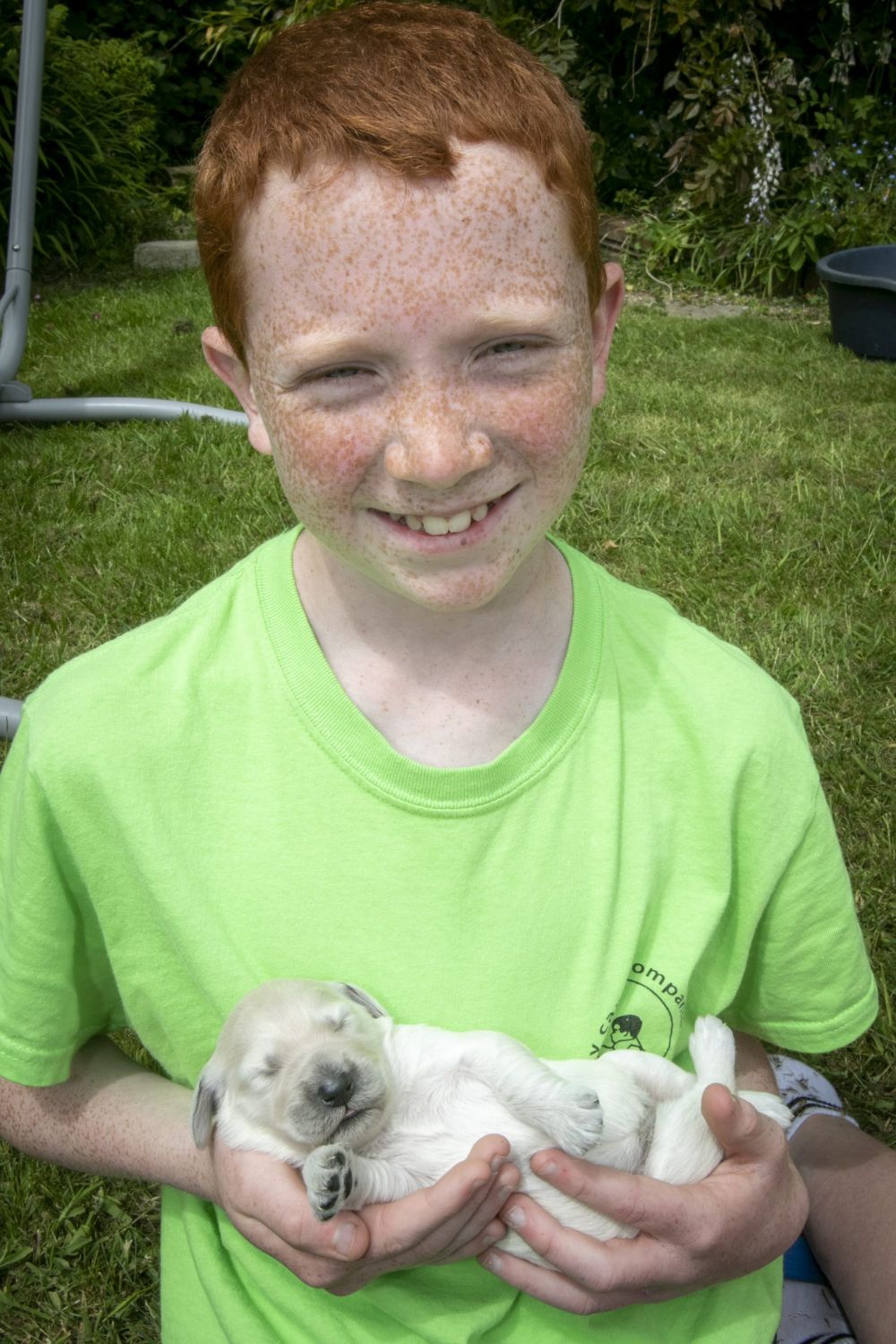 Daniel Ryan, with one of the eight pups. Photo: Joe Evans.