Obituary: Martin was a man of many memories

IT is with tremendous sadness that we record the death of Martin Skelton, late of Clarke Road, Cork Road, Waterford and formerly Pearse Park who died on March 3 after a prolonged battle with cancer.
Martin will be desperately missed by his loving wife Meadhbh, daughter Louise, sons Leonard and Darren; grandchildren Adam, Gavin, Shane, Olivia, Conor, Ellie, Grace and Ben; brothers and sisters; son and daughters in law and extended family and friends.
Martin was born on August 9, 1951 and raised in Pearse Park by his mother Kathleen and father Andy. He spoke fondly of the childhood that he shared with his siblings Thomas, Andy, Mary, Ann, John, Pat, Theresa, and Jim. An instantly recognisable red head, Martin – or ‘Skelly’ as he was known to many people, was an outgoing, friendly, kind-hearted man from the beginning.
Martin attended school in the Manor before starting work in Widgers Butchers. In 1967 he joined Waterford Crystal, where he would remain for the rest of his working life, until it sadly shut down in 2009. ‘The Glass’ was a huge part of his life, as it was for much of his family as well. He worked in a number of different departments, as his own “Apprentice Bowl” will testify to, but it was in the Distribution Centre where he worked for the longest period and made some life-long friends. The Glass Factory was everything to the people of Waterford in the 60s, 70s, 80s and 90s and Martin was an integral part of that story, whether it includes the famous social nights and dinner dances, the strike of 1990, which saw Martin marching the streets of Waterford with his children, or the sad decline of the company in the late 00s, which led to a bitter fight for worker’s pensions afterwards. They gave their life for Waterford Crystal and were sadly left with very little to show for it.
The measure of a man is the memories that he leaves behind and depending on who you speak to you’re more than likely going to get a different memory of ‘Skelly’. You might hear about his singing, which he did well and often. He loved karaoke, Singing Pubs and basically any opportunity to sing songs such as ‘Saved by the Bell’ by the Bee Gees, which would become his signature tune. Others will remember his time in the Singing Pubs or his stint with Eddie Coady and the Silent Mics. He also played darts, did a spot of football managing and cycled just about everywhere he went.
Martin was a Man Utd fan all his life and also attended just about every Waterford United game until – oddly enough, they moved out of Kilcohan Park and closer to his home on the Cork Road. A sporting fanatic, he was known to watch just about any of it on the telly.
To his family, the memories were more personal and precious. More than anything else, he loved the get-togethers with his nearest and dearest. In the 80s and 90s, there was rarely a week would go by without some kind of house party where the sounds of Jive Bunny, James Last or Gilbert O’Sullivan would be frequently heard. Martin was besotted with music, and this was an obsession that was gratefully received by his children. One of the most famous elements of the house parties was the infamous “Electric Brush” for which ‘Skelly’ was possibly the greatest player this country has ever seen. To those unfamiliar, the brush was merely a sweeping brush that would be clutched, much like an electric guitar and strummed, drunkenly, to the music of the Shadows. Being around those he loved was all he ever wanted. 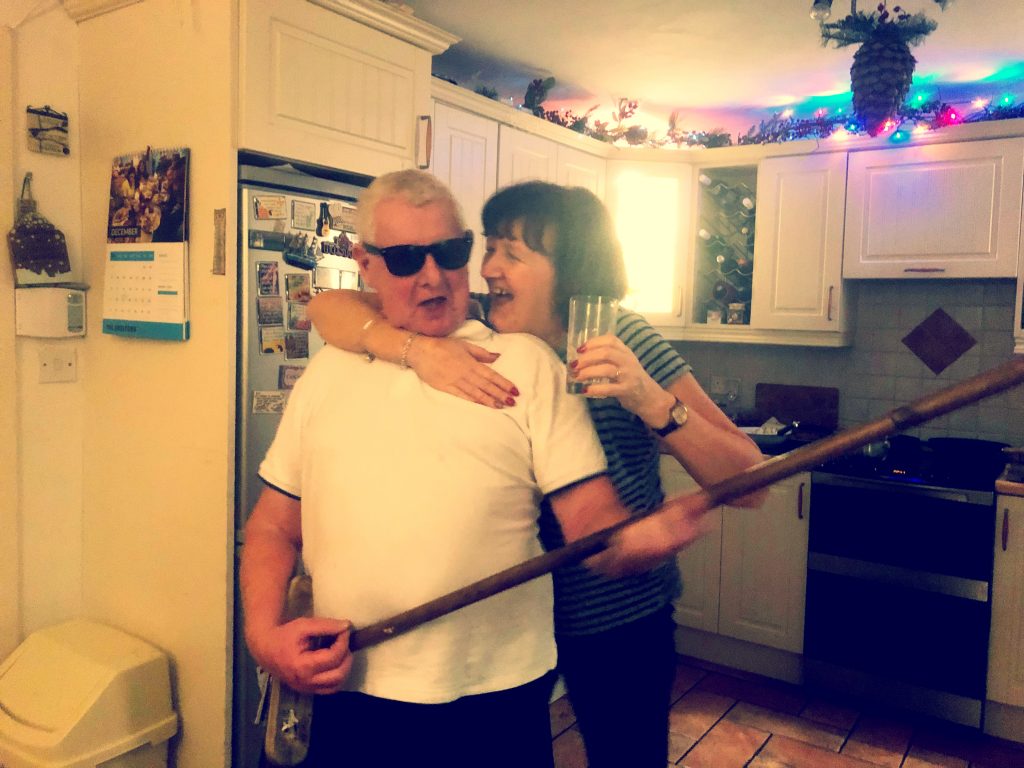 Martin’s life changed for the better when his grandchildren arrived. As good a father as he was, he was an amazing grandad and would bring them to the park with an endless patience for swings and slides that would keep them there for hours. He’d also bring them on his many trips to University Hospital Waterford or St. Patrick’s Hospital where he would visit all and sundry. He seemed to be immune to the effects of such places and his presence would also brighten up the patients and residents. His grandchildren will never forget him, in particular the Saturday lunches on the Cork Road where rain, hail or shine, there would be rashers, pudding, ham and rolls for all the kids. A dab hand in the kitchen, his “crispy poppies” will never be beaten, according to the grandkids.
Martin was diagnosed with prostate cancer in 2016 and he did everything he possibly could to beat the disease. He signed up for every trial available because he didn’t want to give up on life. He was up and down to Cork, for injections, tablets, chemotherapy, radiotherapy and just about everything that would keep him for as long as possible with his family. In August 2019, he took a turn for the worst and wasn’t expected to last much longer than a few weeks. However, he wasn’t going to miss Christmas with the family and was up and about and even helped to cook the dinner on Christmas Day.
Martin had so many favourite songs, from ‘The Living Years’ by Mike & The Mechanics, to ‘I Want to Know What Love Is’ by Foreigner. There are dozens of songs that will ensure that his memory lives on forever. However, there was always one song that held a special place in his heart – ‘I’ll Find My Way Home’ by Jon & Vangelis. He adored it and always said he wanted it played at his funeral. On Martin’s last night in this world, surrounded by his entire family in St. Vincent’s Dungarvan, unbelievably, “I’ll Find My Way Home” came on the radio. He passed away a few short hours later, in the hands of his beloved wife Meadhbh and his children, with his brothers and sisters right beside him.
Martin’s funeral mass took place in the Sacred Heart on Thursday, March 5, after which he was brought to his final resting place in St.. Mary’s Cemetery, Ballygunner. He will never be forgotten.