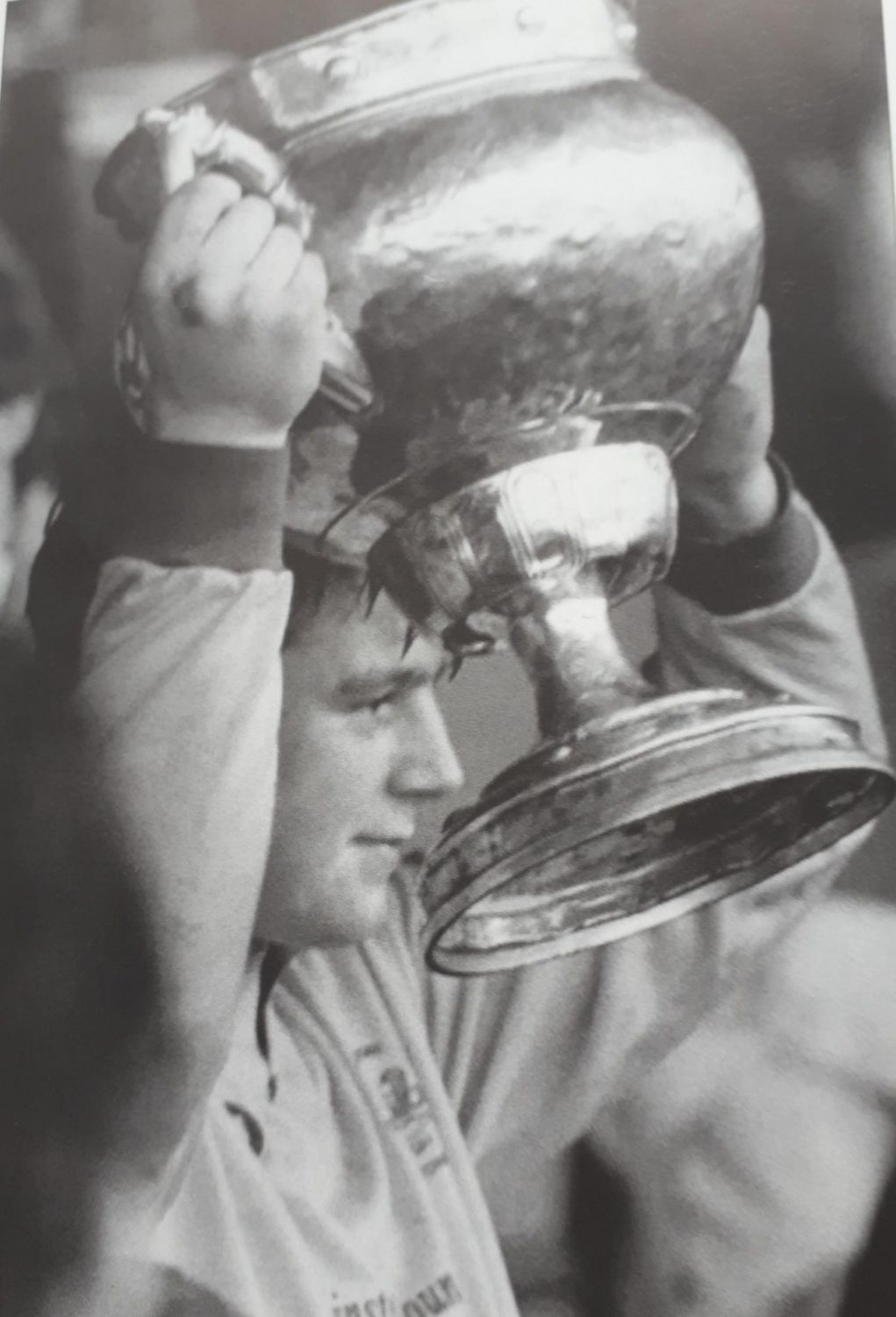 Paraic Fanning lifts the Fitzgibbon Cup as captain in 1992.

When you think about it, WIT’s record in the Fitzgibbon Cup is quite remarkable.
The college first played in the competition in 1988. Four years later they lifted the title and between then and 2014 they would go on to get their hands on the famous trophy on a further eight occasions. That’s some going, especially for what would be considered as a smaller college compared to the likes of UCD and UCD and others. So as we were looking back at those nine wins and picking our best 15 from those nine winning teams, we thought we’d get some Fitzgibbon Cup memories from some people who have played key roles in WIT’s Fitzgibbon story over the years…..

PARAIC FANNING – WINNING CAPTAIN AND MANAGER
Few people have had more to do with successful Fitzgibbon Cup squads in the history of the competition than Paraic Fanning.
His first taste of college hurling was as part of the winning Freshers team in 1988, the same year as WIT entered the Fitzgibbon Cup for the first time. In 1989 WIT got to their first Fitzgibbon final, a year later they were beaten in a semi-final and in 1991 they travelled to the Mardyke in Cork to take on UCC with a fancied team and lost out narrowly in a defeat that Paraic admits, “knocked the stuffing out of us.”
Paraic was made captain for the ’92 campaign. “It was my last year. We lost a good few of the ’91 team but we had a great influx of first years that year. The likes of Andy Comerford, PJ Delaney and Brian O’Meara. Back then Colm Bonnar was in charge and he’d put a squad together in September or October and you’d play the league and that during those months but we wouldn’t train that hard. But we’d meet up on December 27 or 28 and from then on it would be serious training all the way to March. We’d be out running up and down the sand dunes in Tramore and all. We’d always play Kilkenny and Waterford in challenge games and usually the All-Ireland club semi-finalists. They were brilliant times. The comraderie, the craic, the spirit, the character. I remember we were training one evening on the field at the back of the college across from Paddy Browne’s Road and we were watching these fellas lying on the roof of the AIB Bank across the road…it turned out they were robbing the place and we’d no idea.”
To win that first Fitzgibbon title, Waterford RTC as they were then, beat Carlow RTC, UCG, UCD and UL. A tough run by anyone’s reckoning.
“We were lucky in the first game against Carlow. We won an unbelievable game against UCD in the semi-final and to be fair we beat UL fairly comfortably in the final. IT was just brilliant. I was lucky to be picked as captain but I was delighted to get that honour and to be always associated with that historic first win is something I’m very proud of. We won the league that year, it was a great team. Probably not an awful lot of household names but it was a serious team and we’ve all became friends for live from it. We met up not so long ago and it was brilliant.
The following year he returned to WIT as GAA officer and he took over the management, still only in his mid twenties, in ’94. “Sure it was a dream job. I spent six months coaching in the schools of East Waterford and six months in the college. I loved it. ’94 was one we probably should have won too. We had a good team and we lost to a UL team that included Brian Lohan, Fergal Hartley and Seanie McMahon amongst others after extra-time.
“I followed Colm (Bonnar) as GAA officer and he had done a great job. The football and camogie were up and running and getting strong by then and I remember one of the first years I was in the job we had 16 teams. We had two Fresher teams in Division One, I think we had 16 or 17 inter-county players. Then Colm came back to do a degree in ’95 and we made him captain. He was brilliant. He was still playing for Tipp at the time and he was mad to win a Fitzgibbon medal as a player as when he played the first time he was here we weren’t in the Fitzgibbon. Colm was great but he was surrounded by serious players, the likes of Fergal McCormack, Peter Barry, PJ Delaney, Tommy Dunne and so many more. That was a cracking team. Ollie Moran was there too but to this day he still slags me because I didn’t start him in the final, I think he must have been injured or something. I know we beat UCD in the final but to be honest I remember the ones we lost clearer than the ones we won.”
Paraic was also part of the WIT management team for the wins in 1999 and 2000 with Tadhg O’Sullivan, Pat O’Sullivan and Donie Nealon. “That was an unbelievable team. Henry Shefflin, Michael Kavanagh, Eamon Corcoran, Paul Curran, Dave Bennett, Damien Joyce, Declan Browne, Andy Moloney, Cathal Murray who won an All-Ireland as coach of the Galway camogie team last year, Willie Maher, Mikey Bevans, who’s part of Liam Cahill’s backroom team with Waterford now and so many more. After that I stepped away as I was still playing myself and I was sick of the sight of grass to be fair. Colm came back in and they won three in four years between 200 and 2006. That was a super period and by then I went to all the games as a fan and enjoyed it just as much.”
As a Fitzgibbon Cup superfan Paraic is very disappointed at how the competition has been diluted. “It’s just a rush job to get it finished and out of the way now. I think it means as much to the players but not to the GAA. Years ago lads were allowed by college students. Even when we had Henry and Michael Kavanagh and all the Kilkenny lads, Brian Cody was always brilliant to deal with. But a couple of seasons ago the Fitzgibbon Final was on the same weekend as the Munster Senior League Final and the Walsh Cup final….madness. It’s a shame because it’s a great competition and there’s no doubt it has done wonders for this college and many others as it has really raised the college’s profile. Students wanted and still do want to come to WIT because of its Fitzgibbon and Ashbourne tradition, there’s no doubt about that and long may it continue.” 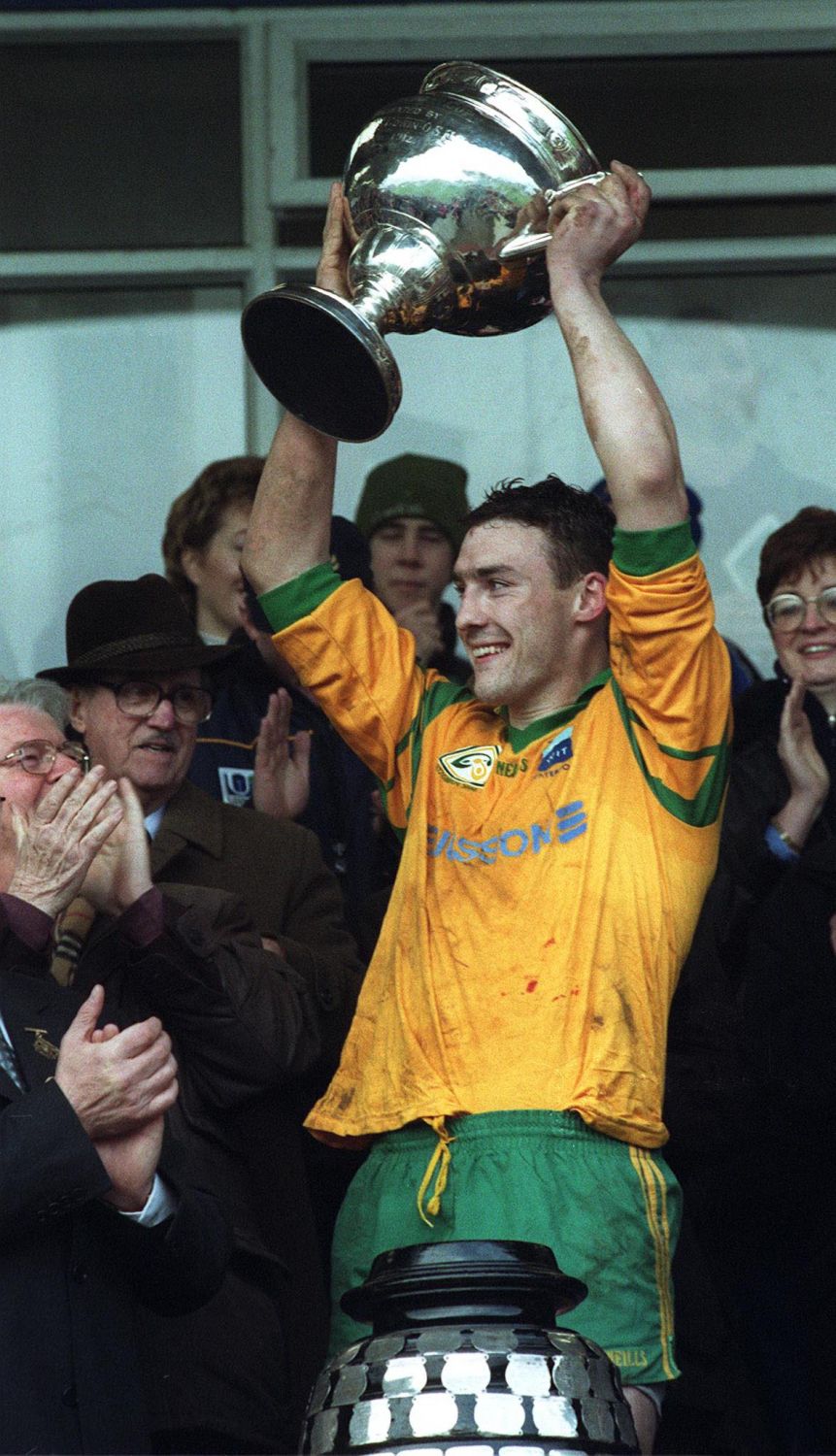 Andy Moloney captained WIT to Fitzgibbon glory in 1999 and 2000.

ANDY MOLONEY – WINNING CAPTAIN IN 1999 & 2000
Speaking on the ’99 win, Moloney said, “It was my greatest honour and achievement to lead WIT to their third Fitzgibbon Cup. The fact that we were the first IT to do so and the last team to win it in the century made the occasion more memorable.”
A year later they made it back to back wins by winning the first cup of the new millennium. “To play alongside players of the calibre of Henry Shefflin, Eamonn Corcoran, Michael Kavanagh and Enda Everard was an experience I will never forget. To win a Fitzgibbon Cup medal was always my ambition entering college and to win two as captain was just unreal.” 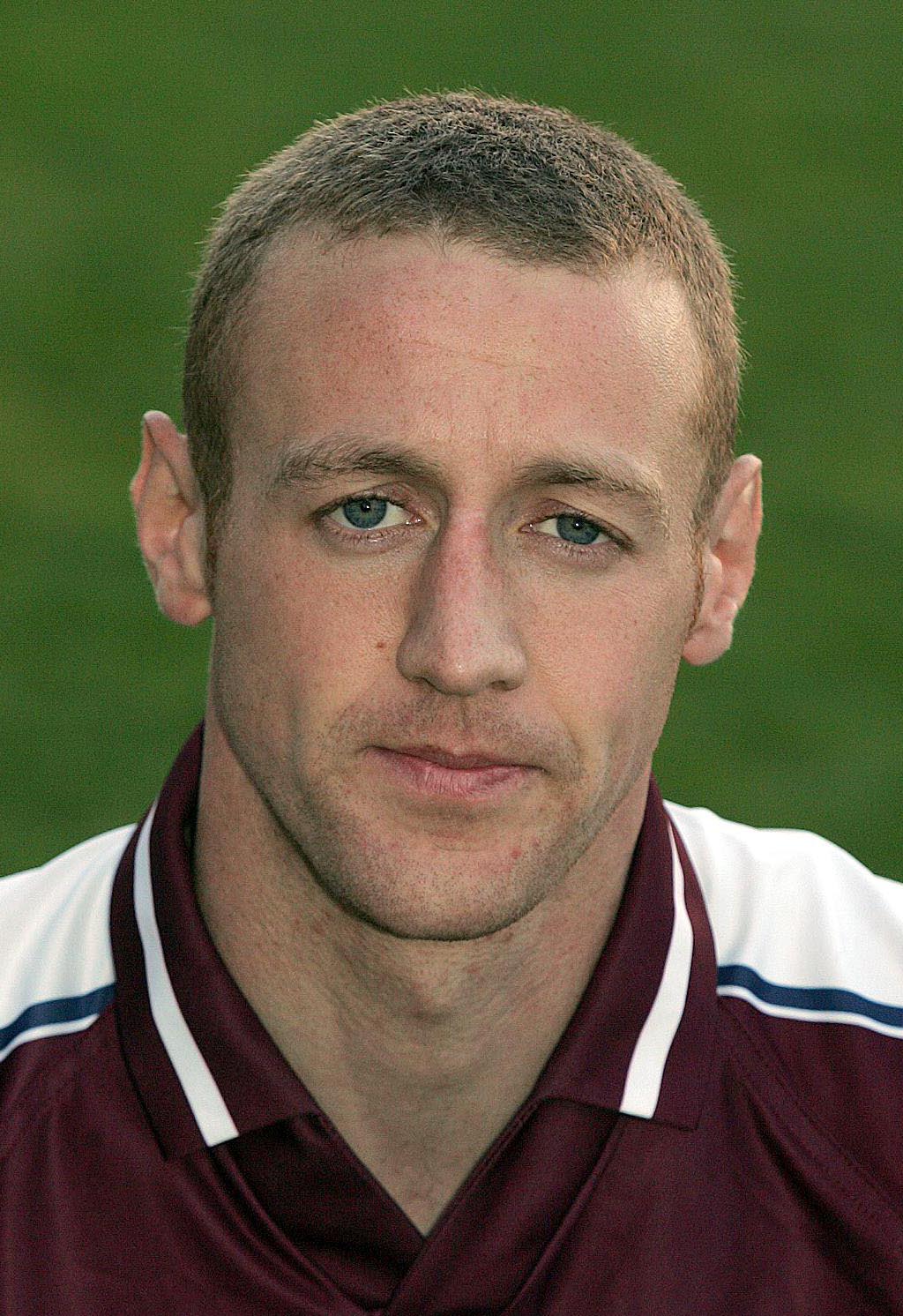 DAMIEN JOYCE (GALWAY) – TWO TIME WINNER
“Entering Waterford IT as a fresher in 1998, I knew little, if anything, about the WIT GAA club. Over the next four years, however, all this would change. The club would become a major part of my life and one of the biggest influences on my career as a player. I was lucky to be in WIT at a time when a good crop of players came together. In my four years we played in three Fitzgibbon finals, winning two, and also winning two senior league titles. Most importantly we would make lifelong friendships with many different characters from every corner of Ireland.
“The memories I have from by time in WIT are many and varied. The Fitzgibbon Cup wins. Andy Moloney’s speech after the ’99 win. The Monday in the Dome after beating UCD in the 2000 Final. Donie Nealon’s pep talks and of course losing the 2002 Final to UL. These memories and tales are replayed over and over whenever a group of us meet up and the stories never grow old.” 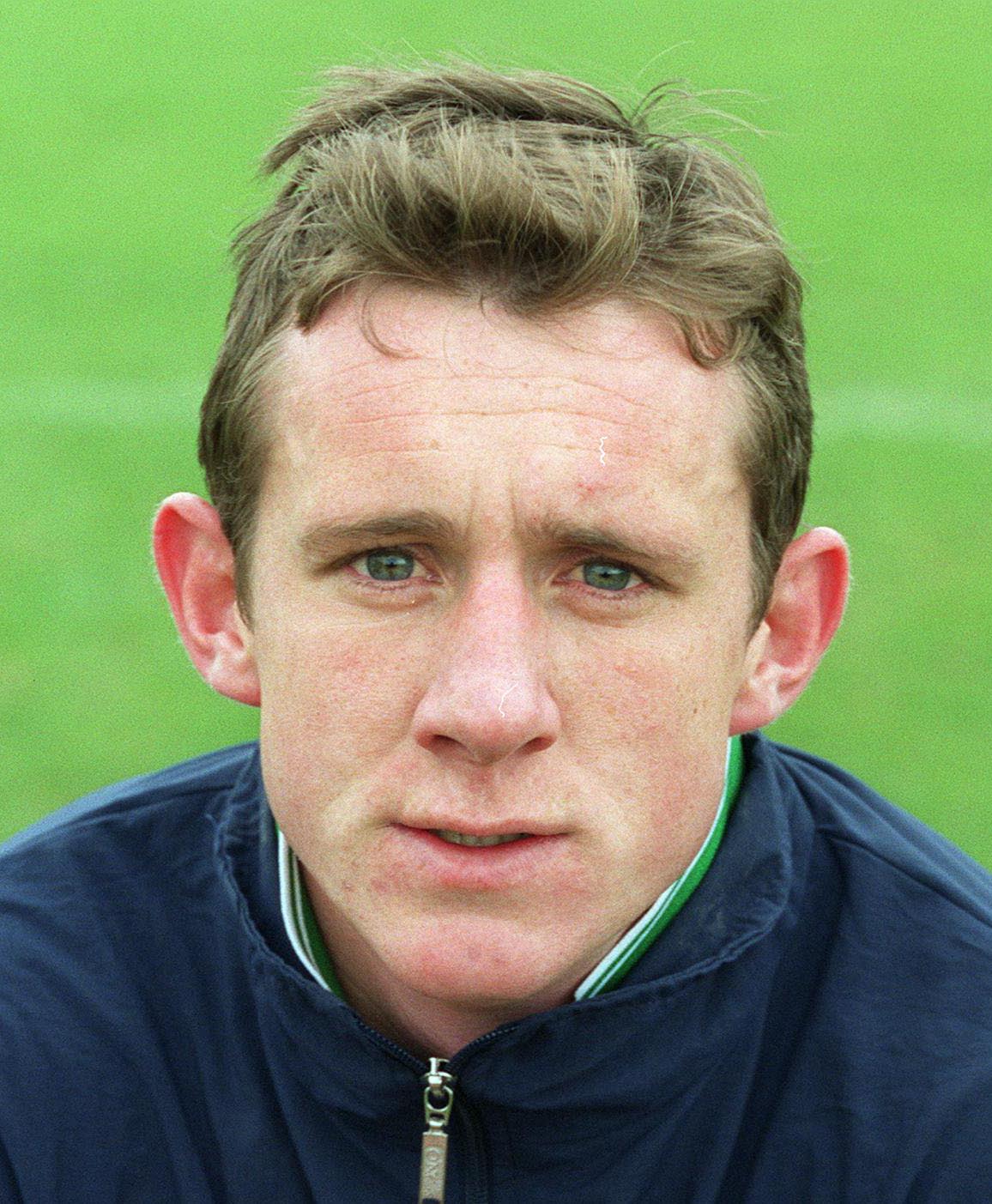 OLLIE MORAN (LIMERICK) – TWO TIME WINNER
Limerick stalwart, Ollie Moran, had two hugely enjoyable stints at Waterford It, winning medals in 1995 and 2003. “In ’95 I was playing more rugby than hurling and I had to content myself with a place on the bench but there was no shame in that with the likes of Colm Bonnar and Tommy Dunne fighting out for places ahead of me.”
After returning to WIT in 2002, Ollie got his hands on another winners’ medal in 2003. “The 2003 final was always going to be a notable one for me since I had been involved with the management side with UL the previous year when they beat WIT in a thrilling final. Added to that I was marking my brother Niall. We played as if our lives depended on it and after an epic battle, we came up trumps. The celebrations that followed rivalled anything seen previously for sheer mayhem. For me the whole thing confirmed for me that WIT is a unique institution, one whose case for university status is unquestionable. I owe a huge amount to the college as regards friendships made, getting on in the world and growing up. On top of that my hurling career would never have taken off but for WIT, a claim that many other former graduates also happily make. Thanks for the memories.” 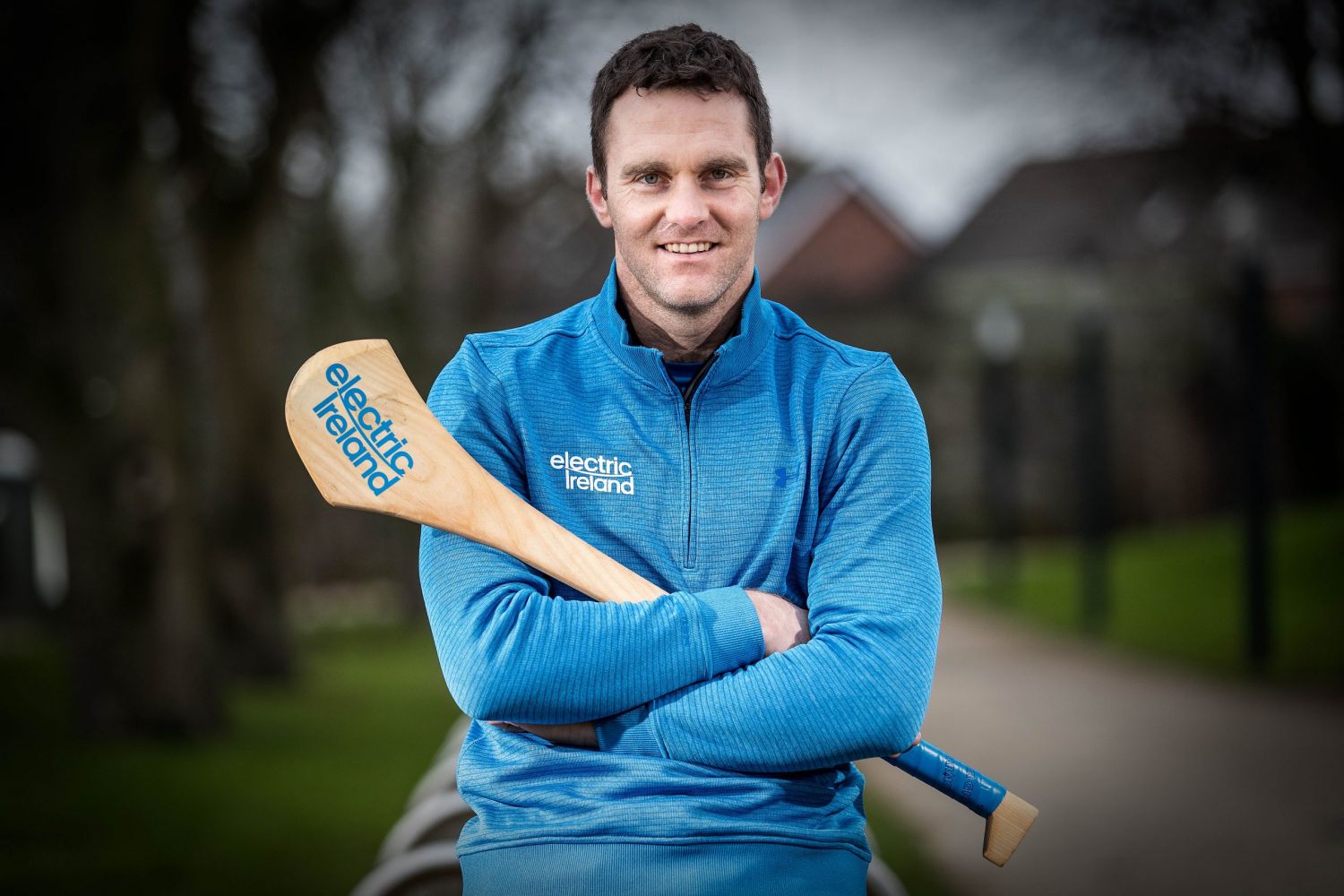 MICHAEL ‘BRICK’WALSH – THREE TIME FITZGIBBON WINNER
“We made the most of what we had, that’s what got us three medals, plain and simple. If we wanted gear then we had to fundraise for it ourselves. But we did it as a group which helped further with team bonding. Also, Colm (Bonnar) was very clever with how we trained as most players were playing inter-county at the time. He ensured that no player was burnt out. There was never too much pressure put on us. Colm used to say to us, ‘It’s your own club and only you yourself will get the benefits.’
* Additional quotes from Conor Phelan’s history of WIT GAA Club book and WLR.