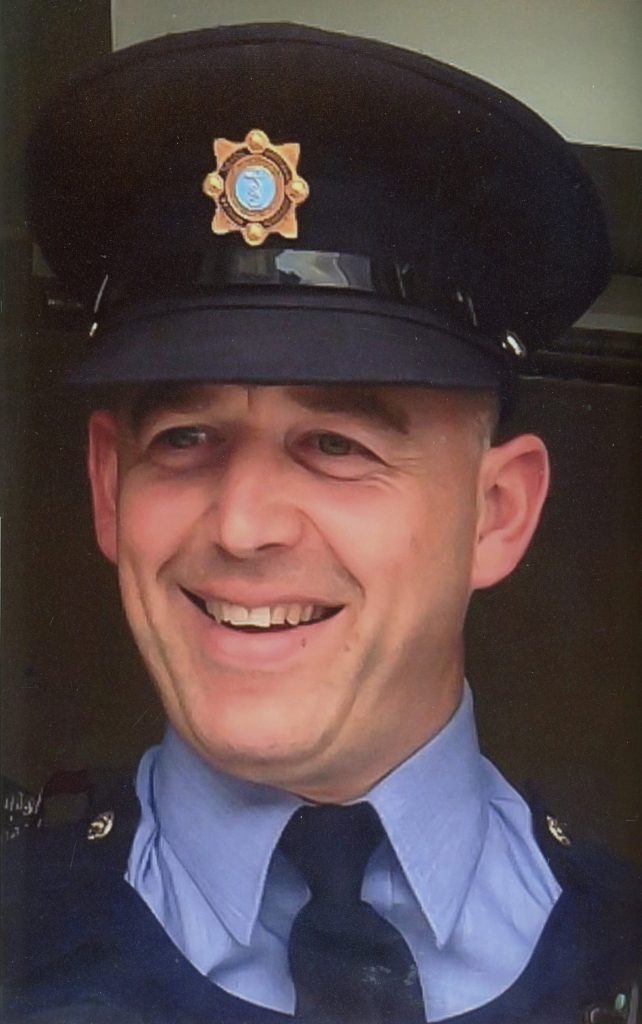 AN off-duty garda who died in a diving tragedy never realised he was about to be promoted to sergeant just weeks later. The revelation came as the Wexford-based family of Dave Hearne (47) paid a moving tribute to the father-of-four to mark his first anniversary.
Garda Hearne, who was based in Waterford, died in a freak diving tragedy off the Wexford coast on this day (May 25) last year. The accident occurred during a recreational dive on a wreck site located some 15km off Hook Head. He was diving at the time with Hook Sub Aqua Club of which he was chairman. Garda Hearne was a former member of the Garda Water Unit but had worked in Waterford over recent years as part of the Garda Traffic Corps.
Hero
The young officer had saved nine people over previous years – including a number of high profile rescues from the River Suir – thanks to his dauntless courage and life-saving skills. This week, his family revealed that they were visited by Garda Commissioner Drew Harris after the tragedy – and he confirmed that Garda Hearne was to have been promoted to sergeant just weeks later. He had passed all his sergeant exams – but died without realising he was to secure the promotion he had worked so hard to achieve.
The Irish Bravery Awards Council paid tribute to Garda Hearne for his courage in helping save lives over the years – and noted that he had proudly followed in the footsteps of his father, Declan, who was also honoured for his own bravery in 1958.
The Hearne family said that the diving tragedy last May had left them totally heartbroken – and they only manage to cope with their grief thanks the incredible outpouring of support from the Wexford and Waterford communities, Garda Hearne’s colleagues and those of his wife, Barbara, as well as ordinary members of the public he had helped.
Thanks
Garda Hearne’s mother, Gemma, said they were taken aback by just how many people her son had helped over the course of his all-too-short life.
“We wish to thank everyone for the kindness, sympathy, support and love,” she said. “We have been comforted by the number of people whose lives Dave touched both professionally and privately. We have drawn great solace from so many stories of his humble capability and wisdom – his unrelenting bravery and strength, and of course his mischievousness.”
His sister, Brighid, said they were deeply touched by the high regard in which her brother was held.
“All who spoke of him paid tribute to his loyalty to colleagues, to family, friends, and to people whom he served in his role as a member of An Gárda Síochána.”
His sister, Maeve, said the family were totally bowled over by the incredible public support shown to them after the terrible tragedy last summer.
“Letters, Mass Cards and floral tributes have brought great comfort to us all,” she said. “Family, friends, colleagues and acquaintances travelled from all over the country and from abroad to share our sadness during his wake and funeral Mass.”
She said that his family have kept his wife, Barbara, and his four children, Dylan, Toby, Noah and Libby at the centre of their thoughts and prayers.
The family paid a special thanks to those who tried to assist Garda Hearne on May 25 from Gerry Campion and the members of Hook Sub Aqua Club to the personnel of the Naval Service patrol ship LE Orla and the crew of the Coast Guard’s Waterford-based Rescue 117 helicopter whose subsequent ‘nose dip’ salute over Duncannon graveyard as Garda Hearne’s coffin was lowered was particularly poignant.
The family said words cannot express their gratitude to his garda colleagues especially for their cortege escort from Waterford, funeral tributes and the guard of honour at Duncannon graveyard.
“We also wish to acknowledge the attendance of Captain Shane Flood, Aide-de-Camp to President Michael D Higgins.”
“These words from Julius Caesar, taken from one of the eulogies, were very fitting because for us they capture perfectly his essence,” Gemma added. “His life was gentle and the elements mixed so well in him that Nature
might stand up and say to all the world: ‘This was a man’.”
Garda Hearne’s first anniversary Mass will be arranged at a later date.