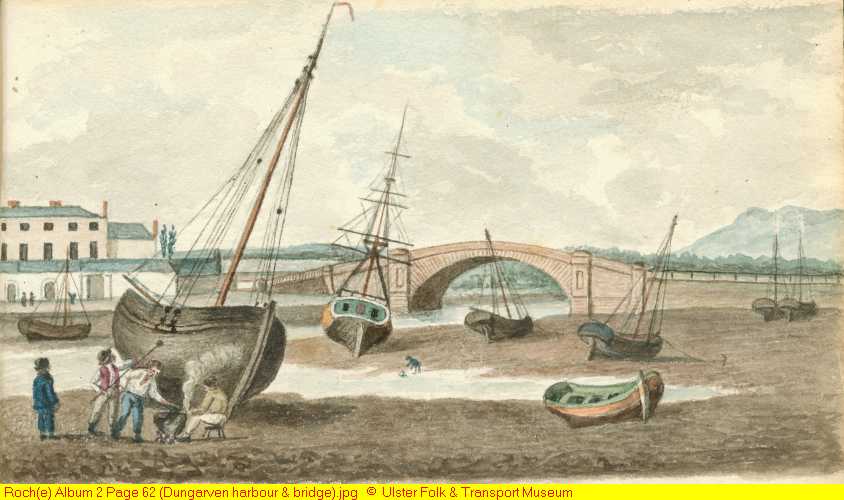 ORIGINALLY published by Waterford County Museum in 1996, the book “Desperate Haven” is the definitive study to date of the Great Famine and its effects in the towns and villages of West Waterford. This long out of print and much sought-after book is now available to purchase in paperback or digital format online from Amazon. This week our excerpts from the book look at the slow demise of the fishing industry in Dungarvan and the development of the fishing tradition in An Rinn.

Dungarvan had been a notable fishing town for centuries exporting fish throughout the British Isles and to the Continent. The industry remained prosperous until 1830 when the bounties (government loans for repair and of boats and equipment) were withdrawn. The Commissioners on Irish Fisheries report of 1836 noted that the withdrawal of the bounties had resulted in the decline of the fisheries. Concerning Dungarvan the report noted that the industry “brought great wealth into the town and very much increased the buildings and other improvements of the town”.

“At Abbeyside… most of the fishermen occupy small allotments of land and are comparatively thriving, prosperous and industrious. Their boats generally well found and themselves and families well clothed. They rarely ever want food, as the application…to the portions of land which they hold, generally gives them an abundance, and the best moral effects are produced by constant employment and the want of time to go to the public house. On the western side (Dungarvan town) the fishermen have comfortable houses built for them by the Duke of Devonshire and are subject to only a nominal rent, but they are huddled up into a dense community and have no land, nor can they obtain it… They are therefore solely dependent on the market for food, always unemployed when not at sea, liable to idle improvident and intemperate habits, often starving and rarely above want. The materials for their boats bad, and as well as their clothes and bed clothes often in pawn.”

Andrew Carbery, a Dungarvan merchant, told the Commissioners that there were about 70 half-decked vessels in the town, but that only one third were seaworthy. He also informed them that 2,300 people were employed in various aspects of the fishing industry. Carbery was an important supporter of the Dungarvan fishermen. The Waterford Freeman of December 21, 1846 praised his work in helping the poor of the town, noting that he had obtained a loan of £1,000 to employ the fishermen in breaking stones.

In coastal districts fish, usually herring, was eaten along with potatoes. The severe weather conditions of 1845/46 prevented the fishermen going to sea, particularly in boats which were in poor repair. Many fishermen had pawned their gear in the hope of recovering it the following year. Boats, oars, etc., were burned for fuel. As a result the supply of fish became scarce and prices went up, putting it out of the reach of the poor. Other sea foods were accessible at low tide, such as limpets and seaweeds, but supplies did not last long with the large numbers picking them. 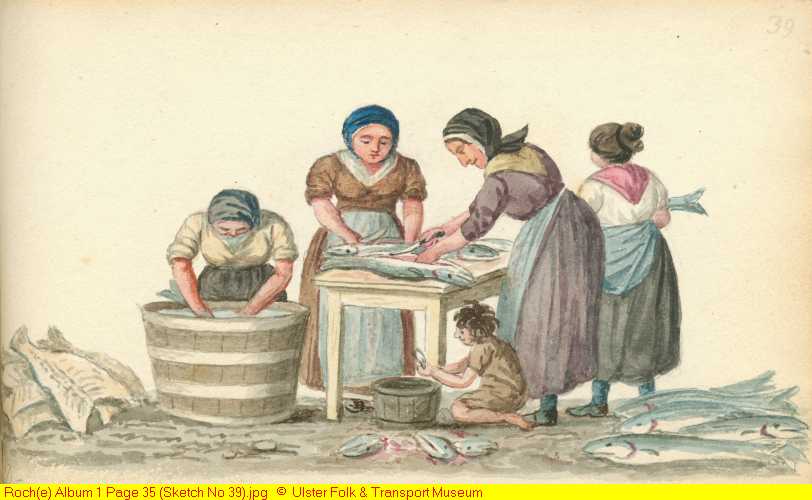 Joulters processing the catch in Dungarvan. Roch was known for the accuracy of his depictions of the clothes and occupations of his subjects. Image: Samson Towgood Roch © Ulster Museum

The Waterford Freeman reported in March 1847 that people were picking Doolamaun (seaweed) on the beach in Dungarvan and eating it raw.

In May 1847 the local military were praised for their work in assisting the Dungarvan fishermen. Major Gordon of the 47th Regiment (The Loyal North Lancashire Regiment) gave ten shillings to the crew of each fishing boat to enable them to go to sea.

In November of 1849 William Edwards of Helvick Fishing Station remarked that: “the fishermen are literally starving, not for the want of fish, but for want of proper fishing boats and fishing tackle, fit for deep water.” He noted that their boats were too small, without sails or compass. He praised the work of the Society of Friends: “they have given a good help to the people here; the one half of the people would have been in their graves had they not looked upon them in their misery.”

The Munster Citizen of 1852 carried a report of a Dungarvan fisherman, Patrick Whelan, who had applied for admission to the Workhouse: “I struggled and starved to keep myself out of the poor-house all the winter – I even pledged my nets, so that I cannot earn a penny now.”

By 1861 the Commissioners on Irish Fisheries noted that, there has grown up on the opposite shore of the bay, at Ring, a prosperous little fishing village community which promises to rival Dungarvan at its best days.

In 1843 there was an average of six to eight men fishing from each of the Dungarvan boats, but by 1864 it was down to five. In 1865 the Commissioners noted that the Dungarvan fishermen were mostly composed of young boys and old men, the latter of whom went to the Workhouse in winter. In contrast the Ring fishermen were described as young and able-bodied.

The population of Ring in 1848 was about 3,000, most of whom were employed in the fishing industry. Many of them also had a small area of land set with potatoes.

The Ring fishermen were also badly affected by the Famine but their situation changed dramatically due to the intervention of the Society of Friends (Quakers) and the local Church of Ireland vicar, the Rev. James Alcock (1805-1893).

In 1846 the Rev. Alcock contacted the Auxiliary Relief Committee of the Society of Friends in Waterford to obtain aid for the Ring fishermen. Joshua W. Strangman was appointed to organise the aid along with the Rev. Alcock. Weekly supplies of meal were given to the fishermen and they were also given loans ranging from 10 shillings to £3 for repair of their boats and for purchasing gear. By 1847 the crews of 49 boats were able to support their families.

By April 1848 it was reported that there was no destitution in the area and that the fishermen were “provided by sufficient supply of fishing gear for their immediate wants and therefore are constantly employed whenever fishing permits.”

The Society of Friends also introduced new fishing methods and supplied the fishermen with special clothing to enable them to fish in all weathers. In contrast to this the Dungarvan men were still fishing with hand lines and entered the Workhouse for the winter.

In December 1849 it was noted that 30,000 fish valued at £500 were caught at Ring involving 45 boats. In the same month it was said that there were no paupers in Ring: “Whilst misery and starvation prevail in the surrounding parts of the Union (Workhouse District); the fishermen’s houses, furniture and clothing are all most comfortable; the committee (Society of Friends) having given prizes of aprons for the best kept cottages.”

The Rev. James Alcock, the Scourge of the Famine

The Rev. Alcock died at Seaview House on March 23, 1893 age 88. A monument was later erected over his grave in St. Nicholas’s cemetery with the following inscription:-

“The Rev. Alcock A.M. who for 60 years was the faithful and zealous vicar of this parish for the above period, during the scourge of the Famine and Cholera he proved himself the generous friend, the wise guide and councillor of the sick, distressed and afflicted of all classes and creeds. As he lived he died the humble Christian respected and lamented by a large circle on March 23, 1893. Aged 88 years.”

Illustrations of the Dungarvan Fishing Industry 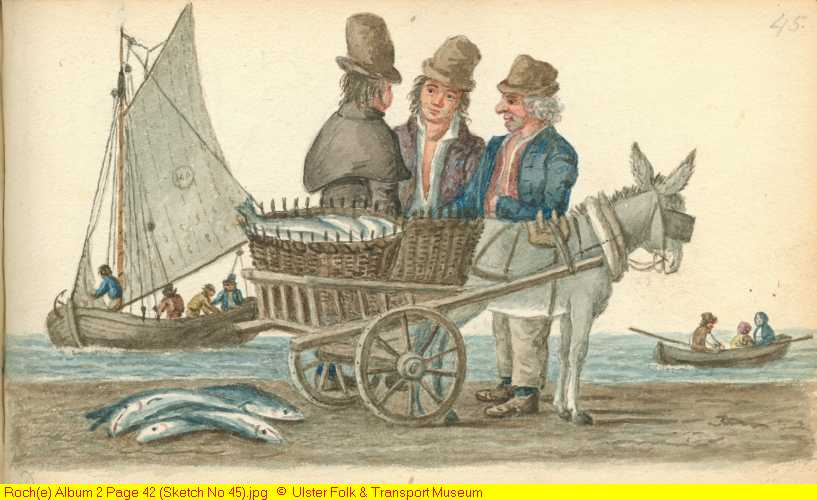 The illustrations in this article are by famous local miniature portrait painter, Samson Towgood Roch. In 1828 he took his sketchpad with him while visiting Dungarvan and gave us the first colour images of locals. His original sketches are described as “…one of the most significant and yet understated items from the entire Ulster Folk & Transport Museum collection.” The images are playful, simple and of historic interest. Roch’s sketches are very democratic, including women and working-class people, two groupings that are very underrepresented in our history. These images do not appear in “Desperate Haven” as the book is not illustrated.

Desperate Haven the paperback book is priced at €18.50 and the digital version is priced at €9.10 (free to Amazon Prime members) both available to buy online from Amazon http://mybook.to/desperatehaven or search for “desperate haven waterford”.

NEXT WEEK: Famine in West Waterford: The Aftermath