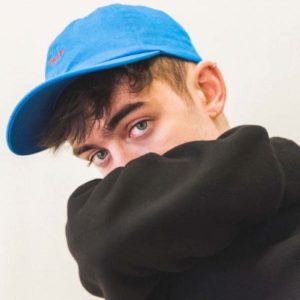 Alex Gough, at just 21-years-of-age is one of the most talked about artists of a new backdrop in the Irish music scene. His single, ‘Dear SJ’ features on the Normal People soundtrack, putting Waterford in a very strong position at a time when the arts need vital recognition.

Gough is in his final year of the Cork School of Music, and we have already seen the 21-year-old play gigs at Electric Picnic, the Good Karma Club in London, and a 2020 appearance scheduled at Europe’s Eurosonic festival.

The crisp clarity of his lyrics offers a stripped down, raw musical experience, with a gritty edge and a musical progression showing Gough on the cusp of a new Irish scene.

The critically acclaimed 12-part TV adaptation of Sally Rooney’s Normal People, offers a wealth of Irish talent, both dramatic and artistic. A homegrown feel complements the Sligo and Dublin landscapes and offers an authentic experience.

The artist’s album, 80% hit an astonishing one million streams today, May 26, with viewers of the show being particularly struck with the lyrics of Dear SJ. Gough said,
“The concept for this EP was formed after realising a lot of the subject matter of songs I listened to or wrote myself was quite negative. The EP consists of 80% negative connotations and a slightly unfortunate 20% positive. But I guess that’s life. I also viewed the 80% as some kind of journey, hence the progress bar. The EP pans out across a day, a journey through the positive and negative of sorts.”

Viewers will recognise that pattern with the narratives of Marianne and Connell, and the battle between positivity and negativity.

His arresting lyrics, ‘This is madness
Care about other lives more than we care about our own
We don’t care about people as much as we care about our phones
Yeah, open your eyes, take a look around, speak after the tone,’ speaking volumes about how life moves on around us, regardless.

Waterford will undoubtedly tune in proudly to Normal People, knowing that there is more than a little piece of Waterford in there.

Paul Mescal: The road from Waterford to Normal People