AFTER being stranded on the world’s biggest passenger cruise ship for 66 days off the coast of Miami, isolated in a cabin alone for the most part due to a Covid-19 lockdown, 24-year-old Peter Smyth, from Grantstown Village, Waterford city, is finally home.

Speaking to the Waterford News & Star yesterday, Peter told of his immense relief that the prolonged ordeal is finally over and recounted the incredible strain of being isolated in a cabin, and told over and again he would get to disembark only for it to change at the last minute.

Opportunity of a lifetime

Having graduated college, Peter went travelling, eventually getting a job in December of last year with Royal Caribbean as a member of the Youth Staff on the Symphony of the Seas – the world’s biggest passenger cruise ship. 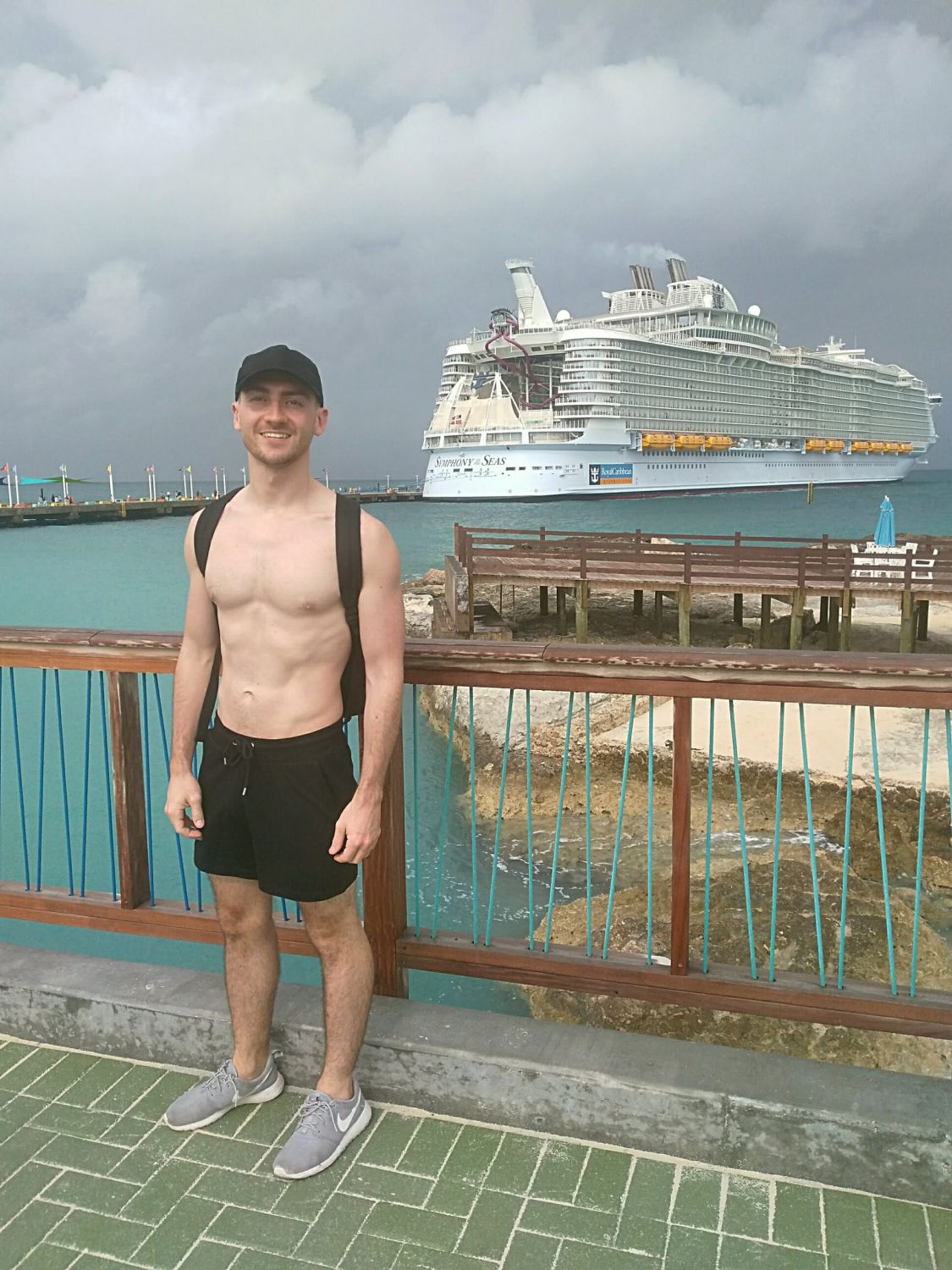 “I really loved the job, it was great travelling around and stopping off in all the ports,” he recalled.

However, come March 14 life onboard drastically changed because of the Covid-19 pandemic. All cruise ships cancelled sailings for a 30-day period. The guests disembarked from the Symphony of the Seas after a weeklong cruise, but the crew weren’t allowed off and had to stay on board for a further 14 days.

“The ship hadn’t gone into lockdown at that stage. We were counting down the days, and as we were on the ship and no one was allowed on board we thought we should be fine. As the days were going on we were getting more hopeful.

“About 10 days in Royal Caribbean announced that they had terminated everyone’s contract and they would be sending everyone home in the next few days.”

On day 14 Peter recalled sitting out enjoying the sun when the captain announced that there was a positive case of Covid-19 and the ship was to go into lockdown for a further two weeks. Sadly, the crewmember, who had been evacuated from the ship, died from the deadly coronavirus.

With the crew fearing there would be more positive cases, Peter was moved into a guest cabin to self-isolate. Initially, he was pleased as he had a balcony with a sea view, but the novelty soon started to wear off. 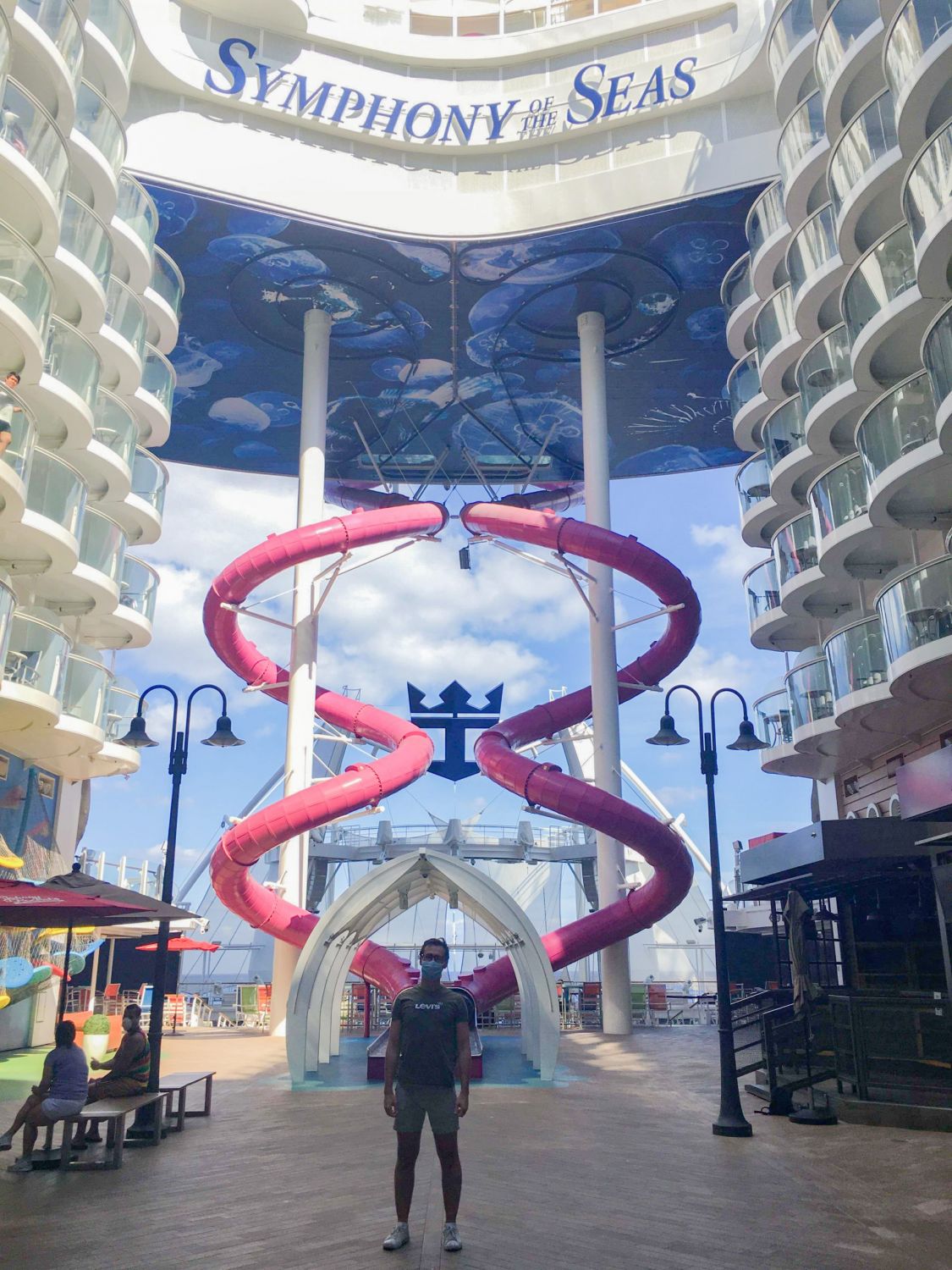 “We were told it would be two weeks and we would be left out. The cases kept increasing, people were getting sick and the lockdown kept being extended.”

Although the experience was mentally draining, Peter said he couldn’t have done it without the support of his colleagues’ on board who helped keep each other sane.

“I wasn’t the only one in that situation. I had a phone in my room that I could call my friends in different rooms. We kept checking up on each other. I obviously had down days where I’d lie in bed and wouldn’t open the curtains,” Peter admitted, saying they regularly received news of flights home that didn’t happen.

During that time they also found out that the Centers for Disease Control and Prevention (CDC) in America had supposedly banned all crew members on ships from coming into the U.S. and flying home from there.

Despite all that was going on Peter had his good days on board where he felt motivated to exercise, draw or watch movies. Although, to his dismay the Wifi kept cutting out, which made it difficult to stream online or video calls home. “It was tricky, but we made it work,” he said.

Naturally, Peter’s parents Carmel and David were worried about their son. “I was obviously not telling them everything as I didn’t want them worrying too much,” Peter said.

Every day, breakfast, lunch and dinner were dropped outside his cabin, but Peter said there was no choice when it came to meals. Not being a fan of boiled eggs, Peter used to roll the egg through the balcony to one of his friends, who didn’t like the other offerings. “We found little ways of getting by, he said. His only other human interaction was getting his temperature checked twice a day. 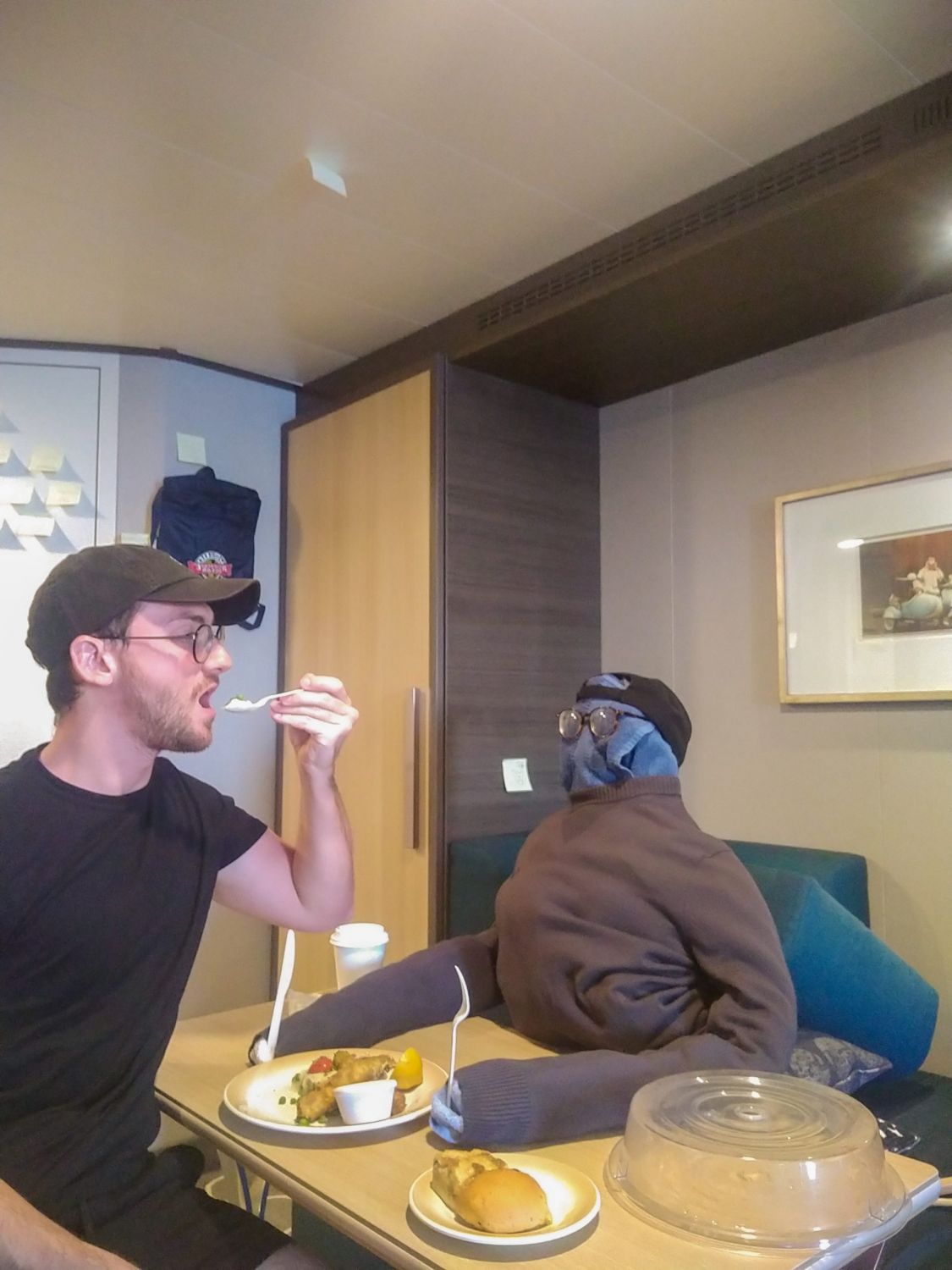 To get through the 66 days on board Peter relied on his strong support network, but said some people struggled. It’s been widely reported that a number of people stranded on cruise ships across the globe have died by suicide.

Crew members, who have families to support, also faced the added pressure of not being paid. In Peter’s case Royal Caribbean gave him $13 a day up to a maximum of $400.

Eventually, Covid-19 cases started to dwindle and the ship was Coronavirus free for a period of three weeks. At this stage they were allowed to leave their cabins to walk around for a short period, but the CDC wouldn’t let anyone off, even the Americans, he said.

Every time they were told they would be flying home they packed their bags, but the next day the flight was cancelled by the CDC or the border control wouldn’t clear people to disembark. 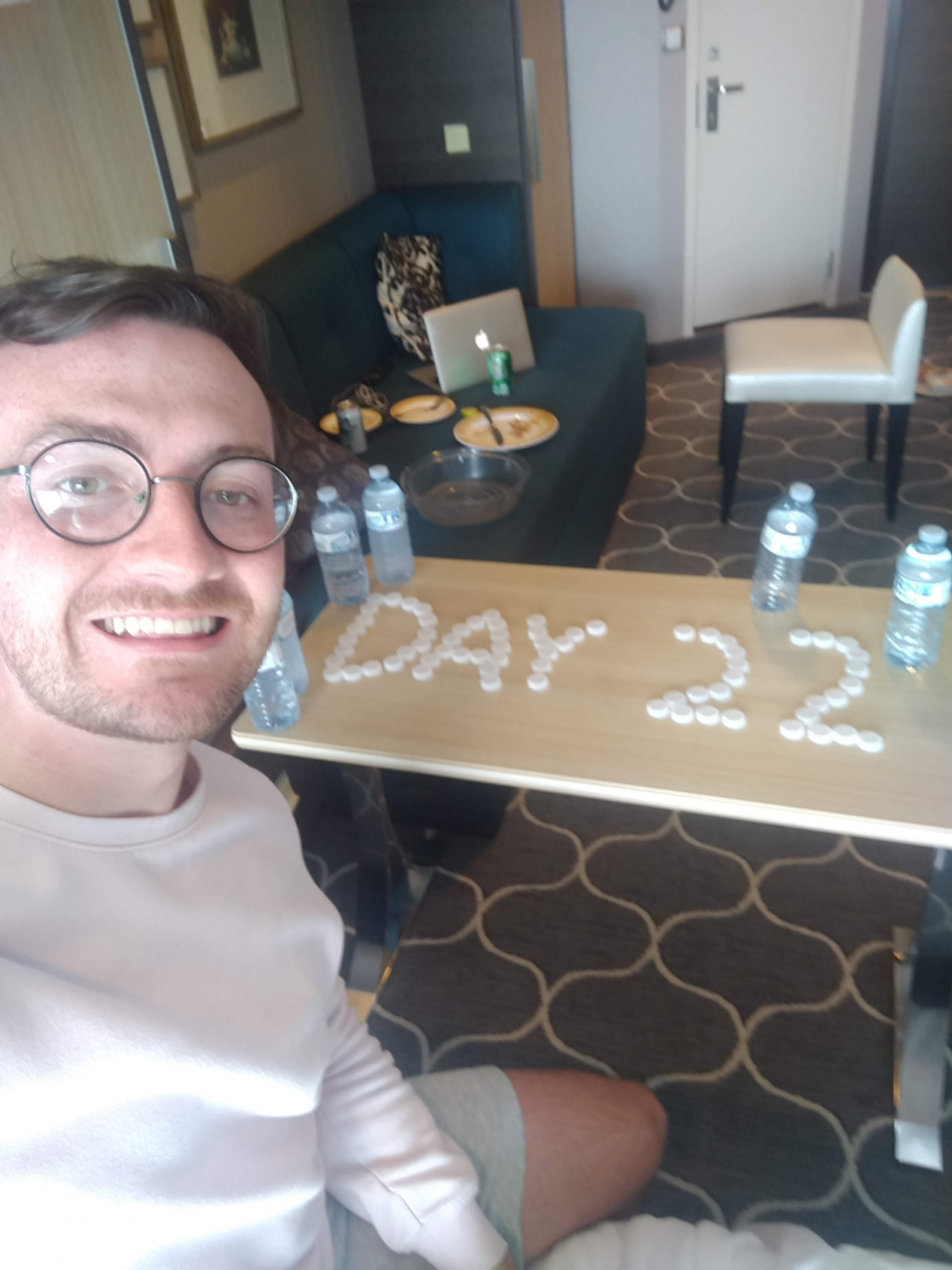 Eventually his British friends were booked to fly home on May 18, but Peter was told he was going to be put on a smaller boat to be sailed across to the UK. At this point Peter’s parents contacted Matt Shanahan TD, who reached out to Ambassador of Ireland to the United States of America and fellow Waterford man Daniel Mulhall, while Peter directly contacted Consul General Shane Stephens of the Atlanta Consulate. Grateful for their assistance, Peter said, “Without them I’d probably be still on a ship right now. I wasn’t allowed on the flight until they contacted a few people.”

Once the crew reached dry land and disembarked they were put on a bus and transported to Miami International Airport. The bus drove straight onto the runway where they boarded a flight to Heathrow in London. Peter, three other Irish citizens and Scottish citizens were put up in a hotel for the night before being driven to Hollyhead where they were told they had to get a ferry home. 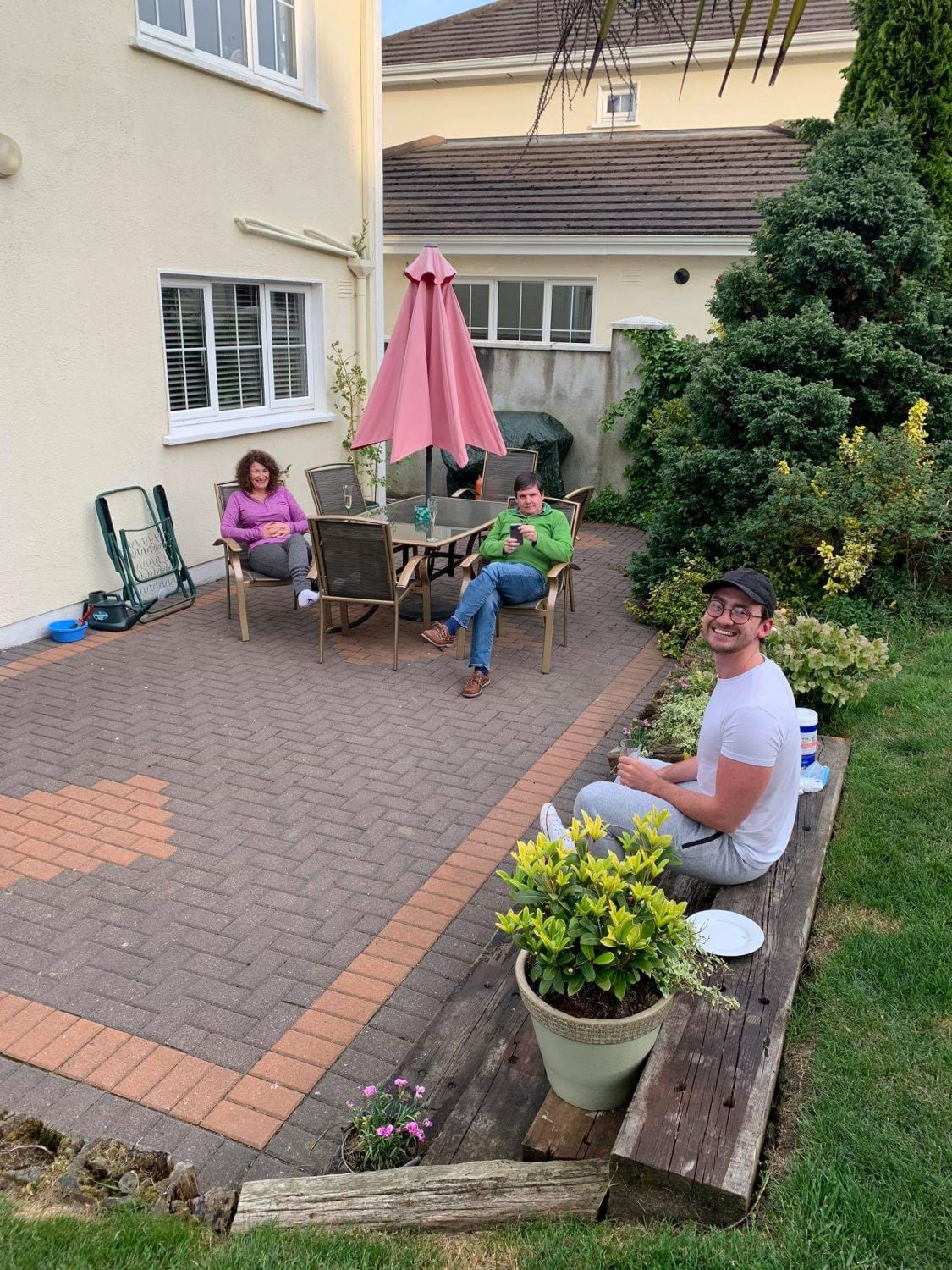 In Dublin on May 20 Peter’s brother Gary was waiting for him when he arrived. “It wasn’t this big moment as I couldn’t hug him…I had my mask and everything on,” Peter said.

As soon as Peter arrived home in Waterford all his clothes went into the washing machine, and his mother greeted him with champagne. After a quick drink an exhausted Peter went to bed. Once his two-week period of self-isolation is over, Peter plans on giving his parents a hug. “Everyone has to follow the rules, there’s no exception,” he said.

Speaking of the best things about being home, he said, “It’s nice to have unlimited food that I want to eat… The wifi speed is amazing. It sounds silly, but it opens up entertainment while I’m self-isolating right now.”

Not anticipating a return to cruise ships in the near future, Peter is most looking forward to catching up with friends in the park over a picnic. “Even simple things like that will be nice,” he said.

Woodstown becomes site for staycations as public camp out