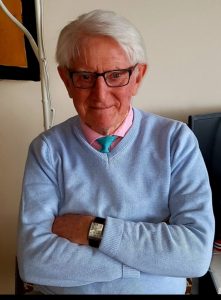 IT is with deepest regret that we announce the death of Noel Griffin (84), late of Bishopsgrove, Ferrybank, who died on Saturday, May 2, following a short illness. Noel is survived by his wife, Helen, his sister Maura, his daughters Joanne, Gemma and Elaine, and his sons, Robert and Philip.

It is poignant that Noel made his final journey from his daughter’s residence to the church as family was at the heart of all that motivated Noel. Throughout his life, he lived for his children and having Noel as a Dad meant always having time for fun and games. As his family expanded, with the welcome addition of his beloved grandchildren, Ciara, Daniel, Siún, Aoibhínn, Dario, James, Nell and Levi, Noel carved a new role as the grandad who pushed the swings, played football and always encouraged imagination and play.

35 years of his life were spent working in Waterford Crystal from the age of 15, where he shaped his craft and became a master cutter. The love Noel had for his artistry and craft was evident, not only in the effortless carving of each cut in the crystal, but in the many friendships he forged there. The memories made in the walls of Waterford Crystal were a source of great comfort and happiness to Noel when his 35 years there ended.

Noel is possibly most well known for his involvement with Waterford FC, playing in Waterford FC’s first ever League of Ireland winning team of 1965/66.
After starting his Schoolboy soccer career with Waterford Bohemians, the talented defender continued his rise through the ranks with the Ben Wadding Club before moving to Waterford FC back in 1957 where he made great strides in his footballing story.
His first manager at the Blues was Alex Stevenson, who was a major influence on Noel’s early days at the Blues where he along with both Alfie Hale and Seamie Casey were part of the Republic of Ireland Amateur side that played Scotland in 1957 with all three men also playing against Holland two years later.
Noel will be most remembered as the central defender that helped carve the way for Waterford’s first League title back in 1965/66 under Paddy Coad before he went onto win another league title two years later and was also part of the successful period that continued into the early 1970s.
When his League of Ireland career was over, he made the move across the bridge to live in Bishopsgrove in Ferrybank where he became part of the local club as a player, manager, coach, mentor, committee member, who strived to make sure that the club flourished.

For many, retirement can mean stepping back into a more relaxed way of life, but the ghost of Noel’s earlier soccer days in Bohemians, Waterford FC and Ireland amateur followed him and his sons, Robert and Philip, also went on to play for Waterford United.

It was always clear that Noel’s gentle encouragement and boundless love for his family stemmed from a place of great pride in his loved ones.

These sunny days always bring a temptation for the seaside, for sand, and the aroma of beachside food. If Noel had survived to see this summer, that’s one thing he would have done, and on Sunday, January 26, Noel took his final spin to Tramore with his family. He sat on the slip in Tramore with his favourite fish and chips and said, “it’s really lovely here.”

That was a life well lived, to be able to sit and watch the sea, reflecting on a history of his childhood trips to the beach on the Tramore train with his father Robert and mother Hannah, reflecting on his marriage, the birth of his children, and eventually his grandchild. To be able to look back on 84 years of a life happily spent, and say “it’s really lovely here” is the measure of a contented family man.

In Noel’s final days, both he and his family received great comfort in the dignity and support offered to them by the staff of University Hospital Waterford, particularly on Orthopaedic 2. Teams of staff overseen by Mr Terence Murphy and Prof. Ríona Mulcahy offered care and kindness. GP’s, Dr. Katie O’Reilly, Dr. Katie Maher and Dr. Mark Rowe visited, bringing not just medical assistance and advice but chat, distraction and support, particularly to Noel’s daughter, Gemma.

A wealth of support was extended to the family and to Noel, from Pine Grove, Ladylane, Deise Café, Mindful Chorus, Home Instead and many others. This wide network of support is testament to the high esteem with which Noel was held, and the many lives affected on May 2, on Noel’s final day.