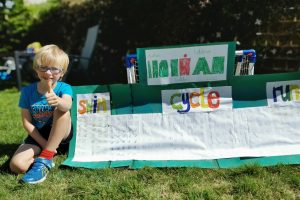 SIX-year-old Charlie Colquhoun from Waterford is currently heading into his fourth week of an Ironman Challenge.
When their family holiday to Spain was cancelled earlier this year, Charlie was disappointed that he wouldn’t be able to cheer on his father, Simon at the Ironman Challenge he was due to compete in.
Deciding that he wanted to do his own challenge here in Ireland, Charlie sat down with his dad, Simon and mum, Annie and began to plan a monumental undertaking.
From May 1 all the way through to July 1, Charlie will cycle a staggering 180km, run 40km, and swim 4km. The swimming pools are closed, and the sea is outside the family’s 5km radius, so Charlie will complete 2,000 press-ups instead of swimming 4km.
An avid exercise fan, Charlie has been spending his mornings since May 1 completing press-ups, “until I get tired” and cycling. He also loves filling his days with rugby, football, dancing, trampolining and playing catch.
The challenge is also doubling up as a fundraising drive for Barnardos, and at the time of writing, Charlie had raised in excess of €2800, lapping (and then some) the original target of €500.
The family have cited their decision to donate to Barnardos as being fuelled from the additional pressures which are experienced by families at present during the pandemic.
Charlie’s dad is a doctor, with a background in sports science, meaning the young athlete is in excellent hands. While the original plan was for Charlie to cheer on his dad at the finish line in Spain, instead, Simon and Annie will be willing their son to the finish line come July 1!