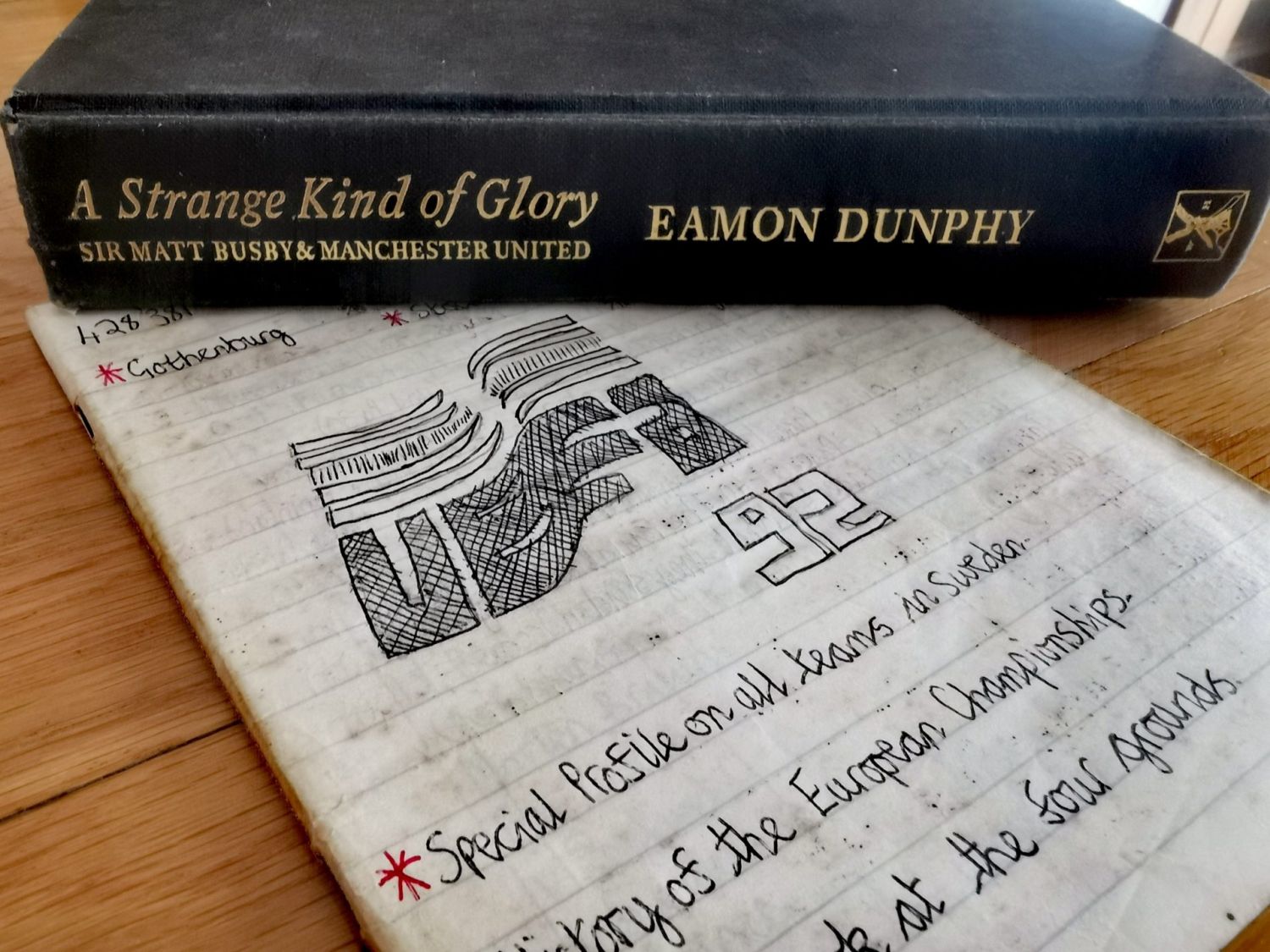 Preparatory work for my ‘View From The Blue’ column.

Tuesday, May 26, 4:52pm: As I work on my ‘View From The Blue’ column for next Tuesday’s print edition, it occurs to me that this week marks my 21st year in journalism. I’m also a week shy of my first anniversary with the Waterford News & Star, a move I’m delighted I had the opportunity to take. It’s been an interesting 12 months to put it mildly. Heaven only knows what lies in store over the next year. 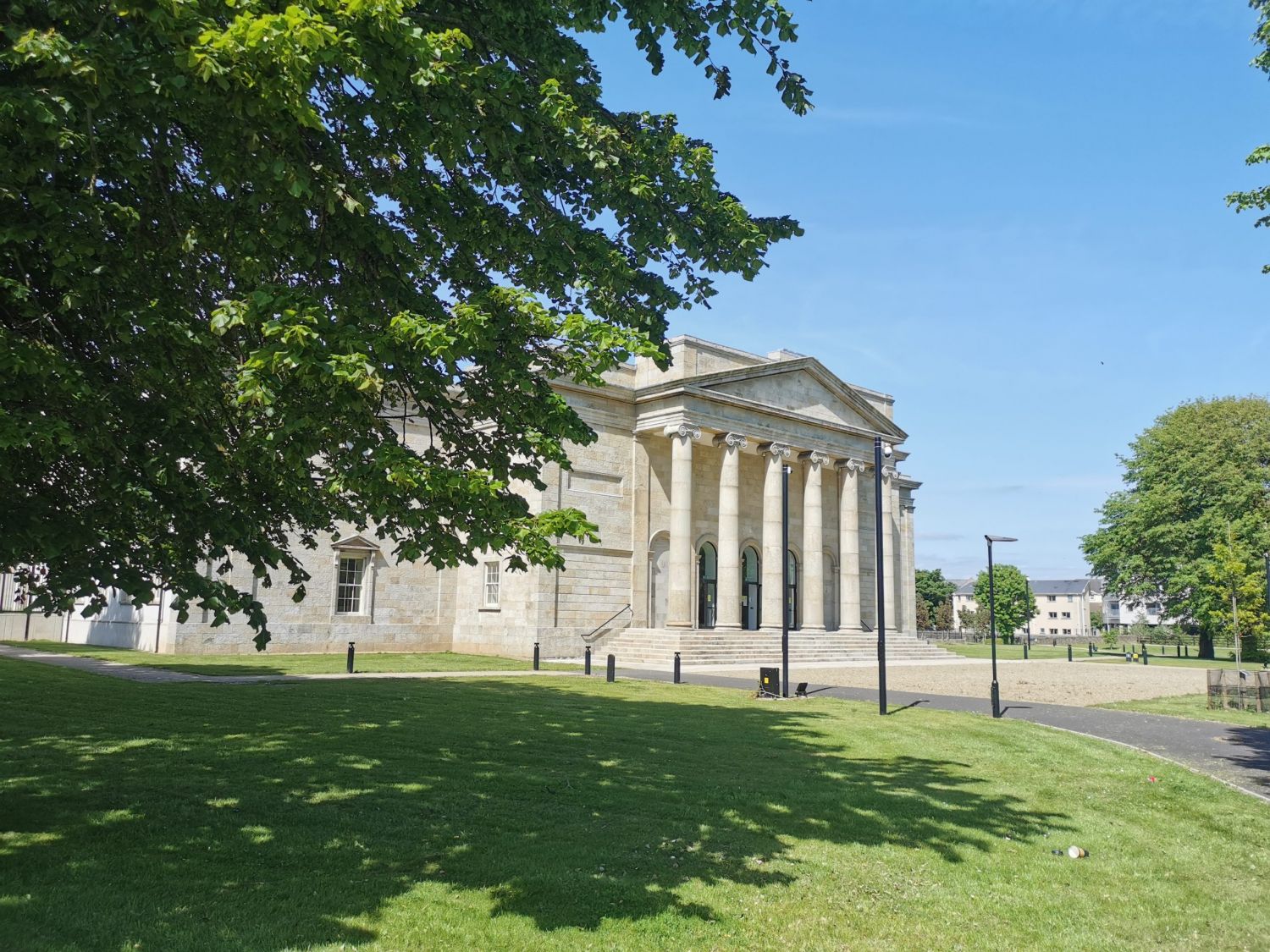 Wednesday, May 27, 3:30pm: I leave the courthouse behind me on a glorious day and head for my car in the largely empty Waterside Car Park. As I clamber into my Volvo, I notice a man lying down on the car park surface to my left, about 75 yards away. He’s flat on his back, shirtless, wearing what appears to be a rudimentary hat along with a face mask. He appears to be doing some floor exercises as he rotates both legs, offering a thumbs up to a disembarked cyclist on the other side of the railing. He appears to be thoroughly enjoying his day. More power to him. 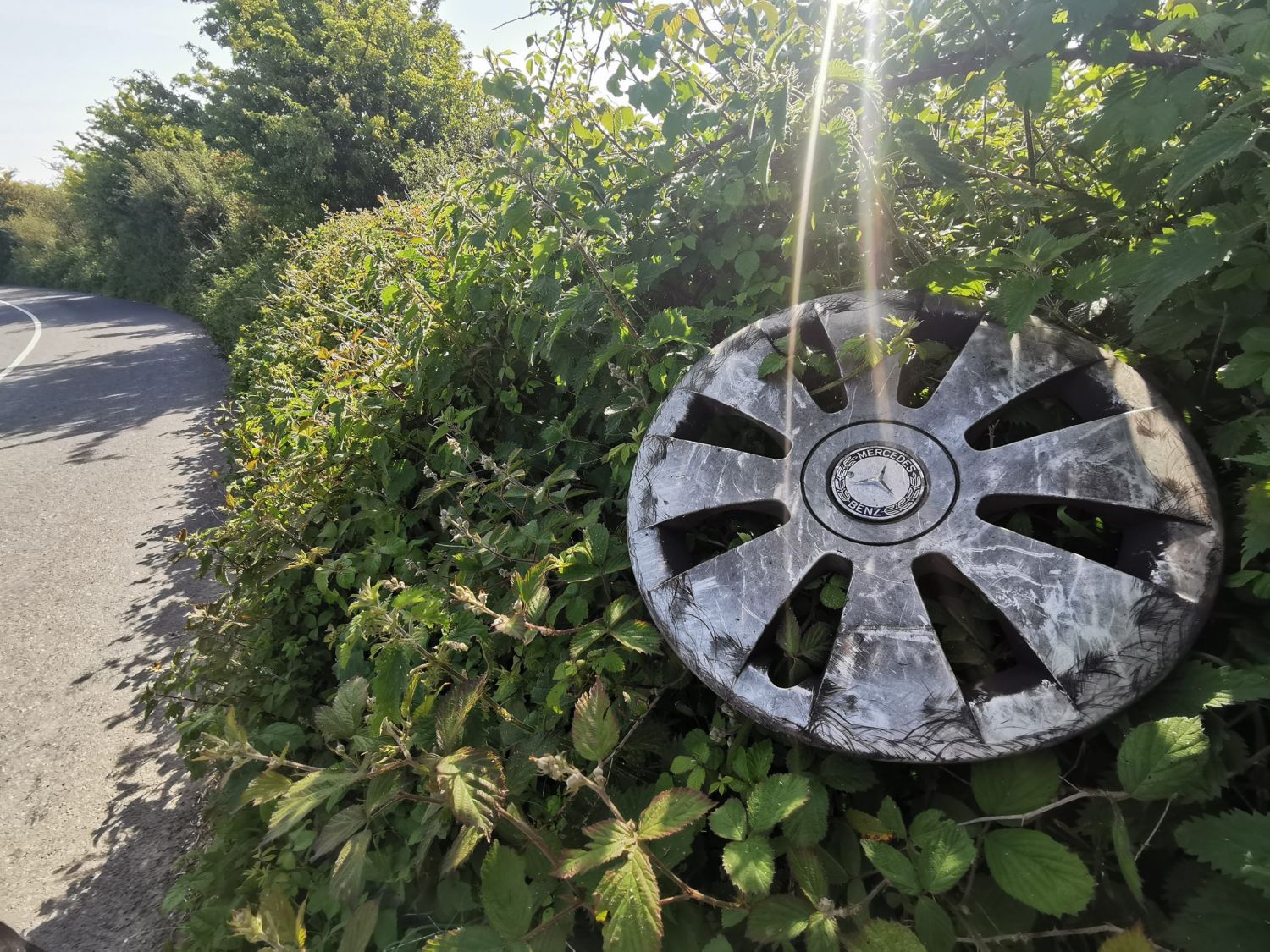 A discarded Mercedes hubcap: a regular sight on my morning walk with the dogs.

Thursday, May 28, 10:05am: It’s a beautiful morning and I’ve got the dogs out for a walk before I head to Waterford Circuit Court to see what’s in the pot. A Mercedes hubcap had been placed on a ditch I walk past pretty much every morning of late while other, newer items of refuse are strewn in sections of the roadside. I recall someone several months ago telling me off online for stating my abhorrence of fly-tipping and illegal dumping. Surely I should reserve my outrage for the headline issues of society – be it political inaction, sexual abuse or other serious crimes was the thrust of what was put to me.

Now it’s worth pointing out that I’ve written about all three, along with illegal dumping and environmental damage over the years. But am I a lesser journalist because I haven’t devoted more time to more pressing social matters than fly-tipping? Maybe I am. Now, it’s worth pointing out that the person who put this to me directly but politely challenged me on my output – and she could be onto something. I can’t deny that. I am annoyed by at least as many issues as I am intrigued by others. Striking a balance in the reporting of all of the above hasn’t served me too badly these past few decades. I may never topple a government through my work but I can sleep easy at night which is a great gift. 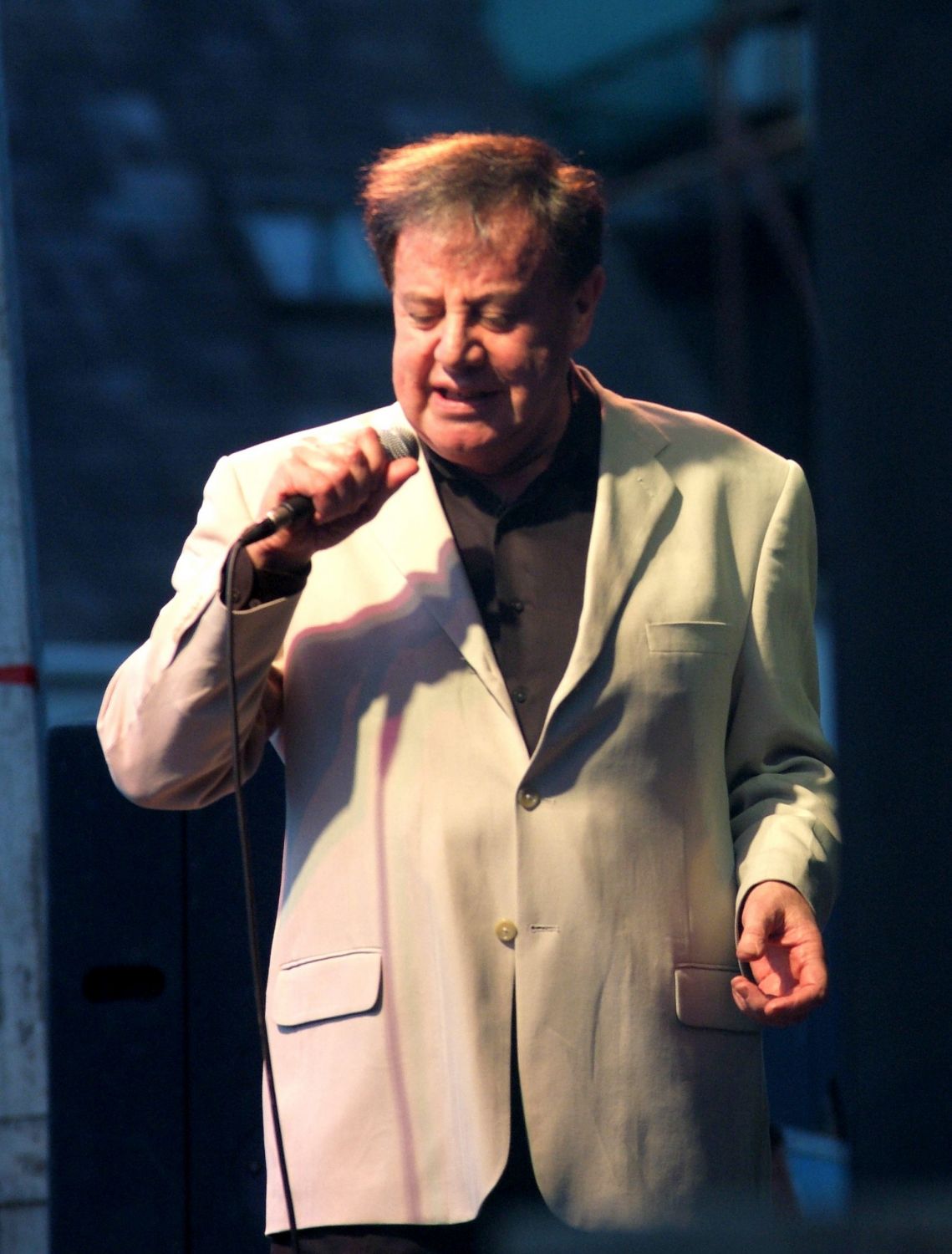 Friday, May 29, 10:38pm: I’ve just filed a piece online after news broke of the death of Waterford entertainment legend Brendan Bowyer at the age of 81. Along with Val Doonican and Gilbert O’Sullivan, Brendan flew the Déise flag on the international music circuit for decades and of that triumvirate, none felt the pull back home to both visit and perform as regularly as Brendan did. There are clips aplenty online of Brendan and both the Royal and Big Eight showbands whom he fronted on both sides of the Atlantic.

From this juncture and given my age, I can’t personally appreciate quite how big both Brendan and the showband scene was, but as someone who has sung, albeit only a little compared to Brendan, I have some idea of just how hard Brendan and his band mates worked, night after night. “I remember in 1957 getting five pounds for a Sunday night whereas I’d work a whole week in the paper mills for four pounds,” said Brendan in an RTE documentary. But by God he worked for it and he kept working for it for almost 60 years thereafter. A great Waterford star has truly gone out. May he rest in peace.

Saturday, May 30, 10:20pm: I complete another anti-social run, clocking almost 11 kilometres in just under an hour on a loop I’d never run before, taking me along the flank of where Ballygunner meets the Barony. It’s a glorious night for a run. As I take the right turn at Callaghane to bring me back towards Knockboy and the Williamstown Road, I go through the gears and up the pace knowing that home beckons, with limbs and lungs feeling great.

I’m thankful for the feeling of physical well-being, which I know has had knock-on benefits for my mindset these past few months. I’ve probably not felt this well since my last full season playing field sport in 2014. I miss competition, I miss the camaraderie of the dressing room and I miss that feeling at the full-time whistle when my team took the day and sucked the fat off a win for days afterwards. Health truly is wealth and we should make the most of it while we have it. I know I’m still playing catch-up on the fitness front but I’m determined to make the most of the next six months both physically and mentally. 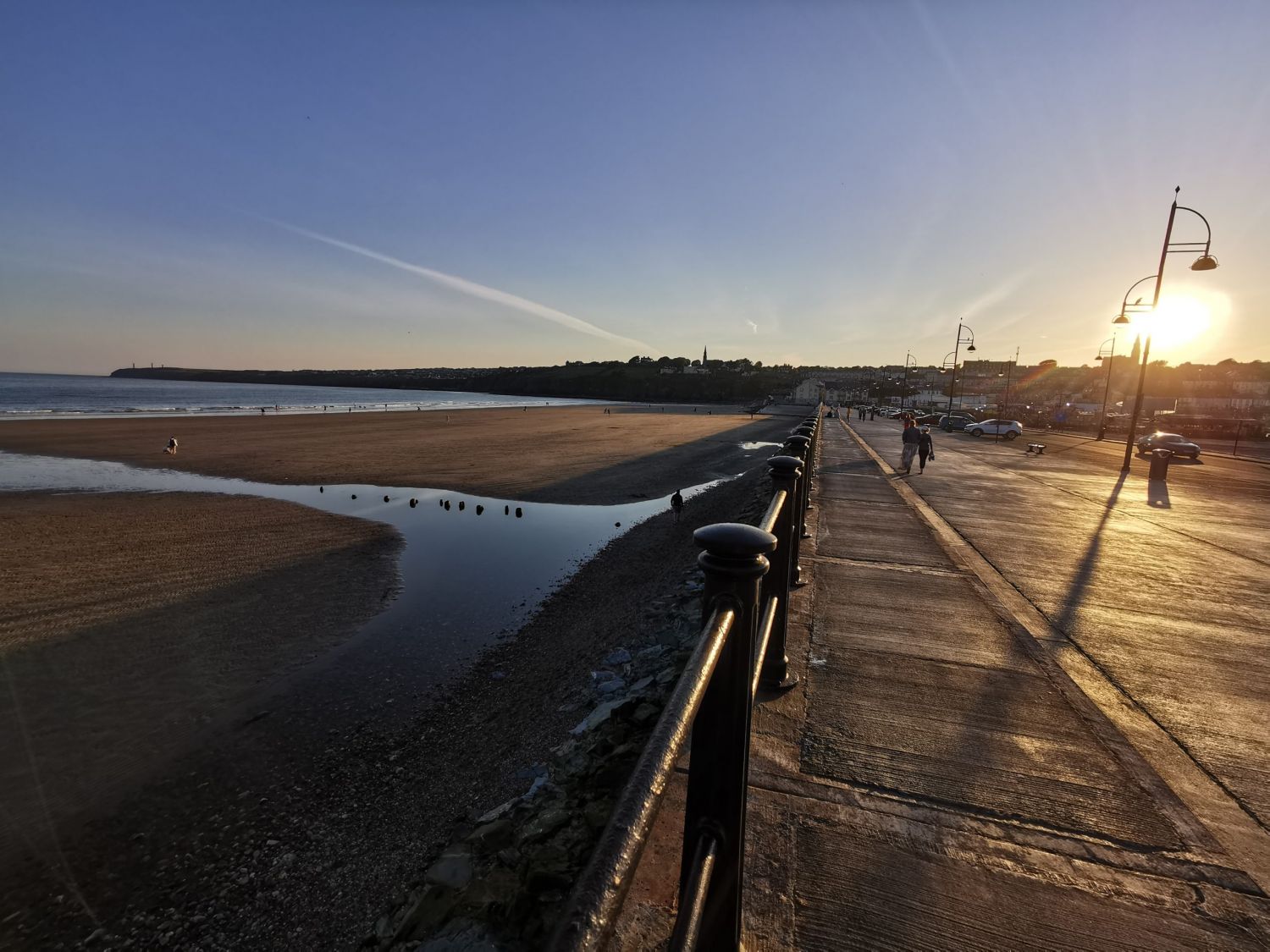 A quiet Sunday evening in Tramore.

Sunday, May 31, 8:43pm: I make a quick stop on Tramore’s Prom to see how quiet the town continues to be. There are a handful of cars parked on the Prom and a tiny fraction of pedestrians one would customarily see along this seafront – and the same applies on the beach itself. We truly have remained incredibly compliant in Waterford over the past 10 to 11 weeks. We’ve clearly stayed together by staying apart, something I’m in a far better position to offer comment on than the community of know-all online curtain twitchers, most of whom have offered no photographic evidence to back up their spurious nonsense. 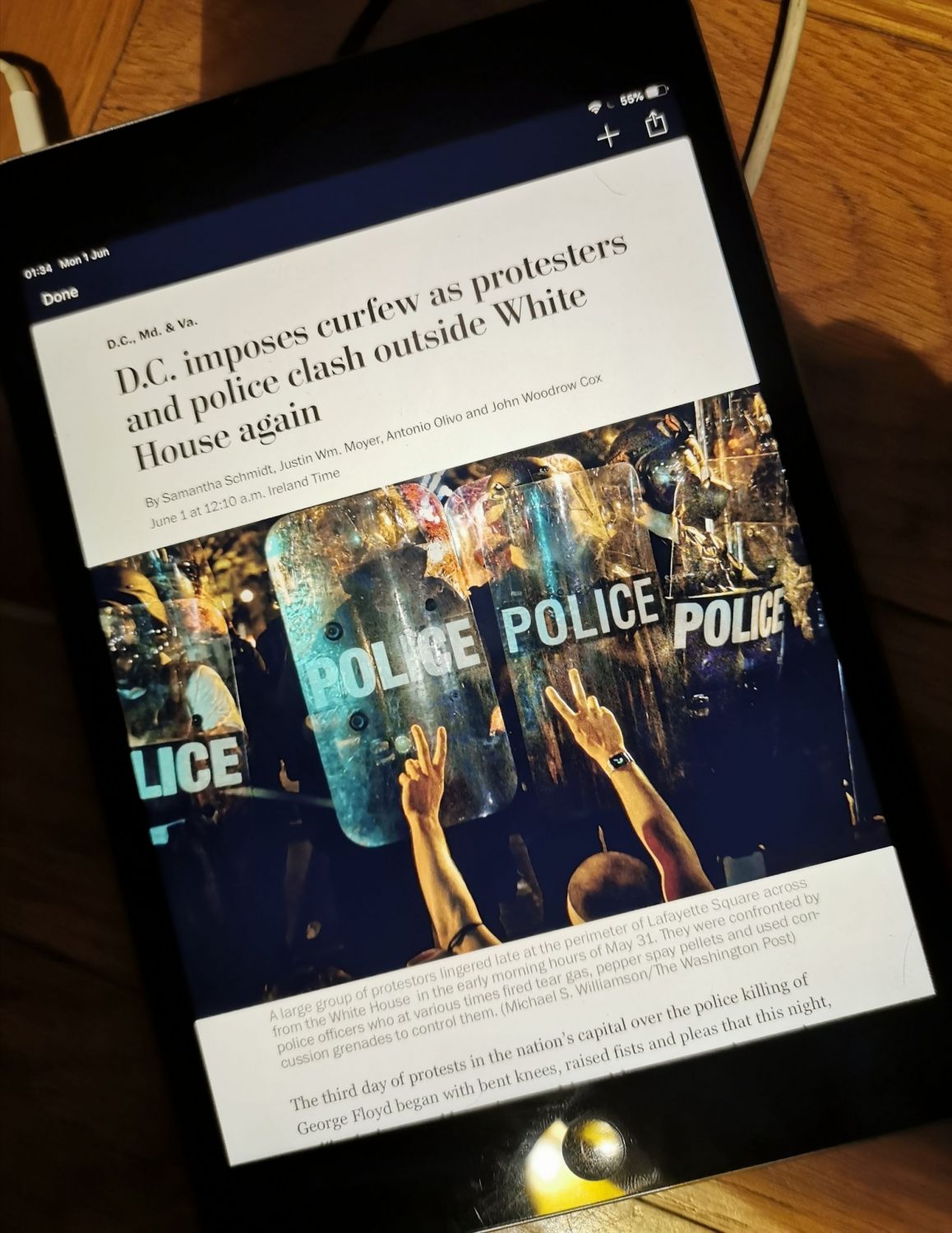 Scanning The Washington Post while burning the midnight oil.

Monday, June 1, 12:22am: I’m topping and tailing a few pieces for deadline day prior to bed when I consult The Washington Post website. I immediately turn to a story headlined ‘Protestors and police clash outside White House again on third day of D.C. demonstrations’.

The piece reads: “In downtown D.C., Georgetown and elsewhere, people spent the afternoon hammering plywood boards outside retail shops and restaurants, hoping their businesses would escape the attacks that others didn’t a day earlier. For some, those images, paired with the racial tension gripping dozens of cities across the country, conjured memories of the riots that ensued in 1968 without Martin Luther King’s assassination. This explosion of anger coincides with a global pandemic that has taken more than 100,000 (American) lives, including at least 4,300 in Virginia, Maryland and D.C. Though many protestors have worn masks, the gatherings seldom allow people to stay six feet apart from each other. On Sunday, as in the days before, any fear of catching or spreading the virus did little to deter the crowds of people who showed up to express their frustration with police brutality.”

It’s hard to believe that someone could win re-election to the White House without any level of reliance on the combined vote of African-Americans, Asian-Americans, Latinos and other ethnicities. The United States is burning in a way it hasn’t since over a decade before my birth yet Donald Trump, conceivably, could still win November’s election. Go figure, as they say on Stateside.