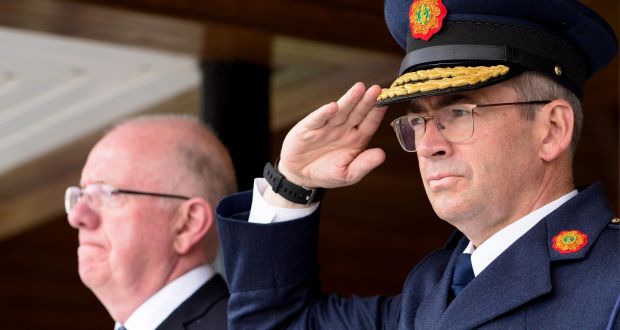 The number of spitting and coughing attacks on Gardaí during the Covid-19 pandemic has thankfully reduced but, as Garda Commissioner Drew Harris stressed this afternoon, such an offence “remains unacceptable in any circumstance”.

“Many individual, families and small groups took advantage of the good weather over the weekend to enjoy the Bank Holiday weekend and avail of physical exercise. Most did so with the best efforts to comply with Public Health guidelines. Unfortunately, we did have to intervene in a number of locations to engage, educate, encourage and ultimately enforce the regulations.”

Between April 8 and May 30, a total of 88 coughing or spitting incidents against Gardaí were recorded nationally, with officers using anti-spit guards on 63 occasions.

Said Commissioner Harris: “The number of spitting and coughing attacks on Gardaí, while simply carrying out their lawful duties, is reducing but remains unacceptable in any circumstance. An Garda Síochána will continue to treat any such incident against a member of An Garda Síochána or any citizen very seriously. The use of Anti-Spit guards has also reduced. An Garda Síochána will only use anti-spit guards as last resort and in line with the Garda Decision Making Model, which includes at its centre human rights and our Code of Ethics.” The use of anti-spit guards will be reviewed by Garda management in September.

In “a small minority of cases across the country” as described by a Garda spokesperson, despite receiving a number of warnings, “some individuals were still not willing to take steps to comply with the public health guidelines”.

Over the Bank Holiday Weekend, Gardaí invoked the public health regulations on six occasions amidst thousands of interactions with the public in both open spaces and at checkpoints.

Between April 8 and May 30, the regulations have been invoked 289 times. Of these, “two were as a result of an instruction from a relevant medical professional”.

Some 61 of these incidents resulted in an at least one arrest (43 under the Public Health regulations), while the remainder was dealt with by recording name and address and then consulting with the Office of the Director of Public Prosecution (DPP).

In all cases where arrests were made under the regulations, Gardaí must consult with the DPP on the decision to charge.

“To date, in 76 of these incidents a charge or summons has issued. Most incidents involve a single individual but some have resulted in charges against multiple people. The remainder are under criminal investigation.”

Pre-existing enforcement powers have been used in 1,878 incidents where other offences were disclosed in the course of Covid-19 operations.

Said a Garda spokesperson: “These range from incidents such as drink driving or disqualified drivers detected at checkpoints, to drugs and weapons seizures, to public order offences. The number of incidents involving other suspected crimes continues to far exceed the number of cases involving only breaches of Government restrictions.”