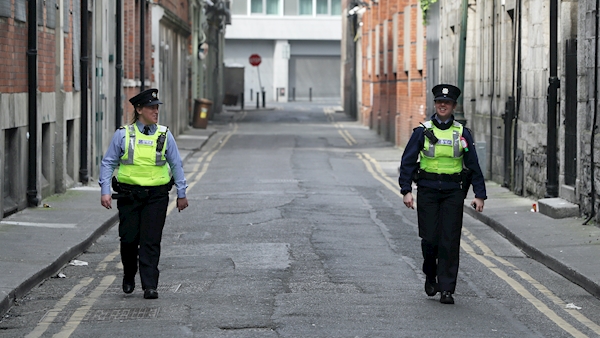 Emergency legislation is being urgently demanded to help gardaí tackle lockdown house parties amid fears they could trigger a new wave of Covid-19 cases.

Residents in Cork’s university precinct have urged the Government to act as they lined streets near University College Cork (UCC) for the third day in a row to highlight their concerns after hundreds of young people attended a spate of house parties in rented property in the area in recent days in breach of public health guidelines.

Health Minister Simon Harris said people should be doing everything possible to protect each other.

“I know the weather has been good, I know we are all missing normal life, but the harder we work now, the easier it will be for Government to make the decision to move to the next phase,” he said.

I have seen the pictures of packed beaches and heard the stories of house parties. We have come too far to throw our progress away.

Justice Minister Charlie Flanagan said personal responsibility is the only thing which will keep the public safe in this pandemic.

“While gardaí will play their part they are relying on the general public to act responsibly,” he said.

In Cork, residents’ spokesperson Catherine Clancy said their ‘reclaim the neighbourhood’ campaign has highlighted an issue affecting many communities nationally.

“Pubs can’t open, restaurants can’t open, we can’t have the Leaving Certificate examinations, yet there are up to 50 people gathering at some of those house parties in our community,” she said, adding that the Government needs to urgently introduce emergency legislation to strengthen Garda powers to deal with such situations, and consider fines for landlords who do nothing to prevent the gatherings.

Residents staged their first vigil on Sunday after a spate of ‘Magaluf or J1-style’ house parties. They accused young people involved of “giving two fingers to the community” and of putting people at risk of contracting Covid-19.

They said those who have moved into the area in recent weeks have no business being there because UCC is closed, and that some involved were using their €350 Covid-19 payments to move into student accommodation for the summer because their foreign travel or holiday plans had been cancelled.

Chief Superintendent Barry McPolin said gardaí have contacted a number of the landlords and that warnings have been relayed to tenants that there will be serious implications for tenancy agreements if gardaí are called to the properties again.

He appealed to the young people involved to behave responsibly.

“They have to respect the rights of their neighbours who are permanently resident in these areas,” he said. “Many are elderly with genuine health concerns.”

Meanwhile, trainee solicitor Sarah McNulty, of Cantillons, said any significant interference with the peaceful enjoyment of your home is a serious matter and those affected can seek a “DIY-style” restraining order against those responsible through the District Court under Section 108 of the Environmental Protection Agency Act 1992.

“If the noise nuisance is coming from a particular house normally let to students, it is probably best to make the complaint against the owner of the house as well,” she said.

The inclusion of a landlord in the court proceedings reminds them of their legal responsibilities to their neighbours and of the possibility of legal liability for compensation and damages if the nuisance is allowed to recur, said Ms McNulty.

Emergency legislation is being urgently demanded to help gardaí tackle lockdown house parties amid fears they could trigger a new wave of Covid-19 cases.