OVER the recent weeks spent primarily at home, the telly certainly has come to the fore and earned its keep in my household. Having only recently joined the ranks of Netflix devotees, I have certainly nothing to complain about in terms of choice and availability of stuff to sit down and watch when the mood takes me. That said, two programmes in particular have caught my attention, neither may I say viewed on Netflix.

The first struck me as very interesting indeed at the outset and appealed to my love of good historical documentaries. “Lost Relics of the Knights Templar,” revolves around two guys who claim to have in their possession rare artefacts believed to be part of the famed Knights Templar hoard. Hamilton White and Carl Cookson, both avid collectors of all kinds of items, believe the find could alter history concerning the legendary order of the Templar’s and our perception of them. The Templar’s were set up originally to protect Christians on pilgrimage to the Holy Land. Indeed, the Knights even arrived in Ireland at one point and had holdings across the country, including Kilbarry in Waterford (hence the local name Templar’s Hall).

‘The earnestness of the crew is beyond question and I assume they are sincere but to me, it beggars belief that they can squeeze a show out of seven years of finding absolutely nothing!’

That the pieces discovered by our treasure hunters were enormously rare is not in question, nor their obvious passion for seeking out such historic booty. However, this particular documentary took us from Billy to Jack, pillar to post, covered any number of countries on a merry chase which still, at the end of several weeks, left us with as many questions as answers. Was it really a chalice used in this type of ceremony or that one? Did the Templar’s bring their haul out through tunnels to Portugal from the Holy Land or maybe it was sneaked over to Scotland?

It was wonderfully dramatic, all kinds of theories were offered as to what the items were used for, but I felt a lot of it was at best speculative. Was the vessel actually used in certain ceremonies? Did the sword really belong to the last grandmaster of the Templar’s? They couldn’t quite declare anything much really with any degree of certainty. Templar history expert Dan Jones joined them at intervals and while marveling at the very fact the two lads had even gotten their mitts on this haul to begin with, couldn’t verify that this was bona fide Templar stuff, used for the specific practices or rituals explored on their mission. It might have been, but then again it might not.

To be honest, all that didn’t bother me so much as the fact that this show ran for a number of episodes, when it could have been effectively covered quite comprehensibly in a one-hour long programme, two at the most. You assumed at the start that the length of the series might indicate some sort of certain outcome. There wasn’t any. No doubt, our heroes Hamilton and Carl were having a ball gadding around the globe and garnering a degree of notoriety into the bargain. I sort of envied them actually. Who wouldn’t fancy a bit of globetrotting making such a series? The sports cars used by the lads were impressive too. Worth a look? Absolutely. Doubtless there’ll be repeats. I’m sure you’ll enjoy their adventures, but did it have to be padded out so much though? 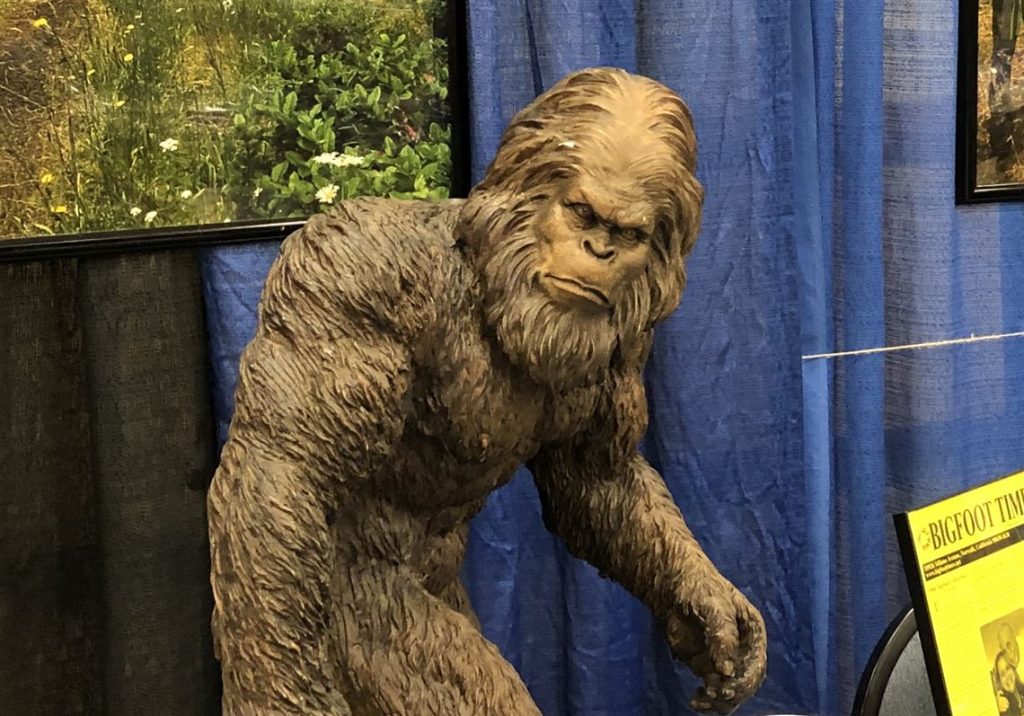 A model of Bigfoot

Another show I looked at with mild curiosity and a huge dollop of glee and scepticism was “Finding Bigfoot” on one of the documentary channels. In fairness, it should have been called, “Not Finding Bigfoot”. Most of us of a certain vintage are, I’m sure, aware of the stories of sightings of a giant, hairy creature referred to usually as Sasquatch or Bigfoot. He popped up in an amusing TV advert recently.

The show first aired in 2011 and wrapped up in 2018 but they repeat it hence I was able to grab a look. Basically, cameras follow four researchers on an intrepid search for this legendary creature and investigating supposed sightings and any evidence that might shed light on old Bigfoot and his goings on in wilderness regions of the USA and Canada, apparently his stomping ground. The earnestness of the crew is beyond question and I assume they are sincere but to me, it beggars belief that they can squeeze a show out of seven years of finding absolutely nothing!

They have not found our furry friend, in fact they have only “eye witness” accounts of folk who saw ‘something’ in their backyard or over a ditch or in the distance in a heavily wooded forest. That these people are genuine is debatable, but even if they are, I can’t help but feel that as viewers, we have been royally duped and led up the garden path in the name of ‘entertainment’.

According to what I’ve been able to find out about the investigators on the show, even Bigfoot ‘believers’ weren’t impressed and have slated the show, clearly appalled they’ve been made look silly by this lot’s stunning lack of success in turning up anything. Enthusiasts also believe that any footage of a Bigfoot would be reported long before an episode airs making the show redundant anyway. If you can’t please the ‘Squatch’ lovers, you’re on a sticky wicket surely. Amazingly, I hear the show was given two further spin offs and yes, you’ve guessed it, they’ve still found zip.

My theory is if the aforementioned big guy is really out there, he doesn’t want to be bothered with us so best leave him or her or it be. I suspect some hoaxers are having a right laugh and eventually, like the crop circle dudes, they’ll admit their tomfoolery or be outed by a buddy.

Like our Templar hunters, I still found the show interesting although I treated this one as more of a comedy and found myself giggling at it regularly.

On a closer look at the schedules on these channels there seems to be a lot of shows entitled, “Finding this or that” or words to that effect. In most cases they never find anything. Whether you want to have a gander at these yourself is your business but just be prepared to be taken on a bit of a wild goose chase. Lockdown restrictions are easing, viewership for these types of programmes might well follow suit. I’ve definitely seen enough. If Bigfoot is found, possibly living with Elvis, I’m sure it’ll be on the Six One News.