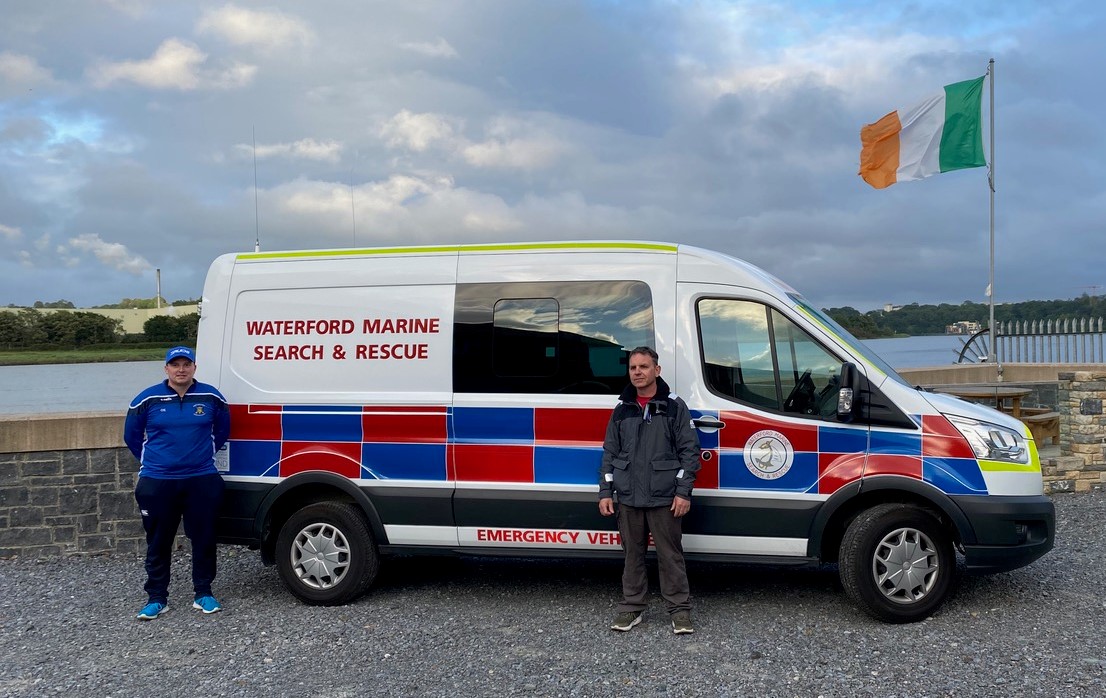 Mount Sion’s Owen Sauvage and Mark Power of the Waterford Marine Search & Rescue at the launch of the Ball2Wall Fundraiser.

Did you ever catch up a hurley and puck a sliothar and off a wall with it? It’s a great feeling. Especially after a long hard day or especially during these strange times. A great release.
For a second though, try and get your head around 250,000 balls being hit off various walls, not only in Waterford but all over the world.

WONDERFUL CAUSE
That’s the idea behind Mount Sion GAA Club’s Ball 2 Wall Fundraiser which is due to take place over three days on the weekend of June 26 to 28. So how did it come about and how will it work? Club PRO and one of the organisers of the event, Ciaran Sheridan, explains.
“During lockdown we were seeing lots of sports people and clubs doing great things for different charities and we decided that we’d love to do something to try and raise much needed funds for a local charity. Our former club chairman, Peter Walsh’s wife, Sharon is very involved with the Waterford Marine Search and Rescue so we decided that they were a brilliantly deserving cause to try and help out. What these guys do is amazing. Our pastime is to go to matches and help out with a bit of training but these volunteers spend four to five hours every Saturday night on suicide patrol up and down the quays and help pull people out of the river, that’s a whole different level. When we went down to see the those involved and listen to what they do, we were blown away.”
“So over 72 hours our goal is for our club members past and present to hit 250,000 balls of walls all over Waterford and actually all over the world, wherever former Mount Sion players are now living. The buy in has been great with the likes of Nicolas Mackey, Jamie O’Meara and Iggy O’Regan putting in huge work on the logistics and how it will all work.” 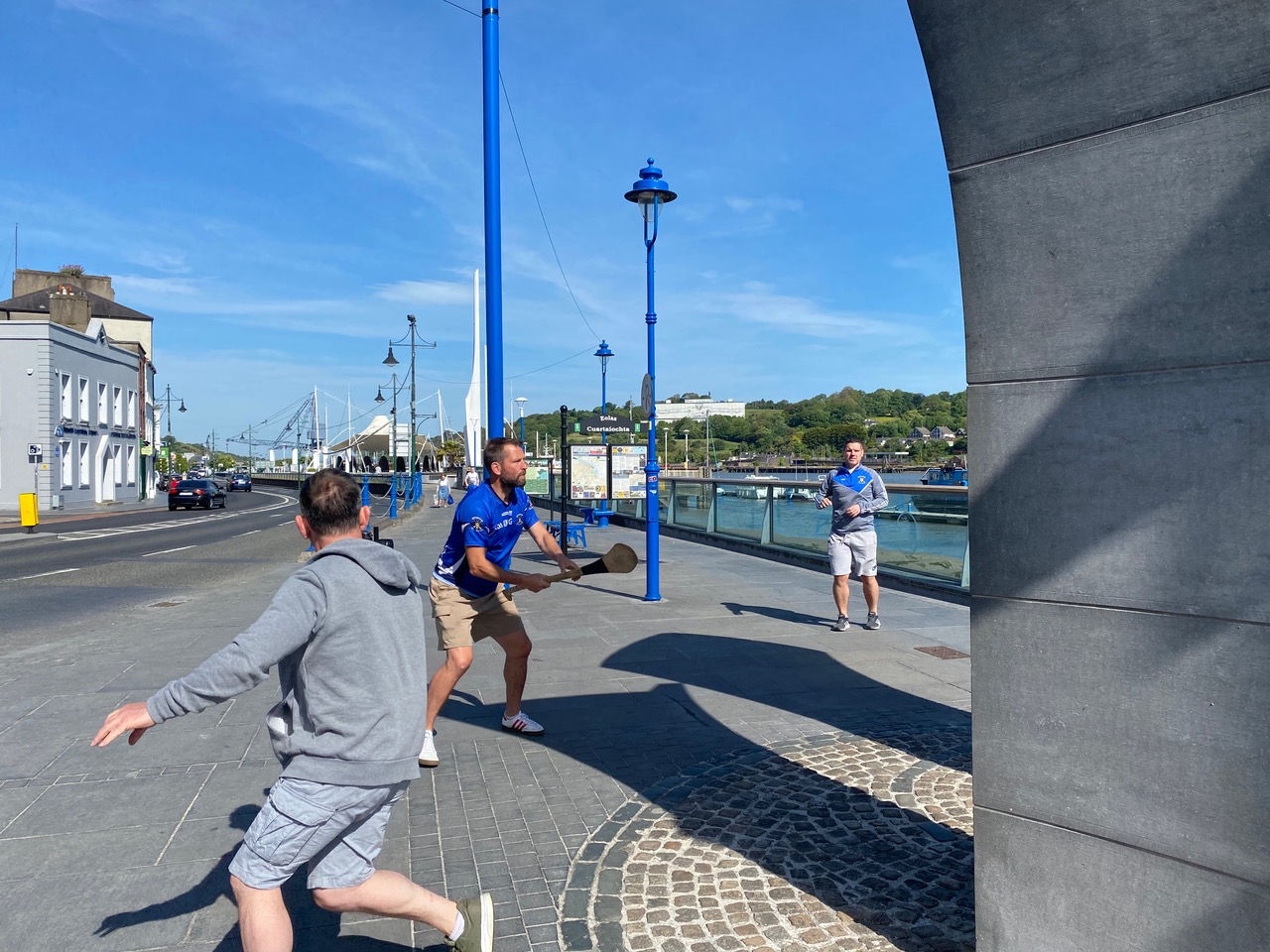 Ken McGrath, Mark Power and Jamie O’Meara during the shooting of the video for the Ball2Wall Fundraiser.

BRILLIANT VIDEO
To go along with the launch, the club put together a brilliant video which you can see on the club’s Facebook page. “Mark Power of Waterford Epic Locations, who is also a volunteer with the Waterford Marine Search and Rescue put it together and we’re thrilled with it. I think it’s a great advert for our city. We really wanted to bring the river into it as the river is a part of our club and a part of all of us and we really wanted to raise awareness as well as money for the amazing work that these guys do.”
With less than two weeks to go the momentum is really building to what promises to be a great event. “Yeah it’s all systems go. All the club’s players, young and not so young, have really missed hurling during the lockdown and it’s great to get them involved in the club again and give them something to look forward to and we’re all looking forward to it, it should be a great event and hopefully we’ll raise lots of money for a great cause.
“The overall objective of the Waterford Marine Search and Rescue unit is to provide and organise Search and Rescue on lakes, rivers and tributaries in Waterford City and County 24 hours a day, 365 days of the year. To advance through training and education, the level of skill necessary to carry out Search and Rescue operations and to co-ordinate with other rescue organizations. And reduce the loss of live.”
The link to donate can be found on the Ball 2 Wall Fundraiser Facebook page or the Mount Sion GAA Facebook page. Best of luck to all involved.

Coming on June 26th to 28th, we are proud to bring you the Ball2Wall fundraiser in aid of Waterford Marine Search and Rescue, check out the video with some familiar faces and locations! 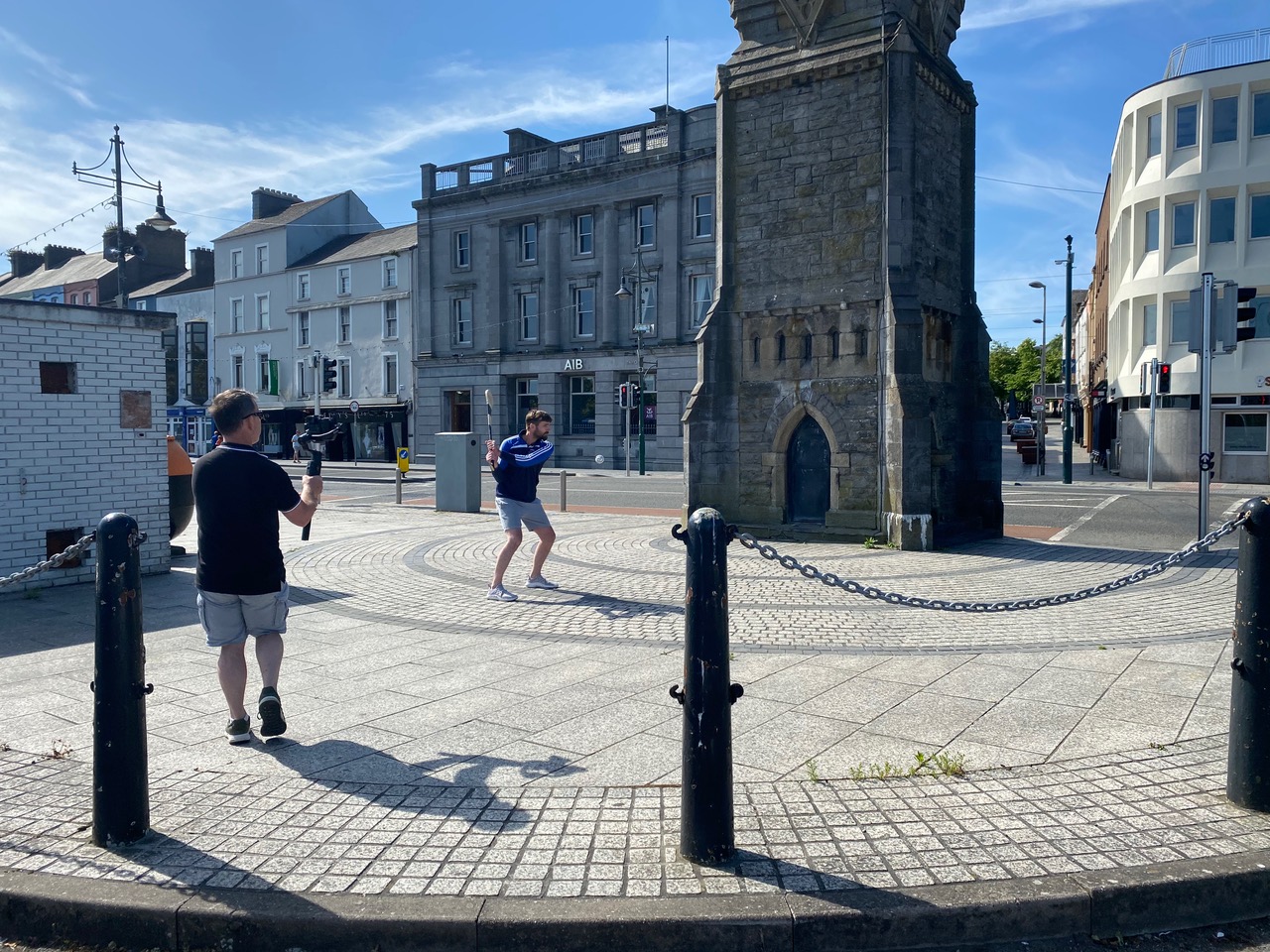 Tony Browne and Mark Power at the Clock Tower during the shooting of the Ball2Wall video.