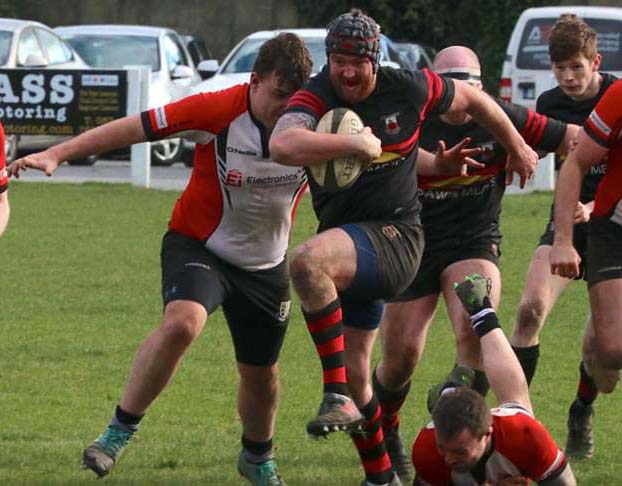 Scott Hornibrook on the rampage against St Senans in a recent Munster Junior League game. Waterpark’s supporters have really come up trumps during this Pandemic.

All sports clubs in Waterford and beyond have been hurt by the Covid-19 crisis and many financially hit too but one Waterford club has come up with a hugely successful way of hitting back.
Ballinakill based Waterpark RFC is one of Munster’s most famous rugby clubs and the closure of its grounds and bar have hit the club badly over recent months. Secretary Lauren Traynor explains.
“March to July is the period where we make the vast majority of our income which keeps us going for the year. The end of season finals bring big numbers to our club grounds and on top of that we had a big touring party booked in to come from Warrington for the Easter weekend. They were booked into the Tower Hotel for three nights and we expected to make a lot of money from that weekend through the bar, sale of food and gear and because we knew that was coming up we didn’t undertake any big fundraiser like the Cube or others that we have done over recent years. We also missed out on confirmations and communions.
“We also run a corporate tag tournament every year from May to the end of July and that’s always a big source of income for us so we wondering what we could do to try and make up for these losses and put some money back in the coffers as we still have plenty of expenses to cover, like electricity, insurance and so on. Our chairperson, Fiona Kenneally came up with the idea of setting up a Go Fund Me page and it has been a great success. Local businesses and supporters have always been great to us but with this we wanted to cast the net a bit wider to friends and supporters overseas and we’ve been overwhelmed with the response. We’ve got donations from all over the world, including one from a lad in Japan who played for us many years ago. But there’s also been kids giving fivers and tenners out of their pocket money and it’s all been great and we’d like to thank everyone who has donated.”
As Lauren eludes to the response has taken them completely by surprise. Inside the first five days of the page going live it had brought in just short of €9,000 which is amazing and shows the high regard in which the club is held.
This is the post that Fiona Kenneally put up on the club’s Facebook page to accompany the link to the Go Fund Me page.

WATERPARK MEMORIES
‘To All Our Past Players, Tourists and Friends
Remember the good old days…
Training nights in the depths of winter!
Winning (or losing) Munster leagues and cups at under age Junior or senior level…
The Local Derbies against City or Carrick!
The AIL successes of 1994 or 2002..
On the other hand maybe your memories are of great nights Discos in the Haven Hotel or Stephens Night in Ballinakill or Parkies Discos!
The great tours to England, Wales or France?
Are you one of the many rugby players from Auz, NZ, Eng, Wales and France who stopped off in Waterpark for a season and stayed longer than you ever imagined.
Regardless of the memory the club has played some role in you and your family’s sporting and social lives and you remain a part of Waterpark RFC. We are reaching out to ALL our old friends to help us ensure we create the same opportunities and memories for the next generation at Waterpark RFC.’
Here’s the link to donate or check it out on the club’s Facebook page: gofundme.com/keep-our-club-going-for-our-039return-to-the-pitch039.

RETURN TO PLAY
The IRFU have this week issued their latest ‘Return To Rugby Guidelines For Clubs’ and it’s good news for local clubs, like Waterpark, Dungarvan, Carrick and Waterford City.
“September has been given as the month in which rugby matches will be permitted to return for clubs. Given the changing nature of the reopening of society and the recovery from the COVID-19 pandemic, a specific date will not be issued until further clarity is available and will remain subject to change.
“The given date will also factor in a minimum window of five weeks permitted for contact training ahead of a return to rugby matches. The Competition Stage is the final stage in the summary roadmap of the IRFU Return To Rugby Guidelines. All clubs are currently in the COVID-19 Safety Planning Stage, which they must complete before moving to the resumption of training at any level.
“The IRFU are working toward a modified season for 2020/21. The governing body recognises concerns over travel, safety and expense and this will be reflected in the season’s structure. Clubs should expect that games at the start of the season will be kept local where practicable. Further detail on the structure of the season will also be issued in due course,” said the IRFU statement. Good news indeed.