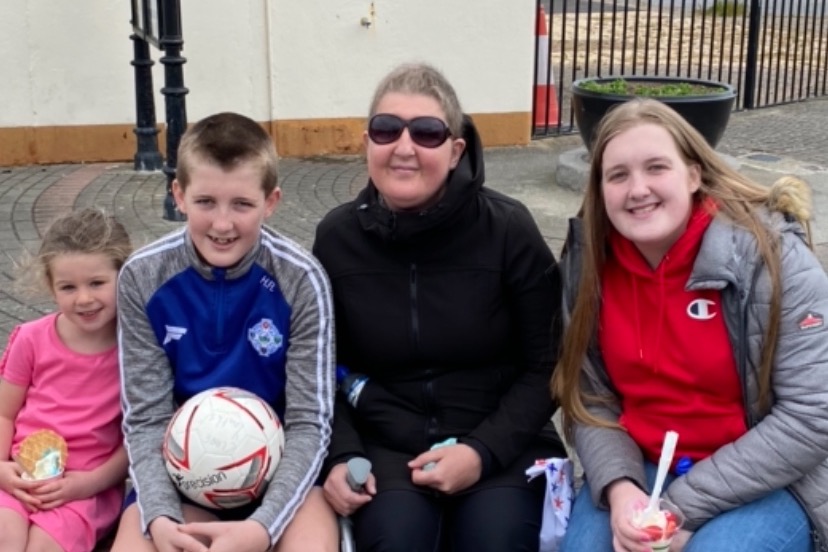 THE family of Tramore woman, Trina Ryan (40), who was diagnosed with Stage 4 metastatic breast cancer last October, just two months after her birthday, have appealed to people to be aware of any changes in their body. Trina’s diagnosis revealed that at the time of diagnosis, the cancer had spread from her breast to her bones and liver.
Trina’s sister, Mary, together with Trina’s family hopes to raise awareness for metastatic breast cancer, and particularly to raise awareness that, as in Trina’s case, there is not always a tell-tale lump when cancer is present.
In the early stages of cancer, tumors are typically too small to be seen or even felt. As the cancer progresses, a visible mass may not always develop, meaning many women, like Trina can experience the silent development of cancer.
Before Trina was diagnosed last year, she began to experience excessive tiredness, she lost a significant amount of weight and her appetite was greatly reduced. She dismissed the gradual onset of a limp and a pain in her leg, which she thought to be sciatica. This pain was actually caused by the spread of the now Stage 4 cancer to her bones.
Understandably devastated by the news, Trina’s family have rallied around her to offer support to her three children, Amy (15), Harry (13), and Maisie (4).
The decision to organise a fundraising initiative was based on Trina’s character, vivacious, friendly, and kind to a fault, with a word for everyone she passed. Her sister Mary said, “Trina would never let someone go without and she is renowned for helping those in the community so we want to give back to her. Our aim is to give Trina a good quality of life and to make memories with her beautiful children.”
The dual obstacles of distancing during the pandemic, and being hospitalised following her diagnosis mean that the emphasis is on spending every moment making memories with her family. A schoolfriend of Trina’s extended her wishes for “an abundance of time” for the mother of three.
At present, the fundraiser which is being run on the popular site, GoFundMe has reached in excess of €61,000 today, June 24. Locals and beyond have been donating hourly, leaving messages of goodwill for Trina and her family. Urged by many to “keep fighting”, Tramore is mentioned as being a darker place without Trina’s bright smile on the main street.
Trina’s family spoke to the Waterford News & Star to sincerely thank those who have taken the time to donate and to send words of kindness and strength to Trina and her family. Mary Ryan said the family are absolutely blown away by the generosity of those who have helped her sister in any way.
Trina is fighting, that much is certain, and she is undergoing weekly chemotherapy at present. With metastatic cancer, however, the liver presents a concern and the family are investigating trials in America which are possible for when the time comes, but at a high financial cost.
Donations can be made on https://www.gofundme.com/f/trina-ryan-stage-4-diagnosis