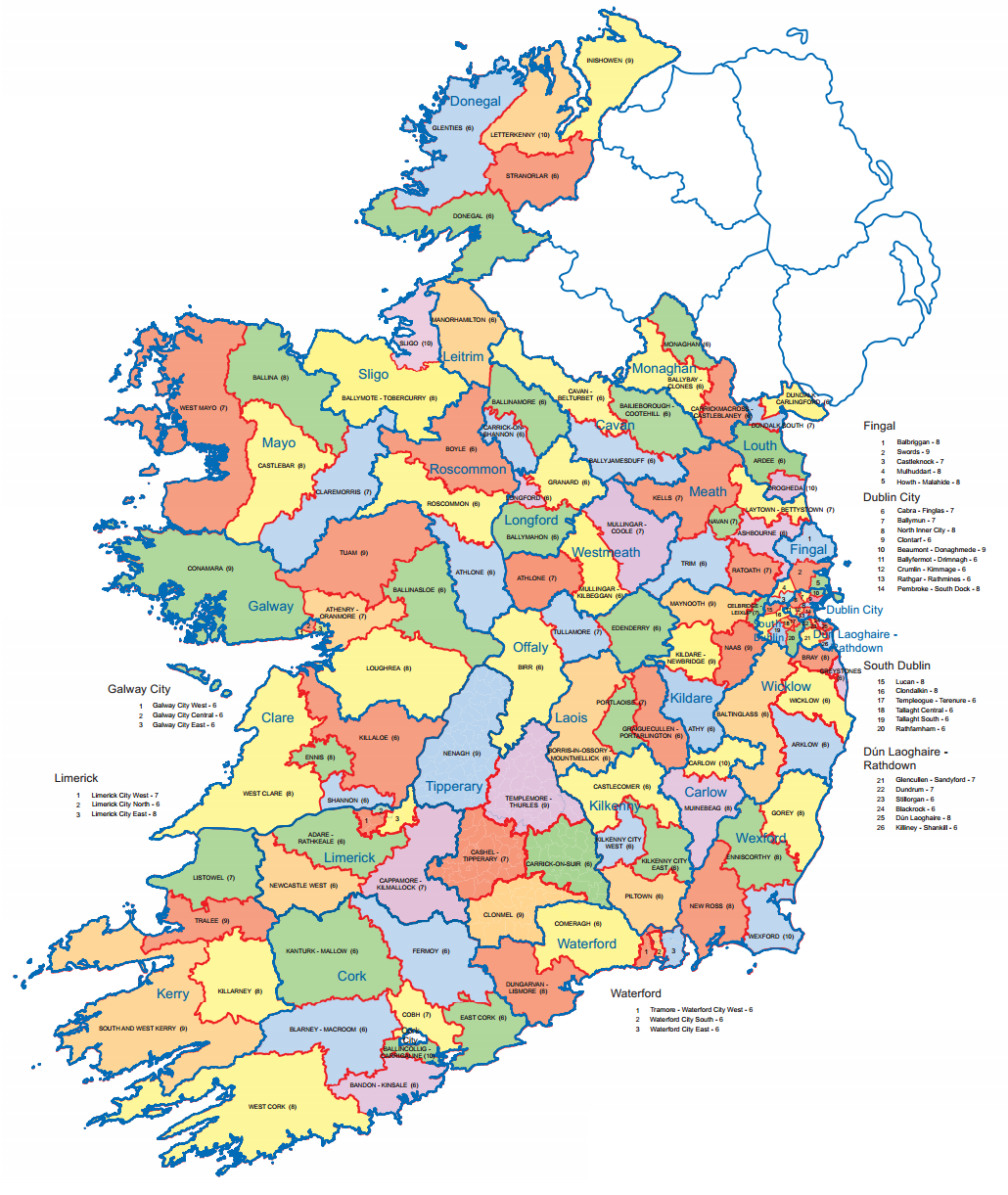 The State’s Municipal Districts, which came into being back in 2014.

Municipal Districts are “a welcome development and are becoming an important part of the planning and delivery of services at the local level” according to a new report published by the Institute of Public Administration (IPA).

In the report, titled ‘Municipal Districts: A Review’, Waterford City & County Council is among 12 local authorities contacted by its authors to facilitate “an in-depth look at the operation of municipal districts”. Interviews with senior managers within the Council were conducted while interviews/focus groups were held “with personnel involved in the oversight and operation” of such districts.

In relation to the holding of meetings, the report established that “the vast majority of municipal districts (79 per cent) meet monthly. Nineteen per cent meet every two months, with two per cent meeting at other intervals.” The 2016 local authority executive survey indicated an attendance rate of 96 per cent at municipal meetings, with meetings generally running to between two and three hours in duration.

The report notes: “In many of the more rural counties it is common to have meetings during the day, which means that some elected members need to take time off work. In some of the cities and where commuting levels and distances are high, evening meetings are more common. Waterford metropolitan district meetings, for example, are in the evening time, at 5pm (while the other two municipal districts in Waterford hold their meetings during the day).”

The benefit of workshops

Workshops in Waterford have to date been held for an extensive range of issues, “including for example, the review of the county development plan and local area plans. There are a minimum of three to four per year. They are usually held immediately before municipal district meetings (and could take an hour or hour and a half). One perceived benefit raised by both elected members and the executive is that these meetings can be used to discuss sensitive matters, for example, where the executive might want to brief members on a particularly sensitive issue, or members have asked for a briefing. The meetings are seen as facilitating preliminary deliberation on an issue which is decided on at the subsequent public municipal district meeting.”

The report also notes that the Comeragh Municipal Area does “not have an appropriate meeting space”, hence their staging at County Hall in Dungarvan.

The Metropolitan Area Strategic Plans (MASPs), developed for the five cities and their wider metropolitan areas as part of the Regional Economic and Spatial Strategy (RESS) has yet to be fully realised or implemented between Waterford’s ‘Metro’ Area and the Piltown Municipal District, encompassing most of Ferrybank.

While joint meetings have been held between the Metropolitan and Piltown Districts to discuss matters of joint interest and concern, the push for more regular meetings between these Councils has primarily come from South Kilkenny Councillors.

Waterford and Kilkenny Councils are taking their respective leads from Wexford County Council regarding the delivery of the 22-kilometre Greenway from New Ross to the North Quays. One would expect a meeting of all three bodies to be held to discuss the delivery and completion of the €12 million project in due course.

Feedback from Directors of Service

The presentation of reports from each of the Council’s Directorate departments (primarily Roads, Planning, Environment, Housing and Economic Development) at each meeting, followed by a question and answers session, was raised by the report.

“There is limited time for questions and answers (especially in the metropolitan district due to the larger number of elected members). Members do not really use the notice of motions system, due to the provision of reports and the ability to raise questions and get answers on these. One issue raised in interviews was that the demarcation between municipal district and plenary council is not always clear with regard to members putting forward motions that are more appropriate for municipal district level to the plenary session and vice versa. In dealing with such situations, the role of the Corporate Policy Group is seen as particularly important in establishing good practice, as is the strength of the Cathaoirleach.”

The lack of financial muscle within the municipal district system is unavoidably referenced in the report, as is the regular “tension” that arises between differing party-political interests when it comes to the annual General Municipal Allocation (GMA).

“For most local authorities, GMA is less than 1 per cent of the overall budget. In a small number  of local authorities, principally those where increases in the Local Property Tax are allocated to the GMA, the proportion is somewhat greater. Other discretionary funding sources are available in some local authorities that give municipal districts direct control over more than just the GMA. Nevertheless, the overall totals remain small in relation to total expenditure…The transparency of what is or is not included in the GMA, and what other sources of discretionary funding are available to municipal districts through the draft budgetary plan, could be improved in many cases.”

The report concludes that municipal districts have proven “a welcome development” since their introduction in 2014 “and are becoming an important part of the planning and delivery of services at the local level”.

Should further functions be devolved to municipal level, such districts “have the potential to be a significant driver of co-ordinated town, village and rural development, and enhanced community engagement. The extent to which that potential is fulfilled depends on the willingness of all involved to develop a clear vision of local governance below the level of the county”. 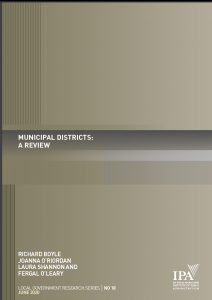 The IPA’s report into the Municipal District system was published this morning.