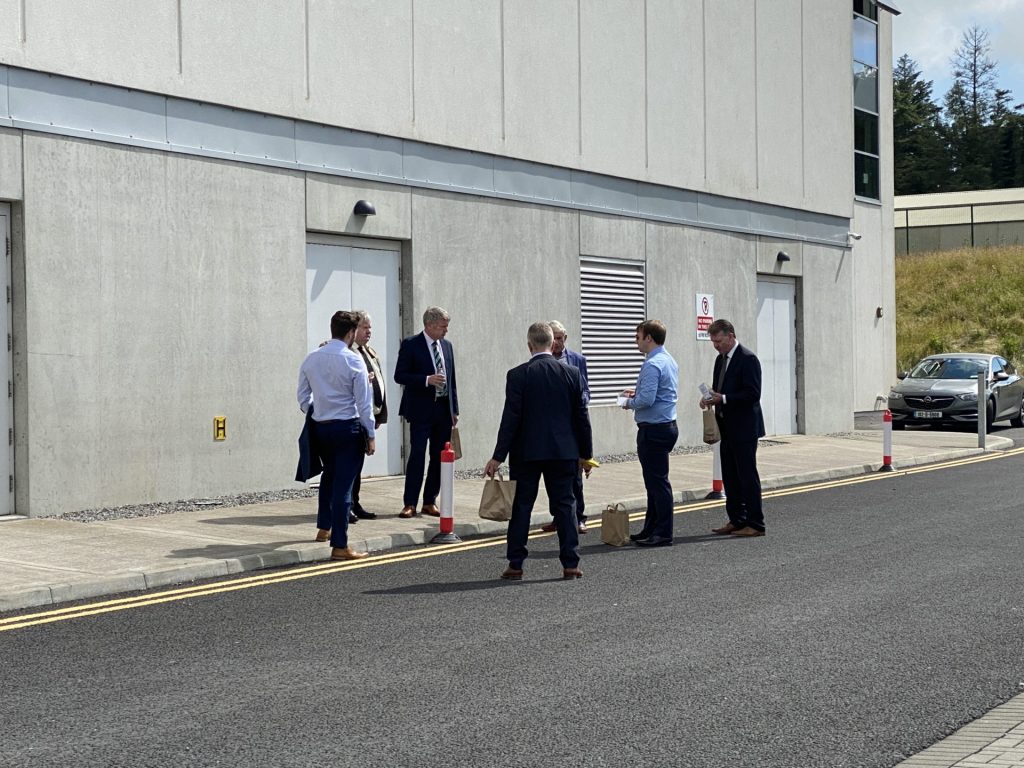 “Where were you?” – Fianna Fail members hold a post mortem as to how it all went wrong in the first vote of their new pact.

IT may not have been a fall but the new council pact of Fine Gael, Fianna Fail and the three independents Seamus O’Donnell, Joe Conway and Joe Kelly, made a right mess of their first hurdle at Thursday’s Plenary meeting (June 24). The position of chairperson of the Planning Strategic Policy Committee (SPC) was up for grabs and would be the first exercise of the new voting pact.

As decided in the pact agreement, Tom Cronin from Fianna Fail was to be put forward for the position and if every member of the new pact showed up, he would win the vote by 15 to 17.

As it turned out, that was a bigger ‘if’ than any of them expected. The vote was the seventh item on the agenda, but somehow ended up being the second, around 15 minutes after the meeting started when Fianna Fail Councillors Eddie Mulligan and Adam Wyse still hadn’t arrived at the meeting.

As the roll call commenced, the nomination of the opposing pact (made up of The Green Party, Sinn Fein, Labour Party and independent councillors Mary Roche, Davy Daniels and Donal Barry), Labour’s Thomas Phelan couldn’t believe his luck as the €6k a year position (worth €24k over the remaining 4 years of the council) was about to fall into his lap.

Fianna Fail faces looked around in dismay and one Damien Geoghegan had caused to be worried too because if the missing councillors didn’t turn up by the Annual General Meeting two hours later, the more lucrative position of Mayor would have also slipped through their hands. Thankfully for Mayor Geoghegan, the two councillors slipped into the meeting just in time.

Instead of being 17-15, the vote ended up being 15 a piece with the deciding vote going to the Mayor, Labour’s John Pratt, who was obviously going to vote for Cllr Phelan.

The Waterford News & Star contacted the councillors in question to find out why they missed the pact’s first test.

“I had informed the Fianna Fail whip that I wouldn’t be at the Plenary Meeting and was not told to be there,” Cllr Wyse said. “I was to be at the AGM but in the end I was actually present for over 75% of the agenda of the plenary. The former mayor was informed by another Councillor to move the agenda around so they could take the vote before I arrived. That’s politics though. My aim is to attend all meetings but with other full time work commitments it can prove difficult at times. If agendas are changed on a whim like that, I would question why we are having CPG meetings at all where all parties agree a running order for the meetings.”’

“As a result of my Reserve Defence Force commitments supporting HSE in the fight against COVID19, I had informed our Corporate Policy Group Representative that early meetings would not suit me,” Cllr Mulligan said. “As a councillor who is diligent about full Council Meeting attendance, I was dismayed to be notified that the July Plenary Meeting was at the unusual time of 2pm. I had booked a day off for 24th but as the Operation was finishing on the same date, I was required in Cork at short notice. Reviewing the Agenda, I was happy that I would be in attendance by Item seven, which was after the Management Report. When I arrived, the Management Report hadn’t even commenced and I would have been present for the vote, if the Agenda schedule was followed. In my opinion, there’s no point in the CPG formulating agendas and running orders if they are to be disregarded on a political numbers whim, at a meeting.’

Cllr Tom Cronin was also approached for comment but none was received at the time of publication.