“The tears just started flowing and they wouldn’t stop!” 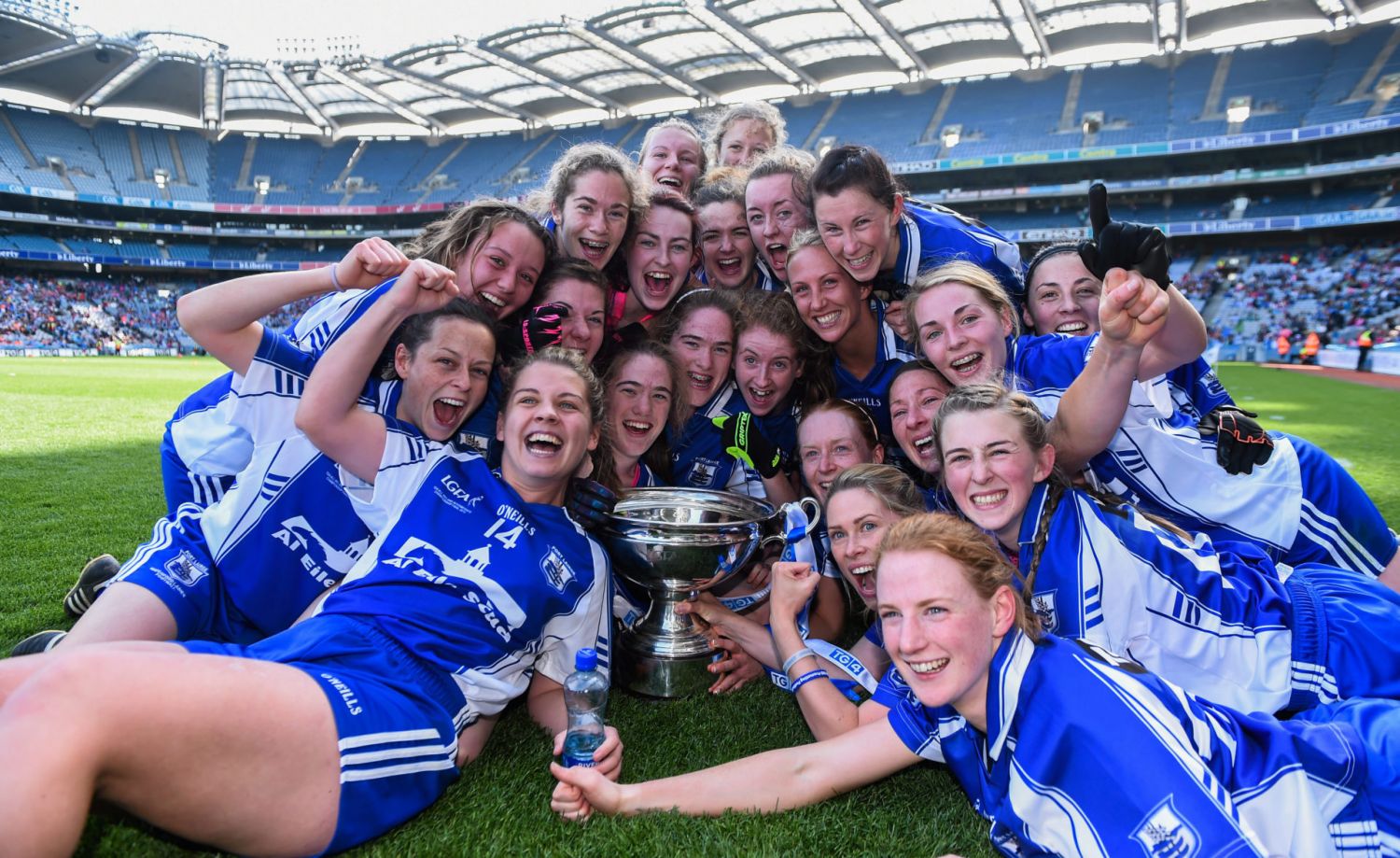 The Waterford team celebrates with the Mary Quinn Memorial Cup after the game after their 2015 TG4 Ladies Football All-Ireland Intermediate Final win over Kildare. Photos: Inpho/Sportsfile.

Long serving Waterford and Ballymacarbry defender Linda Wall burst into tears when she raised the Mary Quinn Cup at the top of the Hogan Stand steps in 2015.
“We’d been at it so long, it was our third time reaching Croke Park and we were beginning to think ‘will we ever win it?’ We were relegated seven years previous and it was so hard to get back up senior. It was just a big relief on the day. I’m probably extra emotional anyway! The tears just started flowing and they wouldn’t stop! I’m sure I cried the whole time I was up there. At least they were happy tears, not sad ones.”

A FAMILY AFFAIR
She wasn’t the only emotional member of the Wall family. “Dad was in the stand and he was nearly upset and you’d never see that! It was brilliant because my parents followed us all over the country and how many times we fell at the quarter final or semi final hurdles and they were at those games so it was a great reward for all the supporters.”
It was a family affair as her sisters Mairéad and Aileen also started that final against Kildare. All the Walls were reunited at the end. “Seeing our families, my mother and father were there, my husband and all of our families and partners and friends were there, that was amazing. There was a great crowd but you could find your family in the crowd so it was super.”
Linda previously lost intermediate finals to Donegal in 2010 and Armagh in 2012. 2015 was her fifteenth year with the Waterford first team. It was now or never. “I was coming towards the end of my career and there was a few more as well. It just all came together. We had the wealth of experience from the older players and then we got this big injection of youth: the Murray triplets, Megan Dunford, Caoimhe McGrath, all these amazing youngsters. It didn’t knock a feather out of them. They didn’t care about playing in all these big finals, they were winning All Irelands all the way up. It didn’t faze them. There was more pressure on the older players because we had lost there before.” 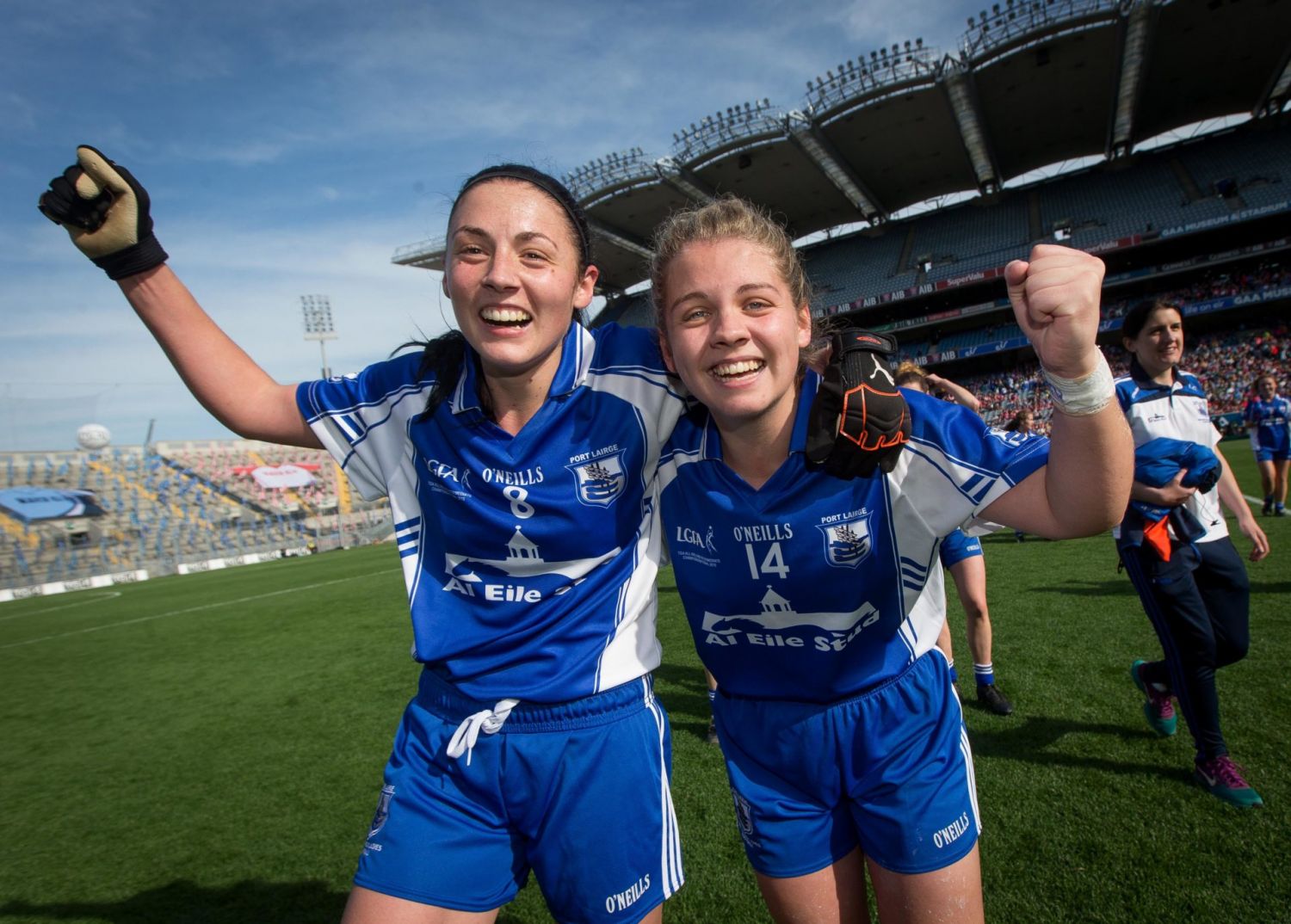 NO HURRY
She was in no hurry coming off the pitch. “I felt like I was out there for over an hour! I really enjoyed being out on the field afterwards and all the young girls around the pitch screeching and screaming and wanting to see the cup. There was a funny incident with myself and Gráinne Kenneally. They were ushering us off the field after the celebrations. ‘You have to leave the field now, the senior teams are coming out, they’ll be out in two minutes.’ There was a little group of girls down at the bottom corner and they were screeching and screeching and screeching. The maors didn’t want us to go down but we just burst through them and brought the cup down! We thought we could go anything once we won the All Ireland! Back in the dressing room, everyone was exhausted. It was just such a happy place compared to the two years that we lost when it was like a morgue.”
Her number four shirt from that afternoon is a prized possession. “I gave away a lot of my jerseys to the club girls: jerseys, shorts and tops but I’ll never give away that jersey. I was number four so that jersey is definitely staying in the wardrobe! I have all the paper clippings and I’m going to make it into a scrapbook someday. I was given some photos as presents from Sportsfile and a few of them are hanging up.”

SUPER SET-UP
In his first season as Déise bainsteoir, Pat Sullivan put in place a set-up that the players adored. “I’ve never been involved in anything like it before. There was nothing ever left to chance. He would check everything down to the last detail. In terms of our nutrition, the hotels we’d go to before games, everything was checked and double checked by Pat. It felt like a really professional set-up. So much was put into us that you try to give the same back. If we didn’t do it then, we would never have done it!”
The speed of her sister Aileen cut the Kildare defence to ribbons. She scored 2-2, including a thumping first half goal into Hill 16. “I don’t know what it was about that day but Aileen seemed to be ten per cent faster than she ever was before! They had a very speedy girl on her and the first ball she got, she took her on and left her for dead. That gave the whole team such a lift. She absolutely broke the net with a shot.”
Her clubmate Michelle Ryan was super sub with 1-3 in the last 23 minutes. “In certain patches Kildare came back at us and to have a player of Michelle’s calibre to come on. She’s not a typical substitute with her experience, her vision and her finishing. She came on and she just changed the game. She killed it off completely because there was a bit of resurgence around the time she was put on. She was probably one of the top two most influential players and she only had half a game!” 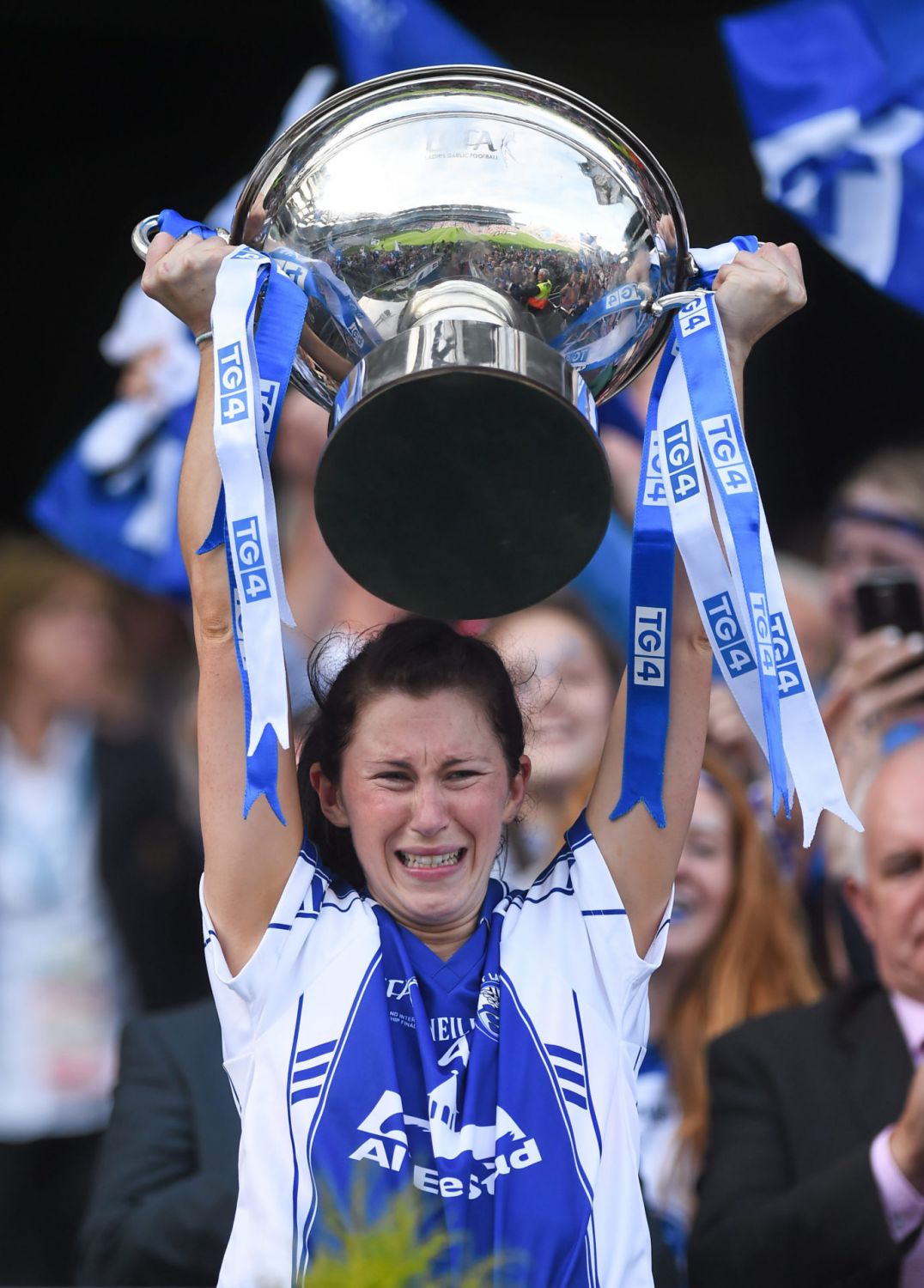 BACK TO BALLYMAC
The team bus unexpectedly stopped in her home village on the way back. “We had no knowledge at all that we were going back through Ballymacarbry, we never went through Ballymacarbry when we were going to Dublin at all. Pat Sullivan and Noel O’Connor called me up to the front of the bus and they said ‘we’re going through Ballymac on the way home.’ I couldn’t believe they were saying this to me. It was amazing that they changed the route home to go through Ballymac. We were on the phones then to get a good crowd in the village!”
It was a throwback to the glory days of the nineties. “Siobhan Murphy was the last captain and I was outside Dooceys and I thought she was the bees knees getting off the bus with the cup.”