“We would have gone through a brick wall” 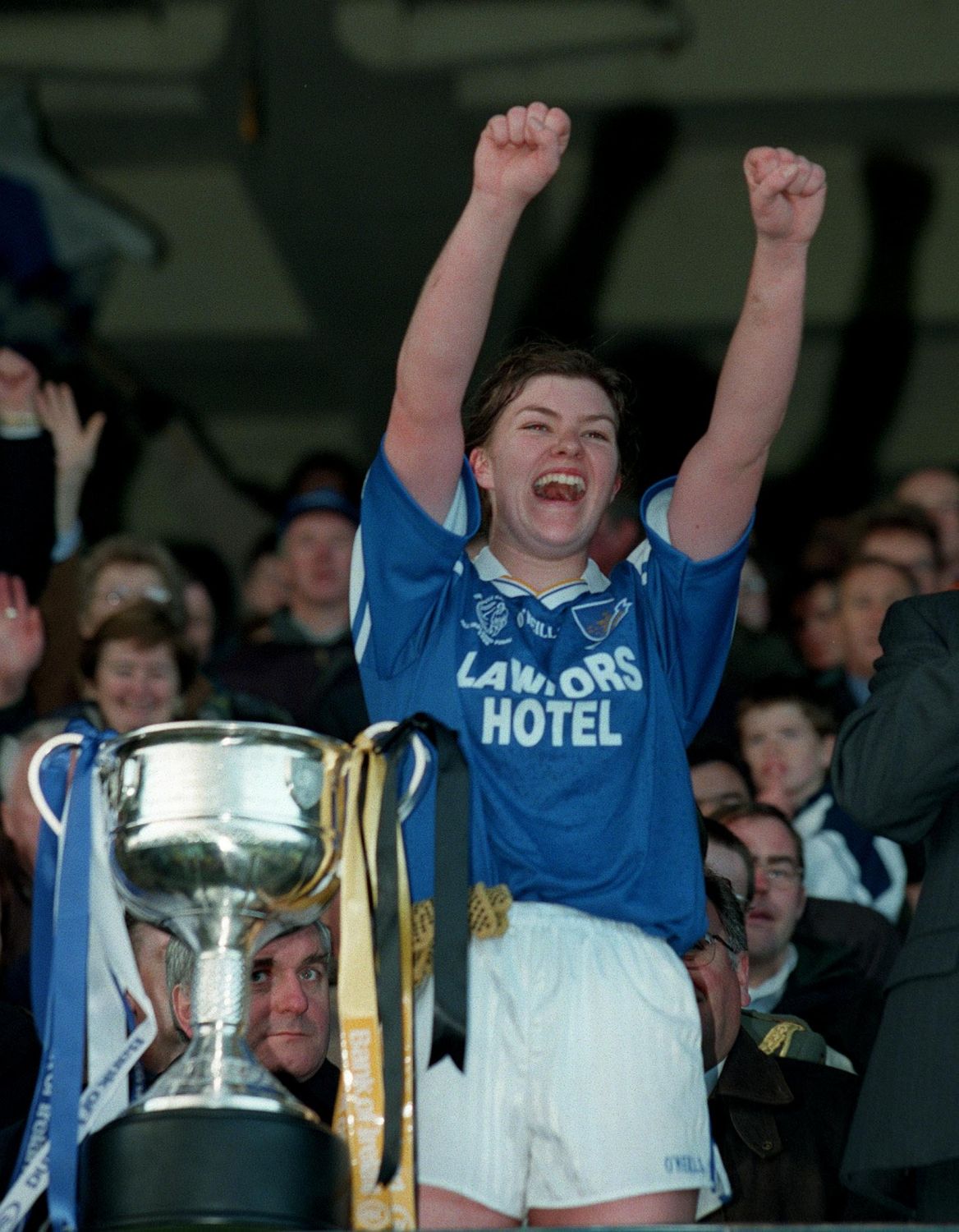 The Waterford ladies pushed themselves to the absolute limit to win five All-Irelands in the nineties. None more so than eight-time All Star Áine Wall.

OFF WITH THE CAST
In 1992, she broke her wrist in a National League quarter final against Monaghan but made a miraculous comeback to line out in the Munster final against Kerry five weeks later. She kicked four of Waterford’s eight points as they retained provincial honours in Fraher Field. “We were up in Portlaoise. I went in to block down a ball and her boot met my wrist, a pure freak accident, and I knew immediately it was gone, I couldn’t even lift my wrist. Ger Mooney brought me up the road to Portlaoise hospital. My hand was in a cast up to my elbow. In six weeks, the cast would be removed. I had to go to Cashel hospital then and they took off the cast and put on another one and they said it would be six weeks before they would take it off. The Thursday night before the Kerry game myself and my Dad went at it with a basin of water and a scissors. My mother walked into the sitting room to see us, she didn’t say anything and she came back in with a sharper scissors!”
That act summed up the sheer determination within that group of Déise players to succeed. “There was nothing going to stop me playing that match. Nothing. The torrential rain that came down that night in Dungarvan, it could have easily been called off! Martina O’Ryan did something similar a few years after. She broke her hand and removed the cast. I wouldn’t be encouraging anyone to do it but you do what you feel you must do at the time. It’s personal to everybody and that’s what I wanted to do. We would have gone through a brick wall at that time. We were so focussed. We were focussed but we had so much fun while we were doing it. We enjoyed what we were doing, we enjoyed playing and that made it easier.”

THE BREAKTHROUGH
A year earlier, Waterford ended Kerry’s reign as queenpins of Munster and Ireland. The green and gold were going for ten All-Irelands in a row but the visitors spoiled the party in Listowel. “In ‘89 and ‘90, we came close to beating them and we just fell short. In ‘91, as Marie Crotty famously said, we went up to win. We went seven points down and we had to dig deep and we went in at half time a point up. Crotty stepped into goal for a penalty and she put them off and they ended up going for the point. That year we were going to win. That was our year. That was make or break for a lot of players. If we hadn’t won in ‘91, a lot of people would have said ‘this is never going to happen’ and they might have given up.”
Amazingly, Áine attended her sister’s wedding the day before the big match. “Frances was on the 1986 All-Ireland junior team and the subsequent Ballymac club teams in ‘87, ‘88 and ‘89 and I would have looked up to her when I was younger. When she set her wedding for August 10, I thought ‘this could clash with a Munster final against Kerry.’ The wedding went ahead and the celebrations went ahead and the hangover set in two hours after the match!”

A SCORING MACHINE
Wall was a goal and point scoring machine in her heyday. 3-3 in the 1991 final, 2-2 in the 1992 final, 1-5 in the 1994 final and 0-5 in the 1995 final. Two players netted hat tricks in ‘91. Wall at one end for Waterford and Sue Ramsbottom at the other for Laois. “I started at wing forward and ‘91 was the first year that Michael put me in at full forward. I’d be at home and I used to feel that I was so small and I’d say to my father ‘how do I play at full forward?’ He said to me ‘if he puts you in at full forward, he knows that you can score goals. Do your best.’ That’s what I always did. When we went into Croke Park, I remember running out on the field and thinking ‘this is huge.’ I was fast and I was able to bring the full back out and Bernie Ryan, Geraldine O’Ryan and Marie were able to ping the ball over the full back line and I’d run onto it and I was lucky enough to be on the end of them. It was a team event that day.”
Her toughest opponents were her team mates. “When I started playing football, Ann Dunford was the one I was marking. You got no change from Ann. She thought me everything I needed to know about football. Then, I was marking of Donna Frost from Tramore and she reminded me so much of Ann Dunford. A super footballer.”

WATERFORD DREAM
It was always her ambition to wear that Waterford jersey. When she saw what Michael Ryan was moulding down in the Millfield, she wanted to be part of it. “I was playing under 14 Community Games and I remember looking at them training and thinking ‘God will I ever get on that team?’ and being in total awe of them and being in total awe of Michael. Everything had to be done just right. There was time for messing, there was time for talking but there was time for training. When you were training, you were training. Michael wouldn’t tell us until ten minutes before the match who was starting. Up until the day of the game, you were so nervous. ‘Am I going to make this team?’ He always kept us on our toes. He was some man to give a team talk. He’d be able to put the hairs standing on the back of your neck before a game. You’d believe that you would win any game at any time. He would have you so focussed and so ready.”
He put them through some hellish runs but the skills of the game always came first. “Everything was done with the ball. More often than not, we always had a football in hand. My mother used to say ‘Michael Ryan reared us all.’ We seemed to be always in the field, we seemed to be always training, we seemed to be always together. He demanded respect and we gave respect and he gave respect. When you have that, it works.”

FIERCEST OF RIVALS
Waterford met Monaghan in five All-Ireland finals and two All-Ireland semi finals between 1994 and 1999. One of the fiercest rivalries ladies football has ever seen. “Up to that, you had games that were home and away. If you played Mayo, they came down and played in Dungarvan and then you brought them some place later on to feed them and you socialised with them and got to know them. When Monaghan came to the fore, it was a halfway venue so there was never that camaraderie. It was always an intense battle when we met them. They were tough matches.”
Wall enjoyed ’94 the most when she shot 1-5 in a four-point win. A year later, Waterford reached their peak with a record breaking 4-14 to 1-5 victory against the same opponents. “In ‘94, we didn’t know what to expect with Monaghan. We did well to beat them, Annalisa Crotty pulled off some great saves that day. In ‘95, there was a gale force wind in Croke Park so we had a massive lead at half time. We were taken aback in ‘94 so in ‘95 we were all out.”
The controversial 1997 loss to the Farney County rankles to this day. It was the afternoon that referee Finbarr O’Driscoll played 11 minutes and 52 seconds of injury time. Michael Ryan described it as ‘curious’ in his post-match interview. Monaghan came from behind to win by two points. “That still hurts. It was like being at the Horse Show, we got a time fault for every foul we committed. He was just never going to blow that whistle. It actually still hurts. The only good thing that came from that was the clock and I think it’s something that should be introduced in the men’s game.” 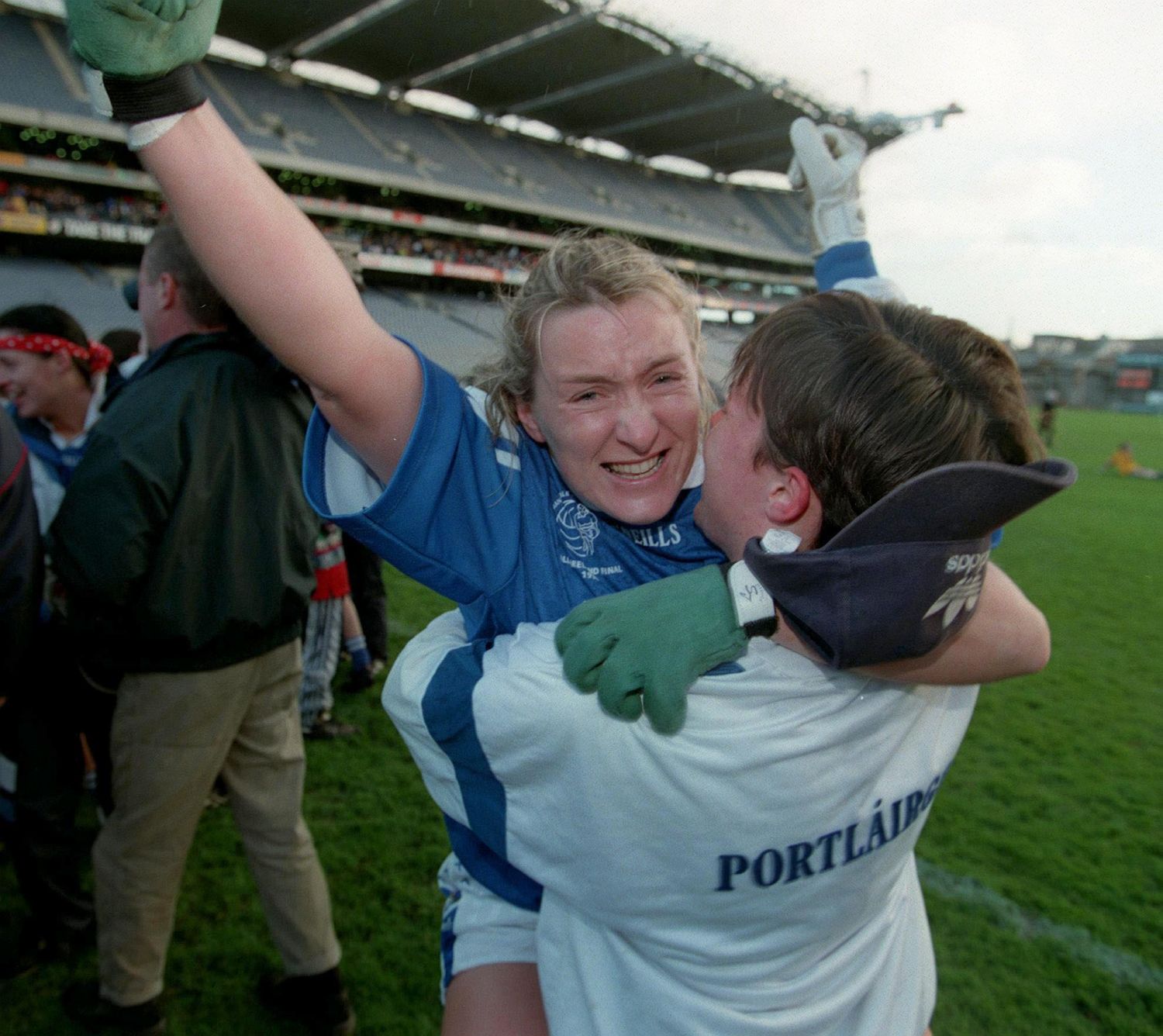 JUBILEE TEAMS
They didn’t need any more motivation for 1998 when the ladies in blue exacted revenge after a replay. “It was so hard to take and in ’98, there was a new focus and we were back like a new team. It was a draw and it had to go to a replay and we really dug deep and pulled out a victory. A lot of the team retired then and we never reached those heights again.”
Both of those finals were televised live by RTÉ as the profile of the game increased. “It was good football; it was a fast game. Con Houlihan used to write great articles in the paper about it.”
Waterford were back on their old stomping ground as the Jubilee team before the 2017 and 2019 finals. “We were like youngsters singing before we went out on the field! We really enjoyed it. Super days out, we were treated like royalty, I must hand it to the ladies football association.”