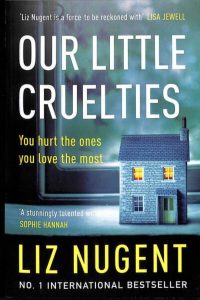 IN her inimitable style, Liz Nugent offers us a death on page one. The deceased is unnamed, and the reader does not know until the end which of the Drumm brothers has died. For seasoned fans of Nugent’s psychological style, this is not unexpected.

William, Brian and Luke Drumm had a privileged Dublin upbringing with their pushy showband mother, and their passive, patient father. Three siblings meant one was always left out, or perhaps it is correct to say that all three were left out.

Luke the youngest found unexpected stardom through pop music, William grew up to be a film producer and Brian was a teacher turned tour manager. Each character is selfish to the core, proving time and again how fiercely talented Nugent is at giving us vile people at the front of her narratives. Between the brothers there is rivalry, lies, greed and, sadly, a complete lack of understanding for one another’s motives.

A solid case is made for the later effects of a childhood lacking in love, and Luke, always forgotten, always a disappointment, waded in and out of substance abuse. William, having watched his parents’ relationship wither and dissolve through lies and disrespect carries those lessons into his life and destroys his relationships.

Brian steps over every single person to get to the top, just as his mother did. In childhood, Luke punished himself for what he saw as the sins of the mother, his religious zealous and this theme is prevalent throughout, that lives are tainted and marked by the sins of those we trusted.

The narrative is divided into three sections, one told from the viewpoint of each Drumm brother. On one hand this offers us a deeper and more rounded view of each character, given that individually, each is an unreliable narrator. However, the different viewpoints, combined with the jerky time lapses, means a strong novel was weakened by an overly ambitious character plan.

I engaged particularly well with Luke, his flaws were almost redeemed by the innocence surrounding him and the pitiful cards he was dealt. William and Brian were weak, vile people and written in a way to incite anger from the reader, and make them memorable.

Daisy Drumm was a true casualty from this tangle of family messes and, although her character was a little hollow, she served as a lasting symbol for paying for the sins of the father and her two uncles. I absolutely abhorred the decisions made regarding her, and I think Liz Nugent tried much too hard to create a link between her life and the life of the Drumm brothers.

Yet with superb character creation, and deeply unsettling psychological imagery during Luke’s section, this is a page-turner of a way to spend a weekend.

Dymphna Nugent contributes book reviews to the Waterford News & Star, the Irish Examiner, and blogs at The Book Nook on Facebook

Location revealed of next series of I’m A Celebrity… Get Me Out Of Here!