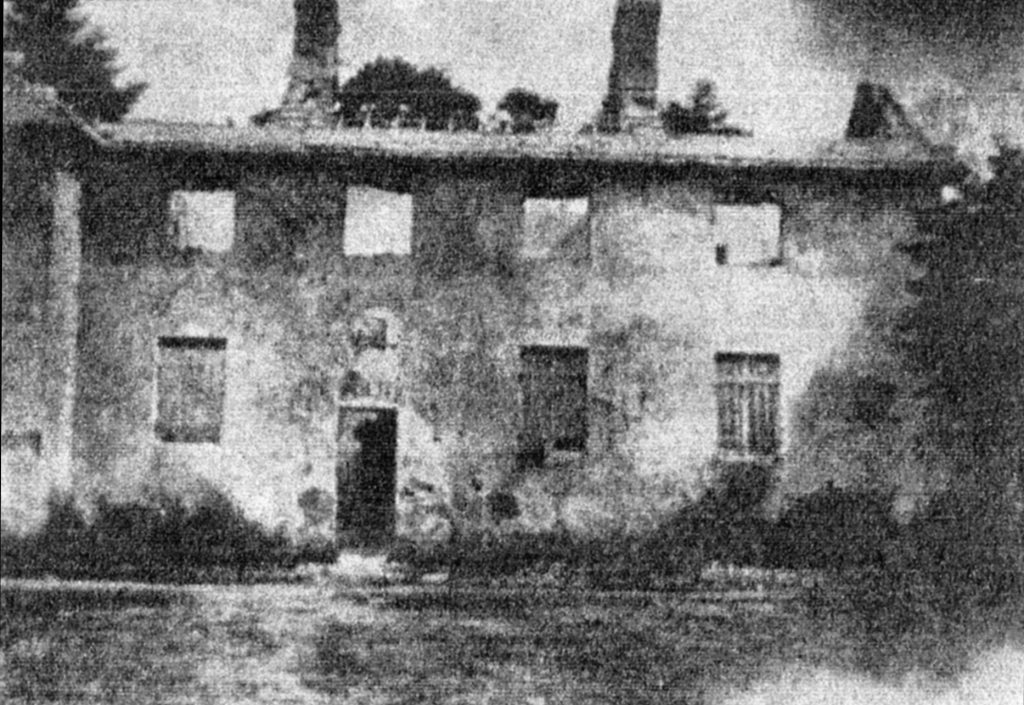 DURING the winter of 1919 raids by RIC and military on the homes of known IRA men were a frequent occurrence. The more active members such as Pax Whelan, George Lennon, the Mansfield brothers, Pat Burke, Nipper McCarthy, Ned Power, Seán Goulding and Pat Keating had to hide out and live ‘on the run’. Raids by the IRA for arms continued. Two houses in the Clashmore area were raided in October 1919. In November five of the more remote RIC barracks were closed down; these were Clonea Power, Villierstown, Cappagh, Araglen and Kiely’s Cross. The mail was intercepted by the IRA and police and military mail was marked ‘Censored by the IRA’.

1920 saw a series of attacks on RIC patrols and barracks. On the 10th of January a patrol was attacked on the Dungarvan Ardmore road. On January 17, Ardmore Police Barracks came under heavy fire from (according to the newspapers) one hundred men, at 3 p.m. This attack lasted for about two hours and was carried out by Pax Whelan, Pat Keating, Paddy Joe Power (Glen), Mick Mansfield, the Colligan Company, the Dungarvan Company and some local scouts. They numbered about 20 in all. They tried to throw a landmine through the fanlight of the barracks but it failed to explode. They did not succeed in taking over the barracks and there were no reports of casualties. The IRA withdrew back into the night and faded away.

Soon after the raid a party of military visited Mansfield’s house in Old Parish, where they found Jim Mansfield in bed suffering from an illness for which Dr. Hackett was treating him. He was pulled roughly from the bed and was being taken away but Dr. Hackett confirmed that he had been in bed at the time of the attack. While the military were conducting their investigations inside the house Charlie Mansfield had slipped outside and interfered with the mechanism of the military car so that when they prepared to depart the engine would not start. It eventually had to be pulled away by a horse. How lowly the mighty had fallen! 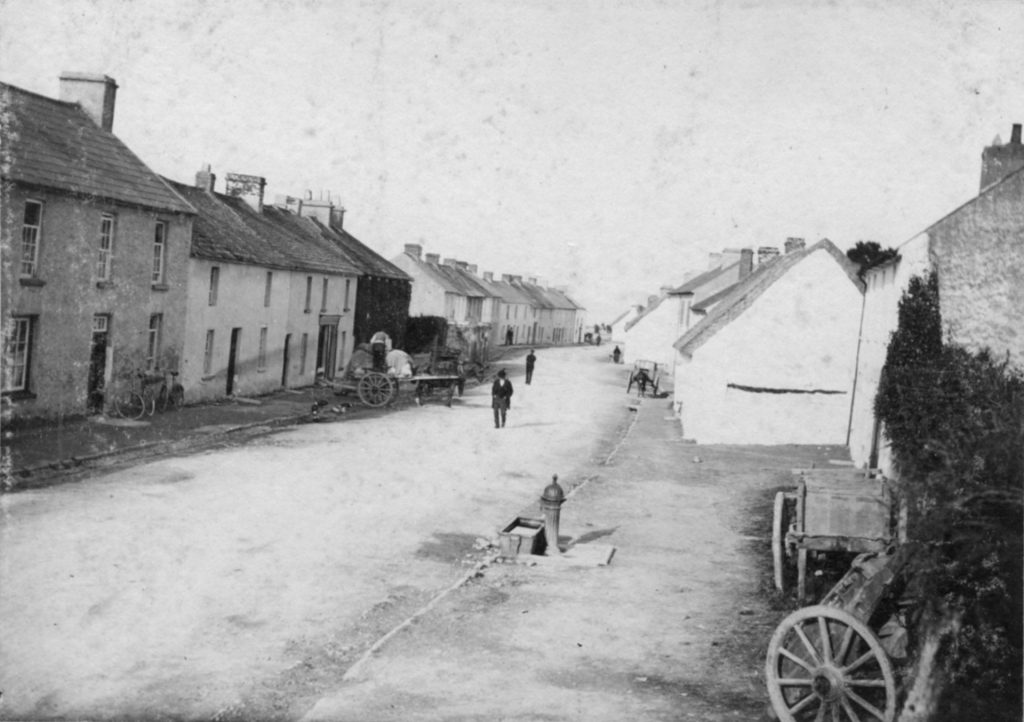 Main Street, Ardmore in the 1920s. The RIC barracks is the 4th building on the left.

The home of Patsy Whelan (father of Pax Whelan) was raided so often that he sent a key down to the RIC Barracks to save himself answering the door at inconvenient times.

All the RIC stations now put up defences. In January 1920 the lower portion of the stations at Leamybrien and Kilmacthomas were sandbagged. In Dungarvan the district inspector King was harassing the families of men on the run. He went too far when he called to Mansfield’s of Corbally and threatened to shoot Mrs Hannah Mansfield unless she informed on her sons. At the time Jim Mansfield was commandant of the Ardmore Battalion, while Mick Mansfield was Brigade Engineer. In order to curb King a group of Dungarvan IRA on the 2nd of February 1920 took his car from its garage, which was about a mile from his house. They then pushed it through the town, down to his house in Church Street where they drenched it with petrol and ignited it. Pax Whelan, Joe Wyse, George Lennon, Pat Lynch and Pat Power carried out the whole operation. Shortly afterwards King was transferred to Mallow at his own request. In an attack in Mallow on January 31, 1921, his wife was killed and King himself was severely wounded.

Kilmacthomas barrack was abandoned on March 13, and the police transferred to Kill. The curate of the Parish proposed a vigilante committee but it came to nothing because the people had no fear of the IRA.

In the first week of April the Income Tax offices at Lismore, Dungarvan and Waterford were broken into and all the files destroyed, again to interrupt the power of British Rule. As police barracks became vacant the local companies destroyed them by fire or with bombs. When the IRA went to Kiely’s Cross barracks they found a loaded Webley revolver on a table. It appears that the police had left in a great hurry. The abandoned police barracks at Colligan was burned on April 7 and on March 14 the barracks at Bonmahon was burned. The Fews company of IRA burned the Kilmacthomas barracks after they failed to blow it up. Painted on the wall of the burnt barracks was ‘Revenge McCurtain and to hell with RIC’. This was a bitter reference to the murder of Thomas McCurtain, Lord Mayor of Cork who had been killed shortly before by the RIC. In that same month the Kilrossanty Company raided Hobbs, Langley’s and Hunt’s for arms. 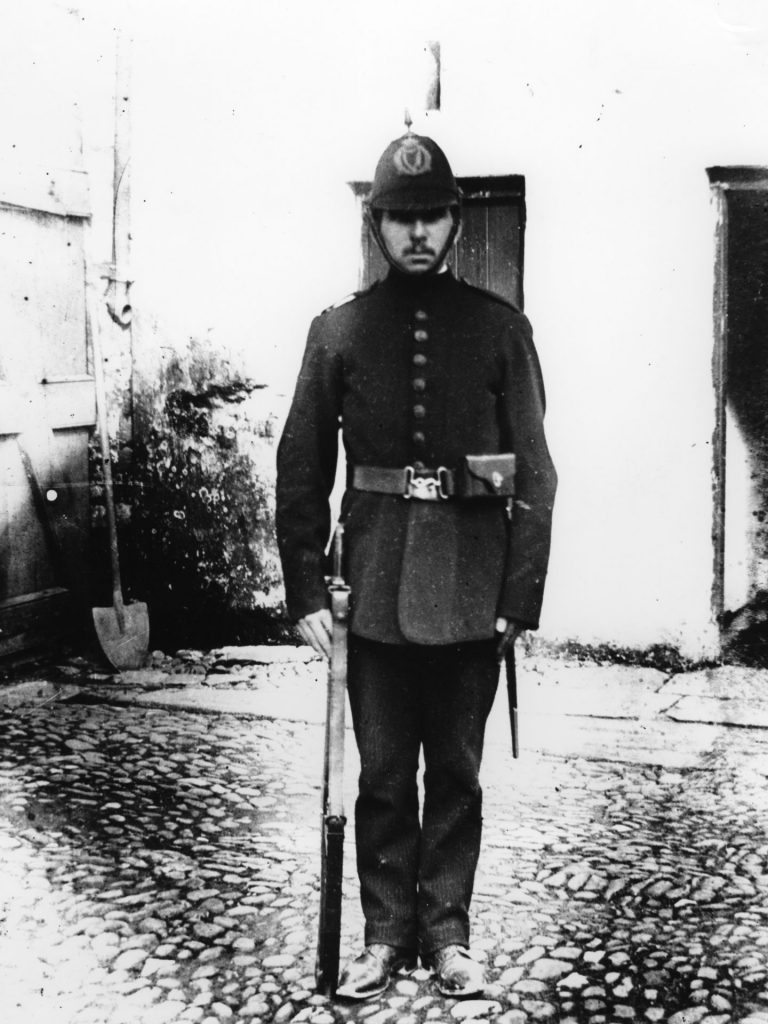 A member of the RIC in Dungarvan Barracks c1905.

Waterford County contained about 30 RIC barracks as well as Royal Marine stations at Ardmore, Ballinacourty and Bonmahon. British Military stations at Fermoy, Clonmel, Youghal and Waterford ringed it. Naval destroyers and torpedo boats patrolled the coast. As the guerrilla war increased Military and the Black and Tans who arrived on March 25, 1920 reinforced the Crown Forces. The York and Lancashire Regiment was stationed at Bayview, Ballinacourty. The West Kents (Buffs) were at Clonkoskeran and Dungarvan Barracks and Black and Tans at Church Street. Military and Black and Tans were also billeted at Lismore and Cappoquin. Because normal mail services were rendered ineffective, a light aeroplane was used to carry dispatches between posts. 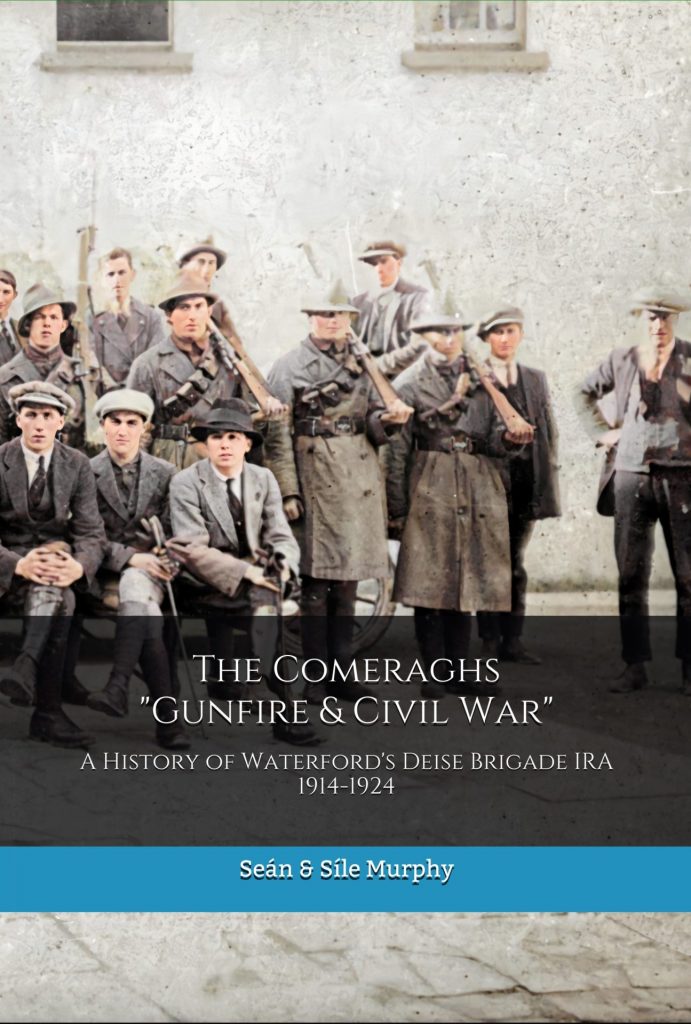 Written by Seán & Síle Murphy and originally published in 1980 under the title ‘The Comeraghs, Refuge of Rebels’, the book ‘The Comeraghs “Gunfire & Civil War”: The story of the Deise Brigade IRA 1914-1924’ is the seminal study of the war in Waterford. It was compiled using the first-hand accounts of the local veterans who participated in the struggle for Irish Independence. The 2020 edition, edited by Willie Whelan for Waterford County Museum and the Waterford Commemorations Committee, has been republished to mark the centenary of events in 1920. It has been updated with additional content, including notes from the original interviews and 31 photos.

The paperback (€18.50) and eBook (€9.10) are available to buy online from Amazon http://mybook.to/comeraghs or search for “comeraghs” on Amazon. To see the range of local history books published by the museum search for “Waterford County Museum” on Amazon. Profits go towards supporting the museum.

OUR SERIES CONTINUES NEXT WEEK