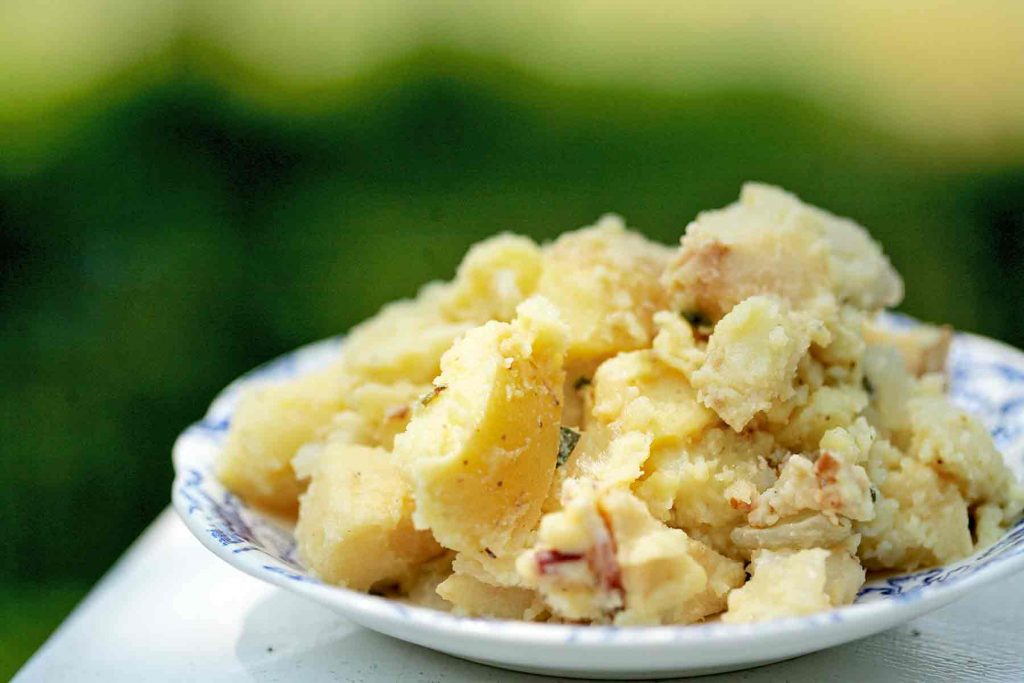 THIS is the ultimate side dish if you are having a barbeque. It goes well with literally anything that you can cook on the grill, and what is more the earlier you make it the better the flavour as the lovely apple cider vinegar dressing will absorb into the potatoes and give them an even better flavour. Just remember to slice the apple at the last minute so as not to allow it time to go brown (or place the sliced apple in a bowl of lemon water).

In a large pot, cover the potatoes with cold water with a good pinch of salt and bring to a boil. Cook for 20 minutes or until the potatoes are tender and cooked through. Drain and cool.

Cook the streaky bacon in a pan with some cooking oil until they are crispy on both sides and the fat has melted away. Drain the bacon in some kitchen towel and set aside.

In the same pan cook the sliced red onion over a medium heat until they have softened. Then add the apple cider vinegar, water, olive oil and sugar. Mix well and bring to a simmer. Season with salt and pepper then remove from the heat.

When the potatoes have cooled, place into a large serving bowl, and add the onion dressing and mix well. Chop the bacon into bite sized pieces and scatter across the potatoes. Then add the chopped spring onions and a final twist of fresh ground black pepper. Finally add the sliced apple for some fresh crunch immediately before serving.