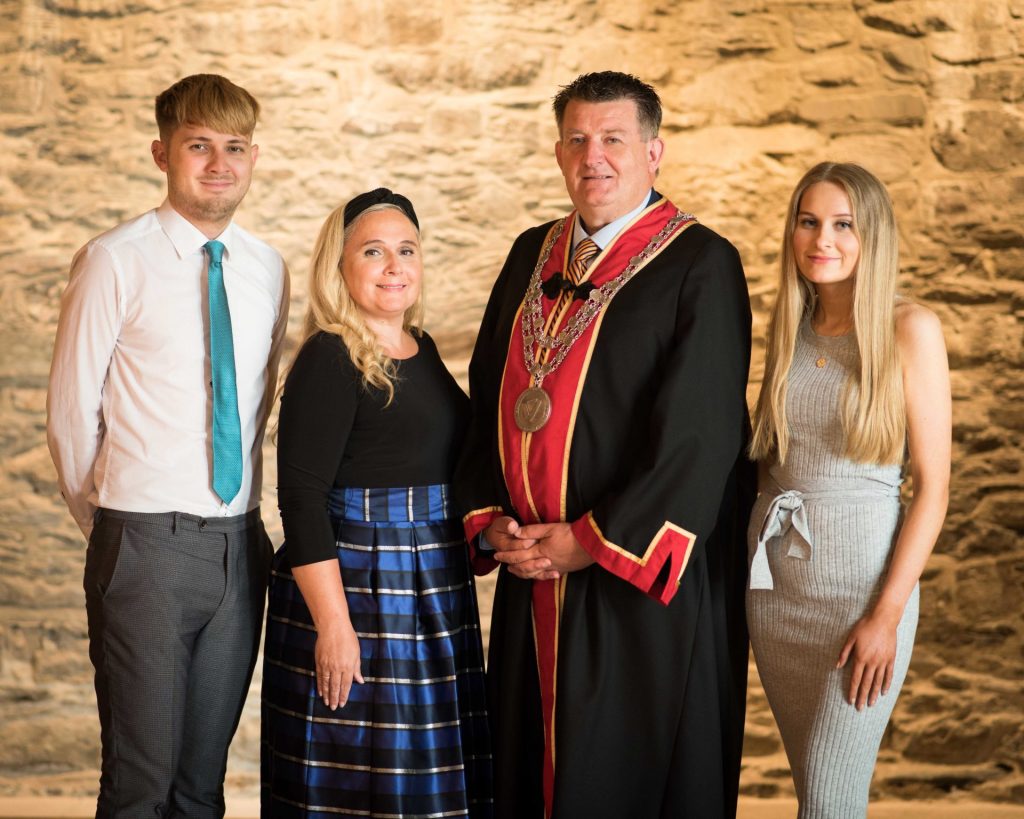 THERE’S a new controlling pact of Waterford City & County Council and it comprises of Fine Gael, Fianna Fáil and three independent councillors – Seamus O’Donnell, Joe Conway and Joe Kelly. After making a mess of their first task (see page 3), they finally got their numbers together when it came to the duty of electing the person who would become the new Mayor of the City & County.

Speaking beforehand, at a new look, socially distanced Annual General Meeting, outgoing Mayor Labour’s John Pratt reflected on his last year in office, and thanked those who helped him fulfil his mayoral duties so well and so diligently.

When it came to the election itself, there were two nominations – Cllr Damien Geoghegan and Cllr Conor McGuinness. In nominating the first named, Fine Gael Cllr Lola O’Sullivan said that Cllr Geoghegan was a “born and bred Dungarvan man”.

“Damien has been a leading figure in local politics for the past 20 years having built up a solid base from scratch in his hometown,” Cllr O’Sullivan said. “He’s a multiple poll-topper who brings a vast experience to the role having served as Mayor of Dungarvan and chair of Dungarvan/Lismore Town Council, Mayor of County Waterford and Chair of the Southern Regional Assembly.”

The proposal was seconded by Fianna Fáil’s James Tobin.

The second nomination for Mayor was proposed by Sinn Fein’s John Hearne.

“Conor McGuinness, from An Rinn, has been an activist since his teens and since his election to Waterford Council last year he has proved to be a hard working and effective local representative,” Cllr Hearne said. His proposal was seconded by Sinn Fein Councillor Declan Clune.

As the pact had the numbers, their selection – Cllr Damien Geoghegan – won the election by 17 votes to 15, and Waterford had its new mayor.

Speaking in the Mayor’s chair in WIT Arena – sadly not comparable to the one in City Hall – Cllr Geoghegan said that he was “proud and honoured to be chosen”.

“Albeit under the strangest of circumstances, it is certainly an exceptionally proud moment for me to take this office today,” Cllr Geoghegan said. “Although I’m a proud Dungarvan man, I’m a proud Waterford man first and foremost. Waterford and Ireland is a very different place to what it was just six months ago. Covid-19 has brought havoc to the world and Waterford hasn’t been immune to the damages caused by the virus.”

After taking a moment to remember those who have died from the virus, and praising those on the frontline, Mayor Geoghegan said that Waterford must ensure that its business, community and art sectors recover and thrive.

“These are the challenges facing us, but we as a council are playing a central role and must continue to do so,” he said. “We must rebuild and get money flowing through our economy again.”

Mayor Geoghegan went on to cite issues such as 24/7 Cardiac Care and the North Quays development as his priorities in office. Wearing the chains of office, the formalities of the mayor photograph were up next, with his family – wife Natanya, and two children Ronan and Caragh.