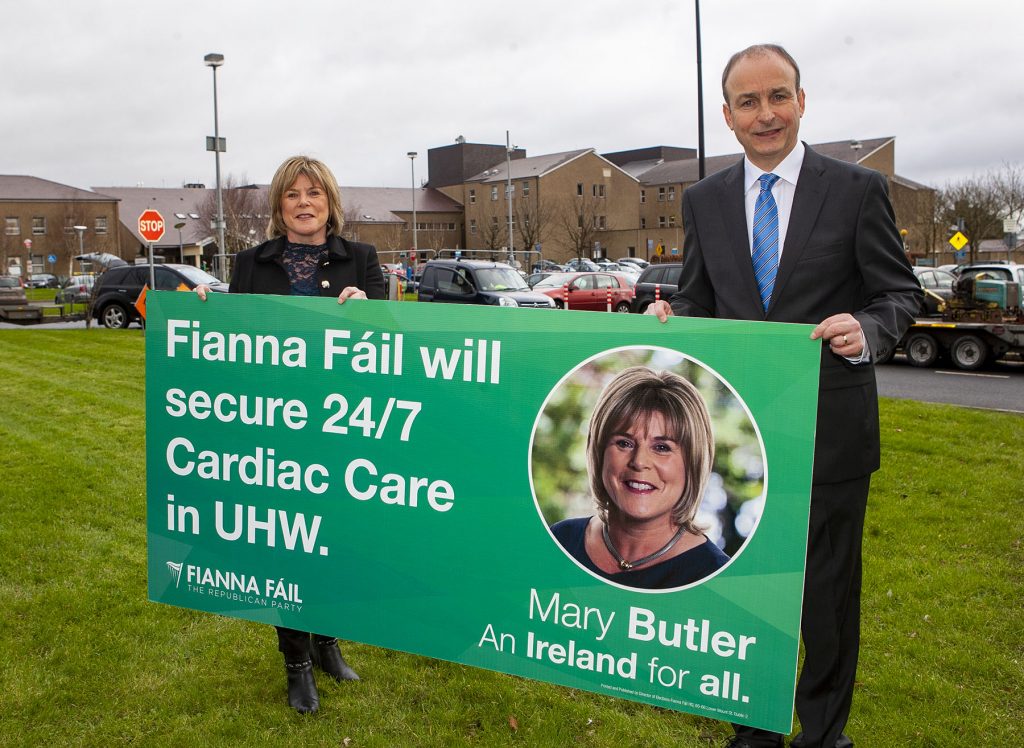 Taoiseach Micheál Martin with Deputy Mary Butler back in 2016 promising 24/7 cardiac care to the people of the South East.

GRACE O’Sullivan’s post on social media was interesting. “This is the speech I gave at the Green Party Special Convention on the Programme for Government. ‘Hi members, greetings from Tramore’.” Grace has walked the walk on the environment and that is why she was elected as an MEP. I found myself voting for her in that election. What was interesting was the bit greetings from Tramore. It tallies with a feeling many people express that we in Waterford have an utterly disjointed county and city. We rarely present ourselves in a coherent and united fashion. An MEP speaking from any place in county Cork would simply say greetings from Cork! We seem to be unable to do that. Why?

‘We should use every possible occasion to get the word Waterford out front and centre. Our total public image is difficult enough without splitting hairs.’

I get the same feeling when I hear WLR say that they are broadcasting from Waterford and Dungarvan. Is it not enough to say that they are broadcasting from Waterford, or does Waterford not include Dungarvan? I ask this because you may have noticed that many places now say, Thomastown, Kilkenny or New Ross, Wexford and so on. Maybe it reflects a growing parochialism or localism where the need to identify with an area is felt to be necessary.

In these difficult times we desperately need to establish a single identity and create a united front. We should use every possible occasion to get the word Waterford out front and centre. Our total public image is difficult enough without splitting hairs. Some suggest that Dungarvan wants to be seen as non-Waterford and that the upwardly mobile in Tramore are concerned lest they be associated with the, shall we say, more prosaic city? Who knows if any of this really matters? What does matter is getting a coherent message out for Waterford.

By the time you read this we will probably have a government. The Programme for Government has gone down like a stone in Waterford and finger pointing has already begun in earnest. On a wider scale, Fionn’s Sheahan writes in the Independent that, Soft-touch Green Party leadership are ‘nutters’ if they think they got a good government deal. This may be politics at play but the point being made finds a clear resonance with many people in Waterford. People feel that the political shafting we have endured for the past decade will continue unabated and with a massive Cork hegemony in cabinet they fear for even worse times ahead. There is a sense that in the push for national issues that local issues in Waterford were left behind on the table. Maybe Mr O Cathasaigh will save the day but the political forces ranged against him will be massive.

The 24/7 cardiology issue is now a weeping sore and unless Mary Butler and Michael Martin get to grips with the situation (presuming they are in government) within the next few weeks and issue a clear, coherent and believable message on the situation, then Ms Butler will be toast at the next election. FF is already a party in crisis looking for relevance. It looks old and sounds old and its policies increasingly look to be preserve the status quo. Mr Martin and Ms Butler stood outside UHW with an unequivocal poster saying, “FF will secure 24/7 cardiac care in UHW”. Is that going to go down in flames (with Ms Butler) as just another political promise to be conveniently ditched after the election? She and FF have escaped the consequences of that poster for the past four years by whining about “not being in government”, while all the time supporting FG decisions and claiming that the government could not be brought to task for a mere “regional” issue (unless it was in Cork). They may as well give SF a free ride to a second seat in Waterford at the next election and deliver the Taoiseach’s car to Mary Lou’s house.

Last Wednesday in the Dáil Matt Shanahan questioned Minister for Health Simon Harris. It now appears, despite everything that FG up to and including the Taoiseach have said and the promises made over the past two years, that the commencement and delivery dates of the second cath lab have been pushed out even further for reasons not allied to the Covid pandemic. Harris was his usual glib self while kicking the can down the road. Mischief in the HSE and Dept. of Health one suspects? Even worse though, apparently the old Cath lab at UHW, which was to be refitted and upgraded, has all the new equipment sitting in boxes in UHW because the HSE cannot find a way to get technicians on site to fit the equipment. If ever there was reason to suspect that our old friends in the SSWHG were again up to their old games of delay and obfuscate, then this is it!

A concerned reader sent us details of Simon Coveney’s list of projects in Ireland 2040 for Cork and the details will be explored a bit more fully in the coming weeks. Suffice it to say that at 2,488 words it is twice the size of this column and is jaw dropping in its depth and scope. That menu, which runs to several billion Euro, has been reinforced in the PfG. The Ireland 2040 project outlined a few projects for the South East, a water treatment plant in Wexford, another in Kilkenny and a new ward block, which has already been built, in UHW. The total expenditure is forecast at less than €100m in this region. That level of gruel has been confirmed and regurgitated in the PfG.

Taoiseach Varadkar, a man of Waterford extraction, was reminded a little while ago in the Dáil of the speech he made here in Bausch and Lomb in July 2017, nearly three years ago to the day. He said that as long as he was Taoiseach, Waterford would not be overlooked or forgotten. We went into this pandemic in a weak state, and are further weakened as we emerge. Some local members of FG, and there are decent people in the party, add up the sums and claim extensive delivery over the past decade, but in their private moments they must look around and confess to themselves that we have had a rough time. To the man in the street in this small city, the headline delivery of cardiology to UHW has not happened and neither has the university designation for WIT. It has become patently obvious that both those issues run counter to Cork aggrandisement and aspirations to own the south of this country. We will continue to tell them and their apparatchiks in government that Waterford does not intend to play the role of economic untermenschen for anyone!