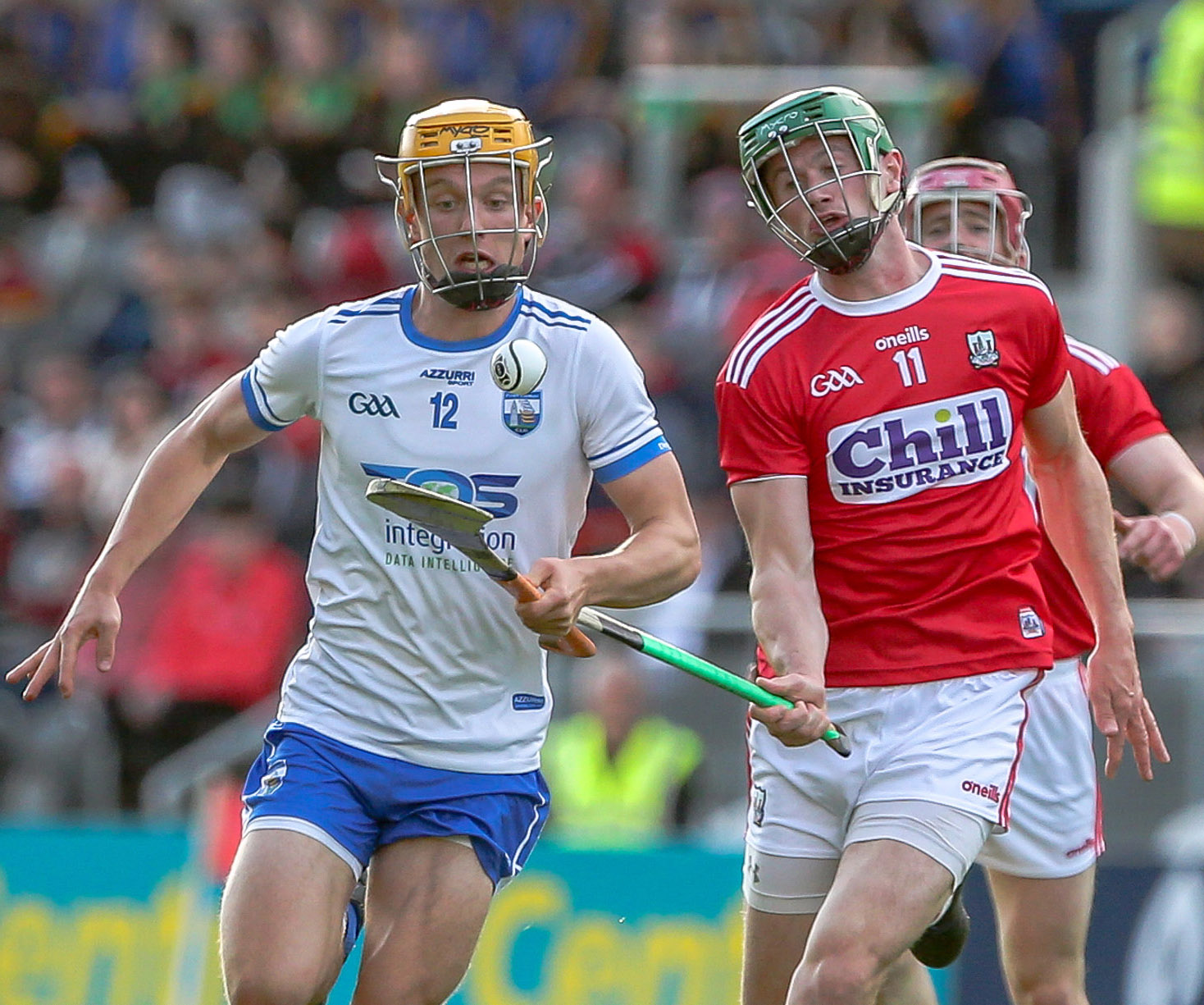 Waterford’s Jack Prendergast is tackled by Cork’s Seamus Harnedy during last summer’s Munster SHC clash between the two counties. They will face off again in this year’s Munster SHC semi-final on October 31 or November 1. Photo: Maurice Hennebry.

At last we know. Barring a dramatic reversal in the current direction of the Covid Pandemic in Ireland, the GAA will complete the 2020 Hurling and Football Championships on Sunday December 13th and Saturday December 19th respectively. To get to those final dates the restructured Munster and Leinster Hurling Championships, featuring five teams in each, will commence with one quarter-final game on October 24/25 with the semi-finals a week later and the finals on November 14/15.
There will be a back door for the beaten hurling teams in both provinces. Firstly, the six teams that do not make the provincial finals go into a qualifier draw with two Munster teams meeting two Leinster teams and the beaten quarter-finalists in each province included in the Qualifier round one draw with games taking place on November 7/8. The remaining Munster and Leinster teams receive a bye into round two against the round one winners with repeat provincial championship pairings avoided where possible. The round two games will take place on November 14/15 and the winners will be drawn against the beaten provincial finalists in the All-Ireland quarter finals on November 21/22. The winners will meet the provincial winners in the semi-finals on November 28/29, again with repeat pairings avoided where possible.

MUNSTER SEMI-FINAL
Liam Cahill and his men will not be at all disappointed with the how the Munster Championship draw has panned out. Indeed, it could be said that a semi-final draw against Cork would have been the preferred option and so it transpired. While Munster Council was meeting last evening (Monday) to decide venues it can be taken that the Waterford/Cork game will be played in Thurles with crowd restrictions based on the prevailing climate regarding the pandemic come the date of the game.
While we will all now look forward to the fixtures I remain entrenched in my view that the GAA have got it all wrong in that the rank and file club players will have their season condensed into a blitz like four week period before county players (officially) continue their season training for the start of the provincial championships. Regardless of whatever spin is put on it the GAA’s decision to complete the championships in December is driven by the desire to limit the economic impact of Covid 19 by getting in TV and Radio revenue by the end of the year.

NO CLUB ALL-IRELANDS
To achieve that objective, the provincial and All-Ireland Club Championships have been sacrificed and the GPA appeased. The GAA laid down in its roadmap that intercounty players should only train with their clubs for the period allotted to the county club championships with inter county training not to resume until September 14. In that situation county teams would not be covered by GAA insurance if engaging in organised training prior to that date. The GPA’s C.E.O Paul Flynn is seeking to have players whose clubs exit their championships cleared to return to training with their county teams in advance of the September 14 date with insurance in place.
In an amazing statement GAA President John Horan has said that the GAA has no plans to sanction counties whose teams return to collective training in breach of the GAA’’s own directive. Considering the manner in which Waterford were penalised last year for an alleged minor breach of the April embargo on intercounty training while the likes of Dublin footballers and others were exonerated the President’s position is difficult to understand at first. But then, it is not, for he, like the dogs in the street, knows that county teams are in training and many have been for some time, some in hotel complexes with sporting facilities and others in back wood venues off the beaten track.
The CPA (Club Players Association) has called on the GAA to take action against counties who sanction county team training sessions during the time allotted to the club championships but it is unlikely that any action will be taken and it will be left to County Committees to deal with such matters if they have the will to do so.

NHL ABANDONED
In recent years the GAA has been seen, at times, to make things up as it goes along and now that the decision has been taken to complete the 2020 intercounty championships it has decided that there is no need to complete the 2020 Allianz National Hurling League. On the weekend of the start of the Lockdown, Waterford and Kilkenny were poised to face each other in an eagerly awaited Nowlan Park quarter-final while Tipperary and Wexford were due to meet in the other quarter-final with the winners to meet Limerick or Clare in the semi-finals.
With the championship now set to start with provincial quarter finals on October 24 and county teams official back in training from September 14 surely the window of opportunity was there to complete the League in the intervening five weeks. I am sure all six teams involved would have been delighted to have at least one or more competitive games played before going into championship action even if it did mean playing under Social Distancing protocols. It appears now that there is some suggestion that with Limerick and Clare meeting in the Munster Championship and both teams having topped Division 1A and 1B respectively the winners of that game should be declared Allianz League Champions. Only the GAA could make that one up.
Anyway, Croke Park will be a very strange place in every way for the 2020 All Ireland Finals in December. Some counties will enjoy a happy Christmas though I dare say the winning won’t be quite the same as it would be in August or September.
The All Ireland Hurling Championship was drawn as follows.
Munster Championship
Quarter Final – Limerick V Clare on October 24/25.
Semi-Finals – Waterford V Cork and Tipperary V Limerick/Clare on October 30 or November 1.
Munster Final on November 14 or 15.

MUNSTER SFC
The Draws for the Provincial Football Championships remain unchanged other than it is now a straight knockout championship with no secondary competition, no back door and no Super 8. Waterford will play Limerick in Dungarvan with the winners to face Tipperary or Clare in the Munster semi-final while Cork and Kerry meet in the other semi-final in Pairc Ui Chaoimh.
It is understood that the Munster Minor Championship draws were also being made at last evening’s Council meeting and that they will be run on a knockout basis with no second chances.
The draws for the U-20 Hurling Championship will stand with Waterford set to meet the winners of Tipperary and Clare in a semi-final, straight knockout.