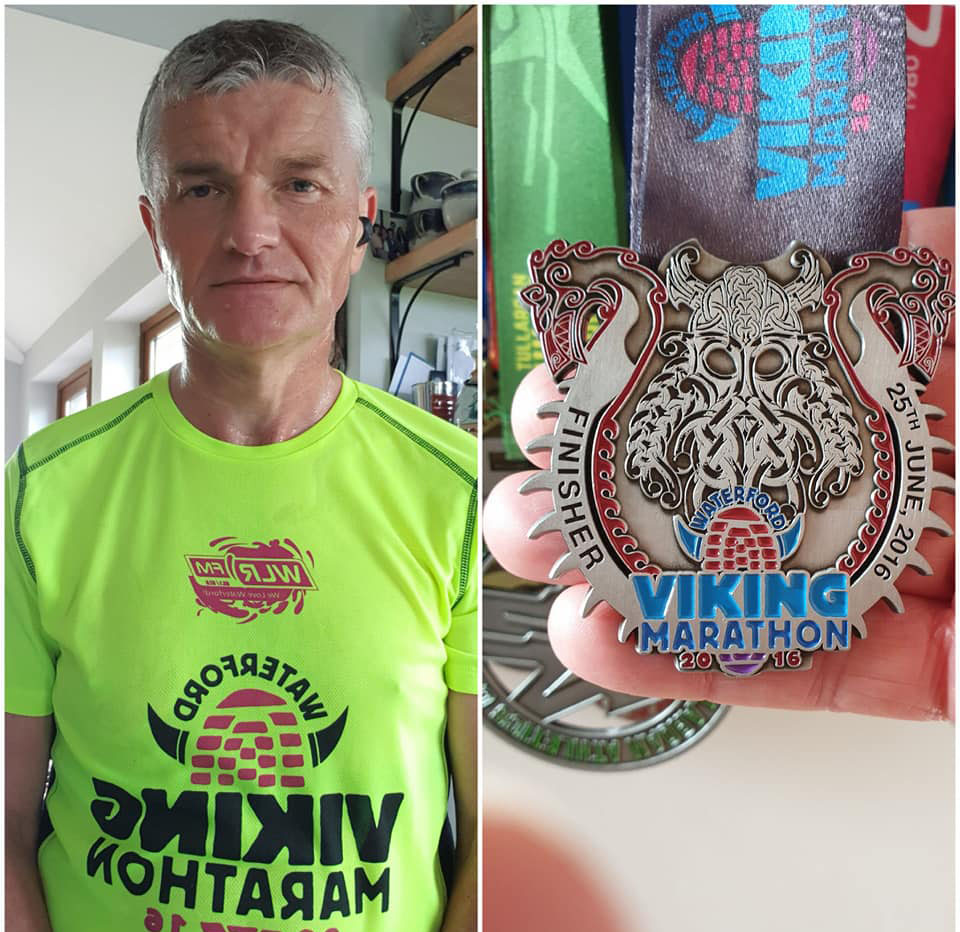 Shane with his Waterford Viking Marathon t-shirt and medal.

There’s no doubt that one of the real upsides of the 2020 lockdown has been the upsurge in two things, exercise and fundraising. And in a lot of cases the two things have come together with plenty of athletes undertaking running challenges to raise money for deserving causes.
One man who has taken on his own challenge to help raise much needed funds for two very deserving charities is Shane McDonnell.
Shane, who works in Teva, is currently in the final week of his 42 day running challenge to raise funds for the St. Vincent de Paul Society and the Alzheimer’s Society.
It all began on June 3 and it will end on Tuesday next, July 14. So where did the idea come from?
“I saw lots of other athletes and groups, like the Saturday Road Runners, doing lots of great stuff for charity and I thought that it was something that I could do too. I’ve ran 41 marathons so I decided I’d run a minimum of five miles every day for 41 days wearing the original top I received for completing that particular marathon and then I post on my Facebook page how my run went that day and my memories of the marathon that I’m marking that day. Thankfully it’s being going very well. I started out a bit cautiously but I’ve really gotten into it and I’ve been surprised at how I’ve been able to keep going. Of course not picking up any injuries has been key. I do a minimum of five miles a day and then I do a long run of about 14 miles at the weekend, just to keep the body right for when marathons will return.”

GAINED A DAY
It was supposed to be 41 days but that has now turned into 42. “I intended doing 41 days for the 41 marathons but it then dawned on me that a marathon is 42 kilometres so it made sense to me to make it 42 days…you have to be mad to be a marathon runner you know.”
What was Shane’s last marathon and what ones was he booked in for this year?
“Dublin last October was my last marathon and I was supposed to run the Limerick and Dublin marathons this year, before they were cancelled. I’ve done all ten Limerick marathons and I’ve done 11 Dublin marathons so far. I’ve only managed three Waterford Viking Marathons because of injuries and I’ve also done some of the famous ones like New York, Boston, Chicago and Berlin.”
What are the challenges?
“I’d normally do about 50 miles a week but I’d never run every day, I’d normally do only four or five days in a row so running every single day has been a challenge. I work three shifts a week so you’d be wrecked some days and the motivation wouldn’t be great but you just have to get off your bum and get out there and once you do, it always feels good. Thankfully I’ve been lucky with the weather, I think last Friday was the first day that I got well and truly soaked.” 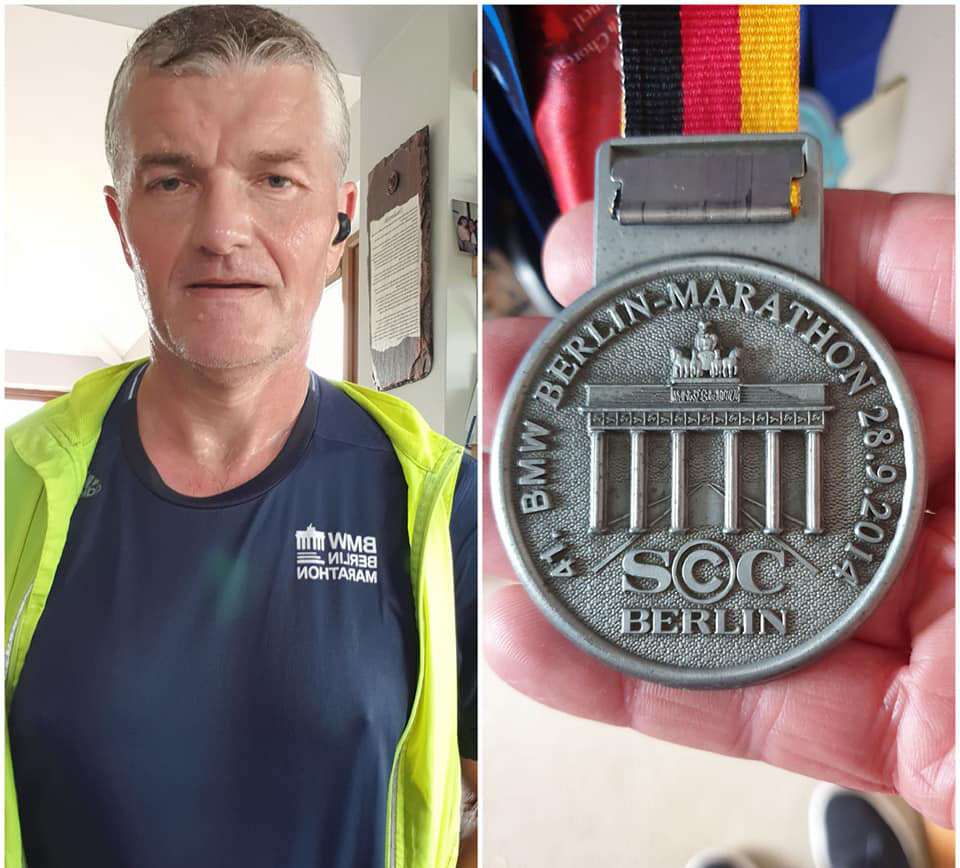 Shane with his Berlin t-shirt and medal.

GREAT RESPONSE
Shane has been delighted by the response he’s received to his posts. “The response has been brilliant. It’s great to get replies and nice comments and it’s a nice mix too between marathon runners and non marathon runners. I don’t think there’s a book in it or anything but it’s nice that people have enjoyed it. I suppose it gives an insight into the mind of a marathon runner. It’s very much a sport of highs and lows. If you have a good race then you’re on top of the world but if you have a day where the weather is atrocious or the course doesn’t suit you then it’s a tough game. I came to marathon running relatively late, in 2006, up to that it was soccer and gaelic football for me but once I did my first marathon I never looked back. I think there are two types of people who run marathons. You either run one, tick it off the bucket list and never go near one again or you get kind of hooked, like me, and run heaps, I don’t think there’s any in between.”
Shane is making a donation to his chosen charities every day and he’d love if you could do so too. All the details are on his Facebook page or you can donate by following the links below. Best of luck with the last week of runs Shane.
St. Vincent de Paul Society: www.svp.ie/shanes41daychallengeforsvp
The Alzheimer’s Society: https://www.justgiving.com/fundraising/Shanes41DayChallenge

On the Spot with……Gary Power