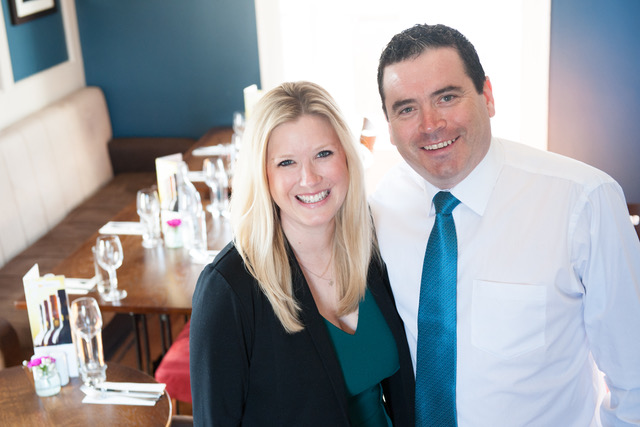 Caitlin and Eugene Lyons, who acquired Foleys On The Mall in Lismore in 2014.

Caitlin and Eugene Lyons were beaming behind their PPE masks upon re-opening the doors of Foley’s On The Mall in Lismore.

The skies overhead were a touch on the grey side as the Waterford News & Star took a table in the well-appointed yard to the rear of the 150-year-old building which flanks the Heritage Town’s Main Street and stunning South Mall. But that didn’t matter a jot.

Lismore has long held a special draw for me. As home to the Immrama travel writing festival in addition to the physical splendour of its castle and cathedral along with the natural beauty of the Blackwater and Lady Louisa’s Walk, I’ve never needed too great an excuse to visit.

So when the easing of the Covid-19 restrictions permitted a spin out west for a spot of lunch on Tuesday, June 30, it was a pleasure to call Foley’s, reserve a table and get in the car. As has been the case whenever I’ve frequented the establishment, the food proved good as the company.

“We closed on Sunday, March 15,” said Caitlin, a native of Dallas, Texas. “Like everyone else at the time, we had no idea about how any of this was going to go. In my heart of hearts, the one thing I did know that it was going to be significantly longer than the ‘closed for two weeks’ period that was initially flagged. So when we got the roadmap (for re-opening), that was a huge help because for months we were sitting here wondering, what if we can’t open until September or October? Our entire summer trade would have been gone and that’s the business that helps to carry us and so many other businesses like ours across the country over the course of the whole year so to potentially lose that would have been devastating.” 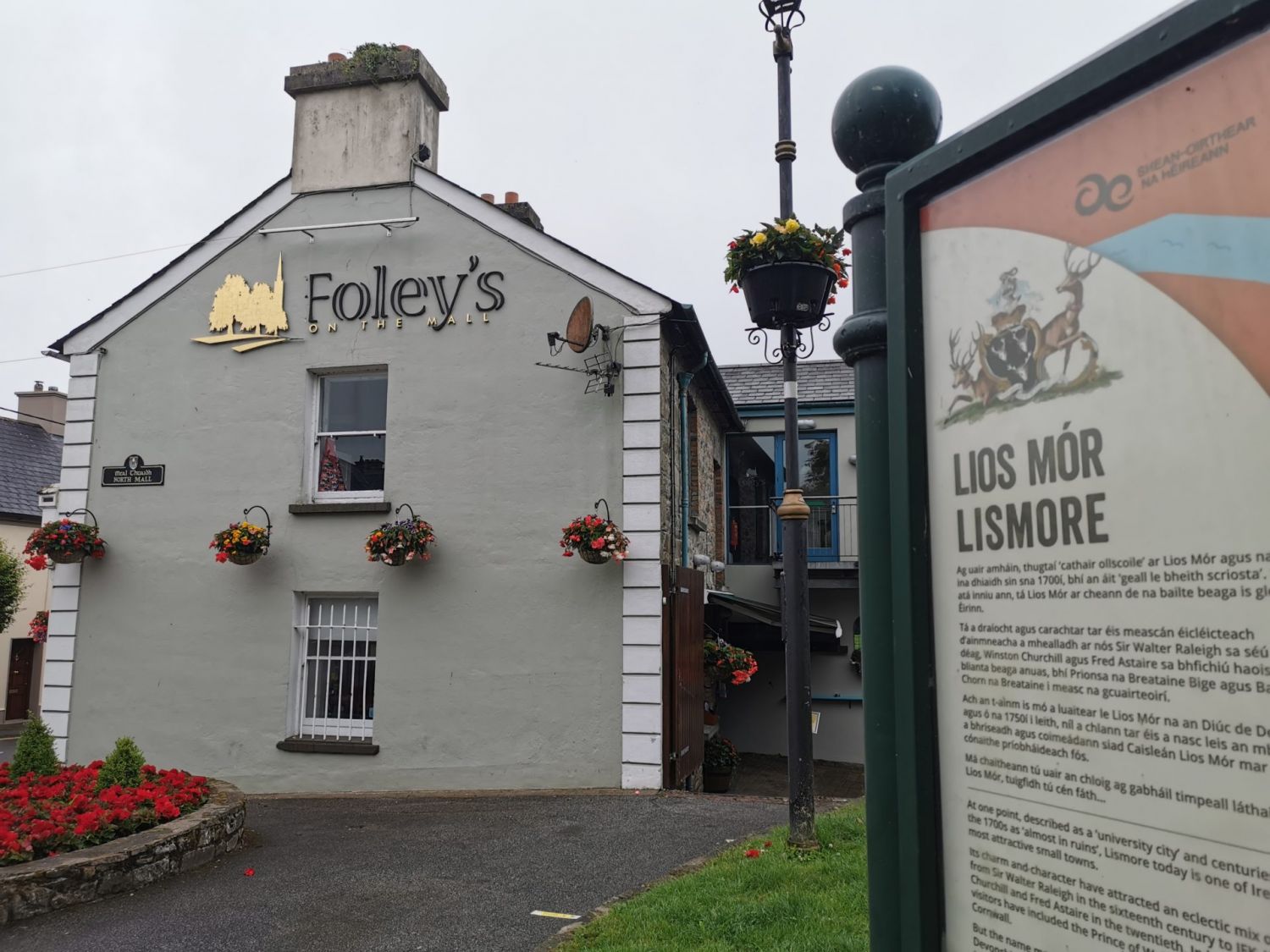 Foley’s is one of this reporter’s favourite West Waterford eating haunts.

“The summers are so important to us.”

Eugene, Lismore born and bred with over 20 years of bar management and leasing in Dublin behind him, added: “The volume we’d usually get in a normal trading summer would keep you in good stead heading into Christmas and over the winter months so the ‘summer surplus’ so to speak that we’re delighted to have coming into us is vital, especially for towns like Lismore and right across rural Ireland where you don’t have a 12-month tourist trade. So, when the roadmap was outlined, then we were able to breathe a little easier.”

In a regular circumstances, Lismore would have just hosted both the Blackwater Opera and Immrama Festivals, major cultural events which bring thousands of visitors into the town and its environs each summer.

“Historically, both Immrama and the Opera are incredible successes for businesses in the town,” said Eugene. “Our typical weekend for the Opera really kickstarts our whole summer and we’ve regularly been booked out for weeks, even months before it’s held. It really is a great start to the summer season so losing them both this time around, all the more so when the weather was so good around then, was massive. And the weekend the Opera was due to be on (at the end of May), the sun shone through from start to finish – every other year we’d have had some rain – you couldn’t make it up!”

Caitlin wryly commented: “This place would have been completed filled if we’d been open. It would have been buzzing with life – but instead we were all in our back gardens! But in saying that, we’re so, so happy to be open again. Between our local regulars and visitors from a little further afield, there’s a real sense of pleasure to be re-open.” 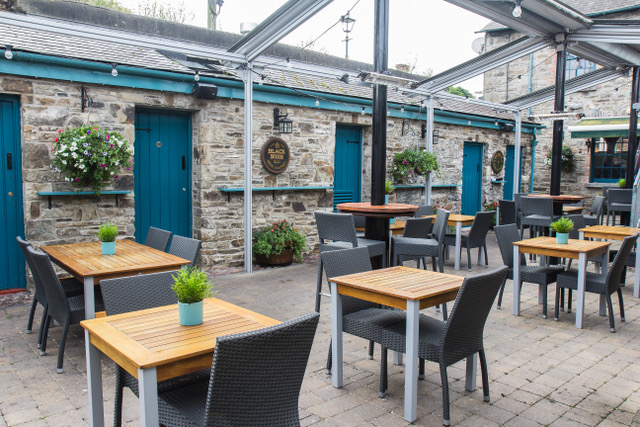 With physical distancing in mind, Foley’s On The Mall has had less amending to take into account than other hospitality businesses.

Happily back in business

Adhering to physical distancing guidelines, Foley’s (which operated a takeaway service during the lockdown) didn’t have to do a great deal of amending to meet the new requirements. “That was a huge help for us,” said Eugene, “and as Caitlin said, we’re blessed to have the level of outdoor space that we have, between where we’re sitting now and the beer garden behind us – we’ve another eight tables out there. Inside, we did have to slightly alter things but there was nothing too major required of us. Now the bar stools are gone out of the bar area (where customers aren’t permitted other than to pay their bill) but we’ve got upstairs and downstairs available for food – and all done without any physical reconstruction, which was obviously fortunate for us.”

Caitlin told me: “In a sense it’s felt like re-opening all over again (the couple acquired the business in 2014) and I think we were prepared as much as we could be for it. The staff has been trained (regarding PPE, hand sanitising, customer interaction, etc) and it’s a huge help that the public are so in tune with what’s required of them too. And the support we’ve had right from the get-go here has been fantastic.”

Eugene told me: “The core of any business, but particularly when it comes to hospitality, is local. Come the summer, obviously we have a lot of tourists here and we’re delighted to get their business but we’ve always retained our focus on local customers and that’s come back to us. We’ve always got it back.”

An opportunity to explore the county

Given that we’ve been urged to stay local when it come to our summer holidays, Caitlin and Eugene hope day trippers from East and Mid-Waterford might consider a pleasant day by the Blackwater.

“After all, there’s a lot of Waterford beyond Lemybrien,” said a smiling Eugene. “When the restrictions began to ease, from two kilometres to 20 kilometres to where we’re at now, people did begin to travel a little bit further and we’ve already had people from within the county who’d never been out this way before and that’s fantastic. So I’d imagine there will be a lot of people living relatively locally in the greater scheme of things who’ll travel around the whole county – and if they come our way, we’d be delighted to see them! I think the people of Waterford have always been good to support their local businesses and I do think we’ll get through this. I really do.” 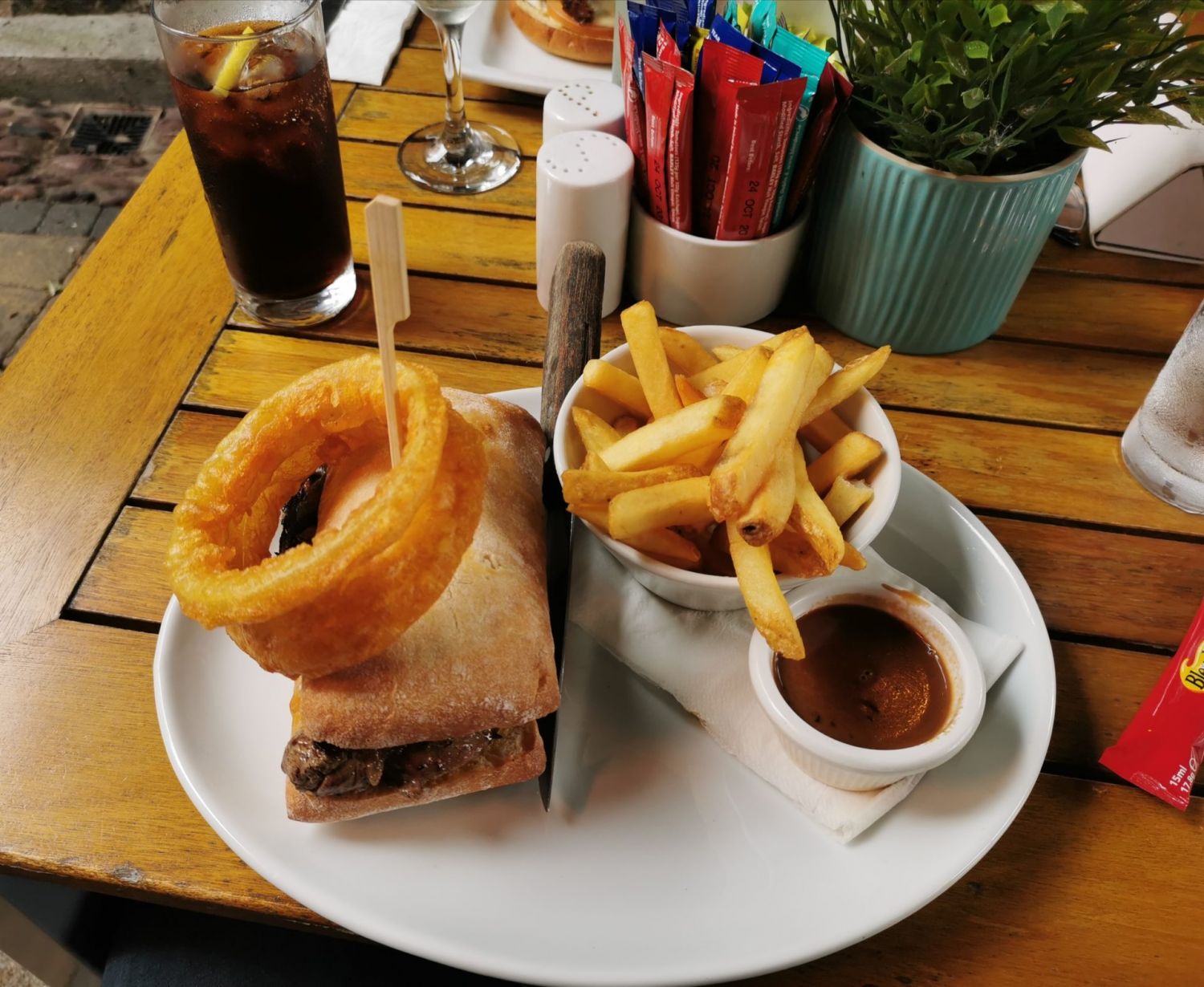 My first post-lockdown lunch was an absolute treat!