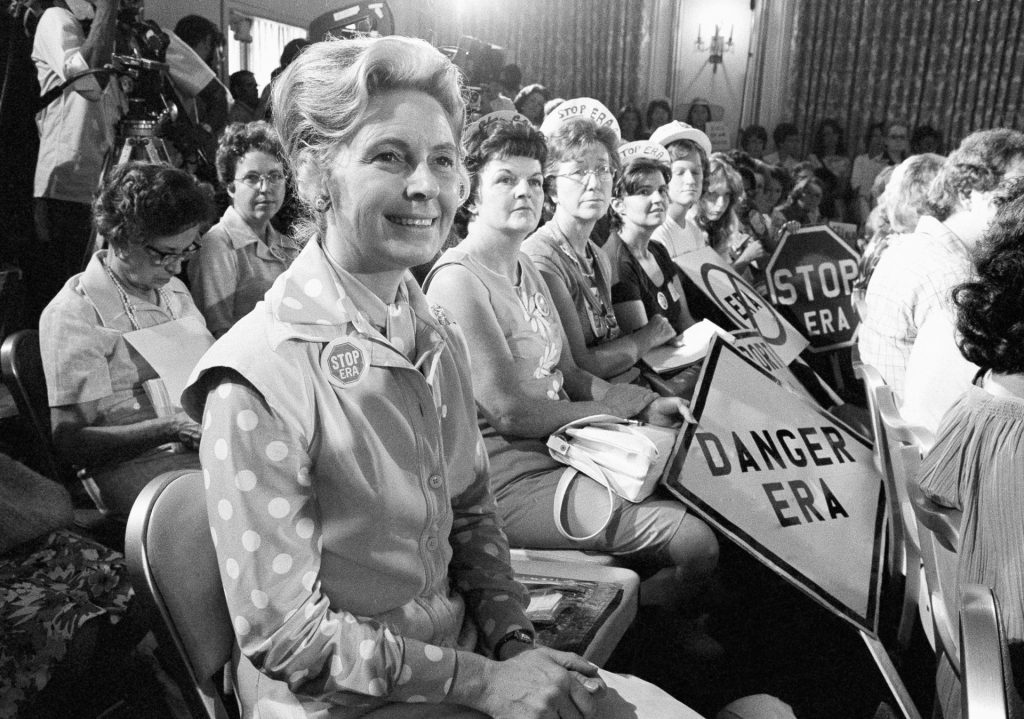 Phyllis Schlafly, pictured in the foreground on the left.

A NEW drama series, Mrs. America, premiered on BBC2 a few weeks ago. It is a dramatization of the life of Phyllis Schlafly, a devout Catholic, who espoused rather extreme right-wing views. She led the campaign to derail the proposed Equal Rights Amendment to the American Constitution in the 1970s. The purpose of the Amendment was to guarantee equal rights for all American citizens regardless of sex. In all matters, (such as divorce, employment, property rights etc), there was to be no distinction between women and men.

This Amendment was about to be ratified when Schlafly mobilised a very conservative group of women and others on the religious right to oppose its passing on the grounds that women would lose the protections they enjoyed at the time. She argued that women would be forced out to work, drafted into the army and men would no longer be compelled to support former wives after a divorce. She predicted it would lead to abortion on demand. Her campaign, brilliantly orchestrated, was successful. The Equal Rights Amendment (ERA) was defeated at that time. (Interestingly, Schlafly continued to campaign opposing liberalism, feminism, etc. almost until she died in 2016. At a rally in St Louis, Missouri, in March 2016, she endorsed the presidential candidacy of one Donald Trump. She hailed him as someone “with the courage and the energy to do what the grassroots want him to do”. Trump delivered the eulogy at her funeral later that year.)

The dramatic tension is generated by focusing on the nascent women’s liberation movement, which featured the brilliant leadership of Gloria Steinem, editor at the time of ‘Ms’ magazine. The women’s movement of course championed the ERA cause. However, the producers of the programme certainly portrayed Schlafly and her supporters in a very unflattering light, in a way that was almost scornful of the views they espoused. It raises serious questions for those who control our institutions, such as mainstream and social media, the political establishment, etc. where progressive ideas form the dominant narrative in almost all presentations. I am concerned that the more conservative views and ideas are no longer entertained and dismissed rather out of hand.

‘She failed to appreciate the positive contribution of the women’s liberation movement, which empowered women to be as engaged as herself.’

But the programme raises other serious questions for Christianity and for Catholicism in particular. To what extent should the Church accommodate its teaching to the prevailing values of our culture? For the church to be relevant, should it get with the contemporary thinking regarding issues, such as human sexuality; specifically should contemporary thinking on, for example, contraception, divorce and remarriage, gay rights, transgenderism, abortion, challenge the Church to change its teaching and thus become more relevant.

Phyllis Schlafly is, in many ways, representative of one school of thought on this important issue, which is that of isolation. She advocates isolationism, which is a refusal to engage in any way with the modern culture. Isolationists cling to their traditional beliefs and values and are very fearful of any change. They want to revert to traditional forms of liturgical practice such as the Latin Mass. They insist on receiving Communion on the tongue even at this time during the Coronavirus pandemic when all experts have strongly advised against this practice. They adhere rigidly to the letter of the ecclesiastical law on most matters (they are rather selective when it comes to the social doctrine of the Church and have no problem accommodating the free market ideology even though it has been severely criticised by Pope Francis). Isolationists, though relatively small, are more vocal than other groups and most demanding of episcopal support for their views. Bishops are more pressurised by isolationists than other folk and thus create a false impression of the level of support.

On the other hand, accommodation cannot be fully embraced as a primary strategy of engagement with the world. The late Bishop Fulton Sheen put it very well: “He who weds himself to the present age will find himself a widower in the next.” The Church would lose its prophetic voice and sacrifice truth for populism. For example, Pope Francis has consistently criticised the prevailing paradigm governing economics and development today. He strongly challenges the attitude of financiers, economists and experts in technology who relate to people and the natural world in a confrontational way, seeking only to control for their own benefit. Accommodating to the prevailing paradigm would have stifled the prophetic voice of Francis. Rather than accommodate or isolate, the Church must engage with the world and culture and interpret its message accordingly.

This is the way of Jesus, a friend of ‘tax-collectors and sinners’. The Holy Spirit speaks to us through the lived experience of good people. Listening to the stories of the divorced and remarried, Pope Francis realised that they could be welcomed to participate fully in the Eucharist, as in many cases, they were striving to live out the ideals of marriage in the limitations of their circumstances. We have learned much from the gay community and the Church must acknowledge that the formulation of its teaching has led to discrimination and prejudice towards gay people. Many bishops are of the opinion that gay couples might have their union blessed.

Through engagement with culture, Church teaching is informed by new developments in science and psychology and fresh insights based on people’s lived experience, leading to a new interpretation of tradition. It is a pity that Mrs. Schlafly refused to engage as it would have given her some awareness of the contractions in her own position. A powerful advocate of the stay at home mum yet she was actively engaged in politics nationally. She failed to appreciate the positive contribution of the women’s liberation movement, which empowered women to be as engaged as herself.