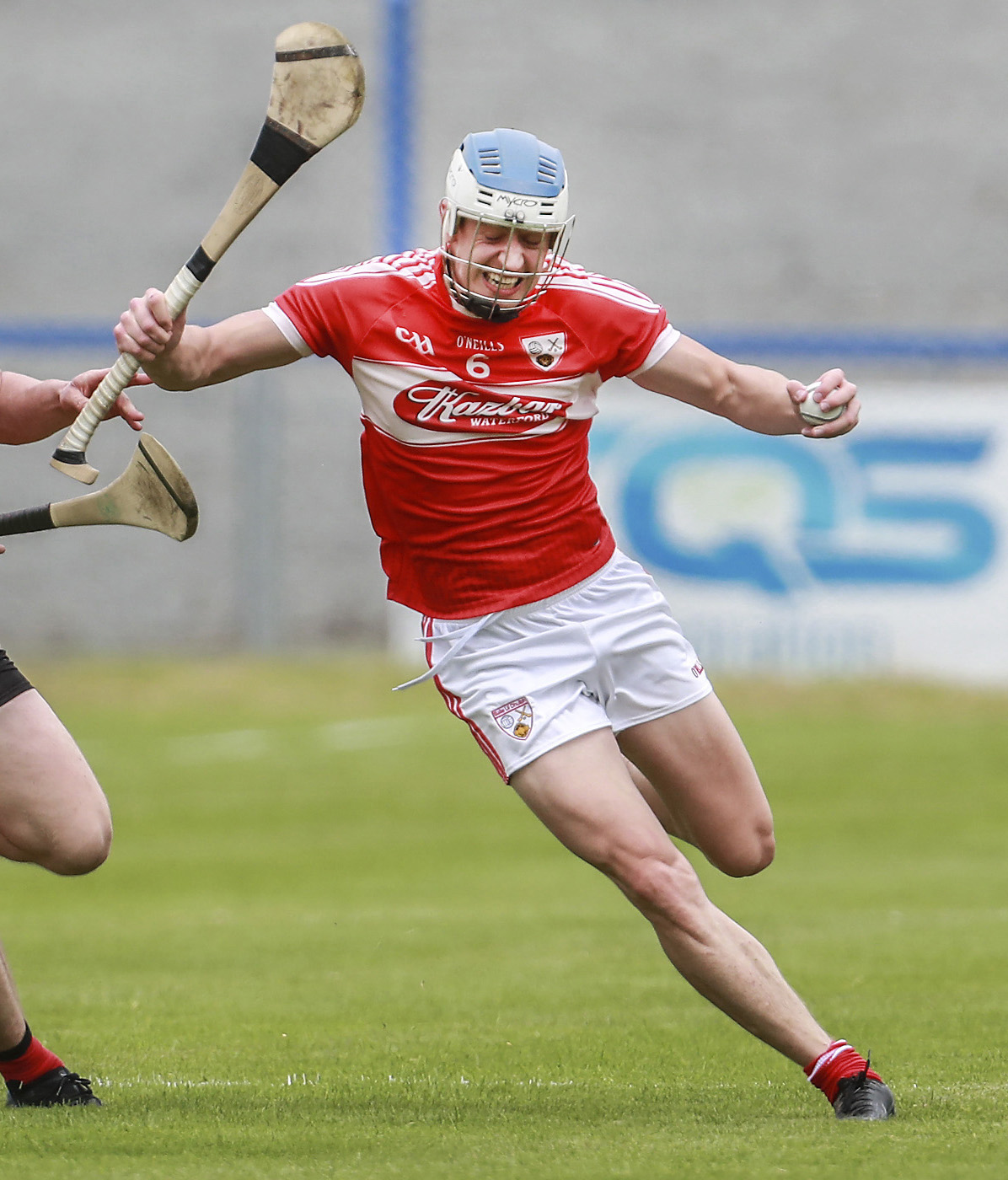 Cormac Dunphy and Ballyduff Lower atoned for their opening round defeat to Dunhill with an epic win over champions, Ballygunner in Walsh Park.Photo: Sean Byrne.

SAVIOURS WIN BATTLE OF THE SAINTS
Resilient St. Saviours came from behind at halftime to score a deserved 2-17 to 0-17 win over a young St. Mollerans side in Kill while Erins Own showed that they are well up for another strong challenge as they finished with fourteen points to spare against Fenor in Walsh Park on a score of 1-25 to 1-11.
De La Salle, with Bryan Cunningham in fine scoring form as he notched a personal tally of 1-12 in his side’s 2-20 to 0-17 win over 14 man Butlerstown in Walsh Park, looked strong with experienced seniors such as Ian Flynn, Paidi Nevin, Thomas Kearney and Dean Twomey driving on their younger players.

CAREW TOPS FOR FERRYBANK
The meeting of Ferrybank and Portlaw in Dunhill on Sunday afternoon would have been seen as a crowd puller in other times and the game certainly lived up to expectations with some fine individual performances and some top class finishing. Portlaw led by 1-12 to 1-8 at halftime, their goal coming from John Power and James Murphy accounting for six points. while Ferrybank’s response included an early goal from Robbie Carew and some fine points from Mark O’Brien. Aided by the breeze, Ferrybank had the better of the exchanges in the second half with further goals from the outstanding duo of Carew and O’Brien while D. J. Foran, though clearly not fully recovered from a nagging ankle injury, scoring Portlaw’s second half major leaving the final score Ferrybank 3-16, Portlaw 2-14.
Scorers:- Ferrybank – Robbie Carew 2-2, Mark O’Brien 1-5 (4Fs,2’65’), M. J. Sutton 0-3, Cormac O’Driscoll (Fs) and Neil O’Sullivan 0-2 each, Sam Lawless and Riain Tierney 0-1 each.
Portlaw – Jamie Murphy 0-7(5Fs), D. J. Foran 1-2, John Power 1-0, Luke Woods 0-2, Archie Walsh, John Dee and Blake O’Connor 0-1 each.

REPEAT OF LAST YEAR’S FINAL
The big game next weekend in the Gerry Kennedy Intermediate Hurling will see a repeat of last year’s divisional final between Ballygunner and Dunhill in Walsh Park on Sunday at 2 p.m. with the losers exiting the championship.
On Saturday we have two ‘Local Derbies’ with the losers exiting the championship. In Kill Portlaw will be favourites to come out on top against neighbours St. Mollerans in a 4.30 p.m. start while at 6 p.m. Butlerstown and Fenor will square up in Walsh Park with both sides hoping to bounce back from heavy weekend defeats.

Injury hit Ballydurrn suffered a second defeat, going down to Roanmore on this occasion while Ballygunner remained unbeaten with a 2-18 to 0-16 win over Passage in Group 1. In Group 2 Mount Sion held on for a one point win over Tramore in an excellent contest in Fenor on a score of 2-14 to 0-19 while Kilmacthomas got their first win when beating Dunhill by 1-12 to 0-9. With all Junior teams qualifying for the knockout stages the full list of third round fixtures takes place this coming weekend in all Junior Grades.