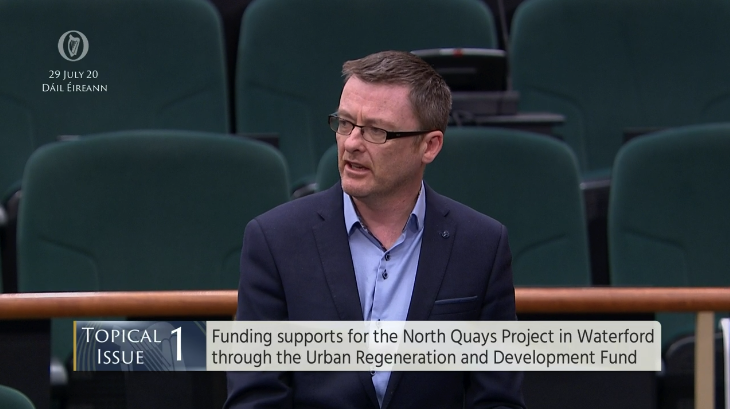 THE plan was that Sinn Fein TD David Cullinane would raise the issue of “funding supports for the Iconic North Quays Project in Waterford” through the Urban Regeneration and Development Fund (URDF) with the Minister for Housing, Planning and Local Government Darragh O’Brien at a Dail sitting in the National Convention Centre on Wednesday night (July 29). Unfortunately, Minister O’Brien wasn’t present, and instead, Green Party TD, Malcom Noonan, the Minister of State for Heritage and Electoral Reform answered Deputy Cullinane’s questions with a prepared statement.

“This request for funding has been on the table for years,” Deputy Cullinane said after first expressing his disappointment that the Minister who met the other four Oireachtas members last week, wasn’t there to address him this night. “This is a strategic development zone and although the ask on the Government’s side is over €100m and a significant investment, this is an investment that needs to happen if we’re serious about Waterford being a gateway city and being the driver of economic growth – which it can be and which it needs to be – for the South East.”

Deputy Cullinane then asked when the funding decision will be made and “if it will be on the entire quantum of money that’s needed”.

“The developers are looking for funding certainty, it cannot be a missed opportunity,” Deputy Cullinane said. “Without this funding from the Government the project does not happen.” 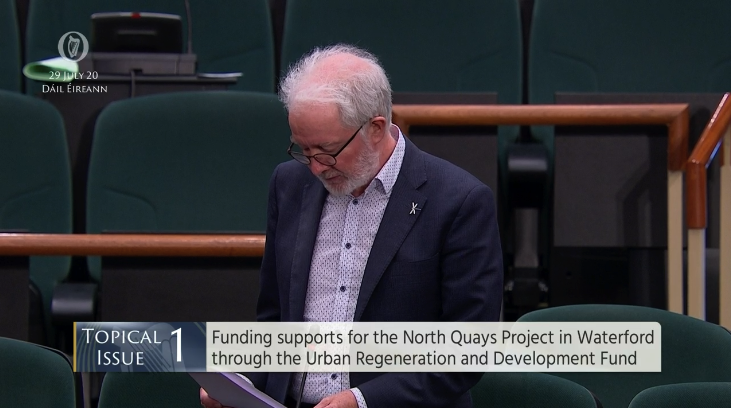 Minister of State for Heritage and Electoral Reform Malcom Noonan wasn’t the Minister that Deputy Cullinane was expecting to answer his questions.

Minster of State Malcom Noonan, TD for the Carlow/Kilkenny constituency said that he was “fully aware that this was an important project for the South East region – not just for Waterford City.”

Minister Noonan then proceeded to read the same statement that the Department of Housing, Planning and Local Government have been issuing to press and politicians since November 2018, with one notable addition at the end.

“In June 2019, the URDF support of €30m was ring fenced in respect of the advancement of the overall North Quays proposal pending further clarification of the project detail,” Minster Noonan said. “The URDF support is approved in principle subject to appropriate appraisal and justification and advancement in accordance with the public spending code and other conditions.”

Minister Noonan then said that one of the requirements for the funding to be approved was a cost benefit analysis and he said that since June of last year, the Department had been “working with Waterford City & County Council with a view to assisting in the advancement of the development of the appropriate appraisal of the value of the high value and complex project to meet the requirements of the proposed spending code”

“In that context,” Minister Noonan said. “Waterford City & County Council submitted an updated economic cost benefit appraisal on June 30 last, which must now be considered with the Department in consultation with the Department of Public Expenditure and Reform before a recommendation on further, whole project URDF funding can be considered. Our Department has already recouped €5.7m in respect of costs incurred by Waterford City & County Council on the planning and development of this project and further funding will be made available once this project advances through various stages of development.”

“There is nothing new in this,” he said. “Except for the part where you mention a new economic appraisal. I don’t know how many evaluations, economic or otherwise there has been of this project but there is a deep frustration from those involved at a local level including in council, that time and time again, this seems to be subject to economic appraisal, assessment, review.”

Deputy Cullinane also pointed out that Minister Noonan’s comments did not “chime with the letter of comfort” that was given to the other Oireachtas members this week.

“It still says that only €30m has been ring fenced which is welcome, but is a long way short of the overall quantum of money which is needed,” Deputy Cullinane said. “There’s between €65m and €75m which will be required from the URDF if this project is to go ahead. We don’t need more reviews and appraisals, we need the money. Show us the money and deliver this project to make sure that Waterford and the South East gets certainty rather than time and again, announcements that are not followed through.”

Minster Noonan then agreed with Deputy Cullinane that the current location of the Train Station “strategically, was in the wrong place for the future advancement of Waterford City” before saying that the “huge change in environment in the last few months” and that it was important that the robustness of the cost benefit appraisal “holds up and stands up from a public spending point of view.”