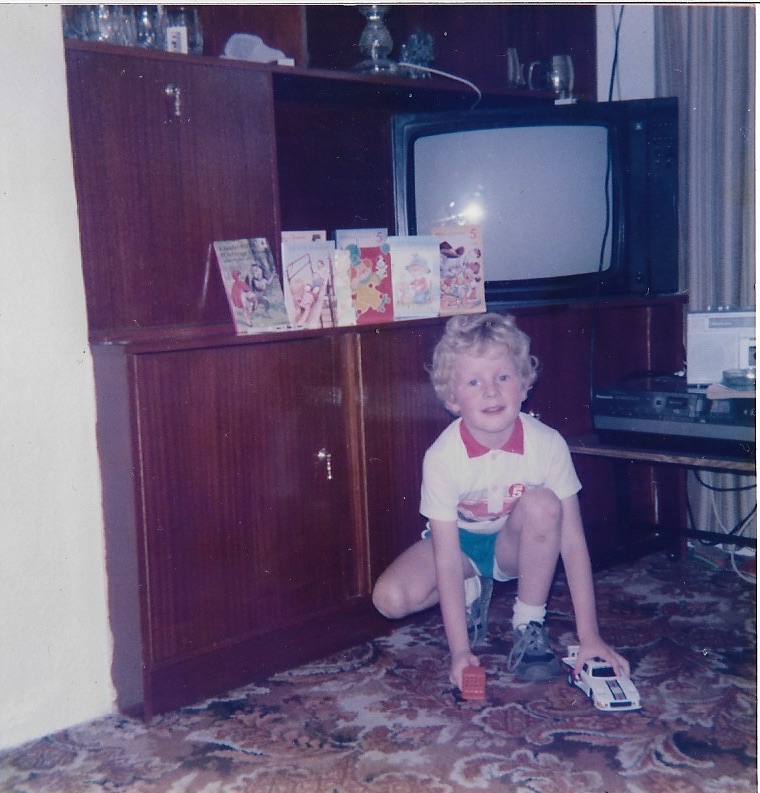 It’s been a long time since I was wearing a 5 badge and playing in front of a VCR and a very dodgy looking cabinet.

The View from the Blue, as printed in this week’s edition.

I WROTE a big long column this week, and I can’t lie to you, it was angry. When I start thinking about politics and the gobshites we have running our country, I tend to lose the run of myself. It’s the feeling of helplessness, and hopelessness – that they can pretty much do what they want, give themselves as many pay rises as they want and forgive and forget as many indiscretions as they want. It’s enough to drive a man to drink. Except we can’t do that now, unless we have a substantial meal to go with it. It’s hard to find a single bit a sense anywhere in the Dáil these days.

Anyway, the column went something like that, only for 800 or so words. I was quite pleased with myself too because I left no stone unturned, and apparently no politician unslapped. And then, I remembered that I’m turning 40 this weekend, and that’s probably as good a time as any to take a bit of stock.

My 40th year has been an interesting one to say the least. My relationship of 15 years ended and I did what thousands of other people do each year (no wonder there’s a housing crisis) – I moved out of the family home and into a city centre apartment. My two children, to their eternal credit, took the transition in their stride and they love coming over to me a couple of times a week just as much as they love being home with their mother. That was difficult, but I figured that if everyone else can, and it’s such a societal norm, then I can too.

I promise, this won’t be a depressing column, but it is going to get worse before it gets better. In March of this year, the man whose image I am made in, the man who shaped so many positive elements of my personality, my Dad, passed away after a three-year battle with prostate cancer. His phone number is still in the favourites section of my contact list and, honestly, if it rang right now, it would take me a few seconds to realise that it probably shouldn’t be.

It’s mad. I have a memory of a good few years ago – me playing on the Cork Road, probably late into a summer’s evening. My father shouted at me from the back door, something that many parents used to do back then. Some had a special whistle, my dad had a big booming DAAARRRREEENNN. I can’t remember what I did, but I didn’t come running as I should have, and I’m pretty sure that I threw in a smart remark for good measure. Anyway, I eventually went in and my father wasn’t best pleased. If it were a film, the next shot would have come from outside on the street, looking into our landing window, and my father chasing me up the stairs and into my room, probably to give me a clatter of some kind. I thought about that the other day when I realised that when that happened, he was probably the same age as I am now. Not sure why that’s significant, but I suppose we always just remember our fathers as being old, and never our own age.

Another hard part of leaving the family home, was leaving the family dog, ‘Busby’, named after the former Manchester United manager. We got Busby – a beautiful English Springer Spaniel with a huge heart – back in 2007 from a lovely man in Ring. In a cruel twist of fate, I had to go over and collect Busby last week so I could bring him to the vet…where he was put down because, sadly, he was wasting away from the same cancer that took my dad. As my daughter Ellie said to me last week, ‘Grandad is probably throwing tennis balls for him in Heaven’. Wouldn’t that be lovely.

So, I’m hanging on to those words, “Life begins at 40” because I have to admit, it feels like it’s kind of stalled these past few months.

Forgive me if this column reads like an ode to self-pity, that’s really not my intention. I have some amazing people in my life right now and as far as I’m aware, I have my health (being a catastrophising old bugger, I was always certain that I’d die before I was 40). My mother is still in the prime of her life and is being strong for all of us. If I had a wish right now (and my mother believes that both my grannies and my father are helping with this one), it’s that I’ll have a house/home again soon so I can have mammy over for dinner on Sundays, or maybe even a few Bacardis on a Saturday. Anyway, that’s just my way of drawing a line under the last year and hoping that life really does begin (again) at 40.