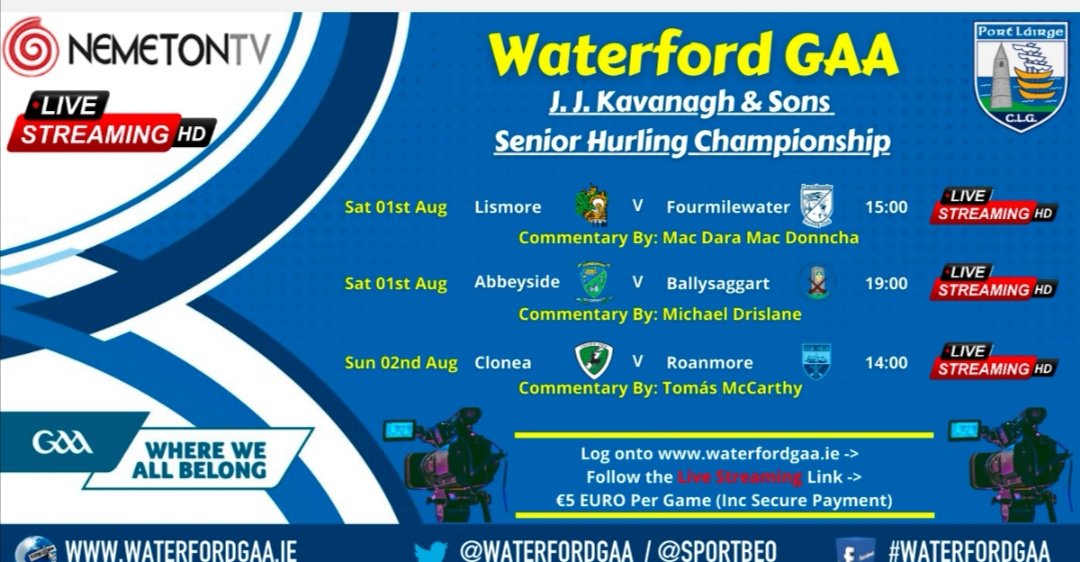 The lineup for this weekend on waterfordgaa.ie.

History was at the weekend when four club championship games were streamed live by Waterford GAA in partnership with Nemeton TV and there’s three more games to look forward to this weekend.
All four SHC games at the weekend were streamed on the Waterford GAA website at a charge of €5 per game. Next weekend sees three games being streamed, Lismore v Fourmileater, Abbeyside v Ballysaggart and Roanmore v Clonea, while all four games in the Co. SHC will be streamed the following weekend.
Nemeton TV was founded by Irial MacMurchú (Chief Executive), based in Ring in Co. Waterford, they are one of Ireland’s leading television production companies. Waterford GAA are delighted and very proud to be moving forward with “one of its own.”
At the launch of this partnership this week, Nemeton CEO, Irial Mac Murchú was “delighted to be entering a collaboration with Waterford GAA and while in this very uncertain times with the current COVID-19 pandemic is very excited to be providing top quality GAA matches online to the Waterford public at home and across the globe.”

NemetonTV CEO, Irial Mac Murchú; Waterford IT Officer, Richard Tobin; Waterford GAA County Chairman, Seán Michael O’Regan; Vice Chairman, Neil Moore and County Treasurer, John Jackson at the launch of Waterford GAA’s season of live streamed matches at Nemeton’s TV studios in An Rinn Photo: Sean Byrne.
Waterford GAA Chairman, Seán Michael O’Regan thanked “Irial and all the team at Nemeton TV while entering this exciting partnership which will hopefully live long into the future of Waterford GAA, Seán thanked all board officials, club officers, players, spectators and the general Waterford sporting family for all the hard work that they have done for their local communities during this pandemic.”
Speaking on Monday, Sean Michael said that they were delighted with how the opening weekend and the huge take up on the streams. “It was hugely successful and we got hugely positive feedback from all over the place, including Australia and we ask people to spread the word for the coming weeks.”
These games can be viewed on laptop, desktop, tablet, iPad or android smartphone. Also, it is easy to connect your device to your television so you can watch the action on a big screen from the comfort of your couch, with local commentators also.
As the championships progress, they will introduce additional games across both the County & Divisional Fixtures through the link on the waterfordgaa.ie website.