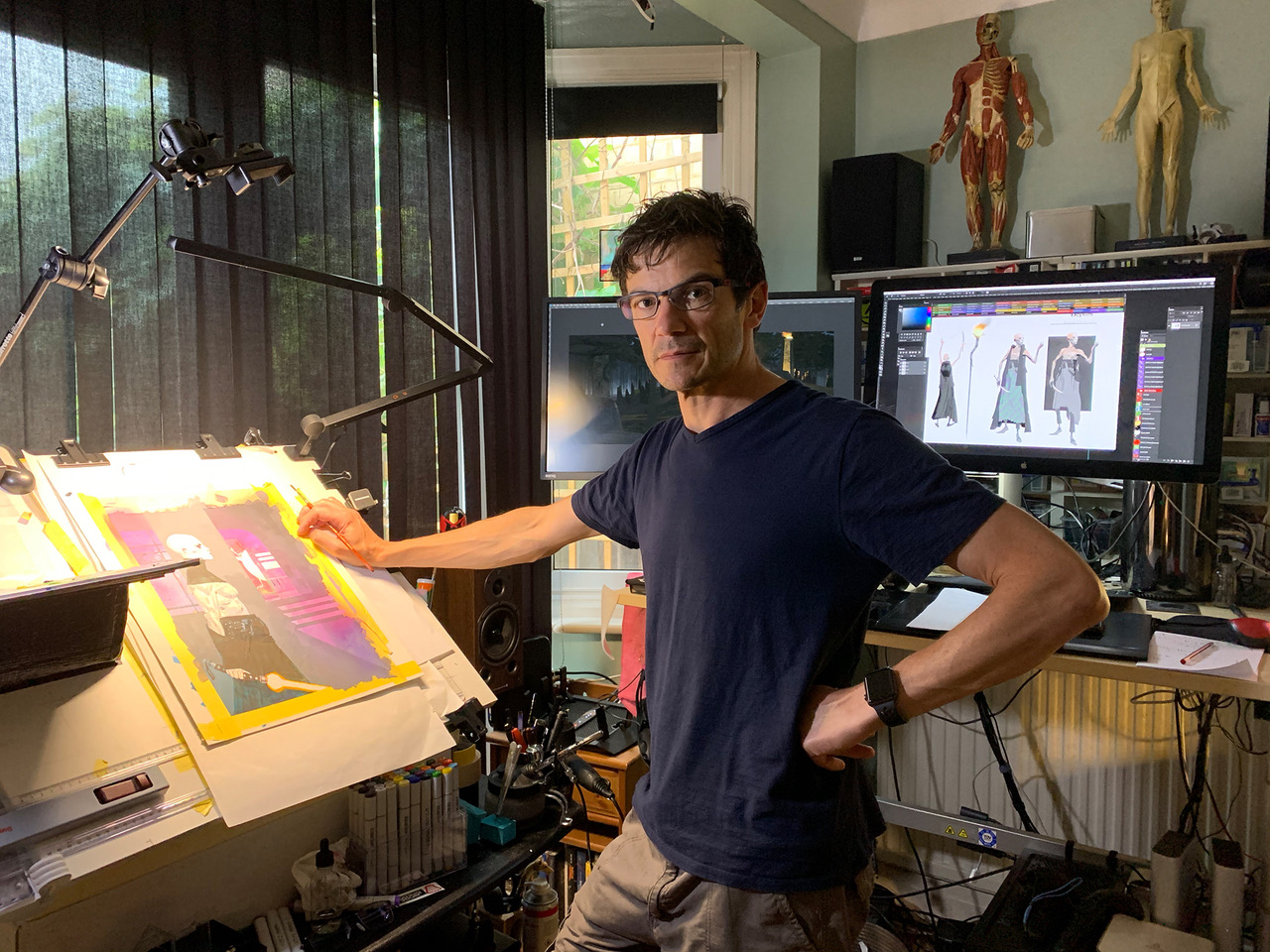 Abbeyside native Dermot Power, pictured in his London studio: “We grew up in a creative house.”

“I WAS staying and working at Skywalker Ranch and there I was, in the art department surrounded by models and props and memorabilia from the original ‘Star Wars’,” Dermot Power told the Waterford News & Star. “That was crazy. Then George Lucas walks in and I found myself waiting to wake up!”

A native of Abbeyside, son of Sean and Nuala (nee Murray) and sibling to David, Gerard, Winifred, Eveleen, John and Jane, Dermot has truly followed his passion since the late 1990s, working in movie concept design.

Now living in London with partner Charlotte and father to Eolan, Dermot has worked on blockbuster productions, including Star Wars Episodes II (‘Attack of the Clones’) and VII (‘The Force Awakens’), three ‘Harry Potter’ movies and both of the ‘Fantastic Beasts’ instalments.

Educated at Abbeyside National School and St Augustine’s College (aka ‘The Friary’), Dermot grew up in a house teeming with creativity.

“My Dad is an artist; he paints beautiful watercolour landscapes, mostly of the Waterford area, including the well-known views but also of places he’d go to hunt for pheasant and fish for trout – he’s painted many seascapes from those times in the summer when he went sea fishing. Both my Mum and Dad are retired teachers and my Mum loved acting and theatre so that was the kind of house we were brought up in – I don’t remember a time when we weren’t drawing and painting and being creative.”

As for his strongest childhood memories, Dermot said: “What immediately springs to mind is being off school for what felt like forever during the summer holidays, playing ‘down the track’, ‘on the strand’ and ‘out in Clonea’. I get home every Christmas and I’d be back once or twice then during the year, though not at the moment, of course.”

Like many Waterford boys of a similar vintage, Dermot loved comics, which in turn nourished his artistic aptitude.

“First of all, it was comics like ‘Topper’, ‘The Beano’ and ‘Dandy’ and then the war comics – ‘Warlord’ and ‘Commando’ (all were staples in the Keyes household too) along with some American superhero comics like ‘The Fantastic Four’ and ‘Batman’. Then ‘Action’ landed and promised something altogether different. That lasted about 10 minutes before it was banned and evolved into ‘2000AD’ which changed everything.”

Concept art from Dermot’s work on ‘Star Wars: Episode II’, some of which he has been revisiting during the lockdown with “real paint and brushes”. From: www.dermotpower.com

And just how significant was ‘Star Wars’ to Dermot during his childhood? “Huge. I was nine when it landed and I couldn’t believe what I was seeing. I loved everything about it – I even bought the soundtrack on Vinyl. Getting to work on the film was a dream come true.”

Working life kicked off in the comic book world for Dermot, including his beloved ‘2000AD’ (taking in ‘Judge Dredd: Book of the Dead’) and Sláine (‘Treasures of Britain’). Then in 1997, film work beckoned in the guise of TV mini-series ‘Merlin’, starring Sam Neill.

“I loved the Dredd and Sláine work of course but that was a period of my career when I was still very influenced by my artist heroes so it wasn’t fully ‘mine’, if that makes sense. Then along came ‘Merlin’. Two years later, Doug Chiang asked me to join Iain McCaig in the ‘Star Wars’ Art Department for ‘Episode II: Attack of the Clones’, mostly doing characters and costumes.” In his online biography, Dermot describes McCaig as “the perfect mentor for me at that stage in my career – teaching me that narrative/story is everything when designing”.

Doug Chiang, in the foreword to Phil Szostak’s lavish ‘The Art of Star Wars: The Rise of Skywalker’, defines concept artists as visual storytellers.

He writes: “We are designers, architects, cinematographers, costume designers, and set decorators; we are also researchers, historians, and world builders. Our art form encompasses a wide range of skills that can be hard to label under a single description. Concept art comprises the illusions that suspend disbelief and immerse the audience in the story.”

To have a Waterford man amongst such an enlightened, galaxy-creating troupe is something of a thrill: maybe Dermot’s success deserves a little more song and dance back home?

When asked what work he’s most proud of, Dermot replied: “It’s very difficult to say but there is a hint in that I am using the film industry lockdown to abandon my digital tools and pick up real paint and brushes again. So far I have been doing re-paints of my ‘Star Wars: Episode II’ concept designs – so they still mean a lot to me 20 years later.”

As a ‘Star Wars’ fanatic, as someone who liked to dabble in sketching as a kid, a hobby I’ve revived in my home office since March, touching base with Dermot and getting such a speedy reply from him was a real thrill.

The fact that I’ve been watching the movies again lately (in the best of company – the saga’s target audience – under 12s) and recently bought Phil Szostak’s splendid artistic record of Episode IX made our cross-channel correspondence particularly timely.

As for any unfulfilled ambitions of his, Dermot replied: “Designing a film – as in sitting in the Production Designer’s chair, guiding the design of a movie, I’d like to give that a shot. It’d be hard but I’d like to do it.”

To quote a vertically challenged Jedi Master: “No! Try not! Do or do not. There is no try.” Dermot Power’s career, from Hogwarts to Gotham City and onto galaxies far, far away, is testament to honing one’s talent and brilliantly running with it. Talk about a design for life.

Dermot’s stunning concept art for ‘Star Wars: Episode II’ is worth checking out on his website.