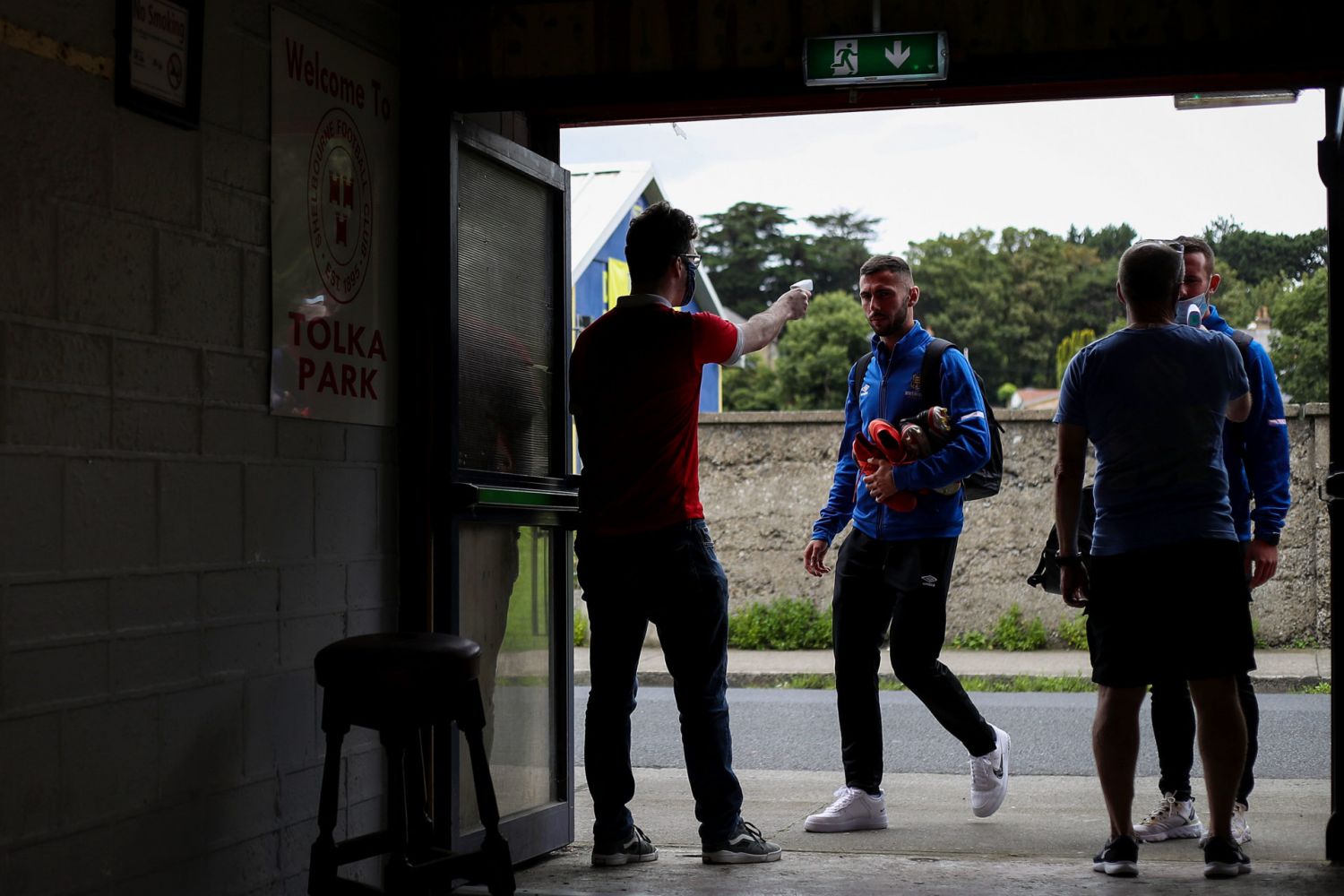 Waterford FC players have their temperatures taken as they enter Tolka Park before their win over Shels on Saturday. Photo: Inpho/Tommy Dickinson.

After their great win over Shelbourne at Tolka Park on Saturday in their first SSE Airtricity League game back after the lockdown, their game tomorrow night against Sligo Rovers has been postponed after a Blues player has presented with ‘flu-like sympstoms’ this morning.

The Blues squad and management were due to go to Sligo by bus today but that plan has now been scrapped.

Waterford FC have just issued the following statement: “At 8:45am this morning (Monday, 3rd of August), a player from our senior team reported to the club doctor with flu-like symptoms and has been sent for testing immediately. We are awaiting the results of the test however, until the results of the test are known, the club will cease all operations including training and staff meetings.
“Our Covid-19 management team will work in conjunction with the FAI and HSE to ensure that every precaution possible is taken. This may not be a confirmed case and we do not wish to cause any unwanted concern, however, the safety of the players, staff and public are of the utmost importance and for that reason, we will not be travelling to Sligo for our Tuesday fixture. We will continue to keep the public/media fully informed via our social media channels.”

It is understood the player didn’t feature in the win over Shels and became unwell after travelling with the squad to that game in the capital.

This is the first suspected case of coronavirus since the domestic league restarted last weekend.

Just a short time ago the FAI have released a statement announcing that tomorrow night’s game between Sligo Rovers and Waterford FC has now been postponed.

“The SSE Airtricity League has postponed the Sligo Rovers v Waterford FC game on Tuesday night after a Waterford player reported COVID-19 type symptoms ahead of training on Monday. The player did not train and Waterford FC suspended the training session and the player will now undergo a COVID-19 test.

“As a result of this suspected case, the SSE Airtricity League has postponed Tuesday night’s game pending the result of the player’s test. The player in question did not play against Shelbourne on Saturday but did travel with the squad. The FAI’s medical team will now review all aspects of this case before making any further decisions.”