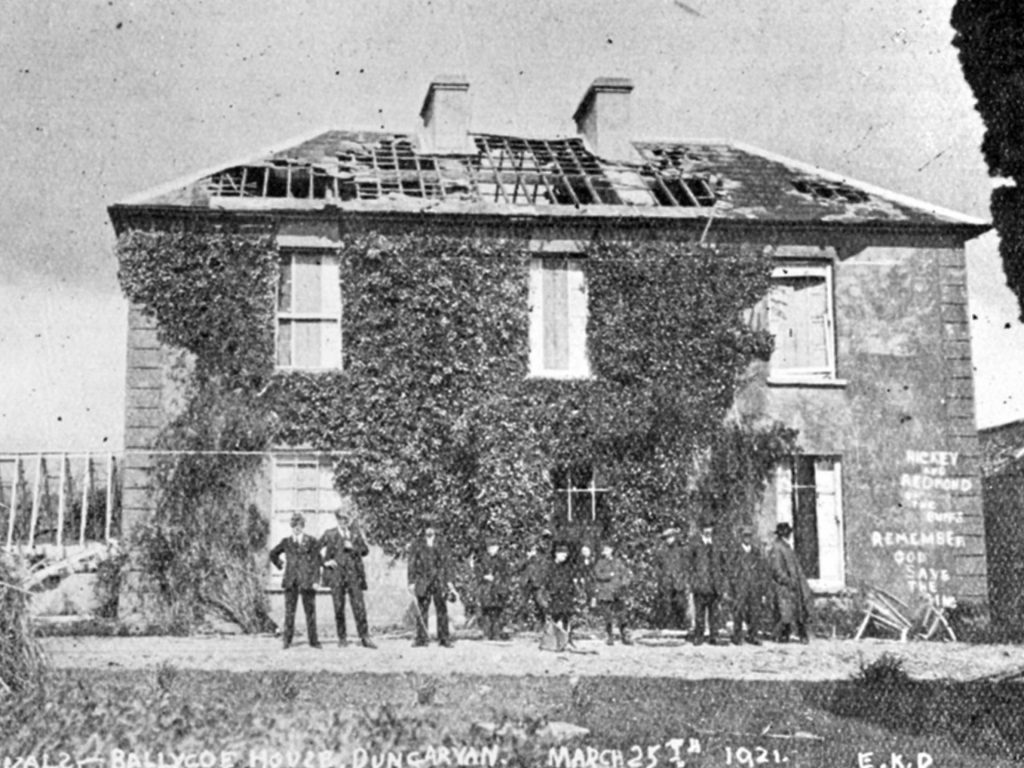 Dunlea’s house, Ballycoe, destroyed by the British military, Good Friday, March 25, 1921. Slogans were daubed on the walls by the military.

THE aftermath of the Burgery ambush outside Abbeyside saw two killed on each side. Pat Keating and Seán Fitzgerald on the Republican side, Constable Sydney Redman and Sergeant Michael Hickey from the Royal Irish Constabulary. The British forces were determined to exact revenge for the death of their comrades. In the immediate aftermath  they destroyed many business premises in Dungarvan, throwing furniture from the top windows into the streets below. Curfew from 7 o’clock in the evening till the morning was proclaimed in Holy Week, 1921.

A terrible week for Dungarvan saw an old deaf woman collecting firewood at Carriglea shot by the British military when she didn’t hear their challenge. The IRA shot a suspected spy William Moran, who was living in Lord George’s Lane (now Davis Street). Several homes belonging to Republican sympathisers were destroyed and in at least one instance women were seriously assaulted. Then came the night of April 12, 1921, described below by Edmond Keohan in his ‘Illustrated History of Dungarvan’. The photos are from the same publication.

Perhaps at no previous time were there more indications of the rule with an iron hand than now prevailed in Dungarvan. The whole object of the Government seemed to be to strike terror to subdue by force the spirit of the people. But all these efforts were borne in good part by the inhabitants. Sir Hamar Greenwood, the Chief Secretary for Ireland, was the ideal instrument in the hands of the British for the purpose, and when questioned in the House of Commons as to the actual happenings his replies were almost brutal in their callousness.

The military rule in the town and district was as rigorous as ever it was in the old days of tyranny, and what with the Black-and-Tans and the armed force, the police force did not much count, as they seemed to be entirely on the defensive, the incidents, which were of daily occurrence and were appalling in their character. In pursuance of this policy, the striking of terror, a body of Black-and-Tans paraded the streets, carrying with them a bucket of tar and a brush, and they daubed the walls of the houses here and there with such mottoes as “Up the Black and Tans”, “To H— with the I.R.A.!”, “Remember Redman and Hickey!” and several other wordings of a like description.

Even in some cases the shop fronts were smeared and the residents warned under the severest penalties not to attempt to clean off the nuisance. Still, under all this provocation, the people were passive in their demeanour and were careful to avoid anything that would be the cause of disturbance in their midst.

But on the night of the Abbeyside burnings there was great activity in the old Castle of Dungarvan. Martial law had been proclaimed. It was enforced with rigour, and the curfew was on. People were obliged to retire to their homes at an early hour. The streets were patrolled through the night by military, and wherever a light was seen burning in a house the door would be battered with the buttend of a rifle. Oftentimes loud knockings would disturb the sleepers, and one was almost afraid to put his head through the window to ascertain why there was any commotion.

But on the night of April 12, 1921, occurrences of the most alarming character took place. The tramp of armed men could be heard at intervals passing up and down the streets, and close on midnight Verey lights of much brilliancy were sent off from the Castle. The direction in which they were shot was chiefly towards Abbeyside. These firework displays followed one another with unusual rapidity, and only from the cover of their windows could the people see any indication of what was happening, but the brilliant illuminations led them to surmise that something of an unusual character was taking place, and events of momentous import must have been under way. No one could venture out. It might be death to do so. All that could be discerned was the Verey lights streaming through the sky and throwing a shower of brilliant flare on the landscape.

Not till the morning were people able to glean what this was all about. But with the coming of the day it was learned that many of the houses in Abbeyside had been fired and destroyed by the Black-and-Tans. It was alleged, at all events, that they were the perpetrators of the burnings, and from the stories told in the morning one could gather the sort of horrible night that had been spent by the inoffensive people of Abbeyside. 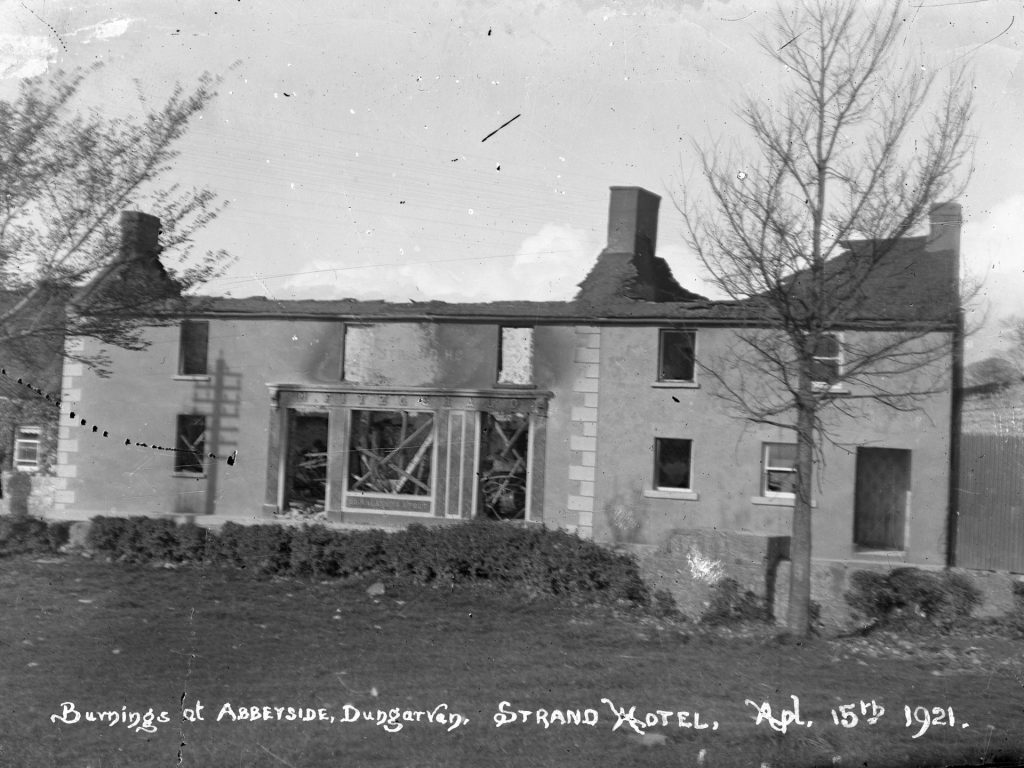 From an examination of the happenings, the aspect of Abbeyside was truly pitiable. Fitzgerald’s fine business house, the “Strand Hotel”, was a mass of charred ruins. So also was the house adjoining, Mr. T. Fahey’s fine business house, on which he had expended a lot of money in improvements, was completely gutted, and the houses alongside were completely destroyed. Tales of horror were told by the people.

In the case of Mrs. Fahey, whose husband was in prison at the time, arrested on suspicion, she escaped with her infant child over a high back wall, and the wonder is her courage had not failed her, for she was in fear of death.

Miss Fitzgerald stood the ordeal with commendable bravery, and not many could hold out as she did at the sight of her fine premises being consumed in flames. Stories were told of soldiers running and firing, of Verey lights flaming in the sky, of the petrol can being used freely, and the flames of the buildings rising in the air the crackling of the timbers and the falling of the walls adding fresh horrors to the weird proceedings. It was a night of terrible suffering, and its harrowing incidents will be told at the firesides of this peaceful suburb for many generations yet to come. Happily, when calmer reason prevailed compensation was given to the sufferers, but scarcely any money consideration could pay one adequately for the ordeals they had gone through on that eventful night. 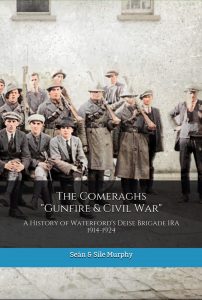 Written by Seán & Síle Murphy and originally published in 1980 under the title ‘The Comeraghs, Refuge of Rebels’, the book ‘The Comeraghs “Gunfire & Civil War”: The story of the Deise Brigade IRA 1914-1924’ is the seminal study of the war in Waterford. It was compiled using the first-hand accounts of the local veterans who participated in the struggle for Irish Independence. The 2020 edition, edited by Willie Whelan for Waterford County Museum and the Waterford Commemorations Committee, has been republished to mark the centenary of events in 1920. It has been updated with additional content, including notes from the original interviews and 31 photos.

The paperback (€18.50) and eBook (€9.10) are available to buy online from Amazon http://mybook.to/comeraghs or search for “comeraghs” on Amazon. To see the range of local history books published by the museum search for “Waterford County Museum” on Amazon. Profits go towards supporting the museum.