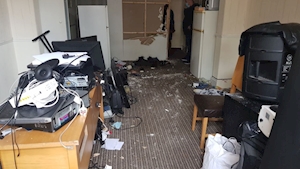 The Irish Council for Civil Liberties (ICCL) is demanding answers from the gardaí about the presence of officers at an eviction in Dublin’s north inner city yesterday.

The ICCL says gardaí seem to have played a “supportive role” when the residents were removed from the house.

Meanwhile, Inner City Helping Homeless has claimed it was carried out illegally and stepped in to provide emergency accommodation for the nine tenants.

ICCH chief executive Anthony Flynn says the house has been badly damaged and needs to be repaired before they can move back in.

“The toilets were smashed, the electricity was switched off and there were doors that were pulled off.

He said there is now a call out for carpenters, plumbers and electricians to get the property back into a livable condition.

“Everybody seems to have scarpered who did it and they left the volunteers here to try and put the property back together,” he said.

According to Mr Flynn, after taking legal advice today the property had been repossessed.

He stated that some of the tenants have been living in the building for a number of years, so they are trying to give them their home back.