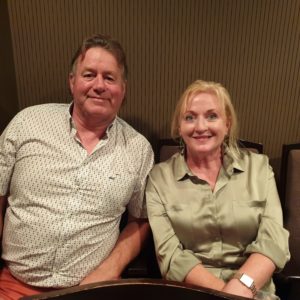 “I HATE phukin’ musicals,” declares dairy farmer Pontius Ross (the wonderful Pat Kinevane) from Laois where he milks a herd of some eighty cows. He’s got history here. His father Maurice made sets for their local musical society and sometimes ghost-sang numbers from the wings while his mother made the costumes.

When a car crash on the way home from a musicals festival in Letterkenny, beside Drumcliffe Cemetery in Sligo, where Yeats’s horseman is cautioned to ‘cast a cold eye on life, on death’ before passing by, robbed him of the two people who loved him most, he felt that musicals had betrayed him.

And yet…and yet… it is to the world of the musical that Pontius returns for solace from the pain of this world he endures. Singing snatches of reworked songs from the lexicon of musical theatre; acting and dancing iconic roles from South Pacific to Chicago on that trademark Kinevane Spartan black-and-white stage, where a handful of props stage-manage a Vaudevillian world of showbiz, Pontius exorcises his pain.

There’s a helluva lot of backstory going on here from the boy who learned his tables listening to Oklahoma and it’s not too good. The small print on the ticket of Pontius’s life betrays him. Orphaned at a young age, burdened with an isolated farm to work, reared by a neighbour whose nickname is the Crone, reduced to communication with the bees, his only night of passion ends in disaster.

Lying on a bed of bubble-wrap that pops all night, passion with Felicity was wonderful and comic but the sequel becomes a nightmare as she contrives to bar him from seeing his daughter from the age of four. But, today is Astor’s 21st birthday and she has asked to see him and they’re to meet under Clery’s Clock on the day the receivers move in.

It’s an hour to their meeting and Pontius is here to buy her a present and roll back the years of hurt and longing for the child he adores. Astor is her name – from the Gaelic ‘a stór’ (loved one) – and he caresses the name when he speaks it. When the hurt pours out, it’s never pretty as he screams Felicity’s betrayal – the Rottweiler with lip-gloss.

He finds comfort by escaping into the fantasy cinematic world of musical theatre where it’s always alright on the night. He dreams himself an existence every day with Pontius and his  own Astor cast as hero and heroine of their very own mythology. He showreels it on an endless loop in the theatre of his mind and shares it with us through the only medium he knows – the musical.

“I hate phukin’ musicals,” screams Pontius because he realises that it’s all fake – the characters that never betray, the love that’s instant and the story that always turns out the right way.

Kinevane is an incredibly physical actor and moves across the stage like a Giselle. His Pontius Ross combines the gauche awkwardness of a rural recluse with the poise of a trained dancer. While front-set white footlights cast huge back-wall shadows and capture the feel of music-hall theatre, Pontius taps, drags, twirls and waltzes his way around the minimalist set like a Gene Kelly or a Fred Aistaire. And he’s got the songs and the voice to go with the dances. Composed by Kinevane, the songs parody the content of the iconic ballads but their execution is every bit as polished as the original.

The innate sadness of the piece is never far from the plotline. Bullied by an offstage insensitive security guard, mocked by a voice-over PA announcing offers on wedding dresses and seductive lingerie, an incredibly moving final waltz with a white flowing dress that simulates his daughter preludes his meeting with Astor.

I won’t reveal what happened next because this show will return.

But… I… gasped… at the ending. 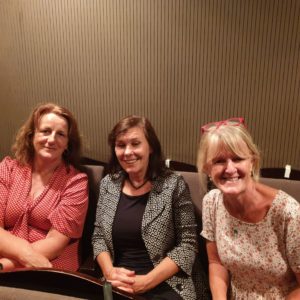 First-nighters Maria Begadon, Sharon Walsh and Stephanie Power at the re-opening of the Theatre Royal.

And… yes… it was a different Royal to the one we’re used to. Manager Mary Boland beamed smiles and bumped elbows with the arriving audience; Box-Office Manager Anoushka Joyce indicated our ticketless-seats and we all bathed in the warmth of our love for the old house on the Mall.

I thought of all those people that had done so much to hold onto this iconic Waterford jewel that have passed on and I could feel their presence in the house. Living… breathing… laughing.

Everyone smiled and Pat Kinevane’s performance drew rounds of laughter, applause and comment. The bond between performer, audience and theatre could not have been stronger at Pat’s final curtain.

It’s a beginning… gentle… nervous… hesitant. But it was out there. Theatre was back and we were all part of the magic of performance.